No use hiding your age: Scientists develop an eye scanner that can detect and track biological ageing in humans for the first time by analysing proteins in their lenses

By Ryan Morrison For Mailonline

A ‘game-changing’ eye scanner that can detect someone’s biological age by examining the lens of their eye, has been developed by scientists.

There is no universally accepted measure of biological ageing, according to the Boston University School of Medicine team, who built the scanner.

The new, non-invasive technology, will allow researchers to find out someone’s ‘true’ or biological age, rather than how long they have been alive.

According to the researchers, chronological age – how long you’ve been alive – does not adequately measure the rate someones body is actually ageing.

They say that by knowing someone’s biological age, and being able to track it throughout their life, can help in improving medical care.

There is no universally accepted measure of biological ageing, according to the Boston University School of Medicine team, who built the new scanner

Numerous ageing-related measurements have been proposed and tested, but no marker to date has been identified nor any non-invasive method developed that can accurately measure and track biological ageing in individuals.

Biological age could be different to the chronological age in a human as it considers diet, activity levels and whether someone smokes or not, authors say.

The new study found that a specialised eye scanner that measures signals from proteins in the lens of the eye can detect and track biological ageing.

Corresponding author Professor Lee Goldstein, said the absence of clinical tools to evaluate how each person ages has held back the understanding of ageing.

BIOLOGICAL AGE CAN BE DIFFERENT TO HOW LONG YOU’VE LIVED

Chronological age is a simple measure of how long you have been alive.

However, researchers say this doesn’t show how ‘old’ you are, particularly how worn out your cells might be.

To do this you need to find someone’s biological age, which includes factors such as diet, exercise, general health  and whether you drink or smoke.

Someone who eats fatty food and barely moves will have an older biological age than chronological age.

He said it was important to be able to quantitatively evaluate how each person is ageing at the molecular level to better maximise their health throughout life.

‘The lens contains proteins that accumulate ageing-related changes throughout life.

‘These lens proteins provide a permanent record of each person’s life history of ageing. Our eye scanner can decode this record of how a person is ageing at the molecular level,’ Goldstein said.

The researchers believe these results pave the way for a potentially game-changing clinical tool for assessing and tracking molecular ageing in people.

Goldstein, who also holds an appointment at Boston University College of Engineering, said work was progressing to create uses for the tool.

‘The framework for clinical implementation of this technology to measure molecular ageing is similar to other recently adopted clinical biomarkers,’ he said.

‘While large test batteries incorporating composite metrics have been developed to track human ageing, these are far removed from underlying molecular mechanisms of ageing and are ill-suited for personalised longitudinal medical care,’ he said. 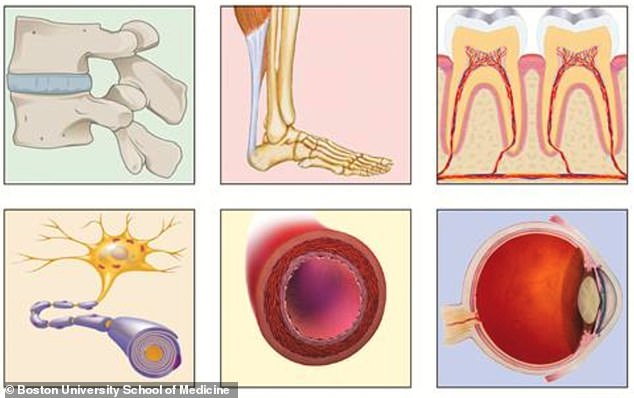 The team say that certain proteins found in the human body – including collagen, nuclear pore proteins and cytosolic proteins remain in the body throughout life and these can help identify the true biological age of a human

‘By contrast, eye scanning technology that probes lens protein affords a rapid, non-invasive, objective technique for direct measurement of molecular ageing that can be easily, quickly, and safely implemented at the point of care.

‘Such a metric affords potential for precision medical care across the lifespan.’

The specialised eye scanner accurately measures spectroscopic, or electromagnetic, signals from proteins in the lens of the eye.

The team say doing so allows it to detect and track biological ageing in living humans as these proteins are present from birth.

The findings of the study were published online in the Journal of Gerontology: Biological Sciences.

Stacey Hampton puts on a leggy display as she shows off her latest designer...

Snezana Wood flaunts her trim physique in a string bikini as...

NASA scraps test for most powerful EVER rocket that will take...

Up to 30 Plymouth teenagers may have brought Covid-19 from Greek...