Shocking footage appears to show a police officer being punched in the head as he wrestles a suspect to the ground in East London this afternoon.

Passersby could be seen posing for selfies as the officer and suspect rolled around on the pavement in Hackney.

As the suspect shouts, a group begins to gather and film, before another man arrives carrying a baseball bat.

Shortly after, footage shared online appeared to show the officer being punched in the head. 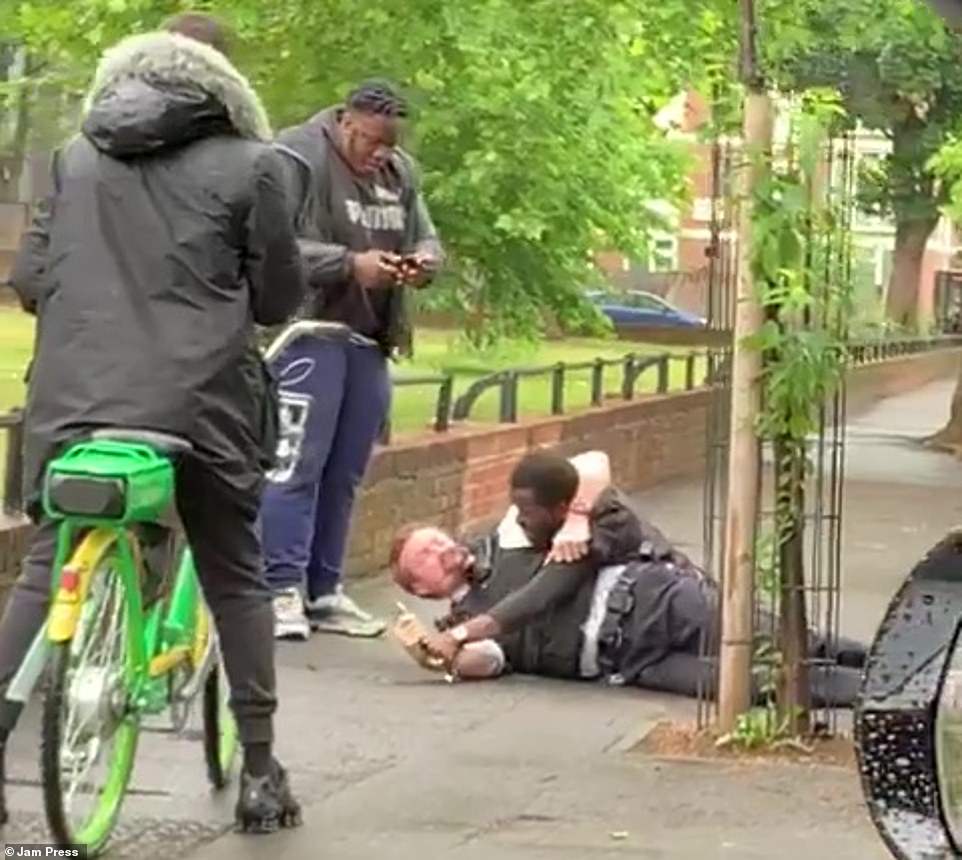 Passersby gathered around the officer, while his wrist was pinned down as held on to a pair of handcuffs

Home Secretary Priti Patel has condemned the attack, describing it as: ‘Sickening, shocking & disgraceful. My thoughts are with the outstanding officers who were subject to this disgusting violent attack.’

Two officers were responding to an assault just after 3.30pm today after they were flagged down by a member of the public. According to Met Police, the victim pointed out their attacker and officers went to speak to those involved.

A Met Police spoksman said: ‘As an officer attempted to speak with those involved, one of the men resisted and a struggle ensued. A number of other people became involved whilst the officer was on the ground.’

The first video shared online shows a uniformed officer with his arm around a suspect’s neck.

He appears to try and throw the suspect to the ground, but instead they both end up on their backs.

As the officer calls for backup, the man he was trying to detain repeatedly shouts ‘Leave me the f****** alone,’ while holding one of the officer’s hands. 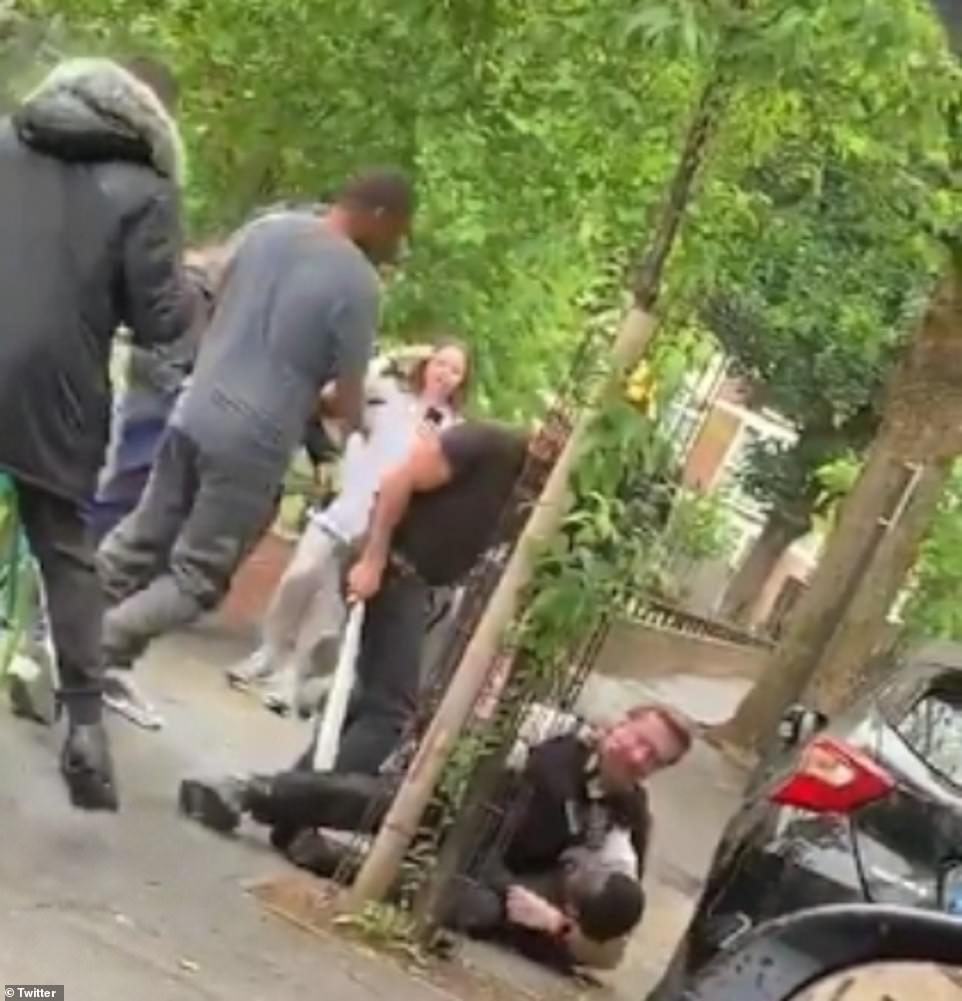 One man charged toward the altercation in Hackney, East London, carrying a baseball bat. Moments later the officer was punched in the back of the head 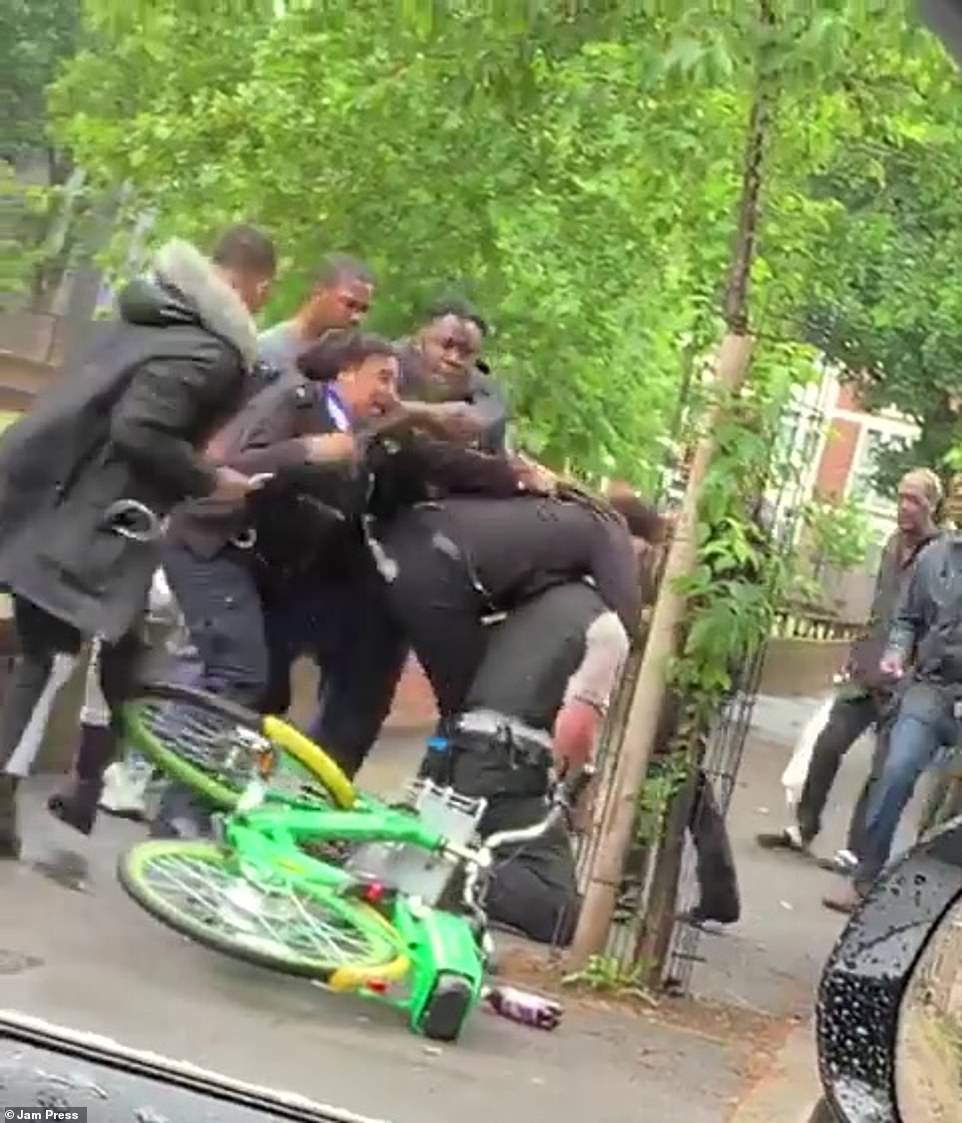 As the officer gets to his knees, one of the crowd appears to place him in a headlock, while a second officer at the scene tries to intervene

Seconds later, a punch appears to land on the back of the officer’s head, who is still on the floor.

As one member of the crowd leans over to shout at the officer, a second police officer arrives at the scene and screams at the crowd to ‘get back’. 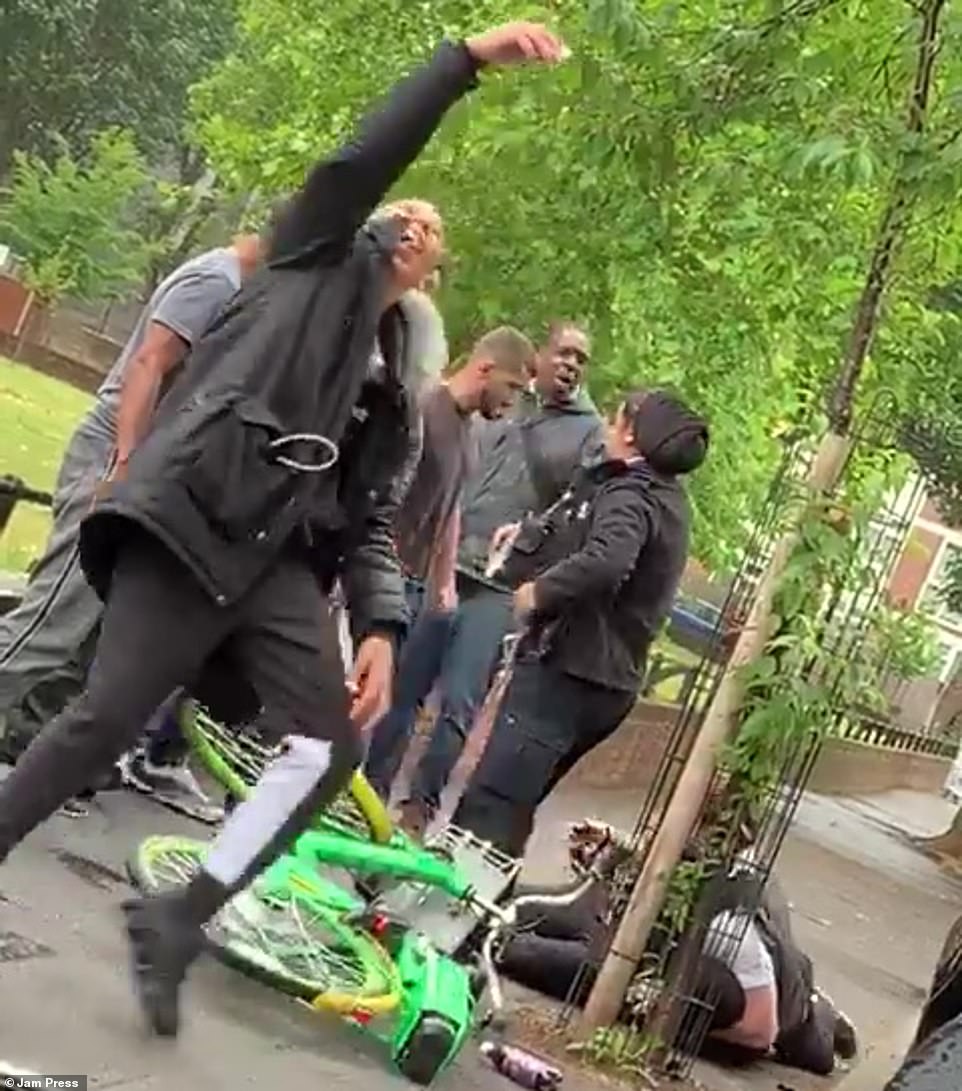 With two officers at the scene, one member of the crowd dances as he takes a selfie of the scene, which was described by one officer as an ‘horrific attack’ 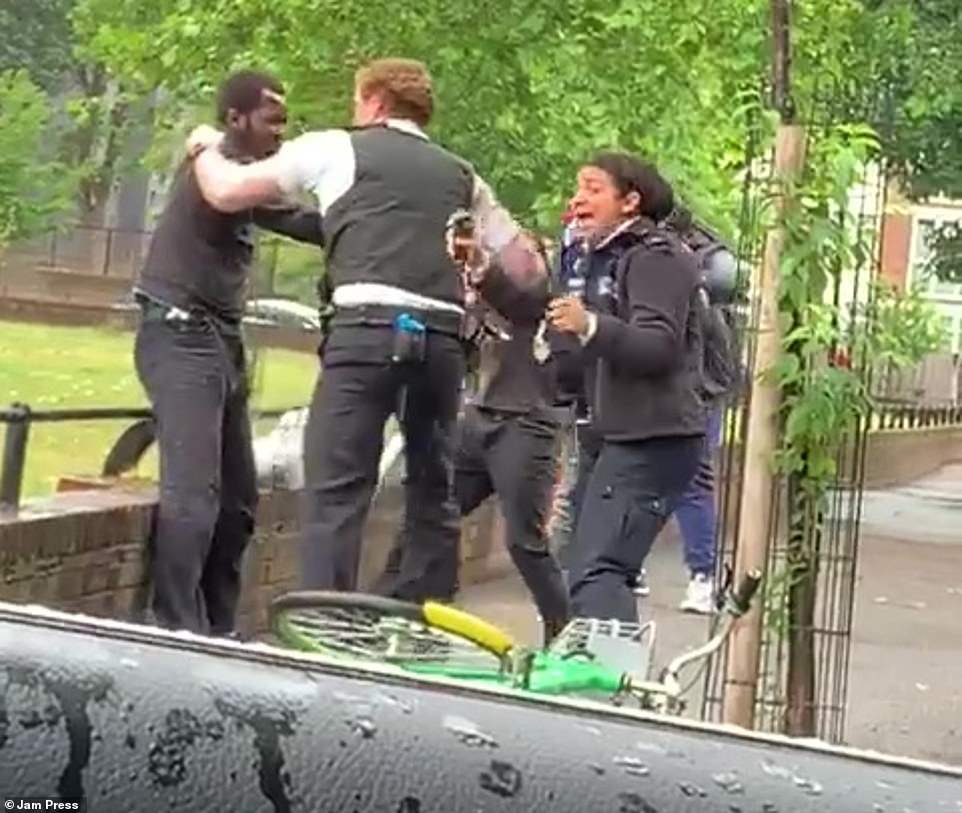 Home Secretary Priti Patel described the footage from Hackney this afternoon as ‘Sickening, shocking and disgraceful’. Footage from East London appeared to show an officer being punched in the head as he wrestled a suspect to the ground

When she attempts to push a member of the crowd away, he grabs the officer’s arms.

One of the crowd then dances in front of the altercation, while appearing to take a selfie.

Chief Supt Roy Smith tweeted this evening: ‘I can confirm colleagues are aware of this horrific attack on our officers simply doing their job to protect Londoners.’

Both officers suffered minor injuries but did not require hospital treatment. Two men, aged 20 and 38, were arrested on suspicion of assaulting a police officer.

Both men remain in custody at an East London police station.

Superintendent Martin Rolston, from the Central East Command Unit, said: ‘This incident, which was captured on someone’s mobile phone is truly shocking.

‘My officers went to the assistance of a member of the public – who asked for their help – after stating that they had been assaulted. What happened next is a reminder of the risks our officers take whilst going about their duties.

‘It is fortunate that their injuries are not more serious. There is no place for this level of violence on our streets.

‘We are engaging with our community partners to discuss what happened and I hope that anyone who witnessed what happened comes forward and speaks with us.’

Anyone with information is asked to call police via 101 quoting reference Cad 4315/10Jun.

Jacinda Ardern dons a hijab as she unveils a memorial plaque for the Christchurch...

Trump takes aim at China accusing it of ‘mass worldwide killing’ by ‘incompetence’ over...

Tommy Robinson is released on bail after being arrested for ‘punching...