Don’t int-erupt! Daredevil friends dodge lava bombs while crossing an active volcano on a tightrope to set a world record

Two adrenaline junkies have set a world record by walking the first slackline over an active volcano.

Alexander Schulz, 28 and Rafael Bridi, 33, crossed the crater of the Yasur volcano on Tanna Island, in the southwestern Pacific Ocean – walking on a one inch wide strip of webbing.

The volcano is among the most active of its kind and is considered unpredictable due to its frequent eruptions and lava bombs.

The pair set a new Guinness World Record on April 15 this year during the pandemic.

They have shared the stunning images which show the flames and smoke as they walk across the 853ft (260m) long line which is not only the longest, but also the first slackline over an active volcano.

Alexander Schulz, 28 and Rafael Bridi, 33, crossed the crater of the Yasur volcano on Tanna Island, in the southwestern Pacific Ocean – walking on a one inch wide strip of webbing

The pair said the lava bombs – which are 400m high and several hundred degrees hot – as well as the sulfuric acid, which threatened to damage the slackline material were the greatest difficulties during the stunt itself.

Alexander said: ‘We had to contend with very strong winds, practically a storm. There was no thinking about going through in one go, it was pushing me even closer to the crater. Never before had I been so close to a force of nature!

‘The feeling of being completely at the mercy of mother nature reminds me of that time I walked a 650m long nylon line in the Auvergne, in an attempt to cross an extinct volcano during 100 km/h winds.

‘I had no choice but to accept the fear and concentrate on breathing. The biggest difference however is that on an active volcano, there is the additional threat of catapulted glowing rocks. 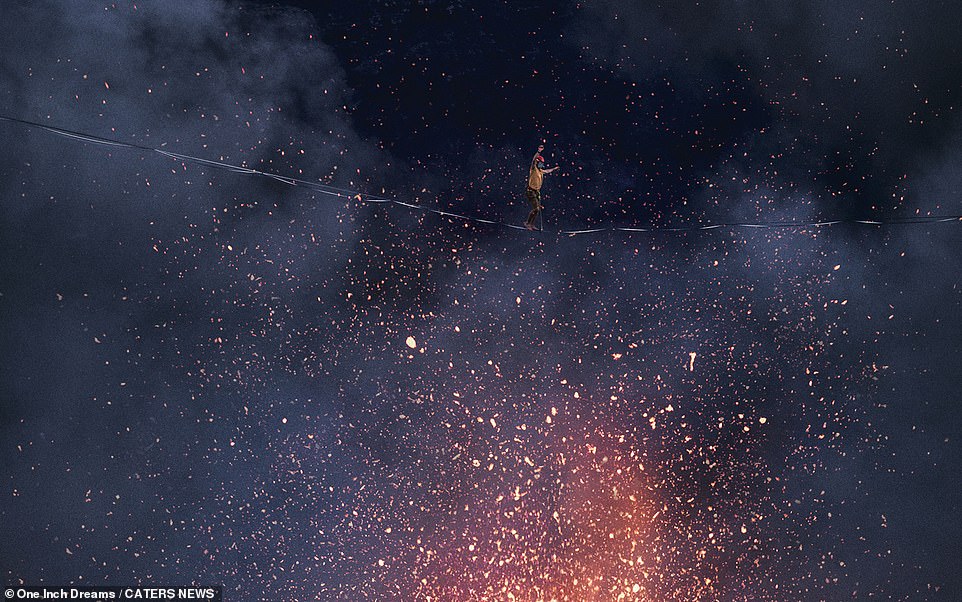 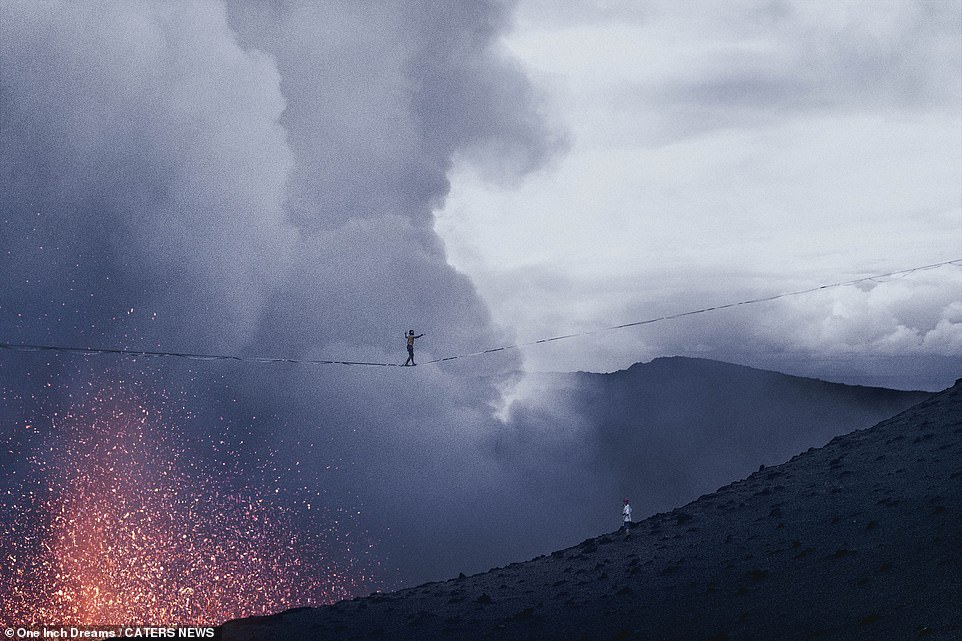 ‘It felt like they could have hit me at any moment, though no boulder landed closer than 50m away from me. With every roar of the volcano my pulse stops for a short time, only to beat faster afterwards.

‘The erupting red-hot lava fountains and the mighty ash clouds almost put me under a spell. Sometimes I couldn’t help but stand still and watch the spectacle. It feels unreal to experience this, almost like a dream.

‘At the same time, I felt more alive and present than ever before in my life in the face of this force of nature. 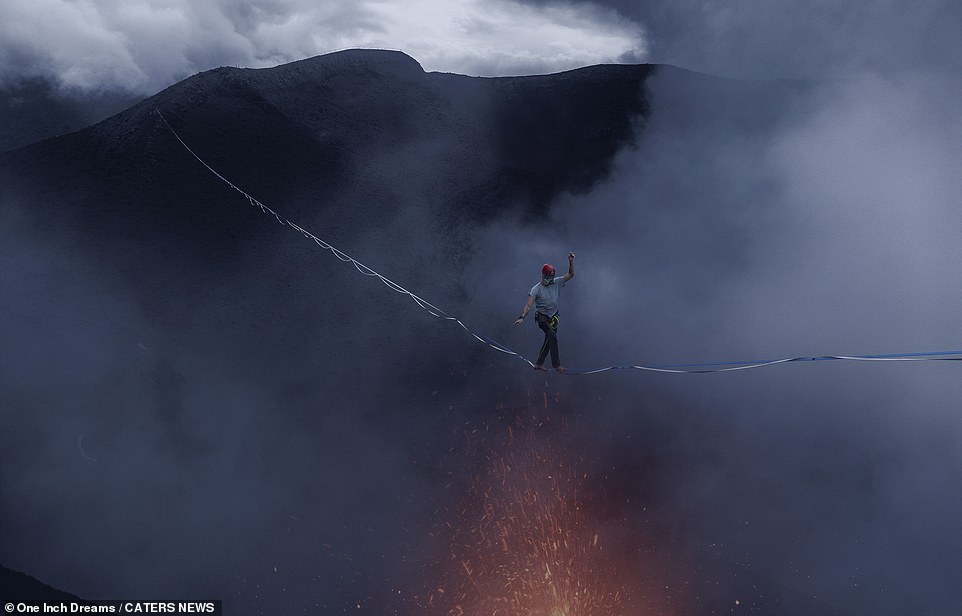 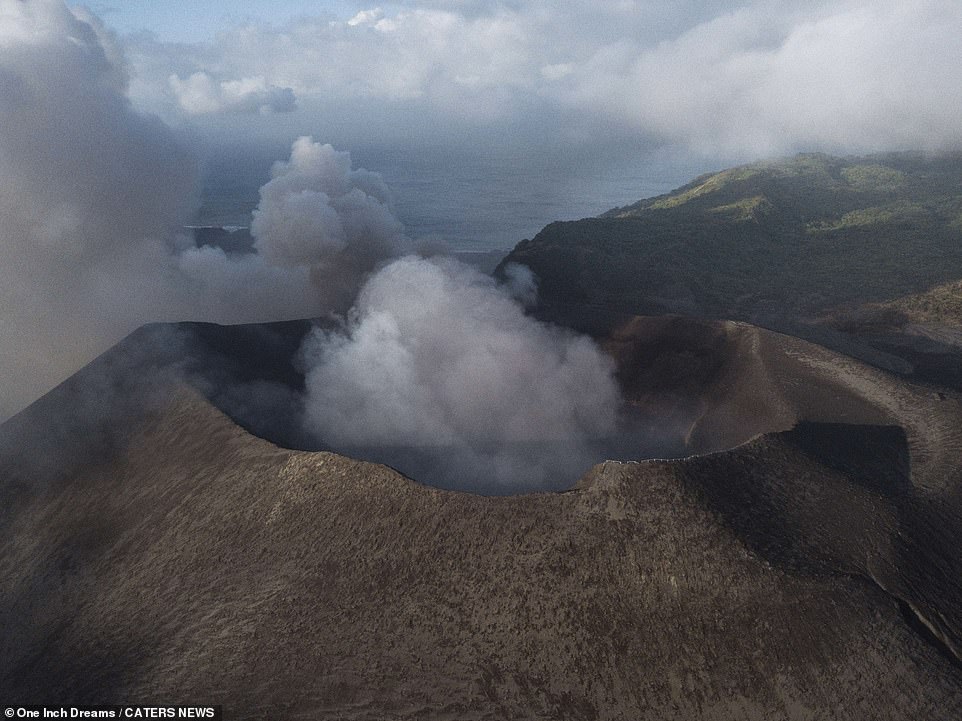 The production company One Inch Dreams accompanied Alexander Schulz and his father to the other end of the world: the volcanic island of Tanna in the South Pacific state of Vanuatu (pictured)

‘Everything has been captured on film – five minutes after my crossing the clouds burst and a downpour washes everything out. At this point it doesn’t matter anymore if the material gets wet. The timing feels like fate.’

Johannes Olszewski, director and producer of LavaLine, was deeply impressed by the remoteness he experienced in the Pacific island state: ‘I was not aware that untouched places like this still exist today. The incredible hospitality and rich culture. What a blessing to be stranded in such a paradise in times of global crisis and uncertainty’.

Further details & pictures about their adventure can be found at oneinchdreams.com/lavaline.

The documentary of their journey will be released this Autumn.

Colton Underwood looks like a total catch as he sunbathes shirtless

Coronavirus HAS mutated: Strains that evolved to be far deadlier have...