Places of worship across the UK reopened for private prayer on Monday with worshipers sat in socially-distanced pews and clergymen wearing personal protective equipment – but weddings and full services are still not allowed.

The government gave approval for church buildings to open up for supervised individual prayer for the first time since they closed their doors on March 24, as part of a wider easing of restrictions that has seen non-essential stores also reopen.

This has has seen the collapse of social distancing at Nike’s flagship store while outside Primark some slept outside or arrived before dawn to be first in amid huge queues at shops across the UK. 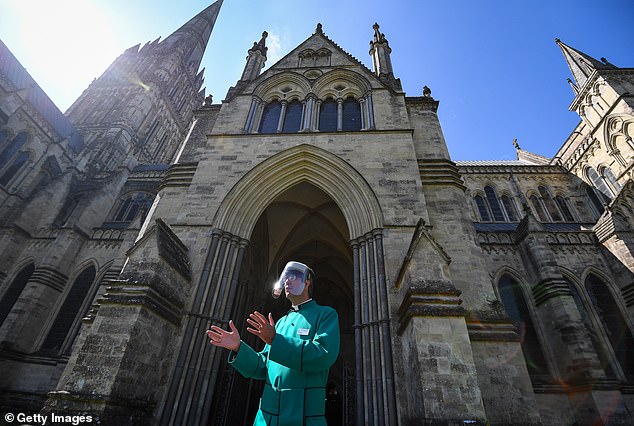 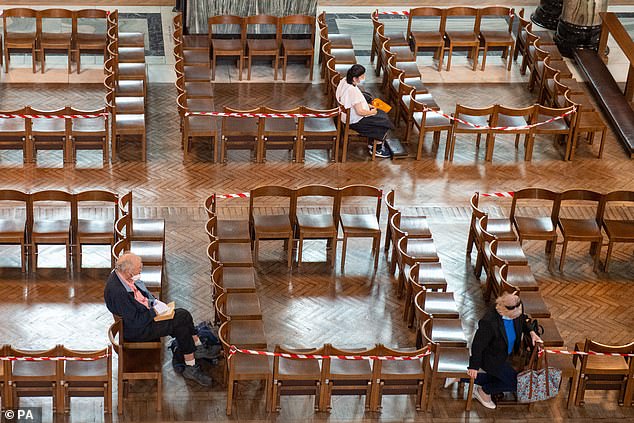 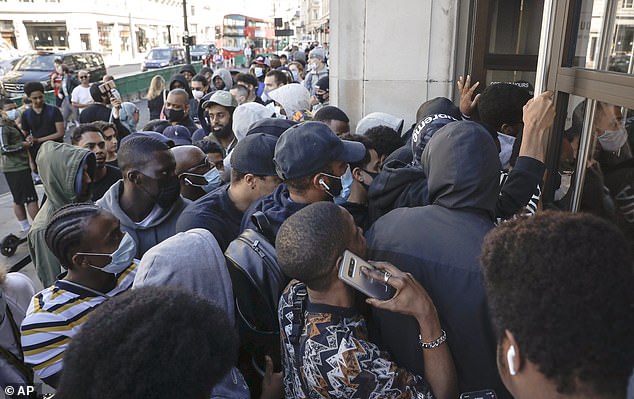 Customers, many not wearing masks rushed to enter the Nike store in London as it reopened

What can churches offer?

Only individual prayer is currently permitted in church buildings.

What safety measures are in place?

Signs are placed on doors and hand sanitizer has been made available.

Can prayer books be left out?

The Government guidance is clear that books should not be left out.

What about lighting candles?

The lighting of candles with reusable lighters or similar should not be encouraged.

New rules on wearing face coverings on public transport have also come into effect, while Years 10 and 12 pupils have returned to class and EasyJet have resumed some flights – amid World Health Organisation warnings over easing too quickly.

The Recovery Group, set up by the Church Of England to guide the reopening of its churches, said in guidance issued to its churches:

‘Only individual prayer is currently permitted in church buildings.

‘No public worship, streamed or otherwise, should take place whilst the building is open to visitors.

‘The includes stressing the critical importance of using the hand sanitizer.

This is for both going in and going out of the church building.

‘Supplies of hand sanitizer should be available in the porch/inside the main door (or water, soap and paper towels).

‘You should consider whether there is anything you can do in terms of seating to enable physical distancing.

‘For instance by marking places where people can sit or removing some chairs for churches with movable seating.’ 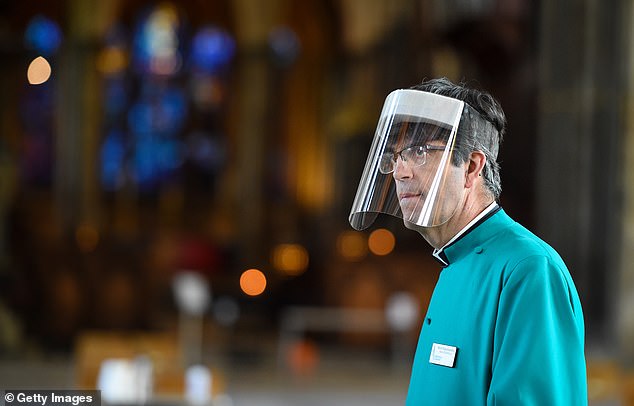 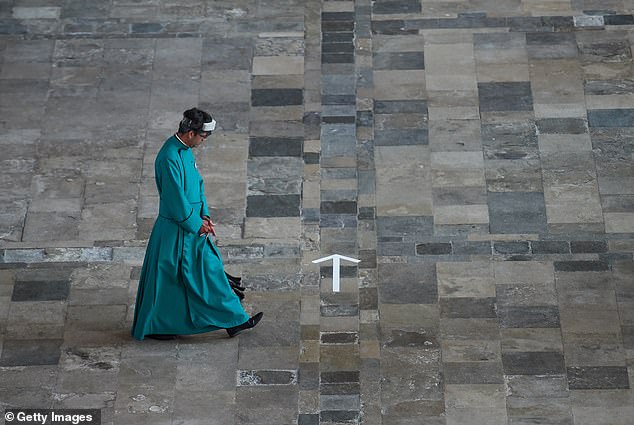 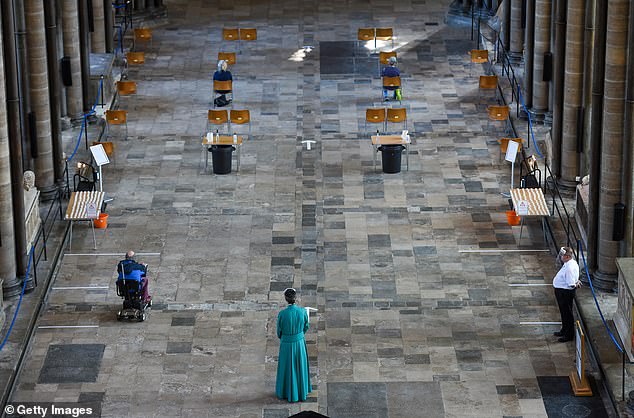 Communities Secretary Robert Jenrick labelled opening places of worship as a priority because their ‘contribution to the common good of our country is clear’.

He said: ‘People of all faiths have shown enormous patience and forbearance, unable to mark Easter, Passover, Ramadan or Vaisakhi with friends and family in the traditional way.

‘As we control the virus, we are now able to move forwards with a limited but important return to houses of worship.’ 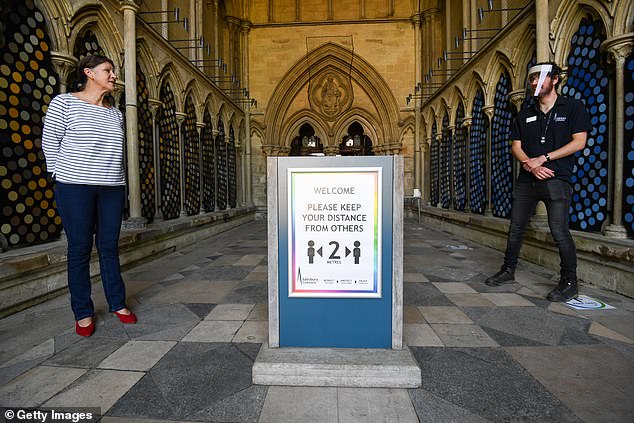 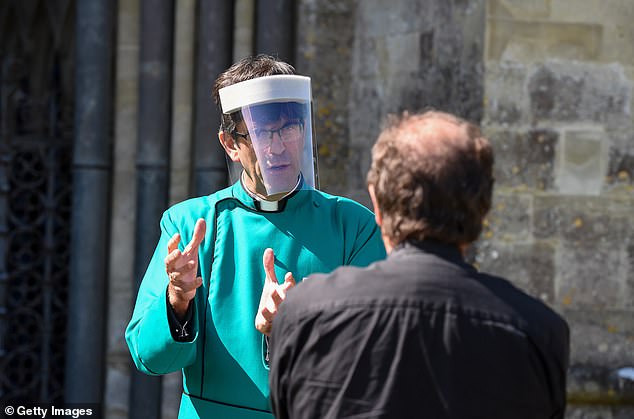 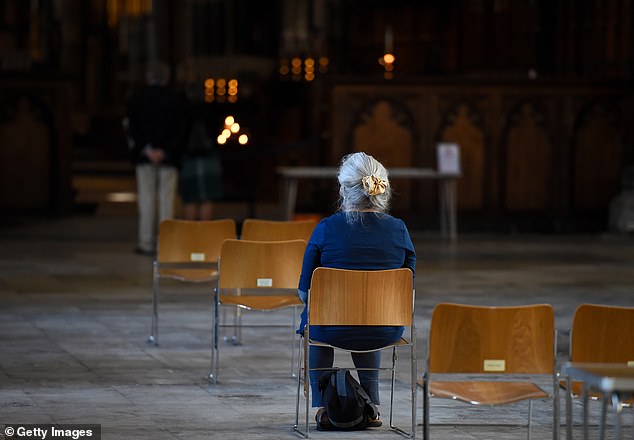 Despite the new rules, several places of worship – including mosques – have been advised by their faith leaders not to open.

This is largely down to ongoing concerns about maintaining appropriate safety measures inside the buildings.

Suleman Nagdi, the spokesman for the Federation of Muslim Organisations said: ‘We are of the view that the decision does not go far enough in accommodating the religious requirements of the Muslim community and other faith groups for whom a Mosque or a public place of worship’s primary purpose is to facilitate led congregational or communal prayers.’ 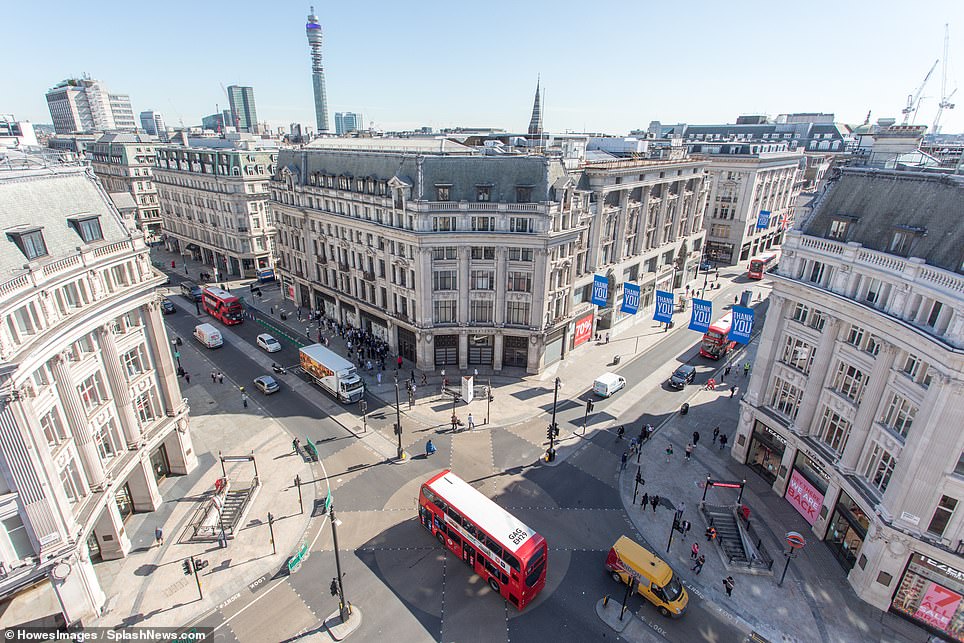 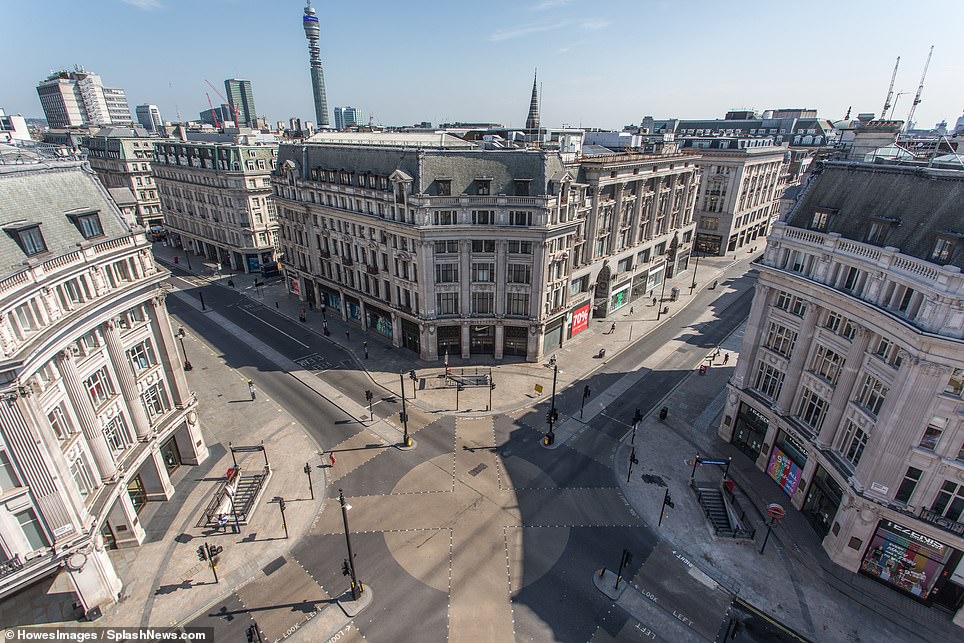 Spot the difference: The junction of Oxford Street and Regent Street as shops opened again today – slide to see it empty in April after Boris Johnson imposed lockdown 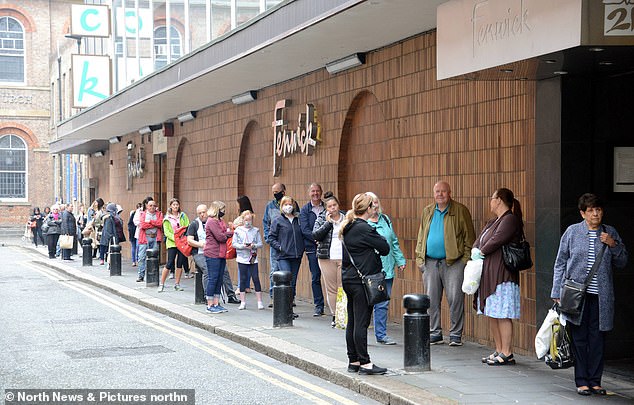 The move to allow places of worship to reopen comes as other restrictions are also eased across the UK.

Tens of thousands more people also flooded on to public transport as masks became mandatory and secondary schools welcomed students for the first time in more than three months this morning.

Shoppers desperate to hit the high street formed huge socially distanced queues after dawn today as the majority of stores reopened this morning – but it was so busy at the Nike store on Oxford Circus it opened an hour early as the two-metre rule went out the window when people jumped the queue and tried to force themselves through the door. 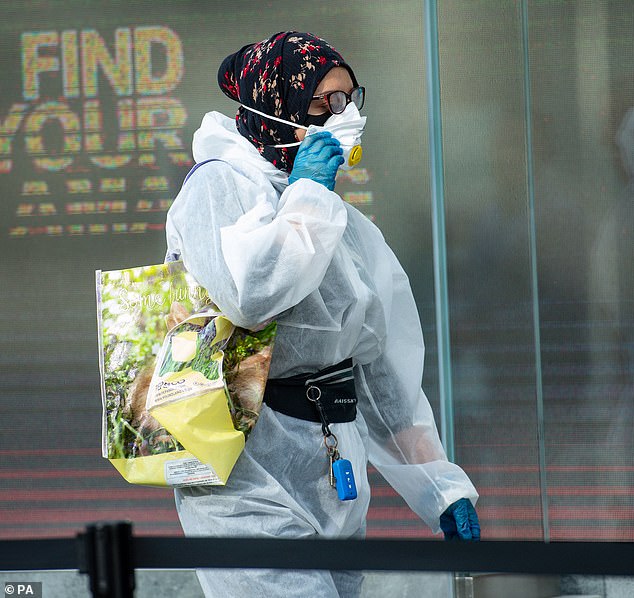 Tom Jackson, 19, was hoping to buy some Air Jordan 1 trainers, told MailOnline: ‘The problem is that people have been pushing in. We’ve seen a few people jump the queue at the front, which isn’t really fair. It’s been a bit chaotic to be honest. I’m not very impressed.’

His sister Anna added: ‘We are trying to observe a two metre distance from everyone else but it’s proving impossible because if we do leave a gap, people start pushing in.

‘We have face masks on, as do most people in the queue, but it can’t be good for us to be grouped together so closely when we are still in a pandemic.’

Fishermen create mesmerising patterns as they trawl for anchovies in Vietnam

How TikTok could help you survive the Covid-19 lockdown

Japan has ‘some suspicions’ about health of Kim Jong-un and his...

Flares of light are seen coming OUT of a black hole...

Make an escape to the country pay: Homes with businesses attached

Don’t be the loser who only opens his Isa at six...