By Chris Jewers For Mailonline

A doorbell camera captured the moments when a man in Brooklyn started two fires inside a 24-story apartment block last week on two separate days.

Yevgeniy Kotlyarov, 38, has been arrested by Fire Marshals for arson, allegedly starting two fires in the building, one on June 11 and another on June 15.

Kotlyarov used to live in the building and had previously had disputes with other occupants on the same floor that he set fire to, law enforcement sources told the New York Daily News.

Reports also suggested that he had written graffiti on the wall accusing another resident of being a ‘child rapist’ according to the news outlet, although the sources did not corroborate this with the Daily News.

In the first video, the man could be seen lighting an object on fire and throwing it down the corridor, which was then set alight

Both incidents in the building on 2780 West 5th Street in Brooklyn were caught on camera, leading the Fire Marshals to the man. The videos were shared by the FDNY along with a press statement.

‘I commend our Fire Marshals for their outstanding investigative work to apprehend a suspect who twice showed a callous disregard for the lives of New York City residents and our Firefighters by starting fires in a building occupied by hundreds of people,’ said Fire Commissioner Daniel A. Nigro in the statement.

‘Using fire to hurt others or destroy property will not be tolerated in our city,’ he added.

A doorbell camera caught both fires. In both instances, the man could be seen going through the door, pictured on the right halfway up the corridor

On June 11, Kotlyarov is alleged to have set fire to the hallway in front of two apartments on the seventh floor of the building at around 6.30 p.m.

In the video from June 11, a man – allegedly Kotlyarov – can be seen poking his head out from a doorway while wearing a mask, before back through the door.

Some seconds pass before the man reappears and throws a flammable object on the floor outside two doors, one of which has the doorbell camera on it.

The flames light quickly, spreading in front of the two doors, filling the corridor with smoke. The speed at which the flames spread suggests something combustible was already present.

In this freeze-frame from the incident on June 15, the man can be seen going through a door after setting the corridor ablaze 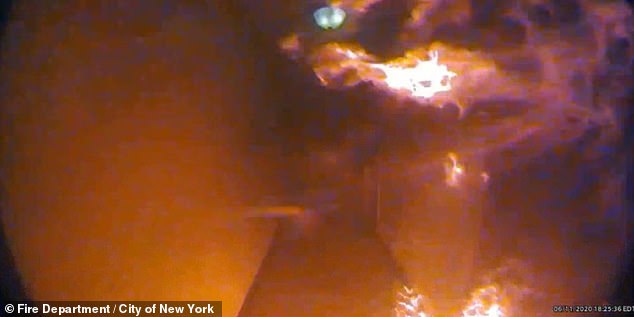 Flames engulfed the camera and filled the corridor with smoke. In both incident, one resident suffered non-life threatening injuries from the first. In the second, a fireman was also harmed, but not critically

In response, 20 units and more than 80 FDNY members were on the scene to get the fire under control, with one resident and one firefighter suffering non-life threatening injuries.

In the second video, as the footage begins flames can already be seen. A frame in the video shows a man darting through the same doorway the man could be seen coming from in the first video.

The flames can be seen rising from the same place as in the first video, and both doors in the hallway were reportedly charred in the two incidents.

Again, a further 20 units and 80 firefighters responded to this fire to get it under control

The Fire Department said that one resident suffered non-life threatening injuries in the second fire.

Kotlyarov is charged with multiple counts of arson, burglary, reckless endangerment, and criminal mischief. The case will be prosecuted by the Brooklyn District Attorney’s office.

Cannibals use corpses as altars and drink from human skulls