The former CEO and PR chief of eBay vowed to ‘crush’ a woman whose newsletter was critical of their site, according to new information in a bizarre cyberstalking case.

Prosecutors in Massachusetts on Monday unveiled an indictment against six former e-Bay employees who are accused of harassing a couple in the state who ran a newsletter about e-commerce.

On Wednesday Bloomberg reported that two of those involved were Devin Wenig, eBay’s CEO from 2011 to 19, and Steven Wymer, eBay’s public-relations chief for about nine months in 2019.

The former CEO of e-Bay, Devin Wenig, is reported to have participated in a harassment plot 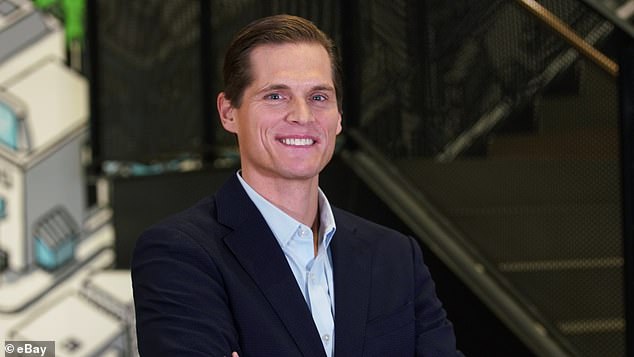 Wymer allegedly sent a text to Wenig in April 2019 saying: ‘We are going to crush this lady.’

The text was sent after the newsletter published a story about Wenig’s compensation, according to the indictment.

Those texts preceded an alleged cyberstalking campaign that included sending the couple live cockroaches, a funeral wreath, a bloody pig Halloween mask and a book on surviving the death of a spouse.

Wenig and Wymer have not been charged, and in the indictment are referred to as ‘Executive 1’ and ‘Executive 2’.

In a statement emailed to The New York Times, Wenig said: ‘As confirmed by the company following a thorough, independent investigation, I did not direct or know anything about the acts that have been charged in Boston.

‘I have spent my career defending press freedoms.

‘What these charges allege is unconscionable.’

Andrew Lelling, US attorney for Massachusetts, said that the unnamed couple, who lived in the town of Natick, were targeted for displeasing the executives.

‘This was a determined, systematic effort by senior employees of a major company to destroy the lives of a couple in Natick all because they published content that company executives didn’t like,’ he said. 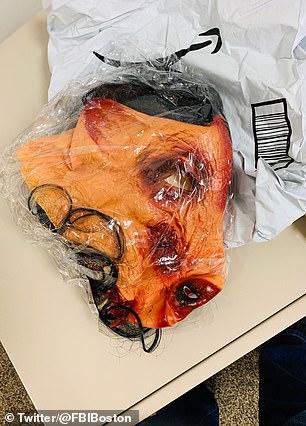 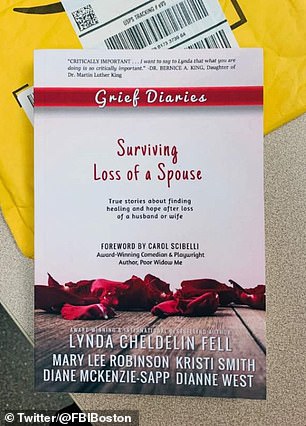 The FBI in Boston released images showing some of the disturbing items that were allegedly sent by eBay staffers to the editor of an e-commerce newsletter as part of a twisted campaign of harassment, including a bloody pig mask and a book on grief 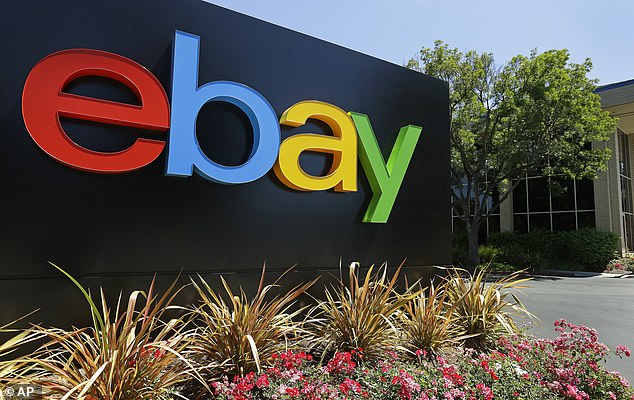 In September 2019, eBay fired six workers, among them high-ranking executives, after learning of the alleged plan to terrorize the blogger

‘For a while they succeeded, psychologically devastating these victims for weeks as they desperately tried to figure out what was going on and stop it.’

Court documents detail how two members of the company’s executive leadership team orchestrated a three-part plot to go after the middle-aged couple after their newsletter published an article about litigation involving eBay. 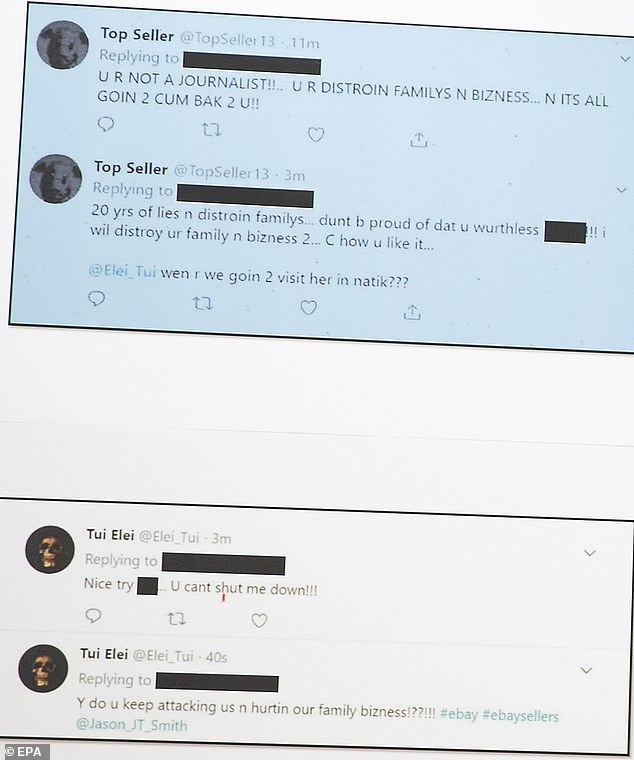 Joseph Bonavolonta, the FBI special agent leading the case, said the group was inspired by the movie Johnny Be Good, a 1988 sports comedy in which friends arranged a series of ‘unwanted and distracting items and people’ delivered to their football coach’s home, including an elephant and a male stripper.

In addition to the disturbing deliveries of fly larvae, spiders, roaches and a self-help book about coping with the loss of a spouse, the employees set up fake social media accounts to send threatening messages to the couple, authorities said.

After the bloody pig mask was delivered, the editor received a message saying: ‘DO I HAVE UR ATTENTION NOW????,’ according to court documents.

In one instance, the masterminds of the bizarre vendetta ordered a preserved pig fetus to be delivered to their victims, but it was never sent to the Natick couple because the seller began making inquiries.

According to federal prosecutors, the defendants had pornography addressed to the victims sent to their next-door neighbors’ house, and took out an ad on Craigslist inviting ‘singles, couples and swingers’ to come over to the newsletter publisher’s home to party each night.

As part of the second phase of the campaign, some of the defendants allegedly sent private Twitter messages and public tweets criticizing the newsletter’s content and threatening to visit the victims in Natick.

Court documents allege that Baugh, Gilbert, Popp and another eBay security employee planned these messages to become increasingly disturbing, culminating with ‘doxxing’ the victims by publishing their home address online. 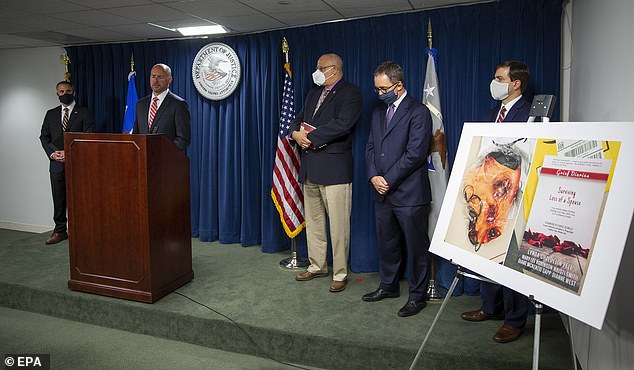 It is alleged that the eBay staffers intended then to have Gilbert, a former Santa Clara police captain, approach the victims with an offer to help stop the harassment in an effort to promote good will towards eBay and generate more favorable coverage in the newsletter.

The third phase of the twisted plot allegedly involved secretly surveilling the victims in their home.

According to the complaint, in August 2019, Baugh, Harville, Zea and later Popp drove to the victims’ home in Natick several times. The plan was to break into the couple’s garage and install a GPS device on their car.

‘As protection in the event they were stopped by local police, Baugh and Harville allegedly carried false documents purporting to show that they were investigating the victims as ‘Persons of Interest’ who had threatened eBay executives,’ according to the press release.

But the defendants’ stratagem ultimately unraveled after the victims spotted the surveillance and notified the Natick police, who began to investigate.

The police learned that Zea had rented one of the cars used by the defendants and reached out to eBay for assistance. 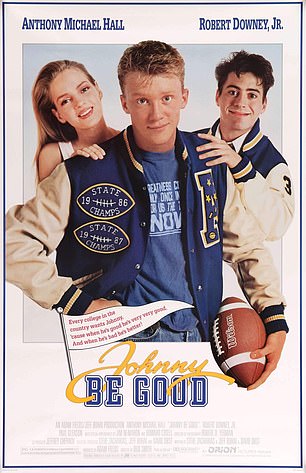 The FBI said the three-part plot was inspired by the 1988 comedy Johnny Be Good, where teens arrange en elephant and a male stripper delivered to their coach’s house

At one point, Baugh, Gilbert, Popp, and Stockwell allegedly plotted to fabricate another eBay ‘Person of Interest’ document that could be offered to the police as a lead on some of the harassing deliveries.

As the police and eBay’s lawyers continued to look into the allegations, the defendants allegedly deleted digital evidence that showed their involvement, further obstructing what had by then become a federal investigation.

An internal investigation was launched after eBay was notified by law enforcement in August 2019 of ‘suspicious actions by its security personnel,’ company officials wrote in a prepared statement.

The employees were fired in September, the company said.

The company’s then-CEO Devin Wenig stepped down in September.

Wenig said at the time that he was stepping down over differences with the board of directors.

The company said on Monday that the internal investigation found that, while Wenig’s communications ‘were inappropriate, there was no evidence that he knew in advance about or authorized the actions that were later directed toward the blogger and her husband.

‘However, as the Company previously announced, there were a number of considerations leading to his departure from the Company.’

The committee formed by the company’s board of directors to oversee the investigation said eBay ‘took these allegations very seriously from the outset.’

‘Upon learning of them, eBay moved quickly to investigate thoroughly and take appropriate action,’ it said.

In its statement on Monday, eBay apologized to the victims of the harassment, adding that the company ‘holds its employees to high standards of conduct and ethics and will continue to take appropriate action to ensure these standards are followed.

The six former eBay workers charged in the case could each face up to 10 years if convicted of conspiracy to commit cyberstalking and tamper with witnesses.

My six steps to keep smiling in the face of a second wave: Max...

Coronavirus: Infected can see others after 10 symptom-free days