Italy has been set on alert after coronavirus related deaths started to rise once more on Friday, showing warning signs of a possible return.

Deaths from the covid-19 pandemic in the nation climbed by 47 on Friday, against 66 the day before, the Civil Protection Agency said, while the daily tally of new cases decreased to 251 from 333 on Thursday.

The total death toll since the outbreak came to light on February 21 now stands at 34,561 the agency said, the fourth highest in the world after those of the United States, Brazil and Britain.

The number of confirmed cases amounts to 238,011, the eighth highest global tally or virus deaths.

People registered as currently carrying the illness fell to 21,543 from 23,101 the day before.

With the country trying to get back to an element of normal life, Italy has now reported warning signs that coronavirus could make an increased return 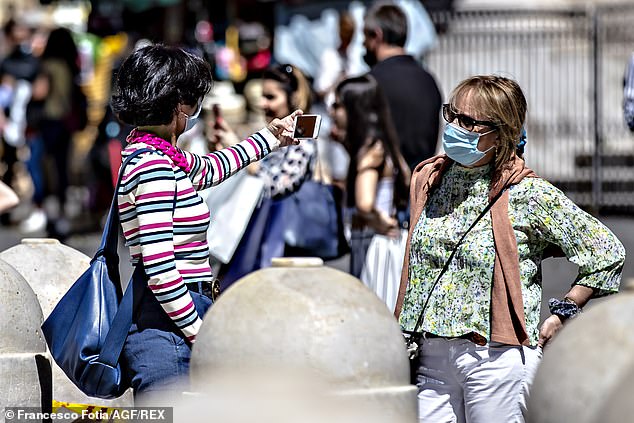 Tourists and roman citizens pictured milling around at the Pantheon on Thursday, wearing protective masks as the tourism industry tries to get back onto its feet

Figures of individuals in intensive care totalled 161 on Friday from 168 on Thursday. Of those originally infected, 181,907 were declared recovered against 180,544 a day earlier.

The Civil Protection Agency said 2.987 million people had been tested for the virus against 2.959 million on Thursday, out of a population of around 60 million

In its weekly report, the Higher Institute of Health (ISS) said the situation was generally positive, but that there was still a significant circulation of the virus.

‘In some regions, a high number of new cases of COVID-19 infection continues to be reported,’ the agency said in the report for the week of June 8-14.

Lazio, the region including the capital Rome, topped the number of cases, exceeding Lombardy, the original epicentre of the epidemic in the country.

Two outbreaks were identified in recent days in Rome, where health officials say the situation is ‘under control’. One was an illegally occupied building in a working-class neighbourhood and the other in a hospital.

‘This should encourage caution because it indicates that in certain parts of the country, the circulation of the virus is still significant,’ the report said. 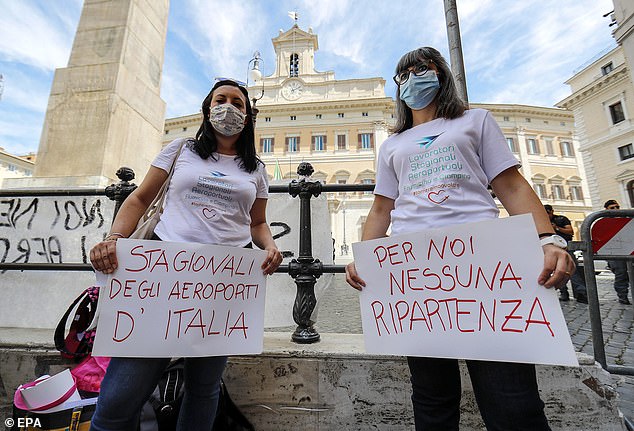 Citizens have been taking back to the streets of the capital, with protests occurring this week for seasonal airport workers at Montecitorio 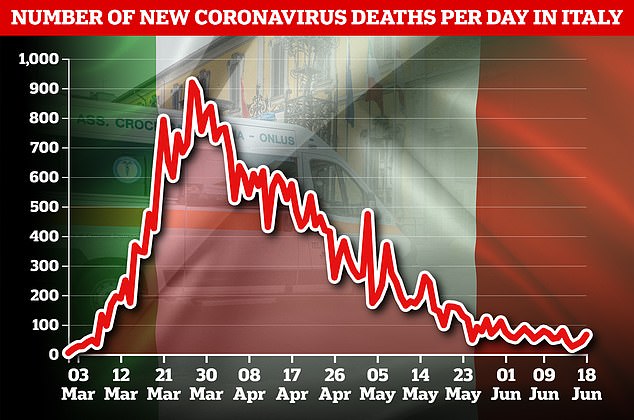 The epidemic has killed more than 34,500 people in Italy, since the first case was recorded in Codogno in Lombardy, the first infection identified outside China where the disease appeared in December 2019.

The latest news comes after Italian researchers discovered genetic traces of SARS-CoV-2 – as the virus is officially known – in samples of waste water collected in Milan and Turin at the end of last year, and Bologna in January, the ISS institute said.

Italy’s first confirmed cases were not until February.

The results ‘help to understand the start of the circulation of the virus in Italy,’ the ISS said.

Italy was the first European country to be hit by the virus and the first in the world to impose a nationwide lockdown, in early March. 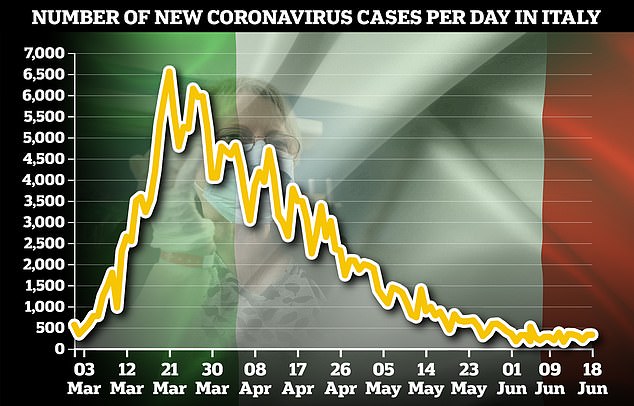 Many European countries followed suit, and most have only begin reopening this month after painful shutdowns that devastated their economies.

Facing the biggest recession in the EU’s history, leaders on Friday held a virtual summit on the European Commission’s proposal for a 750 billion euro ($840 billion) rescue fund.

However they fell short of reaching a deal on a plan that has been seen as a key gesture of solidarity and unity for the troubled bloc.

Opposition is fierce from the ‘frugal four’ – Netherlands, Sweden, Denmark and Austria – who have promised to fight to rein in spending.

On the other side are countries such as Italy and Spain that were the first and hardest hit by the pandemic, having already been crippled by overstretched finances.

Coronavirus is found in sewage water that was circulating in Italy in DECEMBER, six weeks before the country’s first confirmed case

Scientists in Italy have found traces of coronavirus in wastewater collected from Milan and Turin in December 2019.

It suggests COVID-19 was already circulating in Northern Italy before China reported the first cases on December 31.

The Italian National Institute of Health looked at 40 sewage samples collected from wastewater treatment plants in northern Italy between October 2019 and February 2020.

An analysis released late on Thursday said samples taken in Milan and Turin on December 18 showed the presence of the SARS-Cov-2 virus.

The first confirmed case of coronavirus in Italy came on January 31.

‘This research may help us understand the beginning of virus circulation in Italy,’ Giuseppina La Rosa, an expert in environmental wastewater at the Italian National Institute of Health who co-led the research, said in a statement detailing the findings. 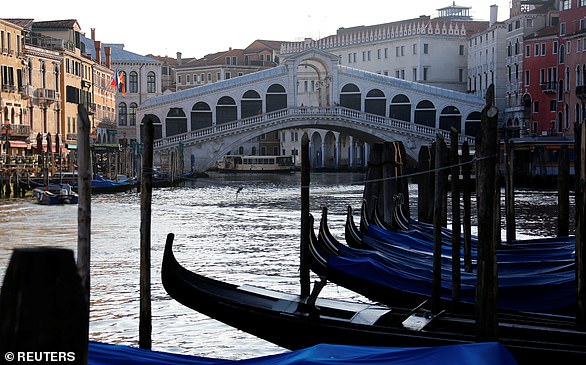 Small studies conducted by scientific teams in the Netherlands, France, Australia and elsewhere have found signs that the virus that causes COVID-19 can be detected in sewage, and many countries are beginning to use wastewater sampling to track the spread of the disease.

La Rosa said the detection of traces of the virus before the end of 2019 was consistent with evidence emerging in other countries that COVID-19 may have been circulating before China reported the first cases of a new disease on December 31.

A study in May by French scientists found that a man was infected with COVID-19 as early as December 27, nearly a month before France confirmed its first cases.

La Rosa said the presence of the virus in the Italian waste samples did not ‘automatically imply that the main transmission chains that led to the development of the epidemic in our country originated from these very first cases’.

Samples positive for traces of the virus that causes COVID-19 were also found in sewage from Bologna, Milan and Turin in January and February 2020.

The institute said it plans to launch a pilot study in July to monitor wastewater at sites identified in tourist resorts.

It comes after previous research by University College London’s Genetics Institute suggested coronavirus may have emerged as early as October last year.

A genetic study of samples from more than 7,500 people infected with COVID-19 indicated that the new coronavirus spread quickly around the world after it emerged in China sometime between October and December last year.

Researchers at University College London’s Genetics Institute found almost 200 recurrent genetic mutations of the new coronavirus – SARS-CoV-2 – which the UCL researchers said showed how it is adapting to its human hosts as it spreads.

‘Phylogenetic estimates support that the COVID-2 pandemic started sometime around October 6, 2019 to December 11, 2019, which corresponds to the time of the host jump into humans,’ the research team, co-led by Francois Balloux, wrote in a study published in the journal Infection, Genetics and Evolution.

Balloux said the analysis also found that the virus was and is mutating, as normally happens with viruses, and that a large proportion of the global genetic diversity of the virus causing COVID-19 was found in all of the hardest-hit countries.

Britain’s most attractive pubs according to CAMRA

‘I’m no Cruella de Vil’: Ghislaine Maxwell insists she is not an ‘evil villain’

Madison Beer showcases her legs in a mini dress and oversized...

Coca-Cola’s work with scientists was a ‘low point in history of...