Ministers must seize the ‘opportunity’ of the coronavirus crisis to invest in cleaner technology and creating future jobs, says former Bank of England governor Mark Carney

Ministers must seize the ‘opportunity’ of the coronavirus crisis to invest in cleaner technology and creating future jobs, Mark Carney said today.

The former Bank of England governor said public and private investment would be crucial for the recovery as consumers will be less ‘aggressive’ about spending.

He said change had ‘accelerated’ over recent months and many businesses that had good strategies before the pandemic hit will need to overhaul them dramatically.

But Mr Carney – who is now the PM’s envoy for the COP26 climate summit – struck an optimistic note, insisting capital was already being ‘repurposed’ to take advantage of the upheaval by putting the economy on a ‘more sustainable and efficient footing’.

In an interview with BBC Radio 4’s Today programme, he argued that the UK was well positioned to benefit from the shifts, as the City was already a ‘leader’ in such investment.

The intervention came as part of a series by the corporation considering how society can improve after the coronavirus turmoil.

Mr Carney cited Lenin’s view that ‘there are decades when nothing happens, and there are weeks when decades happen’.

There has been an acceleration of change in recent months,’ he said.

Mr Carney denied that work had slowed on climate issued while the world focused on combating disease.

‘What is really happening on the investing side is there is a recognition of an opportunity not a risk of moving the economy to a more sunstainable and efficient footing.

‘A lot of capital is being repurposed for that… this is an area where the City is a leader and can extend its lead.’

‘There is going to be a need for public and private investment.’

Government borrowing is expected to hit £300billion this year as the economy reels from the impact of the pandemic.

Chancellor Rishi Sunak is preparing a huge recovery package for when the immediate challenge of coronavirus subsides, which could involve slashing VAT to stimulate growth.

Boris Johnson has also insisted he will still pump money into ‘levelling up’ the country by boosting infrastructure and retraining. 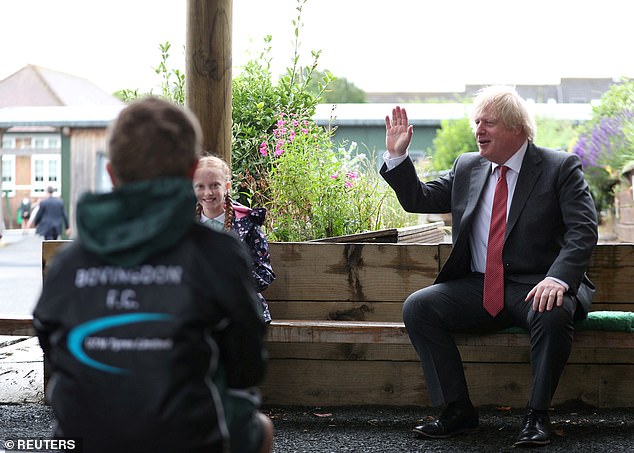 Boris Johnson (pictured on a visit to a school last week) has insisted he will still pump money into ‘levelling up’ the country by boosting infrastructure and retraining, despite huge government borrowing

Ruff and tumble! Labrador refuses to cut puppy any slack in tug-of-war over a sock

The 1975’s 22-track album ranges from the sublime to the ridiculous, writes ADRIAN THRILLS

Doctor loses court fight with ex as judge ruled she FORGOT agreement to give...

Sylvia Jeffreys practices baking a one cake despite Oscar being only six months but...

What it costs to rent a home near you: Average UK...

Mark Wahlberg ‘is using taxpayer’s cash to pay staff at his...

BAZ BAMIGBOYE: Summerland is a spoonful of hope, love, light and...