He sparked the ‘Cheriegate’ scandal, when he helped Cherie Blair to buy two flats in Bristol at a discounted price, and swindled Sarah, Duchess of York, but conman Peter Foster is back and insists he’s a changed man.

I can disclose that the career criminal is penning his memoirs, and claims producers want to turn them into a TV drama.

It is thought he will finally reveal the truth about the extent of his relationship and business dealings with Cherie. Downing Street initially denied Mrs Blair’s association with the convicted fraudster, but she was then forced to deliver a tearful apology on TV over her dealings with him saying: ‘I’m not Superwoman.’

Peter Foster sparked the ‘Cheriegate’ scandal, when he helped Cherie Blair to buy two flats in Bristol at a discounted price

‘I’m writing my book,’ Foster confirms. ‘There has been interest to have it turned into a mini-series or film . . . but it has to be with my creative input.

‘I am not going to sugar-coat my past; I just ask it is treated in a fair and balanced way. I know my reputation is putrid, I am a social leper, but I am trying to live a more dignified, decent life.’ Foster became Mrs Blair’s financial adviser after meeting the prime minister’s wife through his then girlfriend Carole Caplin, who was ‘health guru’ to Cherie and spent time at 10 Downing Street.

Over the years, his victims have ranged from boxing legend Muhammad Ali to the glamour model Samantha Fox, who was his girlfriend at the time. 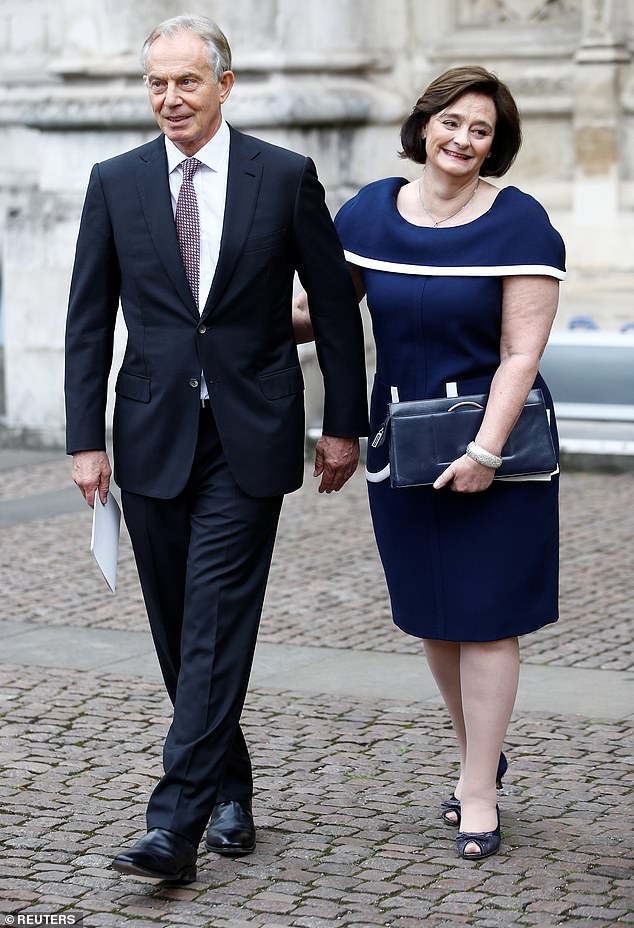 He used her to promote a weight-loss tea before going on to con the Duchess of York. He convinced Fergie that Bai Lin was an ‘ancient Chinese diet secret’ when it turned out to be ordinary black tea.

It led to his conviction in Britain, and he also served jail sentences in the U.S., Vanuatu and Australia, mostly for fraud.

Countryfile presenter and keen hiker Helen Skelton offers a novel tip for keeping in good shape — carrying her boys, aged five and three, as makeshift training weights. ‘We go for a walk and they’ll decide they don’t want to go any further so I’ll have one on my front and one on my back.’

James Bond writer Ian Fleming created one of the suavest fictional spies in the world, but when it comes to having fun in lockdown, his great-nieces are turning to more juvenile characters for inspiration.

Socialite Hum, 30, and her twin sister, party planner Chloe, have been dressing up in pyjamas and squeezing into plant pots to re-enact Bill and Ben — characters from children’s series The Flower Pot Men.

Dedicating the picture online to her sister, Hum describes them as ‘top of the pots’, adding: ‘Whether arguing over dog leads, singing Les Mis in the car, or sitting in flower pots, I couldn’t have laughed as much without you.’ 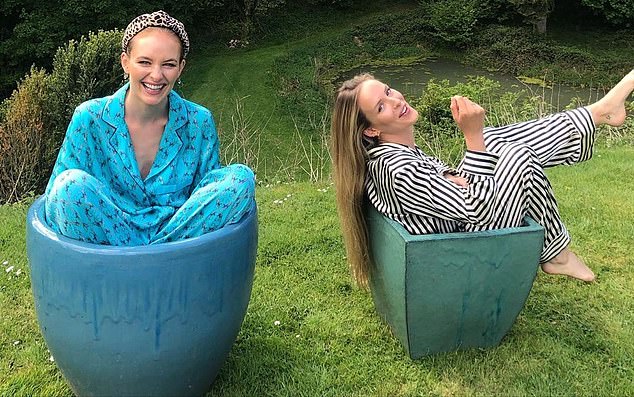 Socialite Hum, 30, and her twin sister, party planner Chloe, have been dressing up in pyjamas and squeezing into plant pots to re-enact Bill and Ben — characters from children’s series The Flower Pot Men

Stage and screen star Dame Harriet Walter has put lockdown to good use. ‘I’ve gone back to learning Russian. I tried years ago, but I never had time to do it regularly — and unless you do it regularly, you don’t get better. I’ve done a lot of Chekhov and I’ve just played a Russian in Killing Eve — so it seemed like a good time. I speak three languages pretty well — French, Spanish and Italian — but Russian has a completely different structure, so it’s a bit of a brainteaser for me.’

Former GMTV host Penny Smith is railing at the lack of serious female presenters making TV documentaries about trains. ‘Michael Portillo has got the trains, Chris Tarrant has got the trains,’ she says. ‘I’d love to do those. When they’ve got women it’s now comedians. You get people who are comedic who go and do these things. I can’t bear to watch them because I spend the entire time going, “Could have been me”.’ Has Smith thought about launching the Me-Choo movement? 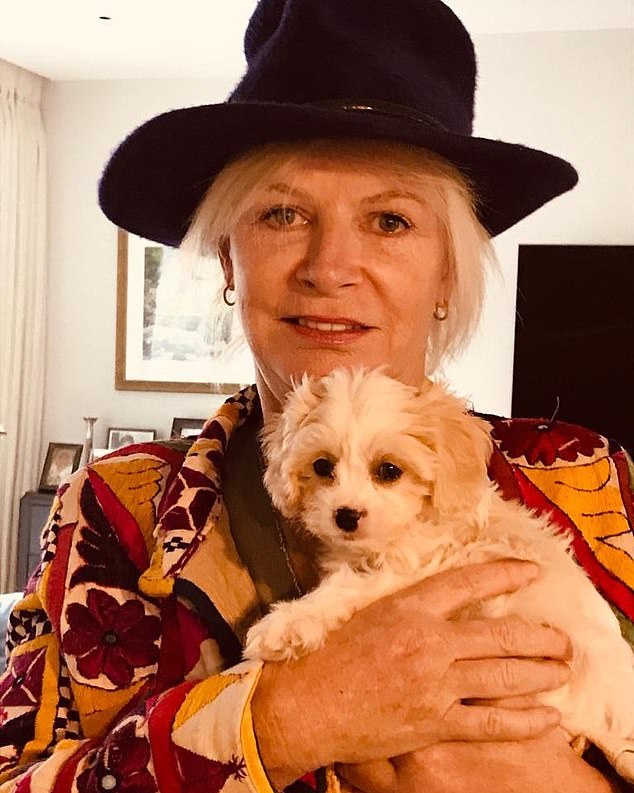 After raising party-loving models Cara and Poppy Delevingne, as well as their sister, Chloe, Pandora has welcomed a new member into the family – a cream cavapoo pup

Will Pandora’s pup be a party animal?

After raising party-loving models Cara and Poppy Delevingne, as well as their sister, Chloe, former personal shopper Pandora would be forgiven for wanting to enjoy a quieter home life now that they have all flown the nest.

However, the 60-year-old, whose mother, Janie Sheffield, was lady-in-waiting to Princess Margaret, has instead welcomed a new member into the family — a cream cavapoo pup.

The wife of property developer Charles shared a picture of herself with the dog, whom she describes as ‘my new baby’, and reveals they have named her Doris — the same name as Charles’s late aunt, socialite Doris Castlerosse, whose reputed lovers included snapper Cecil Beaton and Sir Winston Churchill. 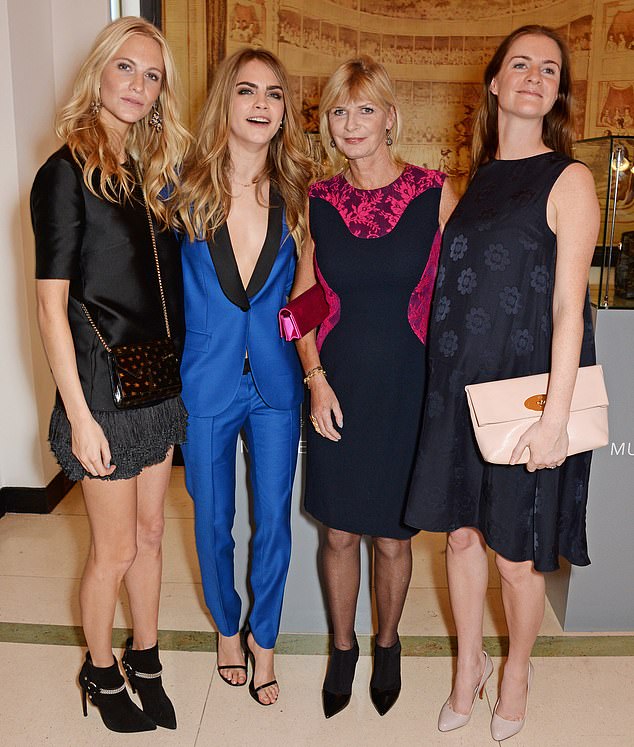 The 47-year-old marked Father’s Day this week by posting a picture online — taken before lockdown — of Chris, 43, holding hands with their daughter Apple, 16, on a boat. ‘Happy Father’s Day to all of the dads out there. Sending you all love,’ she captioned it.

She included another picture of their son Moses, 14, sitting with Chris as well as Gwyneth’s new husband, film producer Brad Falchuk. 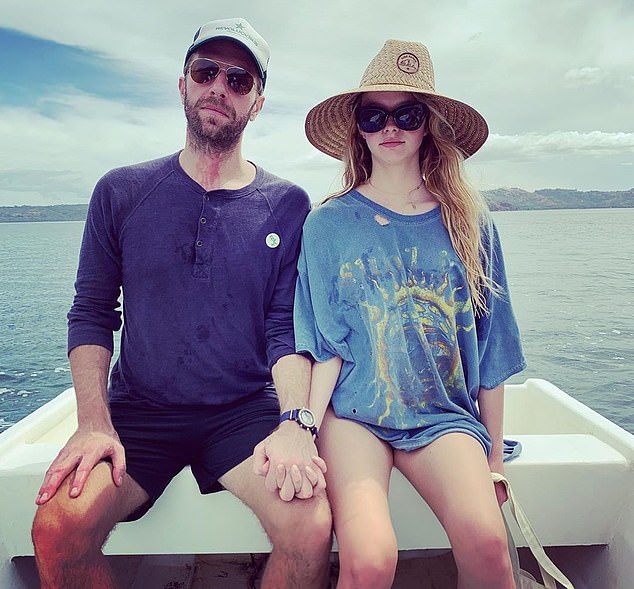 Man and woman are arrested after 12-year-old boy dies

TV presenter, 28, viciously beaten by a stranger who tried to rape her in...

More than 1,000 people form a half-mile long queue for free food in Geneva

People are outraged to discover how Costa’s £4 Mango and Passion...