Nicola Sturgeon insisted the two-metre rule will not be dropped in Scotland despite Boris Johnson dramatically easing the restrictions in England.

The First Minister rejected calls to follow the PM’s move, which has been hailed by business groups and even welcomed by Labour.

She said the rule was being reviewed, but her scientists still believed it needed to remain in place and the position in Scotland ‘remains the same’.

Evidence of splits within the UK are mounting, with Mr Johnson hitting out this afternoon at the ‘unnecessary’ five-mile limit on travelling away from home in Wales.

The premier also accused Labour first minister Mark Drakeford of ‘blessed amnesia’ for claiming that the Westminster government had not been keeping in touch over the coronavirus crisis.

As Mr Johnson was speaking in Westminster, Nicola Sturgeon told her daily briefing in Edinburgh that she would be announcing dates for the next phases of the Scottish Government’s route map out of lockdown tomorrow. 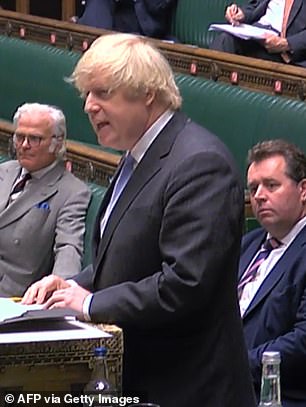 What can re-open on July and what will have to remain closed?

Boris Johnson unveiled a widely expected relaxation of the lockdown in England today.

Bars, pubs, restaurants, bingo halls and hairdressers ware among venues that will be allowed to reopen from July 4 as long as they are ‘Covid secure’, meaning they have social distancing measures in place, which means keeping people apart plus extra measures like screens and masks.

But others will be forced to remain closed as they are still seen as too high rick to be allowed to open their doors.

They include indoor gyms, nail bars, tattoo parlours and nightclubs.

Here is a list of what can and cannot open from July 4 under new the lockdown plan.

She said: ‘Tomorrow, I’ll be able to provide further detail on the timing of some of the specific steps in that journey.

‘I’ll be able to do so tomorrow ahead of when I thought just a few days ago that might be possible.’

But on social distancing, the First Minister said her scientific group would report to her on the two metre rule by July 2 – but stressed the advice was still in support of the limit.

She said: ‘Until then, the position here in Scotland remains the same. We are asking people to keep two metres physical distancing.

‘Any changes from other parts of the UK, while we will look at the evidence underpinning those very carefully, will not apply here at this stage.’

In the Commons, Mr Johnson insisted the differences in approach between the home nations were not great.

He said he expected Ms Sturgeon to bring forward easings similar to the English ones soon.

But he criticised the five-mile limit on travel from home imposed by the Labour administration in Wales.

‘I have my doubts about the five mile rule in Wales and wondered whether that might be reviewed,’ he said.

He added later: ‘I am not sure the five mile limit rule is entirely necessary and perhaps that needs to be withdrawn.’

Mr Johnson swiped that Mr Drakefored appeared to be suffering from ‘blessed amnesia’, after complaining that he had not had contact from Westminster.

He said the UK government was in ‘daily contact’ with the devolved administrations.

He insisted ‘caution’ would remain the ‘watchword’. But he said it was now possible to ‘safely’ ease the lockdown.

‘We continue to meet our five tests and the chief medical officers of all four home nations have downgraded the coronavirus alert level from four to three, meaning we no olonger face a virus spreaduing exponentially although it remains in general circulation.’

But he added: ‘Where it is not we will advise people to keep a safe distance of one metre plus, meaning they should remain one metre apart, while taking mitigations to reduce the risk of transmission.

‘We are today publishing guidance on how businesses can reduce the risk by taking certain steps to protect workers and customers.

‘And of course, we already mandate face coverings on public transport.

‘Whilst the experts cannot give a precise assessment of how much the risk is reduced, they judge these mitigations would make ‘1 metre plus’ broadly equivalent to the risk at two metres if those mitigations are fully implemented.

‘Either will be acceptable and our guidance will change accordingly.’

Mr Johnson said he was aware that the public will ask questions about seeming inconsistencies .

‘We cannot lift all the restrictions at once so we have to make difficult judgements.’

Mr Johnson said two household will be able to meet up in any indoor setting, with no limit on total numbers.

Pointing out that the arrangements between groups did not have to be exclusive, he added: ‘That does not mean they must always be the same two households.

‘It will be possible for instance to meet one set of grandparents one weekend, and the others the following weekend.

‘We are not recommending meetings of multiple households indoors because of the risk of creating greater chains of transmission.

‘Outside, the guidance remains that people from several households can meet in groups of up to six.’ 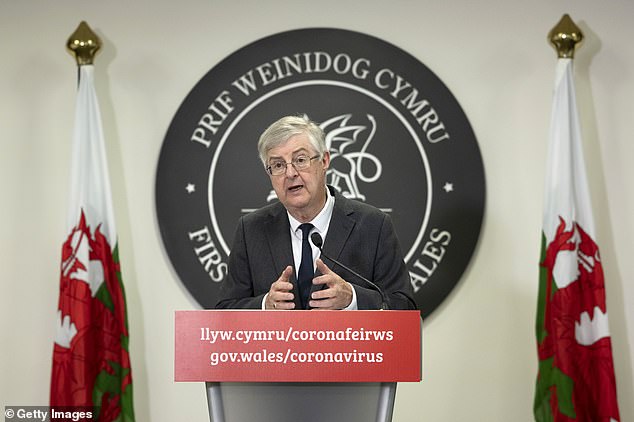 But Mr Johnson said: ‘We are not recommending meetings of multiple households indoors.’

Outdoors, the maximum of six people meeting from different households remains. But there is no limit on a meeting between two households.

Mr Johnson said: ‘Almost as eagerly awaited as a pint will be a haircut,’ he said.

The PM insisted nail bars would be open ‘as soon as we can’.

But noting that the PM had given him advance notice of what was coming, he said: ‘We welcome the thrust of this statement.’

NBA reveals 16 players tested positive for coronavirus after 302 were...

WHO warns that millions more could die in a coronavirus second...

Camel sends family into panic when it sticks its head inside...