Madison Beer claims she has been receiving death threats as she fires back at trolls over plastic surgery accusations: ‘Focus on your own lives’

Madison Beer says she has gotten death threats as she slammed trolls accusing her of getting plastic surgery.

Twitter users insisted Madison had gone under the knife after the singer was spotted leaving a plastic surgeon’s office, where fans claim she was photographed ‘hiding’ once she realized she had been spotted.

Madison, 24, said she didn’t get any work done, but rather was getting a consultation for a mole removal.

Speaking up: Madison Beer has slammed trolls who have accused her of getting plastic surgery

The singer was compelled to respond to the allegations after former adult film star Mia Khalifa called out the images on Tik Tok.

Khalifa announced she had gotten a nose job herself, and made reference to the photos as she wrote, ‘I’d never hide behind a tree. Don’t compare urself to anyone on the internet, ur beautiful.’

A Twitter user responded, ‘MIA KHALIFA SHADING MADISON BEER IS SOMETHING I NEVER THOUGHT I WOULD SEE.’

Khalifa said she had no problem calling out anyone setting unrealistic beauty standards. 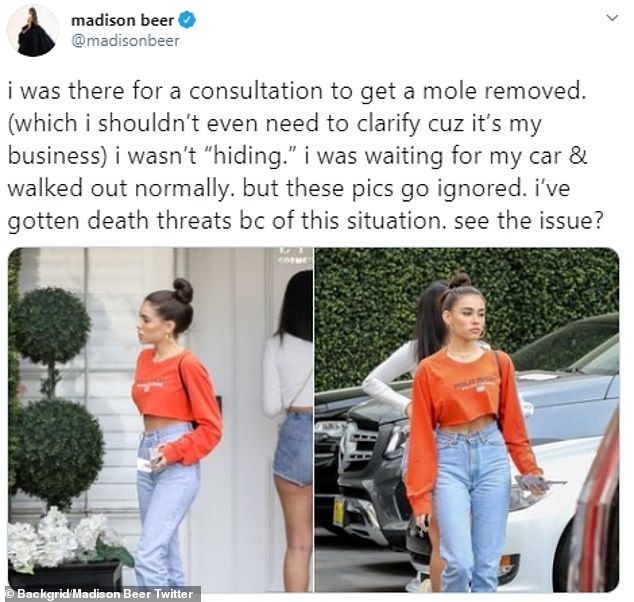 Hitting back: The singer was compelled to respond to the allegations after former adult film star Mia Khalifa called out the images on Tik Tok 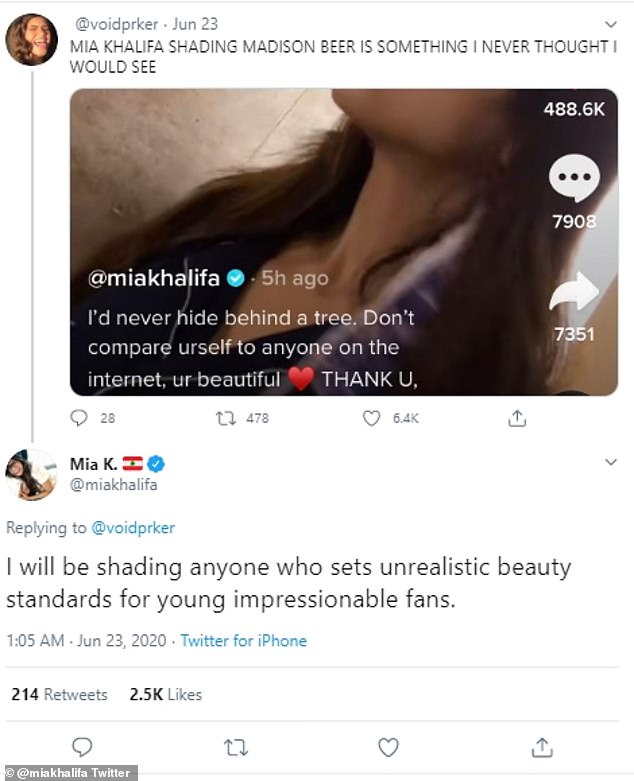 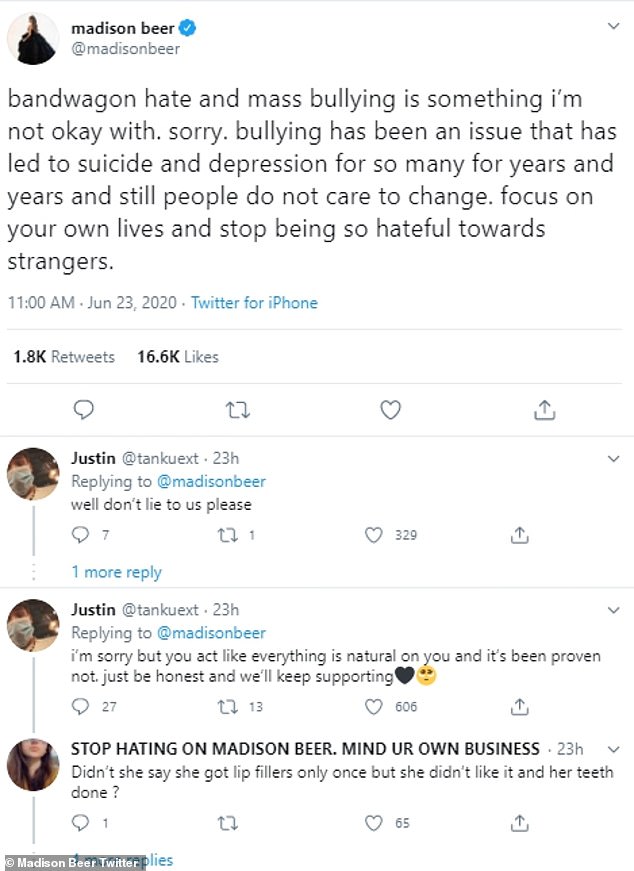 ‘I will be shading anyone who sets unrealistic beauty standards for young impressionable fans,’ she tweeted.

In her response, Madison claimed she had been receiving death threats over the issue.

‘bandwagon hate and mass bullying is something i’m not okay with,’ Madison tweeted in response to the allegations.

‘sorry. bullying has been an issue that has led to suicide and depression for so many for years and years and still people do not care to change. focus on your own lives and stop being so hateful towards strangers.’ 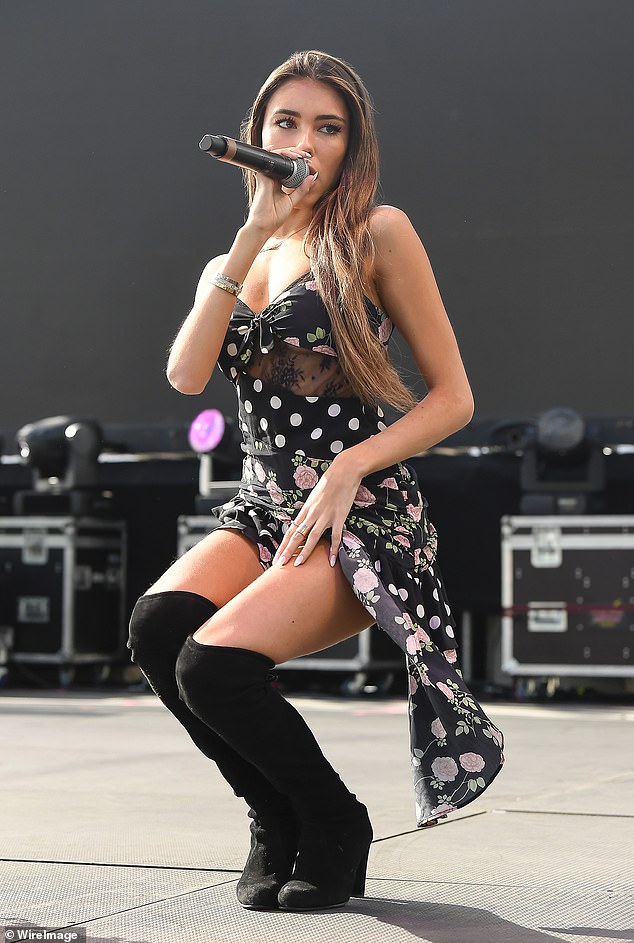 ‘Focus on your own lives’: Madison eventually responded, where she urged her bullies to focus on themselves 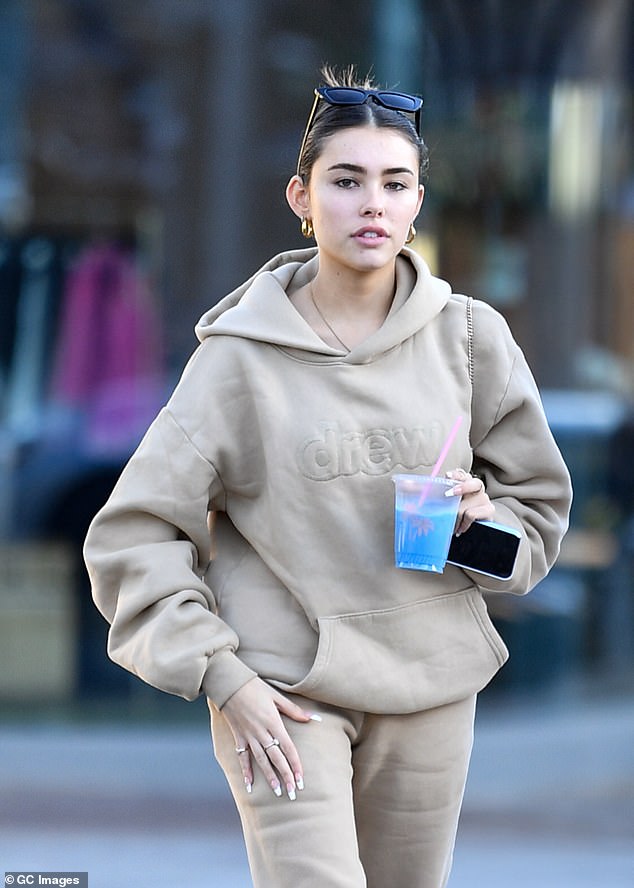 Doing her own thing: Beer was spotted enjoying a cool drink back in February

After a Twitter user brought up the plastic surgery office photos, Madison insisted she was just getting a mole checked out.

‘i was there for a consultation to get a mole removed. (which i shouldn’t even need to clarify cuz it’s my business) i wasn’t “hiding.” i was waiting for my car & walked out normally. but these pics go ignored. i’ve gotten death threats bc of this situation. see the issue?’

Madison resolved the issue by deciding to focus on herself and her passion for music.

‘anyyyywaayyys. i’m gonna continue to focus on my music, my fans and the people who know and support me. that’s it. i jus hope one day we can end bullying together because it’s f**ked up. thx! bye,’ she tweeted.

Madison was just 13 years old when she was discovered by Justin Bieber after the pop singer found a video of her singing the Etta James song At Last on YouTube.

Now a star herself, Madison boasts nearly 20 million followers on Instagram and will be releasing her debut studio album, Life Support, this summer. 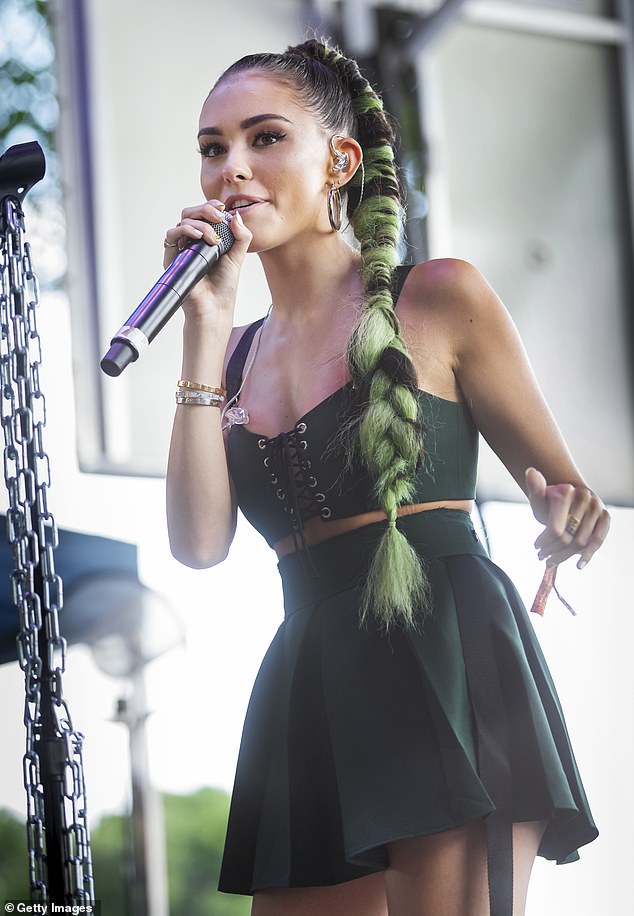 Claim to fame: Madison was just 13 years old when she was discovered by Justin Bieber after the pop singer found a video of her singing Etta James’ At Last on YouTube

Five more minutes! Pet owners share snaps of their cheeky dogs and cats taking a snooze in their bed

Boris Johnson slams ‘nuts anti-vaxxers’ as he urges ‘everybody’ to get a flu jab...

Megan Thee Stallion says she felt ‘very betrayed’ by all of her friends after...