By Shive Prema and Charlie Coe For Daily Mail Australia

Qantas chief executive Alan Joyce said on Thursday that the travel bubble is unlikely to be accessible until 2021.

Previously, the travel bubble between Australia and New Zealand was scheduled for early July but it appears it has been pushed back.

It comes after Qantas announced it will slash 6,000 jobs – 20 per cent of the airline’s workforce – as the government’s lockdown of international borders continues to cripple the aviation industry.

The airline also said the 15,000 staff members already stood down will remain out of work ‘for some time’.

The staff cuts come just days after Qantas cancelled all of its international flights other than those between Australia and New Zealand until September because of the ongoing COVID-19 pandemic.

Qantas employees working as ground and cabin crews and in the airline’s Sydney head office will form the bulk of the job cuts.

The airline’s fleet of 12 Airbus A380s used for long-haul flights will be grounded for three years and moved to storage in California’s Mojave desert.

Qantas CEO Alan Joyce told reporters on Thursday the impact of coronavirus meant the company would have to become a ‘smaller airline’ in the short term.

He added overseas travel was unlikely until mid-2021 – even within the proposed trans-Tasman travel bubble between Australia and New Zealand.

‘We have never experienced anything like this before – no-one has. All airlines are in the biggest crisis our industry has ever faced,’ he said.

‘Revenues have collapsed, entire fleets are grounded and the world biggest carriers are taking extreme action just to survive.

‘IATA –the peak body for airlines – says it will take more than three years for global travel to return to 2019 levels. 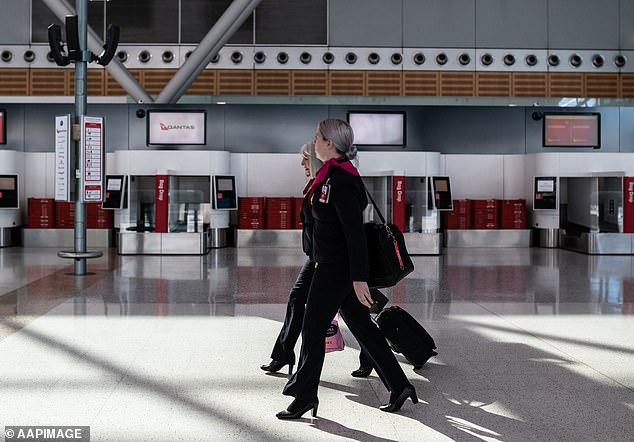 Air crew walk through the Qantas Terminal at Sydney Airport on June 19. 15,000 staff members already stood down will remain out of work ‘for some time’

‘We have to position ourselves for several years where revenues will be much lower. And that means becoming a smaller airline in the short term.’

Mr Joyce said he expected to bring back about half of the 15,000 staff stood down to the workforce by the end of the year as domestic travel within Australia returns to normal.

‘The remainder – mostly those supporting international flying – will return more slowly,’ he said. 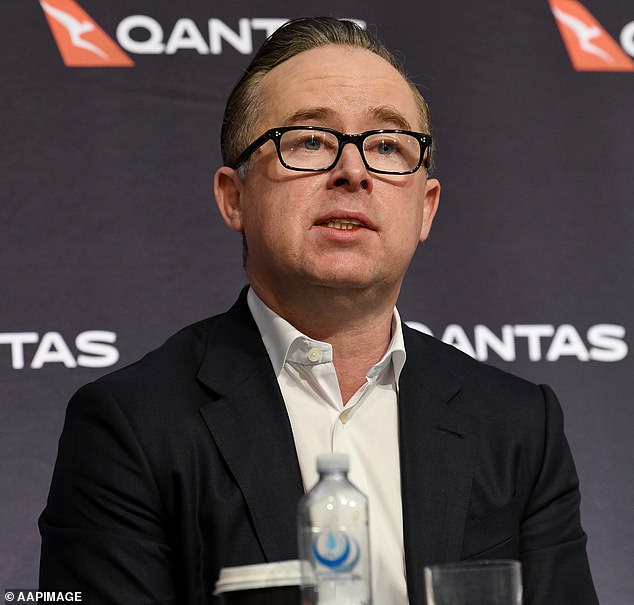 The airline is meanwhile attempting to raise $1.9billion to shore up its financial status – having already raised $1.55billion through bank loans taken out against its Boeing 787-9 fleet.

Trading in the airline’s shares were halted ahead of the announcement of its plan to raise capital.

Mr Joyce said though he would remain on as Qantas CEO as part of a three-year plan to revive its fortunes.

In response to the mass job cuts, The Transport Workers’ Union said Qantas should have held off until the federal government reviewed Jobkeeper – an announcement expected at the end of July.

THE CUTS BEING MADE BY QANTAS AND JETSTAR

‘Before Qantas slashed thousands of workers’ jobs and takes more of its planes down to the pawn shop it should be lobbying the Federal Government for an extension to Jobkeeper and financial support to allow the airline to weather the crisis,’ TWU National Secretary Michael Kaine said.

‘We are demanding that he halt these redundancies until the Federal Government makes an announcement on Jobkeeper.’

Last Wednesday, the airline cancelled all of its international flights until October apart from those to New Zealand in anticipation of the opening of a trans-Tasman bubble.

The cancellations came on the same day Trade Minister Simon Birmingham announced the country’s borders will remain closed for another four months.

Lovers confess how they really feel about their partner’s looks

Karl Stefanovic and 60 Minutes are slammed for ‘race baiting’ Meghan Markle and Prince...

Chemicals found in kitchenware can DOUBLE your risk of obese grandchildren, research shows