England goes al fresco: New law paves the way for streets to be turned into open markets and planning red tape slashed so pubs can use car parks as makeshift beer gardens

England is set to go al fresco to combat coronavirus as ministers unveil plans to turn streets into outdoor markets and allow pubs to use car parks as beer gardens today.

New laws being published today will loosen restrictions on drinking, dining and shopping outdoors – where the risk of transmission is regarded as much lower.

The Business and Planning Bill, which should be fastracked through Parliament in time for lockdown easing on July 4, will make it easier for local authorities to pedestrianise streets to help struggling businesses.

Controversial plans to reform Sunday trading laws have been dropped from the Bill to ensure it passes through Parliament quickly.

Drinkers relax on the Southbank in London this week, with ministers set to loosen restrictions on al fresco trade 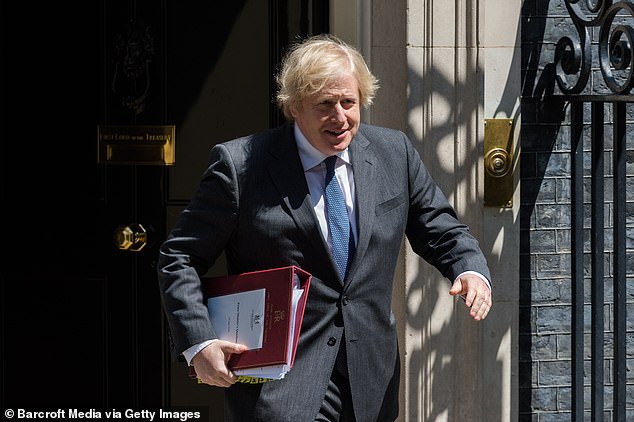 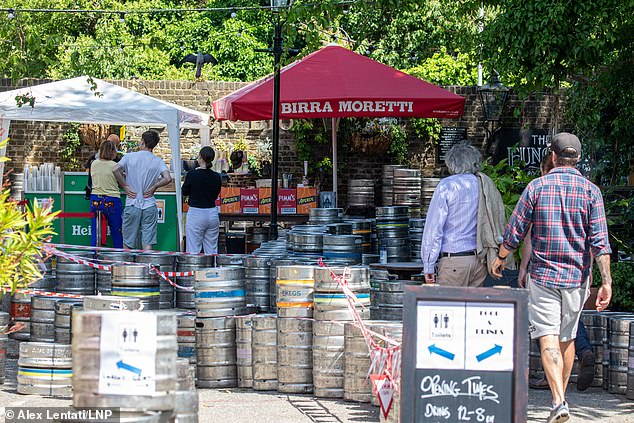 A government source said: ‘People talk about the cafe culture on the Continent and we want to recreate something like that here this summer – you could call it al fresco Britain.

‘It obviously depends on everyone adopting a can-do attitude to try and save the summer, but we are going to play our part by cutting red tape and getting out of the way of business.

‘You could see closed-off streets laid out with tables and chairs for dining. We are removing the need for planning permission for outdoor markets, so you could see small shops and boutiques which are struggling with social distancing setting up market stalls.’

The move is designed to counter criticism that guidance for indoor hospitality and retail is too onerous and off-putting to customers.

Former Tory leader Sir Iain Duncan Smith yesterday said ‘red tape and caveats’ in hundreds of pages of guidance published for businesses would make it impossible for many firms to operate profitably. 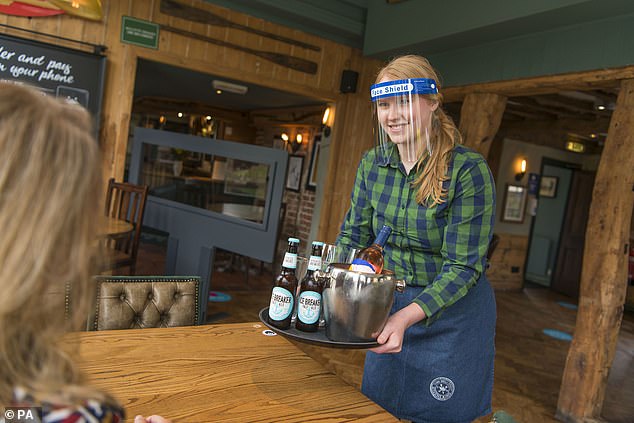 A waitress demonstrates PPE precautions at a Greene King pub in Fort St George in Cambridge, as England adjusts to the new normal

But ministers hope the new outdoor freedoms could help keep many firms afloat this summer.

The focus of the legislation, which will allow outdoor trading without the need for planning permission, is on creating a much more permissive business environment outdoors, where scientists believe the virus spreads much less easily.

Temporary changes to licensing laws will allow many more licensed premises, such as pubs and restaurants, to sell alcohol for consumption off the premises.

Pubs and restaurants will be able to convert outside space such as car parks and terraces into seated areas as well.

Downing Street yesterday confirmed that hospitality businesses have been exempted from laws that ban gatherings of more than 30 people. No10 said police would focus on breaking up ‘large, unruly’ gatherings, such as parties in parks and illegal raves.

From classic cubes to sexy spheres, this summer it’s not just what you drink, it’s how you chill it

Another 80 migrants are picked up in SEVEN boats

From classic cubes to sexy spheres, this summer it’s not just...

Chris, Liam and Luke Hemsworth keep it casual as they get...