Drug haul at Haberdashers: Ex-Ocado driver, 61, is jailed for almost three years after being caught with 10kg haul of amphetamines that was stashed at £21,000-a-year private school

By Amelia Wynne For Mailonline

An ex-Ocado driver has been jailed for almost three years after being caught with a 10kg haul of amphetamines that was stashed at a £21,000-a-year private school.

The drugs were driven from Haberdashers’ Aske’s Independent school in Hertfordshire to an address in Watford where they were put into a van.

Clive Latter, 61, from Addlestone in Surrey, was driving the van – that had two hidden compartments – when it was stopped on September 20 last year.

He was jailed for 34 months at St Albans Crown Court on Thursday. He appeared on a link from Bedford prison.

When the van was stopped in St Michael’s Drive, off Sheepcote Lane in Watford, Latter was asked if he was transporting cocaine. He replied: ‘No, speed – amphetamine.’

It is not known if he had a connection to the school or not.

At his home police found three quarters of a kilo of ketamine and £61,000 cash, St Albans crown court heard yesterday.

Latter had pleaded guilty to conspiracy to supply amphetamine, possession of ketamine with intent to supply, possession of a single wrap of cocaine and possessing three fake driving licences.

Prosecutor Simon Wilshire said undercover police were observing a man who had been ‘storing and preparing drugs’ on the premises of Haberdashers’ School in Elstree, Herts, where fees at the senior school cost £21,159 a year.

He said: ‘Mr Latter was a trusted courier, moving around large quantities of amphetamine.’

On the day of his arrest the police saw a man from Watford go to Haberdashers’ school to collect a bag. Latter went to an address in Watford and was stopped as he drove off. 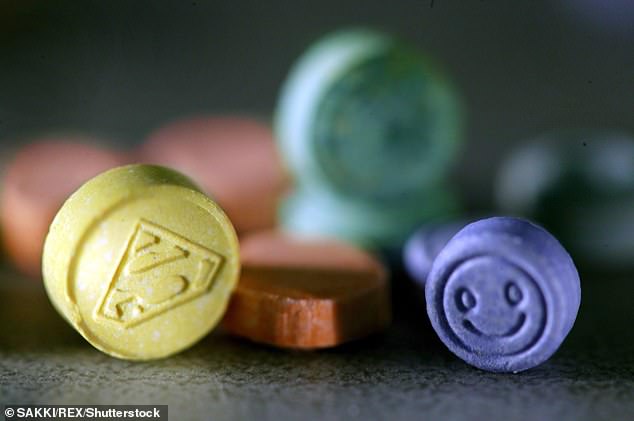 Mr Wilshire said: ‘The police found a hide that had been built behind the driver’s seat. Drug dogs were called and they soon established the presence of drugs.

‘Mr Latter was cooperative. When asked for he was transporting cocaine he replied: ‘No op – It is speed – amphetamine.”

‘He showed the PC another false compartment that could be opened by remote control. It was empty.’

The prosecutor said earlier, on September 5, undercover officers had seen Latter carrying out a virtually similar set of movements. On that occasion he was not stopped.

Defending, Karlia Lykourgou said Latter had lost his job with Ocado and couldn’t work for 18 months before the offence. She said he had never been involved in anything like a drug conspiracy before.

She said he suffered from diabetes and osteoarthritis. On remand in Bedford prison she said his condition has worsened.

Ms Lykourgou said Latter, who had been caring for his elderly parents, had no idea that the drugs were being stored on the school’s premises.

Jailing him, Judge Caroline Wigin said Latter had a significant role in the conspiracy and had been ‘the guardian of large amounts of cash.’

She said a proceeds of crime hearing will be at a later date.

Will a Covid mask starve your brain of oxygen?

Half of all active employees worked from home during lockdown

Man, 38, is arrested on suspicion of murder after woman ‘falls from fourth-storey window’

England has had at least 3.5MILLION cases of coronavirus, chief statistician says

Ally Sheedy EXCLUSIVE: The Breakfast Club star reveals she has only watched the iconic...

Will a Covid mask starve your brain of oxygen?

Experts warn of ‘tremendous deaths’ as COVID surges in 31 states...

How to Get Away With Murder series finale reveals the final...

Bill Gates says he urged Trump to get the nation ready...