By Adry Torres For Dailymail.com

A man who fled the US after shooting his teenage nephew dead and burning his body nearly three decades ago in Colorado is now being sought for the murder of his boyfriend in Mexico.

Police in Mexico City have launched a manhunt for Manuel Enrique Muela Luna after he allegedly killed his partner, a 31-year-old identified by authorities as ‘Omar’.

Mexican newspaper El Universal reported that Omar’s sister spoke to him Tuesday night to check on his well-being following a 7.5-magnitude earthquake that had struck the southern state of Oaxaca and impacted Mexico City.

Manuel Enrique Muela Luna is wanted in Mexico City for the killing of his boyfriend identified by authorities as ‘Omar.’ Muela Luna allegedly killed him in his apartment some time Tuesday before the body was found by cops Wednesday 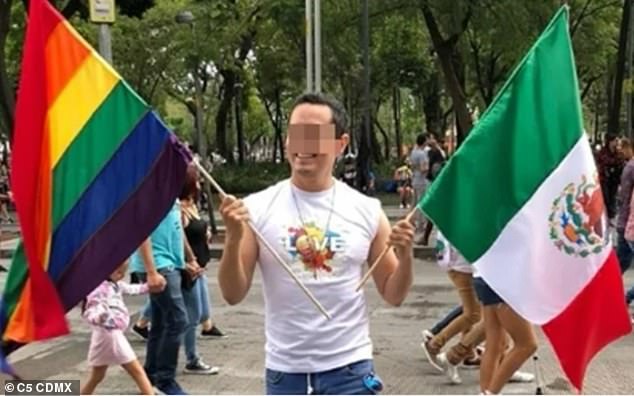 Omar was reportedly killed inside his Mexico City home by  his boyfriend, who after leaving the apartment apologized to a neighborhood for the noise that came from the apartment

The woman became concerned when calls to Omar went repeatedly unanswered at 1:30am.

She went to Omar’s home in the Zona Rosa neighborhood and called police when he failed to open the door and she noticed his vehicle was not parked outside the residence.

The police who broke into the apartment discovered Omar body, which had been tied up.

A woman who lives next door said Muela Luna had apologized to her for a commotion between the couple before he drove off in Omar’s SUV.

No arrests had been reported as of Friday morning.

Muela Luna had an extradition warrant from U.S. authorities for the murder of his 18-year-old nephew Luis Armendariz, who was shot in the head in 1992 in Colorado.

Prosecutors then said that Muela Luna had sexually abused his nephew and got upset when he found out that Armendariz was planning to marry his pregnant girlfriend. Armendariz was shot and was burned by his uncle.

Muela Luna fled to Mexico and was arrested in the northern state of Chihuahua.

The Mexican government, however, refused to hand over Muela Luna to U.S. authorities because he would have been eligible for the death penalty in Colorado if convicted.

Muela Luna, instead, faced charges in a Mexican court and was convicted for the murder.

He was sentenced to 27 years  in jail, but for unknown reasons was released after serving just six months.

Couple who kept 35 animals in their faeces-ridden home are forced to pay $18,000 in vet bills

Justin Theroux proves his dog Kuma is the ultimate canine in...

Couple who kept 35 animals in their faeces-ridden home are forced...

Zoe Ball dusts off her Sport Relief mountain bike as she...

Pictured: Grandfather, 60, killed when large chunk of concrete ‘fell from...