Six foreign criminals A DAY are freed onto streets of Britain instead of being deported, new figures reveal

By Ian Drury Home Affairs Editor For The Daily Mail

Six foreign criminals a day are being released from prison on to Britain’s streets instead of being deported, figures show.

A total of 2,152 offenders – including killers, sex attackers, robbers and drug dealers – were freed into the community last year after finishing jail sentences.

Six foreign criminals a day are being released from prison on to Britain’s streets instead of being deported, figures show. Home Secretary Priti Patel has promised ‘tougher action’ to speed up deportations

Under the rules, any foreign criminal sentenced to more than 12 months in prison is liable for automatic deportation.

However, guidelines say those who have finished their jail terms should be detained only if removing them is a realistic prospect.

It means that instead of being locked up until they are thrown out, they are released to be ‘managed in the community’.

But many abscond and slip off the radar, potentially putting the public in danger. 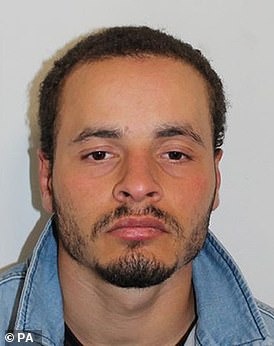 Officials missed six chances to kick illegal immigrant Hani Khalaf out of Britain before he murdered a carer.

The 22-year-old Egyptian bludgeoned Jairo Medina, 62, to death in London’s Hyde Park in August 2016 for his mobile phone and a few pounds.

Khalaf was free to live in the UK despite falsely claiming to be a Syrian refugee when he arrived in Kent two years earlier hidden in a lorry.

The career criminal had previously been arrested at least six times for theft and fraud, but was released rather than deported as he repeatedly lied about his identity.

In 2017, Khalaf was sentenced to a minimum of 26 years in jail for murder as a judge suggested that his case should prompt a review of the law.

Judge Wendy Joseph QC said the killer had ‘no respect for the law’. Khalaf was sent back into the community repeatedly and Mr Medina, a Colombian, paid for it ‘with his life’, she added.

Reading terror suspect Khairi Saadallah, from Libya, was released from prison 16 days before the attack that left three dead.

Some of those released use human rights or asylum laws to avoid being sent back home, or do not have travel documents and cannot be removed immediately.

Nearly a third – 2,430 – have been on the loose for more than five years. A further 3,055 have dodged being booted out for between 12 months and five years.

It comes after a series of scandals affecting the Home Office.

Last month the Daily Mail reported how the victim of the Rochdale child sex grooming gang came face-to-face with her abuser in a supermarket even though he should have been deported two years ago.

The girl was 13 when she became pregnant by paedophile Adil Khan, 50.

The taxi driver and two other men were due to be sent back to Pakistan after being released.

David Spencer, research director at the Centre for Crime Prevention think-tank, said: ‘This is a shambles. It is scandalous that there are thousands of foreign criminals living freely in our communities when they should long since have been deported to their own countries.

‘These figures show all too clearly how hamstrung the Home Office is by the current human rights legislation and how badly reform is needed in order to keep the British people safe.’

Judges said criminals could avoid deportation if they would get poorer healthcare in their homeland than on the NHS.

It came in the case of a 33-year-old Zimbabwean drug dealer who used the European Convention on Human Rights to claim he would not receive life-saving treatment in Africa.

Miss Patel has ordered a review of asylum law that will force claimants – including criminals – to lodge all their arguments at the beginning of a case.

This would stop them from submitting ‘spurious’ claims under different areas of human rights law to delay their deportation.

The Home Office said more than 52,000 foreign criminals have been removed since 2010.

Those released into the community are subject to bail conditions with monitoring, including electronic tagging and telephone contact, it added.

A spokesman for the Home Office said: ‘Foreign national offenders should be in no doubt of our determination to deport them. But as the Home Secretary made clear in Parliament earlier this week, tougher action is needed.

‘The process is complicated, and there are barriers to overcome, but we are actively looking at all options, including legislative changes.’

Jihadi in bid to overturn ban on early jail release

A prisoner has launched a legal bid to overturn a new law that prevents early automatic release of terrorism offenders.

They claim the law is directed against those holding ‘particular Islamic beliefs’ and has a ‘disproportionate impact’ on Muslims.

Justice Secretary Robert Buckland says it is not discriminatory and the challenge should be dismissed.

Khan, from Sunderland, was given a four-and-a-half-year jail term in 2018 after pleading guilty to encouraging acts of terror and inciting religious hatred via social media.

Terror prisoners now have to serve two thirds of their sentence before being considered for release – rather than half – and must win approval from the Parole Board. The hearing in the High Court continues.

Tributes to grandmother, 96, who died at crisis-hit care home

We reveal the most reliable hybrid and electric cars you can...