Police in Connecticut are investigating a possible hate crime after a white man was caught on camera claiming that he was being ‘harassed’ by a group of black men, and yelled: ‘White lives matter too!’

The incident took place on Saturday at Cove Island Marina in the affluent town of Stamford.

Darnell Crosland, attorney for the group of five black men – one of whom is a police officer – said the group met in the park to celebrate two of their birthdays.

He said the white man, who claims to be a neighborhood police, pulls up to the group and yells that they can’t have their boat there, which leads to the confrontation.

‘What is wrong with you?’ one of the black men asks. ‘No one was in the water. Just relax.’

Not shown in the video but supported by photos provided by witnesses are claims that the man attempting to spray mace or pepper spray at the group.

When he walks towards one of the young men, he squares up to him, with his phone to his ears, and says: ‘What are you going to do to me? Oh yeah?’

One of the other black men attempts to calm the white man down, saying: ‘Hey, back it up.’

The white man carries on talking into his phone, and says: ‘I am being harassed by a bunch of black men here.’

The white man then tells the person on the phone that he has a boat in the marina, and has a right to get to his boat.

‘They came down here to sit on the boat in the parking lot, apparently.’

The man filming says: ‘Who said we were going to put the boat in the water? We’re hanging out.’

The black man laughs and says: ‘The nerve of this guy.’

The white man yells: ‘A bunch of black guys harassing me. White lives matter too!’

The black man laughs at him again, and says: ‘You’re going viral.’ 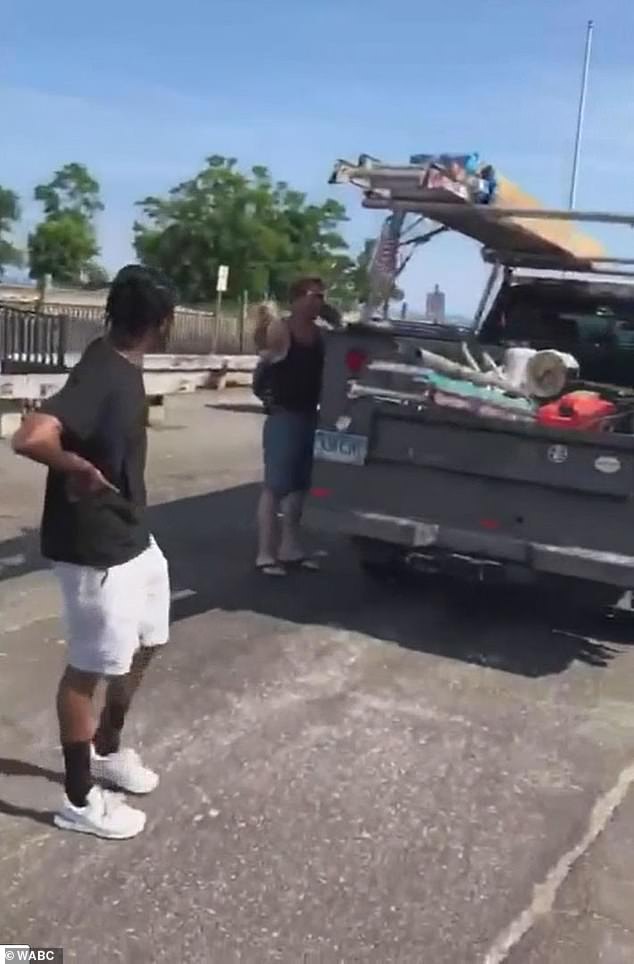 Two of the black men, who are cousins, spoke out at their attorney’s office.

‘I felt afraid,’ said Tarae Frazier, speaking to ABC. ‘Had a couple flashbacks of videos that we’ve all seen in the same particular situation, and I still don’t feel comfortable.’

The group members say they were only meeting up at the park before heading to another beach.

‘We shouldn’t have to be fearful of our lives going out of have fun,’ added Tyshawn Frazier. ‘My birthday is on Juneteenth, so we went to the beach to have a good time, to have a great b-day weekend.’

‘What this gentleman knew was that he can weaponize the 911 system, just like the lady in Central Park did, and so he doesn’t have to pull a gun anymore,’ their attorney, Crosland, said.

‘Because of the system that is built on racism and prejudice, he was able to just call 911.’

Police have confirmed that they are investigating.

‘This incident is currently an active investigation,’ said Lt. Tom Scanlon, head of the Bureau of Criminal Investigations with the Stamford Police Department.

‘Numerous individuals were involved and or witnessed circumstances leading up to the confrontation that had occurred,’ he said.

‘The Department is in the process of interviewing and obtaining formal statements from all involved individuals and sourcing a complete video as evidence.’

The white man has not been identified because his wife reported they are being harassed as a result of the video.

Trump is bringing back his rallies within DAYS claims his campaign

UK campsites are all set to welcome guests and these ones are pitch perfect from...

Fans congratulate Jennifer Hawkins on the sale of her $20million Sydney...

BAZ BAMIGBOYE: Get your coat Joseph, we’re out of here for...