Lucky tradie who still lives at home with his parents gives epic response after scooping $110,000 on Sunrise’s Cash Cow competition

A western Sydney mechanic has started the working week $110,000 richer after scooping the biggest Sunrise Cash Cow windfall so far this year.

Harshith Kumar was already at work at a car dealership in Blacktown when he answered a call from Channel Seven’s Sunrise team early Monday morning.

He was initially lost for words when excited host Natalie Barr told him he had won $110,000, which is tax-free.

The Sunrise Cash Cow couldn’t contain his excitement after the $110,000 jackpot went off

‘No way, get out of town!’ a shocked Mr Kumar eventually replied.

‘That’s crazy. I’m speechless to be honest. I don’t know what to say.’

Mr Kumar told the hosts he’d been entering the competition for ten years.

He still lives at home with his parents and plans to share his win to help them out and conceded it will be his shout at the pub after work this afternoon.

The Sunrise Cash Cow giveaway skyrocketed to its highest amount offered so far this year after 10 consecutive winners didn’t pick up the phone within three rings.

‘This hardly ever happens… in the show’s history it’s only happened a handful of times,’ Ms Barr told viewers on Friday.

‘At this time particularly with people losing their jobs and going through economic hardship, $110,000 would be extraordinary,’ newsreader Edwina Bartholomew added.

The Sunrise Cash Cow returns on Tuesday with $10,000 up for grabs, which will increase to $20,000 on Wednesday if the randomly selected winner doesn’t answer within three rings. 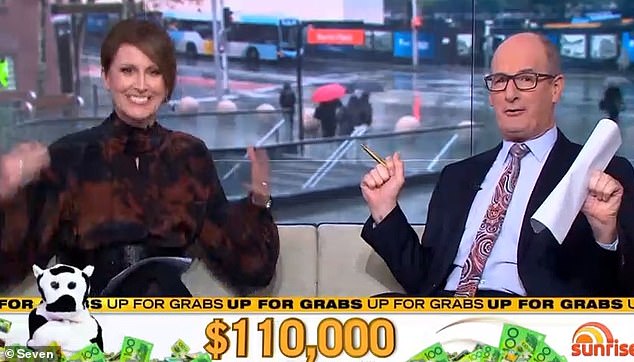 Environment: Toxic chemicals released from car tyres into rivers are killing off salmon

RICHARD LITTLEJOHN: Mitch Murray is being honoured with a set of stamps recalling his...

Victorian unemployment tipped to hit 11 per cent as Stage 4...

Ashley Banjo brushes off backlash with family snap as complaints for...