Some TV shows are hailed as timeless, but for others ‘outdated’ themes and ‘problematic’ storylines means they have not aged well.

During lockdown many have found comfort in watching their favourite old shows, but some have noticed uncomfortable content prompting them criticise the programmes on social media.

The gripes include scenes of ‘normalised abuse’ in Gossip Girl after Chuck Bass’s attempted rape was overlooked, as well as Sex and The City characters claiming that bisexuality is ‘greedy and not real’.

Here FEMAIL reveals examples of the shows viewers have found disturbing since re-watching them over the pandemic.

After revealing he was attracted to men, Bree tries to convince Andrew to enroll in Christian conversion counselling – however her son refuses saying ‘I’m not confused. I know exactly who I am.’

This deeply upsets Bree, who tells him he has to change or he will not be able to stay with her, and after Andrew seduces Bree’s boyfriend she abandons him on the side of the road.

In the scene she says: ‘Every child deserves to be loved unconditionally, and I thought that was the kind of love I had for you. Maybe if I had it would have been different’.

Later she adds: ‘I just can’t be around you anymore I’m not strong enough.’

One user said of the scene: ‘Andrew is the best character in Desperate Housewives for blackmailing Bree when she tries to send him to boot camp for being gay.’

‘Desperate Housewives spoilers WHY has Bree not got any flack for abandoning her kid for being gay?’, added another. 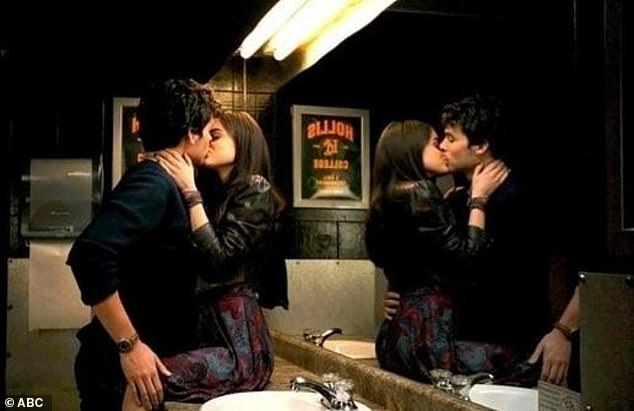 Drama series Pretty Little Liars ran from 2010-2017 and follows the lives of four high school girls whose lives falls apart after the disappearance of their friend Alison (Sasha Pieterse).

Throughout the show, Aria (Lucy Hale) has an inappropriate relationship with her adult teacher Ezra (Ian Harding) and after a tumultuous relationship, the pair end up getting married.

The show is set in Pennsylvania where the age of consent is 16, but only allows 16 and 17 year-olds to consent to those under the age of 18.

Originally, viewers are led to believe that 20-something English teacher Ezra had no idea 16-year-old Aria was underage when the pair met in a bar and had sex in the bathroom.

However in season four of the show, it’s revealed that the teacher knew all along that Aria was under the legal consenting age and was in fact trying to grow close to her to get information about her dead friend.

Several viewers have pointed out the inappropriate relationship, accusing the show of ‘promoting rape culture’ by normalising such behaviour.

‘Can we talk about how problematic the relationship between Arya and Ezra was on Pretty Little Liars?, wrote one.

‘It taught young impressionable women that it’s normal/ hot for your older 30+ year old teacher to want to f*** you. It romanticized paedophelia and promotes rape culture’, said another. 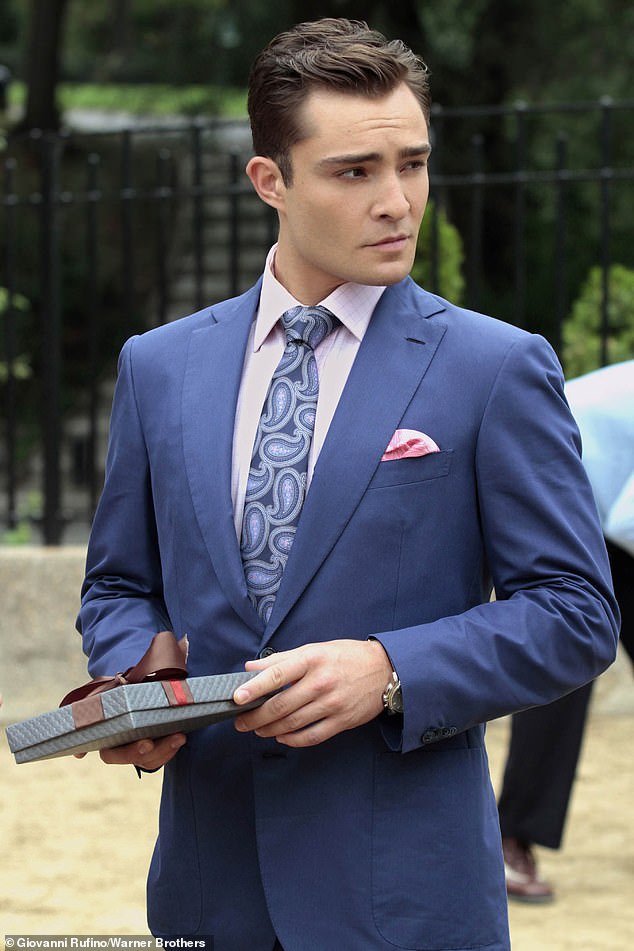 In the show’s  first episode, character Chuck Bass (Ed Westwick) is seen attempting to rape fourteen year-old-Jenny Humphries (Taylor Momsen), who narrowly escapes the assault after being pinned down on a nightclub roof

Teen drama Gossip Girl about the scandalous lives of Manhattan’s elite ran from 2007-2012 followed a group of rich teenagers living in New York.

In one of the show’s episodes, character Chuck Bass (Ed Westwick) is seen attempting to rape fourteen year-old-Jenny Humphries (Taylor Momsen), who narrowly escapes the assault after being pinned down on a nightclub roof.

Despite the assault, there are no ramifications of his actions and the character continues to objectify women and behave in an entitled and misogynistic throughout the series.

His character is even seen sleeping with Jenny once again later in the series, with nearly no mention of the former assault.

Viewers called out the show for normalising the abuse and acting as if Chuck were a ‘new man’ simply because he was a teenager when the assault took place.

One wrote: ‘Rewatching Gossip Girl and I completely forgot about the plot line where chuck tried to rape Jenny when she was 14 and then later everyone finds out and is like, oh well, the past is in the past, we should forgive him, he’s a new man?’.

How I Met Your Mother 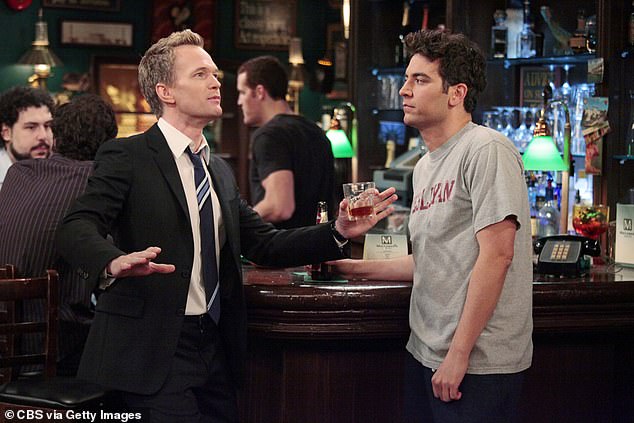 Pictured, Ted (Josh Radnor) and  Barney (Neil Patrick Harris) in a bar on How I Met Your Mother

The show has come under fire for it’s tone deaf comments about women, particularly from chauvinistic character Barney – whose womanising extends to an entire episode dedicated to his ‘Playbook’ of how to manipulate women into sex.

In season 4, episode three, Barney attempts to pick up a woman by pretending to be a lesbian which Twitter users have claimed is a prime example of why the character was ‘very problematic’.

The user said: ‘How I met your mother 5.5/10 -I discovered the LGTB community because of it -it was because Barney wanted to go to a lesbian club -very problematic -A really big part of my childhood.’ 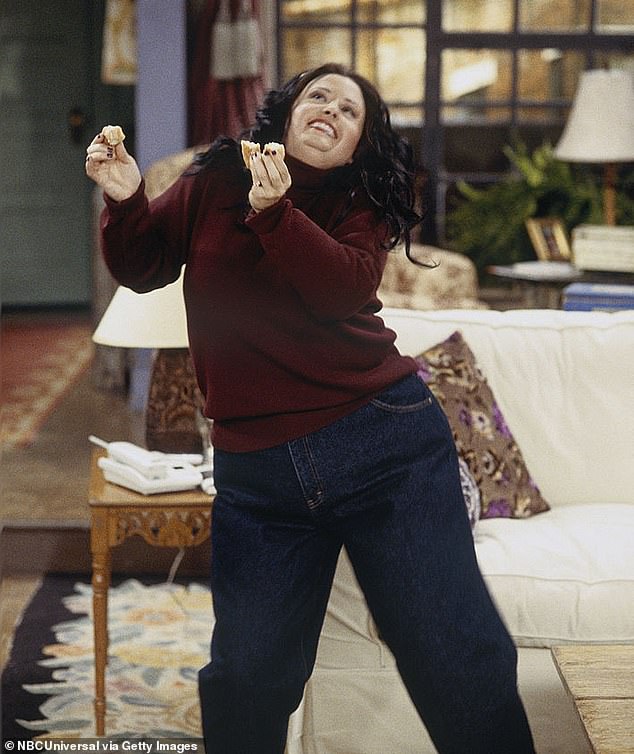 Pictured: Courteney Cox as Monica Geller while overweight during a flashback scene of ‘Friends’ 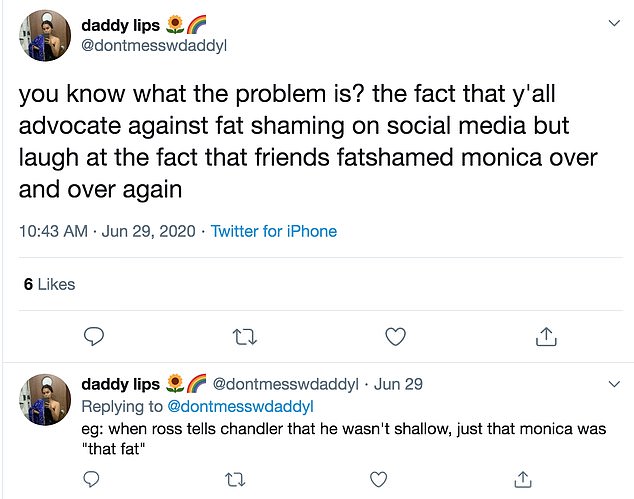 Cult classic television sitcom Friends is one of the most popular in history, however since it’s arrival on Netflix, it’s come under fire for some of it’s ‘problematic’ scenes.

One trope which has struck a chord with recent viewers is the constant ‘fat-shaming’ of character Monica (Courtney Cox) who used to be overweight.

In one episode, Monica overhears Chandler (Matthew Perry) saying he doesn’t want to be left in the house with his ‘fat sister’, encouraging Monica to lose weight and later marry Chandler.

‘You know what the problem is?’ , wrote one user, ‘The fact that y’all advocate against fat shaming on social media but laugh at the fact that friends fat-shamed Monica over and over again.’

The user points out an example of : ‘When Ross tells Chandler that he wasn’t shallow, just that Monica was ‘that fat”.

Another user highlighted scenes where Monica is teased over her binge-eating, ‘knowing she has a problem’ with her relationship with food.

The user said: ‘I love Friends but the one thing I hate about it is how the characters make fun of fat Monica and tease her with food, like in season three when Ross is selling the girl scout cookies and he knows she had a problem with binging on them.’ 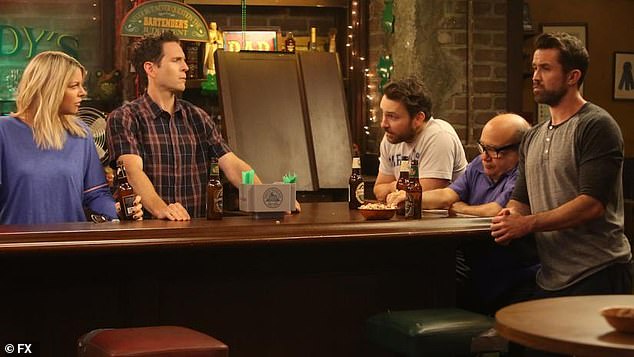 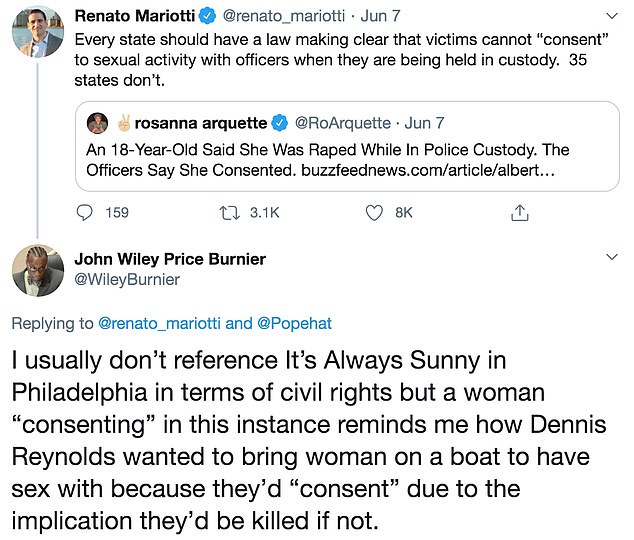 Replying to an article about incarcerated women being unable to give sexual consent, one user wrote: ‘I usually don’t reference It’s Always Sunny in Philadelphia in terms of civil rights’

It’s Always Sunny in Philadelphia is an American sitcom that premiered in 2005 and is the longest-running live-action comedy series in American television history.

In season five episode, ‘The Gang Buys a Boat’, womaniser Dennis (Glenn Howerton)  is heard explaining his theory about sexual consent, claiming woman aboard a boat would not say no to intercourse  ‘because of the implications’.

Character Mac (Rob McElhenney) gets confused at the dark nature of the subject, as the ‘implication’ sounds an awful lot like rape on the open ocean should the woman refuse.

Replying to an article about incarcerated women being unable to give sexual consent, one user wrote: ‘I usually don’t reference It’s Always Sunny in Philadelphia in terms of civil rights.

‘But a woman ‘consenting’ in this instance reminds me how Dennis Reynolds wanted to bring woman on a boat to have sex with because they’d ‘consent’ due to the implication they’d be killed if not.’

Sex and The City 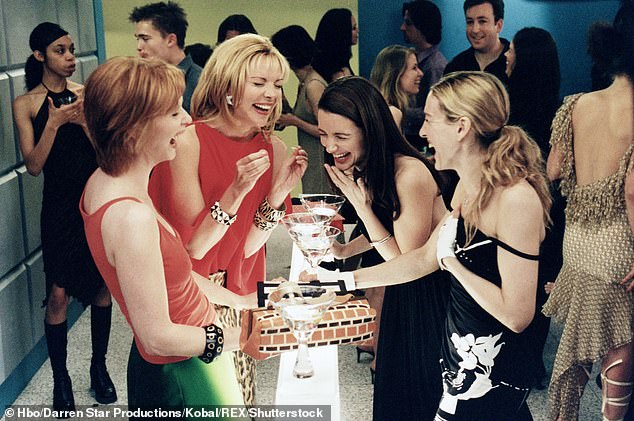 Pictured, Cynthia Nixon, Kim Cattrall, Kristin Davis and  Sarah Jessica Parker  on the set of Sex and The City

Sex and The City was broadcast on the HBO network from 1998 until 2004 and revolves around the sex lives of four women living in New York City.

After discovering the man she was dating is bisexual, Carrie (Sarah Jessica Parker) says that it’s ‘weird’ he was so open about his sexuality, and claimed that bisexuality didn’t even exist.

Discussing the revelation over lunch, she says: ‘The weird thing is he was so open about it, you know, “hi, i’m a bisexual” like “Hi i’m from Colorado or something”.’

Viewers took to Twitter to share their anger over the ‘problematic’ show, with one saying that scene in particular had not aged well

Later, she adds: ‘I’m not even sure bisexuality exists, I think it’s just a layover on the way to gaytown. When did this happen? When did the sexes get so confused?’.

Menawhile Miranda (Cynthia Nixon) accuses her date of being ‘greedy and double dipping’ while Charlotte (Kristin Davis) says the man should ‘pick a side and stay there’.

Sharing the clip on Twitter, one user wrote: ‘I already didn’t like Sex and the City, but OOOOF this did not age well.’

The ultimate in fruity beauty? WATERMELON

Rudy Giuliani says he is on Remdesivir as he calls radio...