US officials opened an investigation into Mr Johnson after he made ‘generalisations about black men’ and ‘cringeworthy’ comments about the appearances of women, CNN reported.

But Mr Johnson tweeted: ‘These false claims of insensitive remarks about race and gender are totally inconsistent with my longstanding record and values.’ 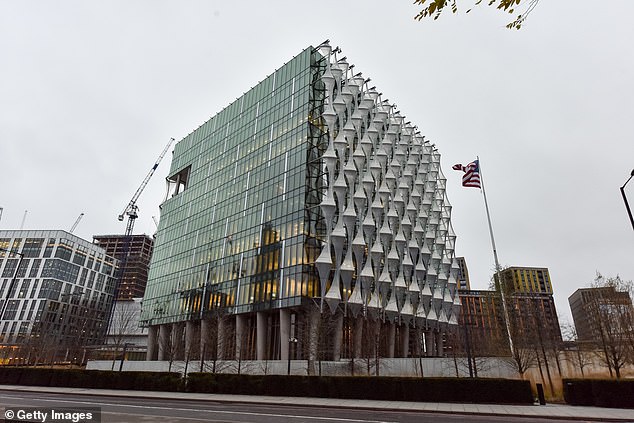 Staff at the American embassy in London recounted Johnson making racist comments about Black History Month and ‘cringeworthy’ comments about women’s looks. Early on during his London tenure he also worked out of a male-only club

He also appeared to dismiss that claim, writing online: ‘I have followed the ethical rules and requirements of my office at all times.’

Mr Johnson has been Washington’s ambassador in London since November 2017 and this week hosted US Secretary of State Mike Pompeo’s visit to the capital.

CNN reported Wednesday that Johnson questioned why the the black community celebrated Black History Month and asked, prior to a 2018 event, if the audience would be ‘a whole bunch of black people,’ a source said.

‘He’s said some pretty sexist, racist,’ things, a unnamed diplomat told the network, explaining what staff had told Office of Inspector General investigators who were looking into Johnson, who is an heir to the Johnson & Johnson fortune and a partial owner of the New York Jets. 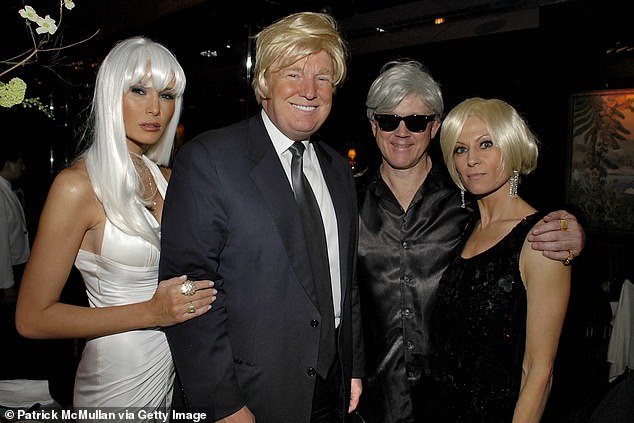 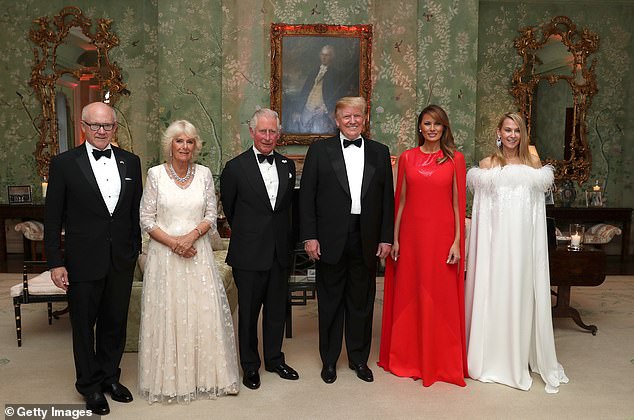 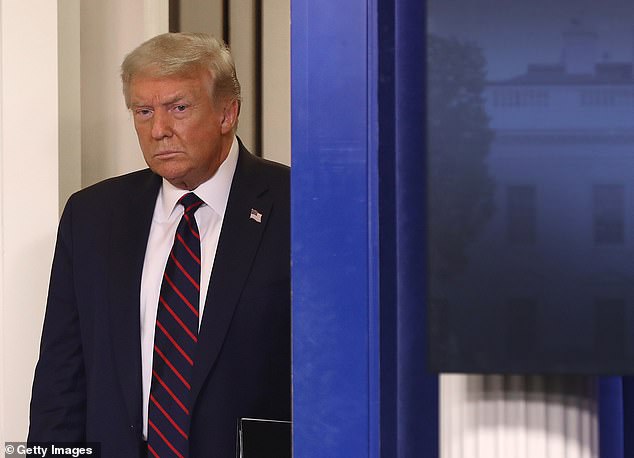 Three sources told CNN that during a conversation on Black History Month, Johnson argued that the ‘real challenge’ was black fathers not remaining with their families, leaving one official who heard Johnson’s comments ‘stunned.’

The incident was documented and told to two OIG inspectors and a supervisor.

Johnson was also no fan of International Women’s Day, sources told CNN, as the ambassador coined in a ‘feminist event,’ but allowed one to happen at the embassy anyway.

His comments on women’s looks were described as ‘cringeworthy,’ such as when he remarked to a crowd a few days after an October 2017 Estee Lauder-sponsored breast cancer event, ‘There was a prettier crowd here a few days ago with the ladies in pink and the breast cancer people.’

Johnson also started out his London tenure holding meetings in a male-only private club called White’s. The ambassador was eventually told by another diplomat in late 2018 that it wasn’t appropriate because female diplomats couldn’t join.

The comments were part of the same investigation that revealed Trump had asked Johnson to arrange for the British Open to be held at his golf resort in Scotland, despite event organizers overlooking the venue since he became president.

The New York Times reported Tuesday that Johnson had told multiple colleagues that the president had given him those instructions in February 2018, with Trump wanting the golf competition to be held at his Trump Turnberry Resort.

Three people with knowledge of the matter told the publication that despite the venue being eliminated as an option by organizers, and a warning from his deputy, Lewis A. Lukens, Johnson still felt pressured and asked the UK secretary of state for Scotland, David Mundell.

The lucrative event is run by the Royal and Ancient (R&A) Golf Association, who have given Trump’s course the cold shoulder since 2015 when he began his run for president.

Trump’s controversial rhetoric has seen the Trump course effectively blacklisted by the organization which governs world golf outside of North America. 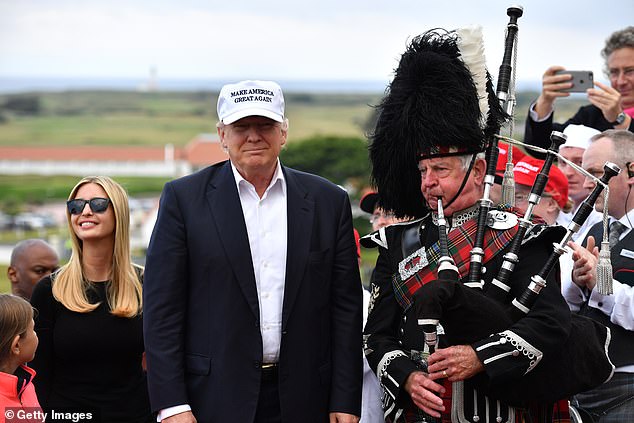 President Trump is pictured at Turnberry in June 2016. He reportedly tried to get the US ambassador to the UK to arrange for the British Open to be held at his golf resort in Scotland 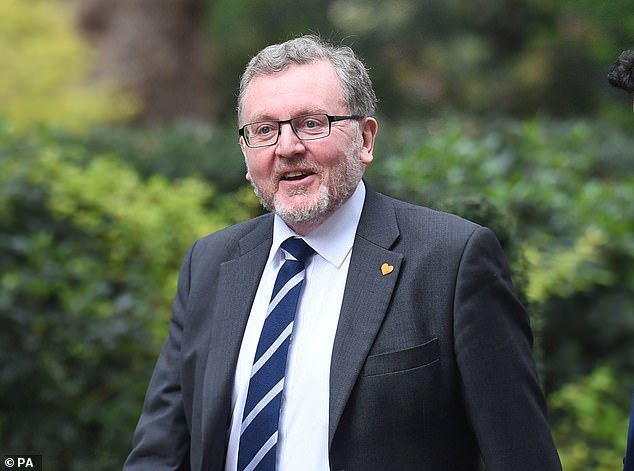 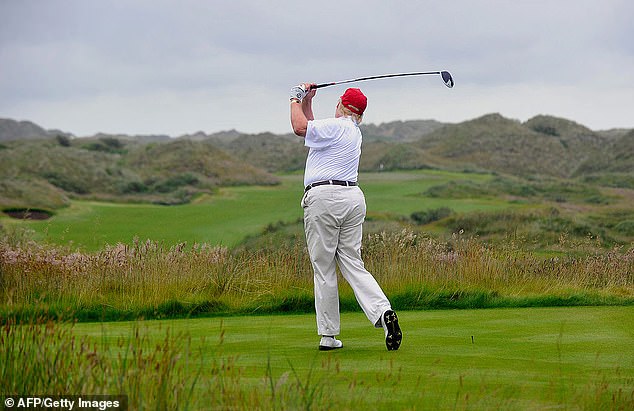 Trump is pictured at his Trump International Golf Links course in Aberdeenshire, Scotland, on July 10, 2012. That club is said to be operating at a loss as well as Turnberry and one in Ireland

In 2017, Martin Gilbert, the chief executive of Scottish Open sponsor Aberdeen Asset Management, told reporters that ‘politics aside, Trump would be an ideal venue – but you can’t put politics aside.’

The British government told the Times in a statement that Johnson ‘made no request of Mr. Mundell regarding the British Open or any other sporting event.’

However the publication points out that the statement did not acknowledge whether Johnson mentioned Turnberry, which Trump took ownership of in 2014.

Lukens – who was the acting ambassador up until Johnson arrived in November 2017 – emailed colleagues about what had happened and says he was forced out of his deputy role a few months later. Lukens’ role ended in 2019.

Colleagues told the Times it was after Lukens gave a speech at a British university that included a positive anecdote about President Barack Obama’s 2013 trip to Senegal when Lukens was the envoy.

The White House, State Department and Johnson declined to comment about what Trump’s instructions were regarding Turnberry for the Times’ report on Tuesday.

Under the Constitution’s emoluments clause, a president is not allowed to benefit from gifts of profit from foreign governments. 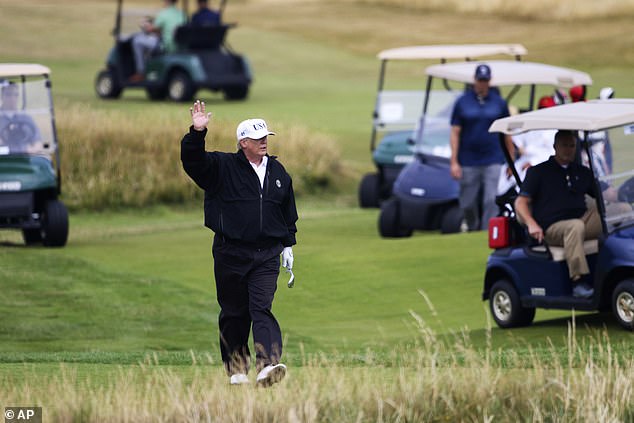 Under the Constitution, a president is not allowed to benefit from gifts or profit from foreign governments. Experts on government ethics say he may have profited from the U.K. government having to pay for security at the event

It’s unclear how much of an influence the British government would have had on the tournament.

The venue is selected by the R&A from a pool of 10 courses based on criteria such as readiness and public infrastructure.

The British Open is not scheduled to be held at Turnberry for at least the next four years but the Times reports that if it were, the Scottish or British government would have had to pay for security at the event.

That would in turn result in Trump’s club getting profit from the event being held there, experts on government ethics said.

President Barack Obama’s special counsel for ethics, and later as his ambassador to the Czech Republic, said it is ‘diplomatic malpractice’ to ask for a favor like Johnson is reported to have done. 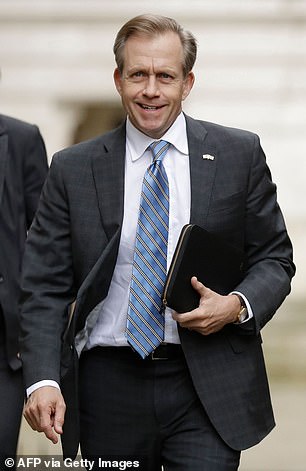 Johnson’s deputy Lewis A. Lukens emailed colleagues about what had happened and says he was forced out of his deputy role a few months later in 2019

‘Because once you do that, you put yourself in a compromised position,’ said Norman L. Eisen. ‘They can always say, ‘Remember that time when you made that suggestion.’ No experienced diplomat would do that.’

Trump has been the subject of criticism when it comes to his hotels potentially profiting off his American leadership.

The Pentagon admitted it was sending troops to stay at Turnberry for overnight layovers when they landed in Glasgow.

Trump’s 16 golf courses are believed to generate a third of the family revenue.

The Times reports that two courses in Scotland and one in Ireland are operating at a loss. After investing $150million on upgrading Turnberry, it lost $1million on $19million in sales in 2018.

Trump has also been criticized for encouraging Mike Pence to stay at his hotel in Doonbeg Ireland, last year, and choosing his Doral, Miami resort as the site of the G7 meeting that was ultimately canceled due to the coronavirus pandemic.

In addition people in town on government business have been hosted at his Washington D.C. hotel.

The State Department said Johnson has led the embassy ‘honorably and professionally.’

‘We stand by Ambassador Johnson and look forward to him continuing to ensure our special relationship with the UK is strong,’ the department said in a statement in response to the British Open story and CNN’s report on using racist and sexist talk.

Teachers, police officers and bus drivers could be prioritised for Covid vaccine after over-50s

Coronavirus UK: What do the new tiers mean for London and Manchester?

Teachers, police officers and bus drivers could be prioritised for Covid...

Coronavirus UK: What do the new tiers mean for London and...