By Ralph R. Ortega For Dailymail.com

A police officer kicked and dragged a woman during an arrest in a McDonald’s parking lot in San Jose, California, that was filmed by a DoorDash delivery man Wednesday.

The emergence of the footage, which includes a woman and two children pleading with the officer to stop, has now landed the cop on desk duty while an internal investigation over the use of force is underway.

At the time of the arrest at a McDonald’s at Santa Clara and 28th streets around 5.45pm Wednesday, cops armed with a seizure warrant had stopped the vehicle for eluding authorities that same day and previously on July 18, police said. It was not clear why police were attempting to stop the car.

The department chose not to identify the cop during the probe.

compliant, yet he kicked her while she was on the ground and then continued to punch her and then DRAG HER???? THIS WAS AT MCDONALDS ON SANTA CLARA IN SAN JOSE!!!!! pic.twitter.com/F0kywklXK5

A police officer kicked and dragged a woman during an arrest in a McDonald’s parking lot in San Jose, California, that was filmed by a DoorDash delivery man Wednesday. Pictured is an image from the footage of the woman on the ground during the arrest 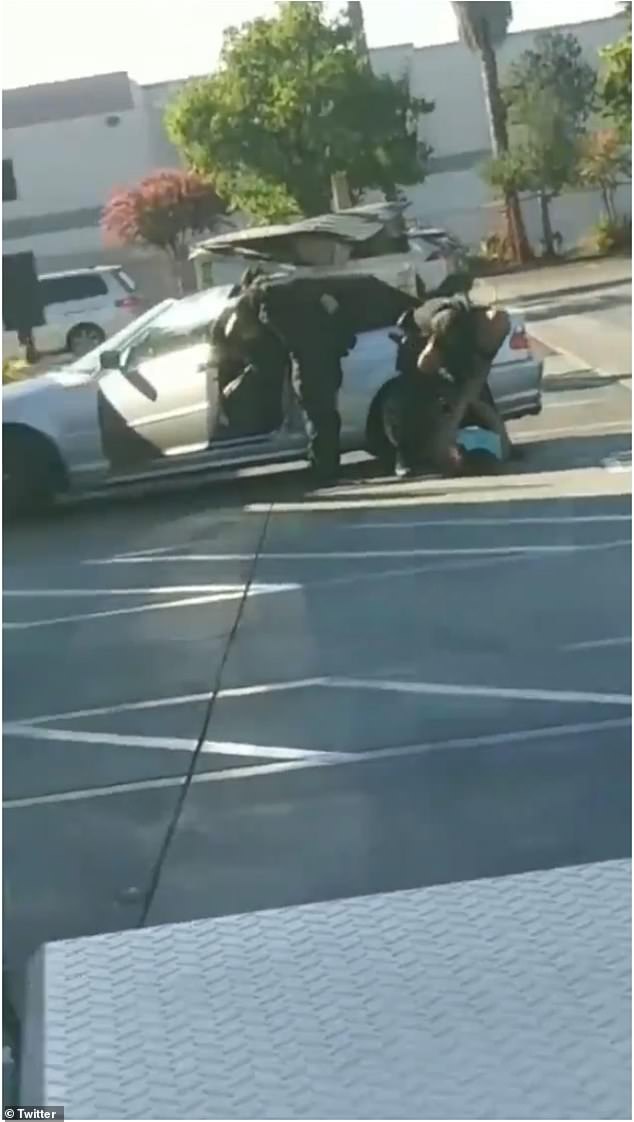 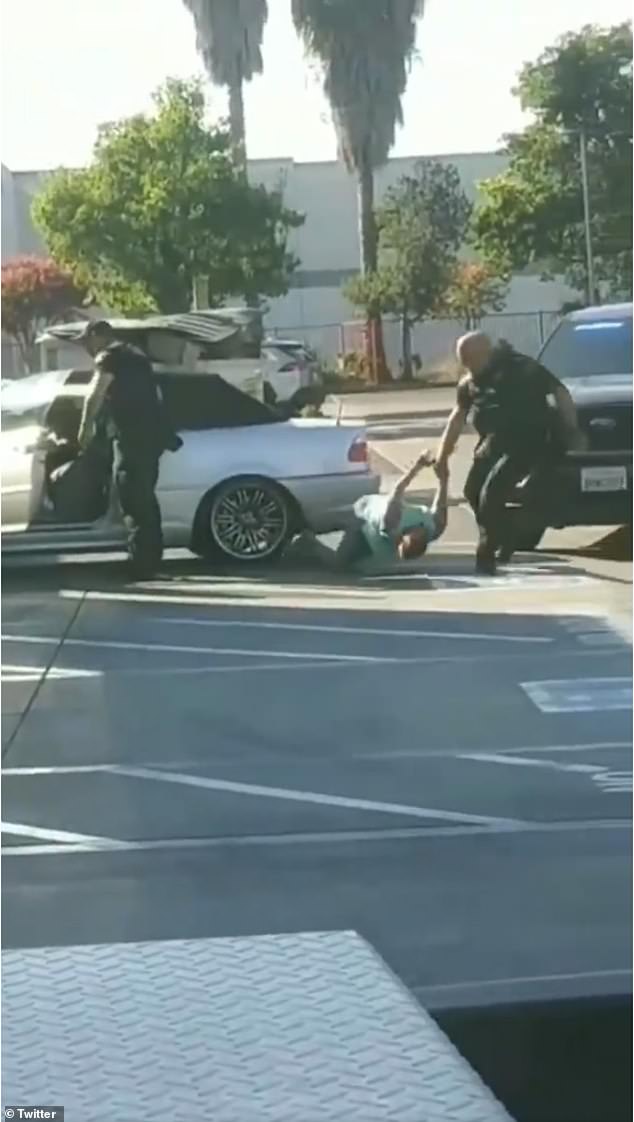 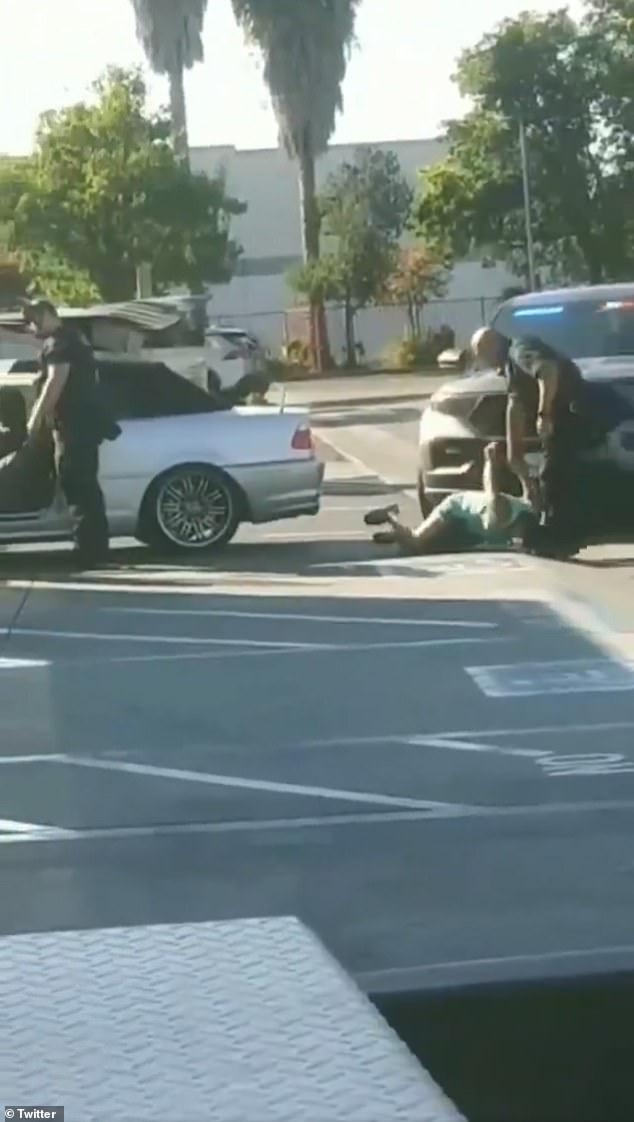 The footage shows the officer dragging the woman to a nearby, unmarked police vehicle 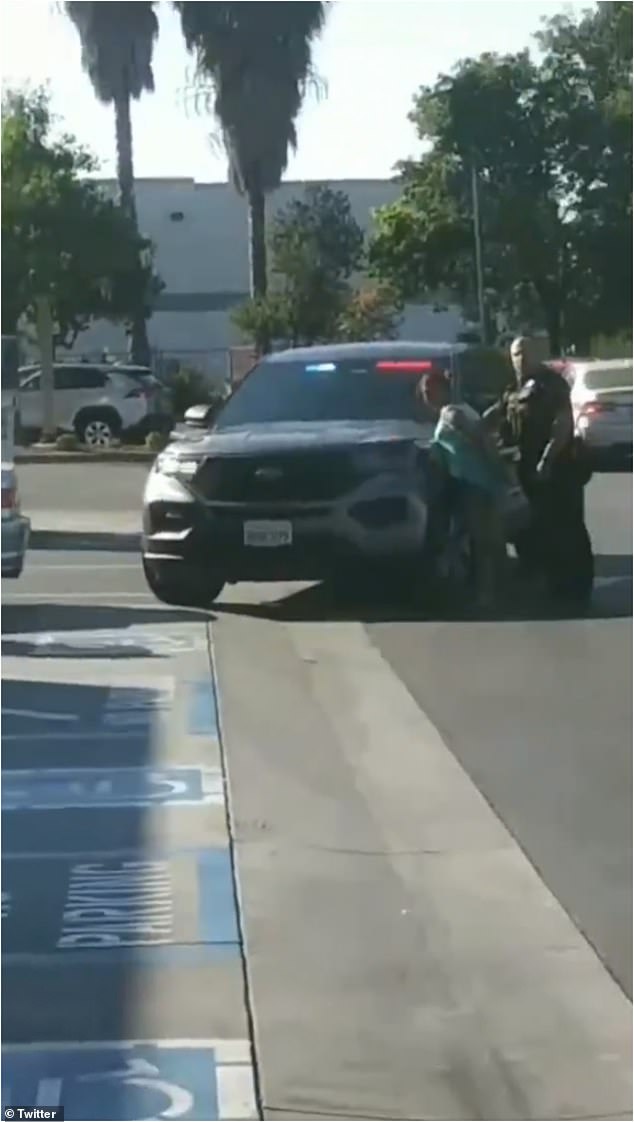 The woman appears in the footage, handcuffed and leaning against the police vehicle

The woman, Guadalupe Esperanza Marin, 39, was arrested on charges of driving on a suspended license, possession of paraphernalia and resisting arrest, the San Jose Spotlight reported.

A woman and two children, who were passengers in the vehicle during the traffic stop, were not charged and the vehicle was impounded.

Footage of the incident was shot by DoorDash employee Josh Gil as he was preparing meals for a delivery run.

‘I heard the cops pull up behind that woman. I think she was with a family member and two kids,’ he told San Jose Spotlight.

‘They pulled the guns out on them and demanded to get out of the car,’ Gil said.

The delivery man then described watching how a cop began kicking the driver.

‘He gave her, like, a spartan kick, like an unnecessary spartan kick to the stomach,’ Gil said ‘You just see her wind get knocked out right off bat.’ 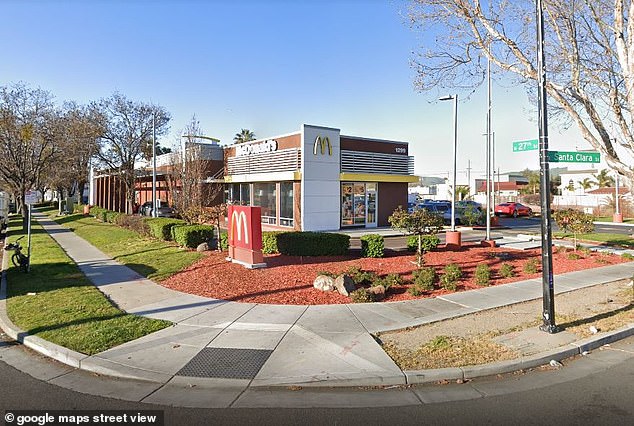 Gil said he believes cops suspected the vehicle was stolen. People can be heard in the footage saying that the car had just been purchased.

‘Even if she was guilty of the crime they suspected her of committing, they shouldn’t have used that excessive force on her because she was being compliant,’ Gil said.

Tatler says Somerset is becoming a magnet for celebrities

Pilots landing at LAX reported a ‘guy in a jetpack’ near them as they...

MATTHEW SYED: Why we must stop mollycoddling our children

Moment Nebraska police officers do the Cupid Shuffle after agreeing to...