Wanted: One articulate, telegenic (and, whisper it, preferably female) candidate to serve as an all-round flak jacket to the Prime Minister.

She/he must possess a laserlike focus for detail, a canny news sense, razor-sharp wit — and above all a hide like a white rhinoceros.

The successful applicant can expect to take home around £100,000 a year in return for the chance to ‘influence and shape public opinion’. (Book deals and lucrative media engagements will be a guaranteed post-employment perk.)

Yes, in case you hadn’t heard, an intriguing, first-of-its-kind vacancy was posted this week by Downing Street, which is seeking its own television spokesperson to deliver the Government’s message direct to the public.

Ridicule She/he (the fairer sex is said to be first choice to counter claims Boris Johnson has a ‘woman problem’ — not enough of them around him) will front a new, daily White House-style televised press briefing scheduled to start in October.

Whoever ends up being chosen — and a host of big name TV journalists such as ITV’s Julie Etchingham, Sky’s Sophy Ridge and the BBC’s James Landale have been mooted — you can bet there’ll be no shortage of applicants.

You only have to glance across the pond to see what a nifty route to fame and fortune the equivalent position — that of White House press secretary — can prove to be.

He became a sex symbol during his time in the White House and was even the target of Rachel’s (Jennifer Aniston) affections in Friends.

Dee Dee Myers, another Clinton protegee and the first female press secretary, went on to write a book, Why Women Should Run The World.

Donald Trump, perhaps inevitably, has gone through more press spokesmen than he has socks.

His first, little Sean Spicer, became a figure of national ridicule, lasting barely six months before being replaced by a series of very serious but not necessarily competent women.

His immediate successor, Sarah Sanders, was so inept that, while working in the U.S., I would cringe each day at the assault she had to endure at the hands of the White House press corps. 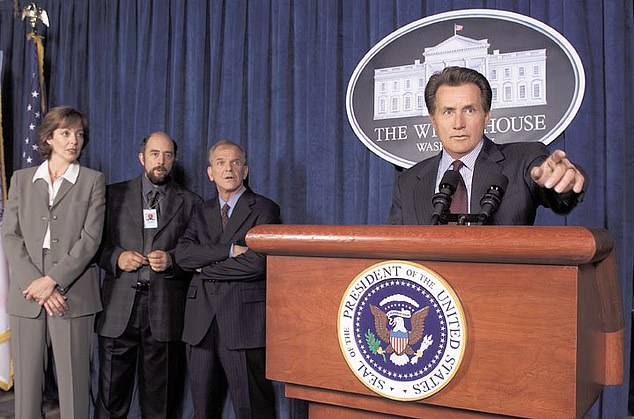 But however exciting an opportunity the new Downing Street post may be, we have to ask whether this televisual — not to mention highly presidential — form of government is, well, British?

Is it really the route we wish to see our politics go down? At the risk of sounding like a constitutional fuddy-duddy, it looks like yet another sharp kick in the sweetbreads for our time-honoured system of parliamentary democracy.

Slowly but surely, down the years we’ve seen Parliament’s authority eroded as successive governments have chosen to leak important announcements to the Press before making them to the Commons.

You may not be totally surprised to learn the rot set in under Tony Blair who loathed the scrutiny of the chamber.

Nowadays it is the norm. When, for example, was the last time you heard anything eye-catching in the Chancellor’s Budget you hadn’t read in the weekend’s newspapers?

With new TV briefings, we can expect to see the Commons being by-passed even further.

And there is something disconcerting about the Government employing a neutral ‘face’ to engage with the public, mainly as it devolves the Prime Minister (or fellow ministers) of responsibility for what is being said.

By having a spokesman announce, say, the latest unemployment figures, they are serving as a lightning rod for public anger rather than the PM.

There have been murmurings that Boris might even host the odd briefing himself — like a celebrity guest star in a sitcom.

Call me cynical but I wager this will happen only when there’s good news to announce, with Boris, like some sort of political Santa, rolled out only to impart cheer.

Perhaps a more apposite comparison would be that of a genial company chairman, who turns up on high days and holidays to press the flesh and inspire the troops, rather than a chief executive immersing himself in the nitty-gritty of running the country. 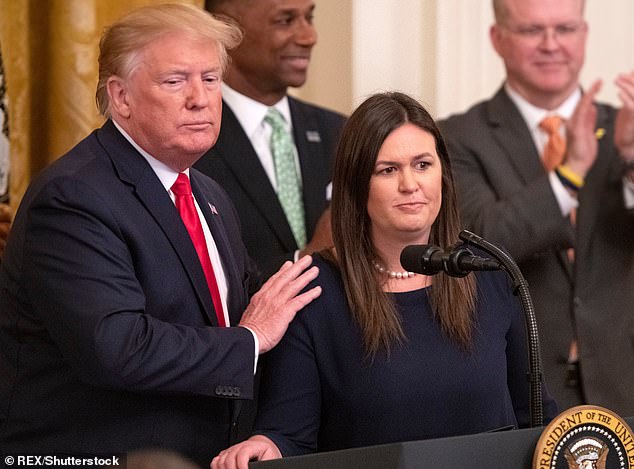 Donald Trump’s second White House Press Secretary, Sarah Sanders ‘was so inept that, while working in the U.S., I would cringe each day at the assault she had to endure at the hands of the White House press corps,’ writes Henry Deedes

Concerning, too, is the premise put about by No10 that the new initiative is inspired by the ‘success’ of the daily coronavirus briefings. It is true that for a while these daily updates received large tele­vision audiences well into seven figures.

Much of this, though, I’d ascribe to a concerned public locked up at home in genuine need of information rather than any form of engagement.

Having been required to sit through dozens of them myself I can attest they swiftly became non-events. Dull, repetitive, contrived and, worst of all, uninformative because no one wants to risk saying anything controversial.

Desperate The new briefings will, I am sure, follow a familiar path, of little interest to anyone bar Westminster eggheads and the 24-hour news channels desperate for something to fill their endlessly repetitive schedules.

Besides, when has politics ever been about entertainment? As this paper’s parliamentary sketch writer I’m required to find some moment of political drama in the Commons each day.

There are moments of gold, it is true, but one has to wade through a lot of dull mud to find it.

You can put all thoughts out of your head of that brilliant U.S. drama The West Wing, in which the President’s sassy press secretary C.J. Cregg litters her briefings with acid tongued one-liners. Ms Cregg, need I remind you, was played by a wonderful actress called Allison Janney and her words fed to her by the show’s creator Aaron Sorkin, one of the greatest dialogue writers in TV history.

If the coronavirus updates are anything to go by then these Downing Street briefings are likely to be dominated not by witty, light-hearted banter but hordes of journalists asking long-winded questions, all trying to out-Paxmanise each other in the hope of impressing friends and family while preening for the cameras.

Such an atmosphere has but one outcome: whoever is at the lectern becomes defensive and less likely to engage. 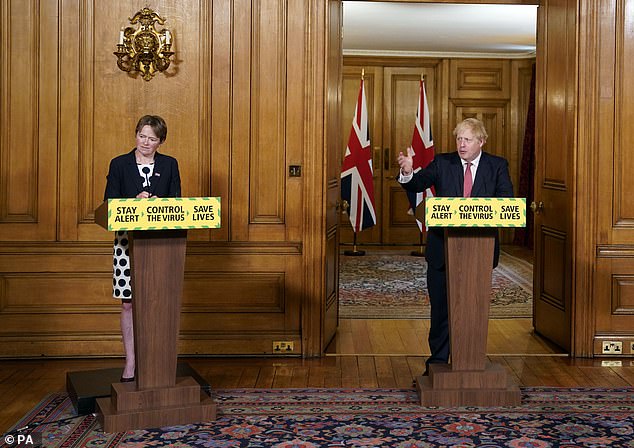 Deedes: ‘If the coronavirus updates are anything to go by then these Downing Street briefings are likely to be dominated not by witty, light-hearted banter but hordes of journalists asking long-winded questions’

With the cameras rolling, they will eventually bark out some nonanswer and move on. Shadowy Which raises the question of why get rid of the system that is already in place?

Currently, at around 12pm each day, lobby journalists gather in Downing Street to be briefed by a No10 official on the government business at hand.

This takes place behind closed doors and is open only to a select group of reporters.

Yes, I hear you groan, all very shadowy and secretive.

But such conditions allow a government spokesman to consult his or her notes, to take time to think about the questions asked and deliver proper answers, not sound bites.

It is not perfect by any means, but it has served our politics well enough up until now.

The old ‘why fix it if it ain’t broke’ reasoning may sound tepid but it is invariably the strongest argument for keeping something in place.

Which is why it is almost impossible not to imagine the saturnine presence of the Prime Minister’s senior aide Dominic Cummings being behind all this.

We know Mr Cummings has a ‘year zero’ approach to government bordering on the psychopathic.

It means ripping up anything regarded as the status quo.

The new briefings will increase transparency, we are told, with Downing Street speaking direct to viewers.

But rest assured such valiant ideals and Cummings go together like oil and water.

Far from boosting our democracy, I can’t help but feel this new style of government via TV is being fashioned to diminish it.

Post-Brexit hiccups ‘will add £1.50 to a bottle of fine wine’

Britons are urged to stay away from beaches today with dry, sunny weather and 66F highs

Boy, 17, is shot dead just three blocks away from the intersection where George Floyd was killed

Post-Brexit hiccups ‘will add £1.50 to a bottle of fine wine’