British nationals are among those affected by the huge explosion that rocked the Lebanese capital Beirut today, it has been confirmed.

A Foreign Office spokesperson said a small number of staff sustained non-life threatening injuries in the explosion and are receiving medical attention where necessary.

The Prime Minister said the Government is ‘ready to provide support in any way we can’ following the blast that has killed at least 73 people.

At around 6.30pm local time, a warehouse in the Port of Beirut that was already on fire blew up, sending out a shockwave for several kilometres.

The impact was catastrophic, ripping apart buildings and car and smashing windows. People on the island of Cyprus reported hearing two explosions in quick succession.

The British embassy is just two kilometres away from the scene of incident, in the densely-packed city centre.

In a tweet, Mr Johnson said: ‘The pictures and videos from Beirut tonight are shocking. All of my thoughts and prayers are with those caught up in this terrible incident.

‘The UK is ready to provide support in any way we can, including to those British nationals affected.’ 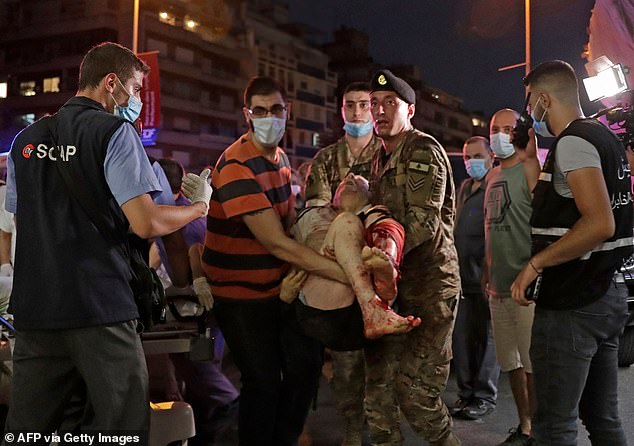 Videos of a huge mushroom cloud rising above the Middle Eastern city were shared extensively on social media on Tuesday evening local time.

Foreign Secretary Dominic Raab said: ‘My thoughts and prayers are with those affected by the devastating explosion in #Beirut today.

‘The UK stands in solidarity with the people of Lebanon and is ready to offer help and support including to those British nationals impacted.’

The British Embassy said it was in contact with local authorities and urgently seeking further information, adding that there is ‘significant disruption’ across Beirut.

‘Our sympathies are with the Lebanese people and all those affected. We standby to provide support to British nationals who need it.’

At least 10 seagulls steamrolled by car in Maryland parking lot

The Voice Australia: Boy George rants Delta Goodrem is ‘dead to him’

How we women would solve the coronavirus crisis