A Miami Beach police officer filmed sucker-punching a black man outside of a restaurant two years ago has been cleared of any wrongdoing by internal affairs and state prosecutors – but two officers who filmed and shared footage of the shocking altercation have been disciplined.

Officer Adriel Dominguez has now returned to work after being relieved of patrol duties during an investigation into the December 2018 incident, when he was filmed punching unarmed homeless man, Lowell Poitier Jr, 35, in the face.

Miami-Dade State prosecutors determined that Dominguez used the appropriate amount of force after he was reportedly threatened by Poitier Jr after asking him to leave the Pelican Hotel Restaurant.

However, Officer Alfredo Garcia, who was with Dominguez at the scene, was issued a written warning by Internal Affairs investigators last month for ‘producing and distributing an unauthorized version of recordings’ from his body camera, the Miami Herald reported.

Garcia used his cellphone to record the footage from his body camera, then posted it on social media before later deleting the post.

A second officer, Frederick Dominguez received notice of a 10-hour suspension for releasing a copy of the tape made by Garcia to his attorney, Michael Pizzi. He told Pizzi to forward the clip to the ‘proper authorities’ and seek whistleblower protection for him.

Officer Adriel Dominguez has now returned to work after being relieved of patrol duties during an investigation into the December 2018 incident, when he was filmed punching unarmed man, Lowell Poitier Jr, 35, in the face

Officer Frederick Dominguez, who is of no relation to Adriel Dominguez, has so far refused to serve his suspension and continues to fight back against it.

Prizzi, meanwhile, has blasted the Internal Affairs department for their finding against his client and the Miami-Dade State Attorney’s Office for failing to prosecute Adriel Dominguez.

‘What a disgrace. Based on the way this was handled, it’s open season on innocent people,’ Pizzi told the Herald. ‘It’s outrageous.’

A public records request filed by the outlet revealed that Adriel Dominguez was cleared by prosecutors last October, after they determined the officer could have believed Poitier Jr was ‘about to hit him.’ 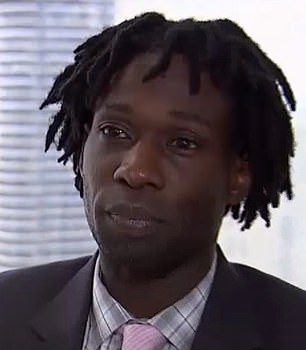 Poitier suffered a cut lip as a result of the punch and was initially charged with misdemeanor assault on a police officer, resisting arrest without violence and disorderly conduct. The charges were later dropped

In the footage shared by Garcia nearly two years ago, Poitier Jr. is seen getting out of his seat and snatching something off of a menu stand outside of the Pelican Hotel Restaurant.

The two men then come face-to-face with one another as Poitier yells, ‘what, what’.

That’s when Officer Adriel punches him in the face, sending Poitier crashing to the ground.

Reports at the time described Poitier as a homeless man from Orlando who has a history of mostly non-violent arrests, in addition to domestic violence charges.

Authorities said the confrontation, which took place on December 3, began when customers and staffers at the restaurant told police that Poitier was irate and refused to leave.

The responding officers were told by customers that Poitier was calling two women ‘f***king gringas’, which is a Spanish word that means white women. 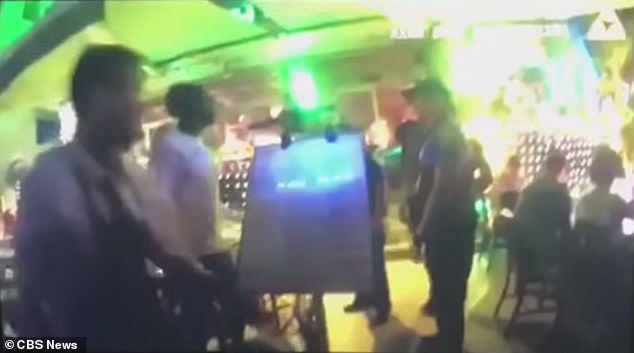 Poitier (left, in white) is then seen getting out of his seat and snatching something off the menu stand in front of the restaurant 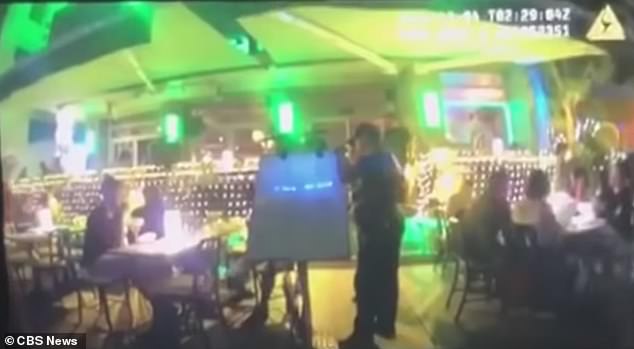 Officer Adriel Dominguez (center), who is unrelated to Officer Frederick Dominguez, who reported him, is seen in the video appearing to speak to Poitier while he’s sitting down at a table at the Pelican Hotel restaurant 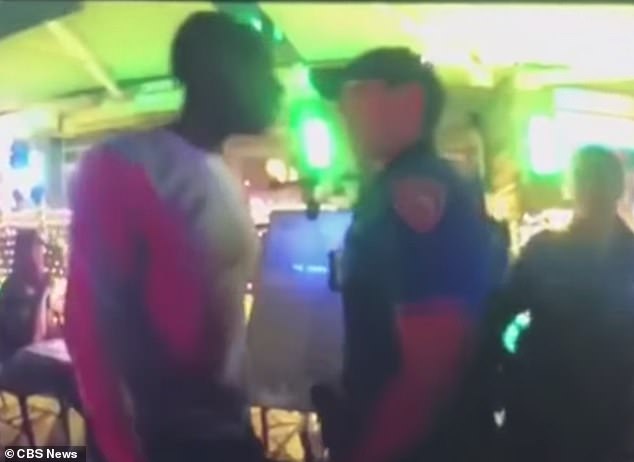 The two men then come face-to-face with one another as Poitier yells, ‘what, what’

In police report of the incident, officers said Poitier was agitated, ‘clenched his fist, took a fighting stance and leaned into’ Officer Adriel’s face.

Poitier also allegedly swore at the two officers and called then ‘crackers’.

The arrest report also said that Officer Adriel feared for his safety and subsequently punched the man in the face.

But Garcia’s video appeared to contradict the chain of events described in the police report. Poitier is heard yelling ‘what, what’ but he doesn’t appear to try and fight Adriel.

When the video first surfaced, city officials voiced their shock over the altercation but warned the public not to rush to judgement and allow investigators to do their jobs.

Poitier suffered a cut lip as a result of the punch and was initially charged with misdemeanor assault on a police officer, resisting arrest without violence and disorderly conduct. The charges were later dropped.

In a statement to the Herald, Miami Beach Police Chief Richard Clements said police work ‘doesn’t always look good’, but the actions of Officer Adriel falls within the guidelines of what police are trained to do.

‘He was in what the officer perceived to be a fighting stance. In that case the officer reverted back to his training. It was a distractionary blow,’ Chief Clements said.

As for Garcia and Frederick Dominguez, Clements said the two officers violated the department’s body cam policy, and have, in his opinion, been rightfully punished.

Poitier’s attorney, David Kubilium, told the Herald his client plans to file a civil rights lawsuit against the department and the city in the next few weeks, arguing that Officer Adriel did indeed use excessive force.

Dorinda Medley reveals she will ‘always love John’ in exclusive look at the new...