Pub crawls could be banned across Scotland to prevent the spread of coronavirus after an outbreak of cases linked to bars, Nicola Sturgeon warned today.

The First Minister said her government was researching how to tighten up rules for hospitality businesses after Aberdeen was put back into lockdown.

Pubs, cafes and restaurants have been ordered to shut by 5pm and people are banned from travelling in and out of the city in the north east, home of the Scottish oil industry.

Addressing the public at a press conference this afternoon, Ms Sturgeon said: ‘It could be that what we see here is a pattern which involves people going from one pub to another in the same night.

‘Now it may be that we have to look at some of those lessons to think about whether we need to tighten up some of the restrictions about how hospitality is operating across the wider country.

‘I don’t want to rush to conclusions on that but equally I want to make sure we are fairly rapidly doing some assessment of that nature. I may have more to say on that later in the week.’

According to the First Minister, more than 20 other pubs and restaurants are involved in the cluster.

The First Minister said her government was researching how to tighten up rules for hospitality businesses after Aberdeen was put back into lockdown. 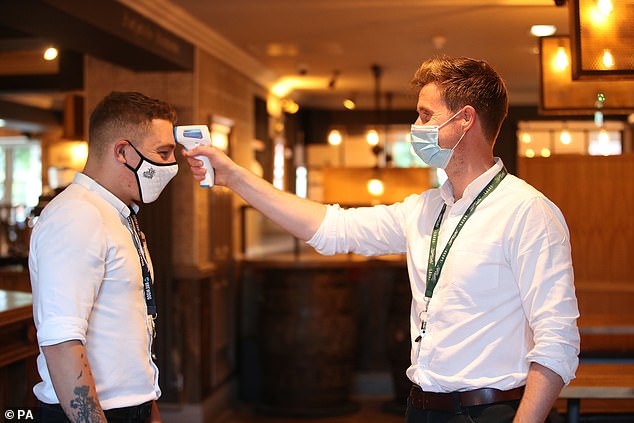 Scottish pubs reopened a month ago with safety measures in place. But many cities have seen revellers ignore social distancing and other rules designed to combat coronavirus

She said the rise in cases heightens fears the Scottish Government is ‘dealing with a significant outbreak in Aberdeen that may include some community transmission’.

A five-mile travel rule has been put in place and residents are being told not to enter each other’s houses.

All indoor and outdoor hospitality venues have been told to close by 5pm tonight.

The measures, which apply to the Aberdeen City area, will be backed by government regulations, the First Minister said, and will be enforced if the rules are not followed.

Ms Sturgeon added the decision to reimpose some measures was taken to ‘prevent further spread and to give the Test and Protect teams the best possible chance of successfully breaking these chains of transmission’.

The First Minister said people should not travel to Aberdeen, but those who are already there can remain.

She added the changes will be reviewed next Wednesday, when she hopes they could be removed, either in entirety or in part.

British air hostess, 23, is arrested in Dubai and held in notorious jail over drugs bust

AMANDA PLATELL: Police close the Stephen Lawrence murder case, but I pray this isn’t the end

Jared Leto flashes his muscular chest in a half-open shirt as...

Studio 10’s Sarah Harris is given a sexy new makeover after...