Housing Secretary Robert Jenrick today angrily denied that his planning revolution will create ‘slums’ in order to hit the government’s target of 300,000 new homes a year.

The dramatic shake-up – billed as the biggest since the Second World War – vows to slash red tape and fast-track developments, while insisting they must be ‘beautiful’.

But it will also strip local councillors of power to decide on individual projects to overcome blocking, and impose binding central targets to force local authorities to allocate land for homebuilding.

The blueprint has been heavily criticised by charities, planning officers and architects who warned they could lead to a ‘generation of slums’ and kill off affordable housing projects.

But in a round of interviews this morning, Mr Jenrick dismissed the criticism as ‘complete nonsense’.

Speaking on Sky News, Mr Jenrick said: ‘Today it takes seven years to produce a local plan, we want to reduce that to around two and a half years.

‘And it can take five years to get spades in the ground on a housing estate. We believe that can be cut very significantly and everybody will benefit from that – the people who work in the industry and those people who want to get on the housing ladder as well.’

Asked whether the public will have less of a say on planning decisions, he added: ‘Well we want to have a meaningful local engagement and that is at the planning making stage. So what our proposals will do, it will mean that when the plan is being produced, there will be a really serious debate in a local community about where they want homes to be built.’

Under the plans, every area in England will be designated for either ‘growth’, ‘renewal’ or ‘protection’. In growth areas individual developments will not require planning permission, so the default position will be that homes can be built

In a round of interviews this morning, Robert Jenrick dismissed claims his planning overhaul could lead to ‘slums’ as ‘complete nonsense’

Mr Jenrick also took aim at the Royal Institute of British Architects’ description of the proposals as ‘shameful’.

‘That I’m afraid is complete nonsense. I saw those comments and they were put out before we’d even published the document.’

The proposals include fast-tracking approvals of housing projects that are ‘in keeping with local character and design’.

Developers will be able to skip stages of the planning process if buildings are based on designs in official pattern books drawn up by local authorities.

There will also be a requirement for all new streets to be tree-lined unless there are exceptional circumstances.

Under the plans, every area in England will be designated for either ‘growth’, ‘renewal’ or ‘protection’. In growth areas individual developments will not require planning permission, so the default position will be that homes can be built. 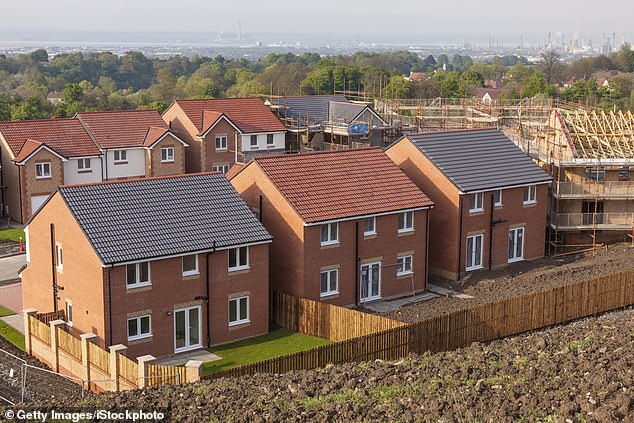 There will also be a requirement for all new streets to be tree-lined unless there are exceptional circumstances. Pictured, a row of newly built houses in central Scotland 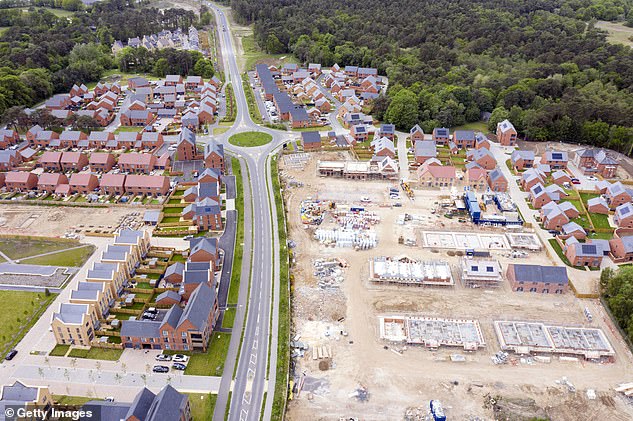 Local councillors will be stripped of power to decide on individual developments in an attempt to get the country building. Pictured, an unfinished housing estate in Bordon, Hampshire

Local councils will decide how to designate all the land in their area. All planning applications will be registered online via an interactive map, intended to help local residents participate in decision making.

However, there are concerns that those living in ‘growth’ areas could be confronted with huge new developments they will get little say over.

Planning shake-up to get homes built

As part of the overhaul all councils will be given two-and-a-half years to draw up plans for the building of more homes or will face sanctions that are yet to be decided.

In what is likely to be a particularly controversial move, there will be a ‘standard requirement’ for local authorities to provide land for new homes.

Central government will decide how to ‘distribute’ the 300,000 a year national housebuilding target.

The Town and Country Planning Association (TCPA) condemned it as disruptive and rushed, saying there are currently up to 1million unbuilt permissions.

Alan Jones, president of the Royal Institute of British Architects (RIBA) described the proposals as ‘shameful’, adding ‘there’s every chance they could also lead to the development of the next generation of slum housing.’

The Government insisted that there would be no lowering of building standards as a result.

Mr Jenrick also said the changes would provide a ‘major boost for small building companies across the country’ by making it easier for them to navigate through the planning process.

Thirty years ago small builders were responsible for 40 per cent of new build homes compared with 12 per cent today.

Mr Jenrick will also replace the community infrastructure levy used by councils to secure money from developers to pay for amenities such a new roads with a standard national levy.

But campaigners voiced concerns about how much say residents would have about developments.

Tom Fyans of the Campaign to Protect Rural England said: ‘The key acid test for the planning reforms is community involvement and it’s still not clear how this will work under a zoning system.

‘We also need robust legal guarantees that the public are consulted regarding new development.’

Nikki Williams of The Wildlife Trusts said: ‘It’s critical that government weaves nature into the heart of every housing development. Proposals for ‘tree-lined streets’ are nothing like enough.’

Lockdown turns sea tropical because of less pollution and activity

We blew £50k on just ONE holiday! Jaw-dropping excess will have you choking on...

Scientists test substance found buried with warrior and his sword in...