Nowadays we have a constant stream of TikTok videos, memes, gifs and websites to keep us entertained, but in the earlier era of the internet people had to rely on much more simple pleasures that are likely to leave today’s tech-savvy youngsters baffled.

One such relic of the dial-up age in Chicken On A Raft, which was a webpage featuring a static image of a bird on a raft with a sea shanty playing on loop in the background, and it’s just been voted among the top 10 outdated websites the internet has to offer.

WebEden has surveyed  2,000 members of the public aged 35 and older to find out their favourite sites that best represent the early days of the internet.

The Space Jam film promotional website takes the top spot on the list compiled by the website-building service, with its retro font choices, clunky layout and static graphics.

Other popular nostalgic sites from the past 30 years that are still live on the internet today include a gif of a dancing baby, and a basic webpage where your could carry out acts of violence against Barney the dinosaur.

Topping the list is the website originally promoting the Space Jam movie,  which has remained unchanged since 1996

Starring Michael Jordan alongside Bugs Bunny, the Space Jam movie is full of nostalgia, with the website that originally promoted it remaining unchanged since 1996.

It’s a true trip down memory lane right into the heart of the 1990s and the site speed is still very impressive.

The site still has access to ‘Jam Central’ a button which gives users access to the film’s production notes, information about the filmmakers, and a Quicktime version of the theatrical trailer.

Pray Before the Head of ‘Bob’ 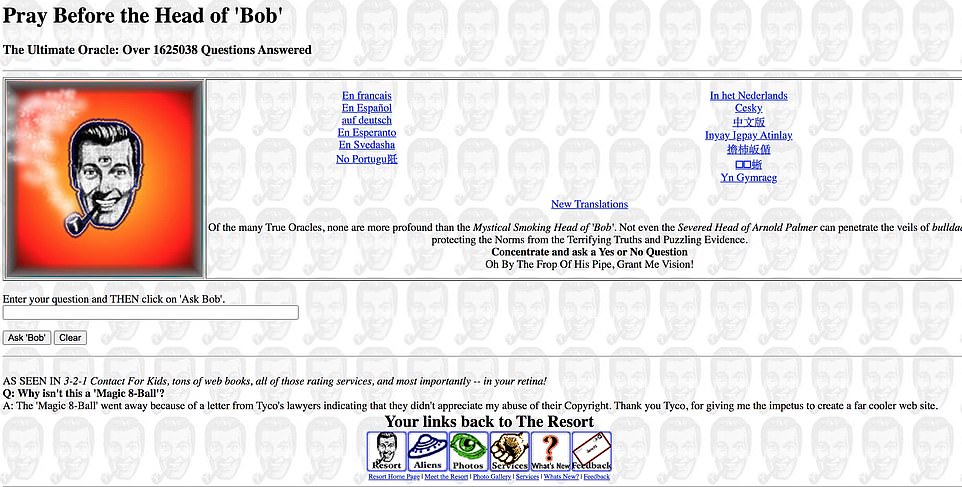 Pray Before the Head of ‘Bob’ is a website intended more as a crystal ball than a search engine.

Bob was one of the first internet chat-bots and claims to have answered over 1,625,000 questions in his 26 years.

Any user is free to type any question in a search bar to be answered by Bob, and the website translates to 13 languages.

The website reads: ‘Of the many True Oracles, none are more profound than the Mystical Smoking Head of Bob.

‘Not even the Severed Head of Arnold Palmer can penetrate the veils of bulldada protecting the Norms from the Terrifying Truths and Puzzling Evidence.’

Twenty-three years after a cult of Californian ufologists committed mass suicide, their website still remains live on the internet

Heaven’s Gate was an American UFO religious group based near San Diego, California, it was founded in 1974 and led by Marshall Applewhite.

Twenty-three years after the cult of Californian ufologists committed mass suicide to coincide with the appearance of the Hale-Bopp comet, their official website is still active, complete with details on how to advance beyond human.

Just before the mass suicide, the group’s website was updated with the message which can still be found on the group’s page, reading: ‘Hale–Bopp brings closure to Heaven’s Gate.

‘Our 22 years of classroom here on planet Earth is finally coming to conclusion—’graduation’ from the Human Evolutionary Level. We are happily prepared to leave ‘this world’ and go with Ti’s crew.’

Chicken on a Raft 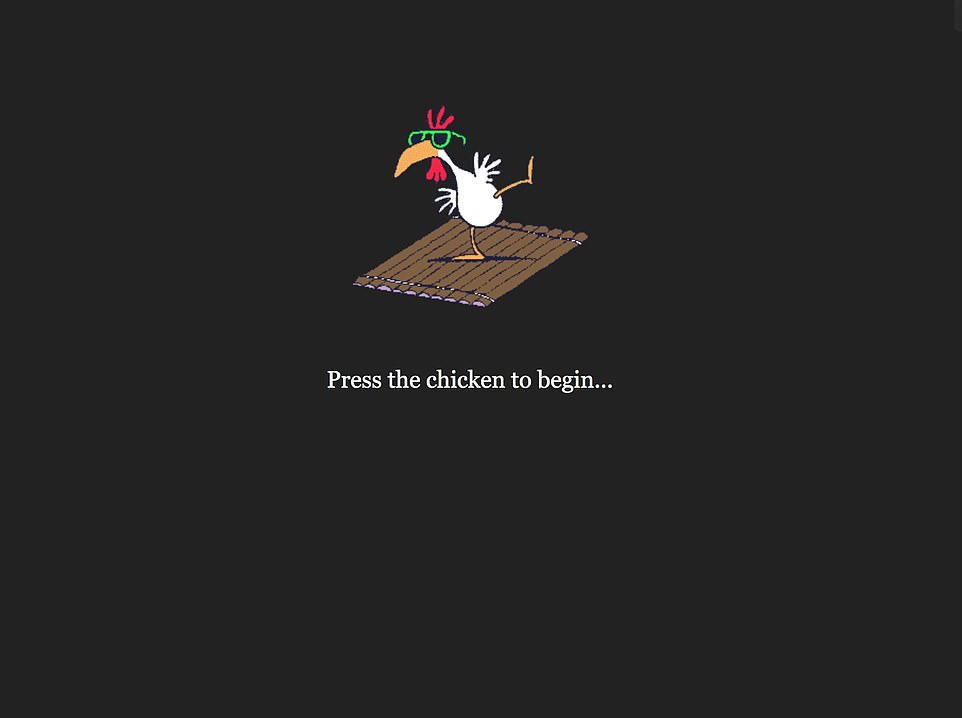 While hours can quickly disappear scrolling through social media, Chicken on a Raft  hooked users in with its simple premise.

The site is also complete with a timer to see how long you can stand the tune, and had friends competing to clock up the longest listening time.

The Barney Fun Page was originally created 26 years ago and is still live despite only partially working.

The Barney Fun Page allowed users to choose a variety of weapons to attack a 2D drawing of the iconic character from children’s television.

The dubious website allowed users to choose whether they wanted to use a knife, gun, axe, shotgun motorcycle or cannon to end the life of the fictional creature.

TOP 5 MOST POPULAR WEBSITES PEOPLE VISITED IN THE 1990s 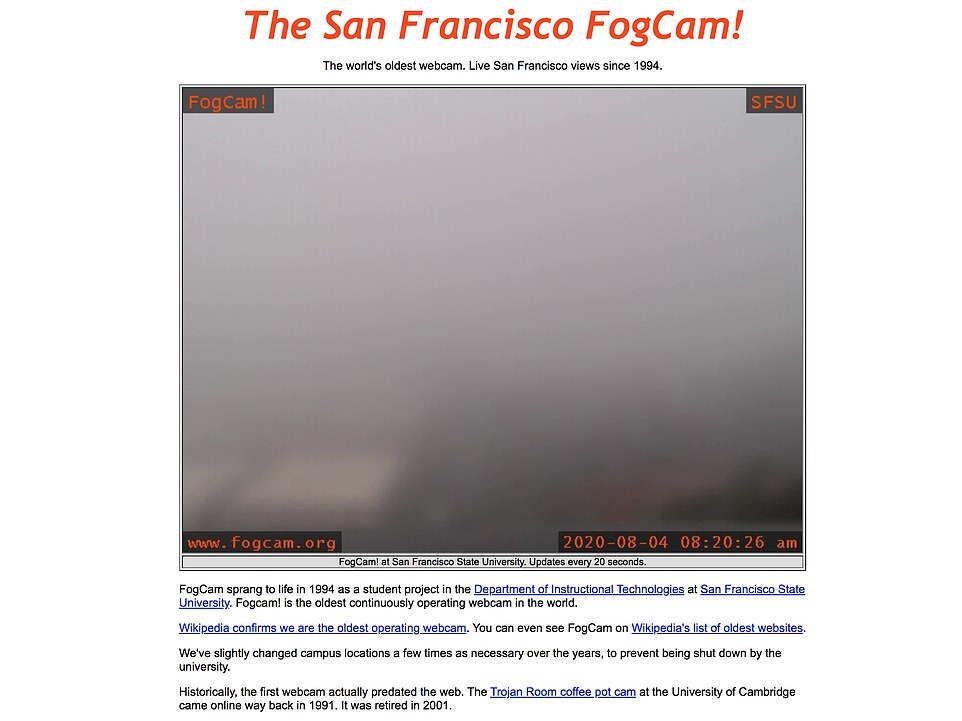 FogCam is world’s oldest webcam and has been live streaming 24/7 above a courtyard since 1994.

The camera sprang to life as a student project in the Department of Instructional Technologies at San Francisco State University.

The FogCam slightly changed campus locations a few times as necessary over the years, to prevent being shut down by the university. 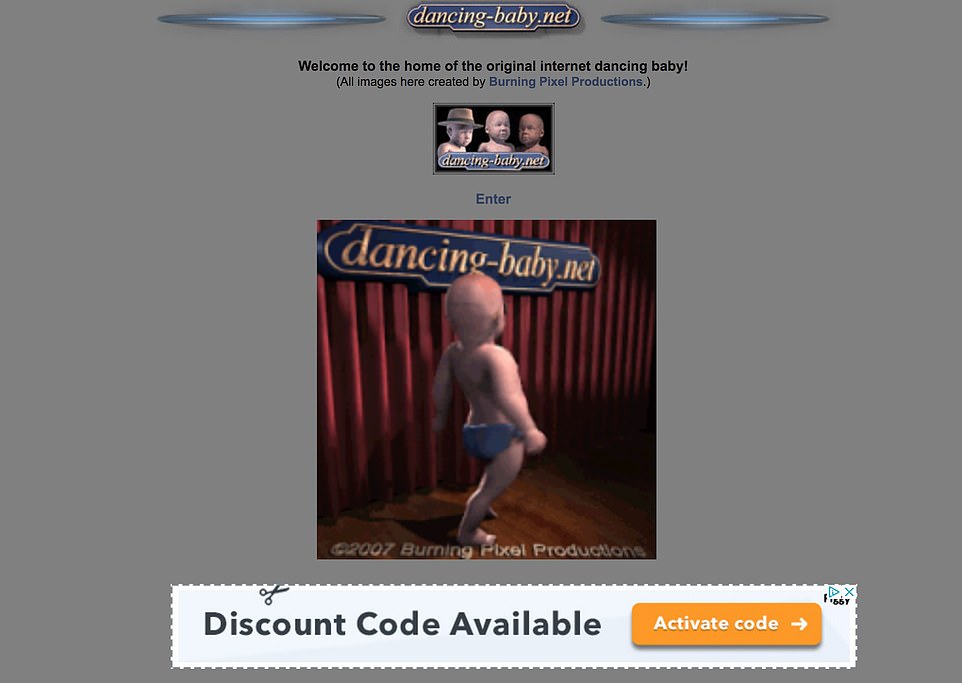 Before memes and GIFs were being shared in group chats, a CGI dancing baby was the funniest thing to share on the internet and he can still be seen dancing away today.

Dancing Baby, also called ‘Baby Cha-Cha’ or ‘the Oogachacka Baby’, a reference to the song playing in the background of the video, is a 3D-rendered animation of a baby dancing.

It quickly became a media phenomenon and one of the first viral videos early in the second half of the 1990s.

It turns out that even early internet users weren’t fond of Microsoft’s Internet Explorer.

One user even took it so far as to create a website called Internet Explorer is EVIL explaining how the browser is evil along with 260 ways to ‘Kill Bill’ (Gates). 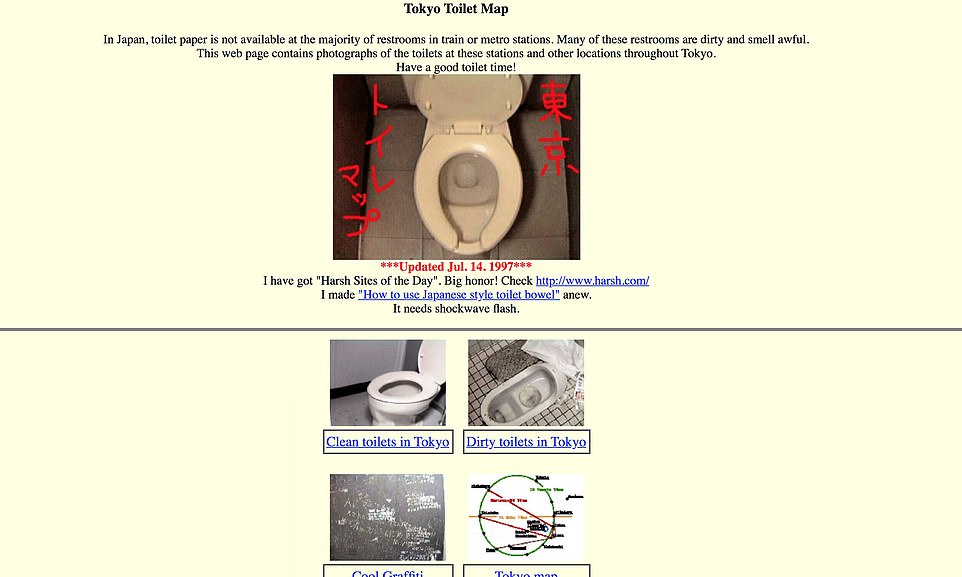 Before being able to search on Google for locations and reviews of the closest restrooms, Tokyo residents could consult this website to find out which toilets to avoid.

The site reads: ‘In Japan, toilet paper is not available at the majority of restrooms in train or metro stations. Many of these restrooms are dirty and smell awful.

‘This web page contains photographs of the toilets at these stations and other locations throughout Tokyo.

‘Have a good toilet time!’ 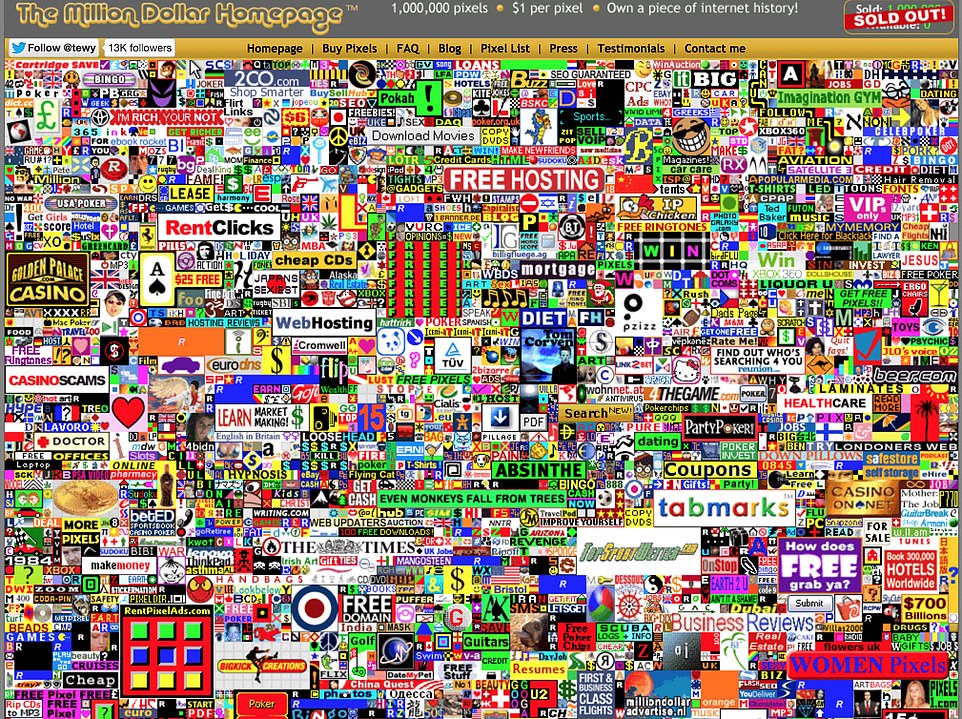 The Million Dollar Homepage was the youngest website to make the list and was launched in 2005 after being set up by Alex Tew, a student aiming to raise money for his university education.

Charging $1 per pixel, Alex soon made $1 million and the site stands today as a historical monument of the power of internet advertising.

The homepage featured a web banner with the site’s name and a pixel counter displaying the number of pixels sold.

It then included a navigation bar containing nine small links to the site’s internal web pages, and an empty square grid of 1,000,000 pixels divided into 10,000 100-pixel blocks.

Tew promised each customer that the site would remain online for at least five years – that is, until at least August 2010 – and it remains live today.

Murder probe is launched after man, 48, is stabbed to death at home in north London

Japan’s Fugaku is crowned fastest supercomputer with 2.8 times more power than its predecessor

Boy George and Kelly Rowland clash on The Voice Australia

Queen Letizia of Spain stuns in blue as she joins King Felipe at the...

Doctors are up to 37% less likely to screen you for cancer later in...

Truckie who killed four cops after they pulled over Richard Pusey...