UberEats and Deliveroo will start bringing groceries and even medication to customers’ doors in Victoria, amid fears critical supply chains are being cut off.

Melbourne and the Mitchell Shire entered Stage 4 lockdown coronavirus restrictions on August 2, with an 8pm curfew and strict restrictions on businesses that can operate.

On Tuesday, the state recorded another 19 deaths, its highest total for the second consecutive day, while people remain confined to their local area and told to avoid busy supermarkets.

Deliveroo has partnered with convenience store giants BP and EzyMart to deliver groceries and basic medical supplies such as panadol to customers.

Those isolating after being diagnosed with COVID-19 or awaiting test results are not allowed out of their homes, even to buy the most necessary items.

Food delivery services UberEats and Deliveroo are now bringing medication and groceries to customers’ doors in Victoria (pictured, a delivery worker on July 6)

He said while there have been new additions – such as BP Couchfoods and EzyMart – to bring items such as groceries and medication – delivering food is the core of the business.

‘EzyMart recently joined Deliveroo and is in the process of bringing a large number of stores onto the platform in response to consumer demand for pantry essentials, personal care items, fridge essentials and convenience snacks,’ Mr McManus said.

Meanwhile UberEats has partnered with Caltex to deliver items such as Advil, Zyrtec and Codral in under 30 minutes.

Lucas Groeneveld, Uber’s Head of Markets for Australia and New Zealand, said the delivery service was committed to bringing Australians what they need and that they could operate after the 8pm curfew. 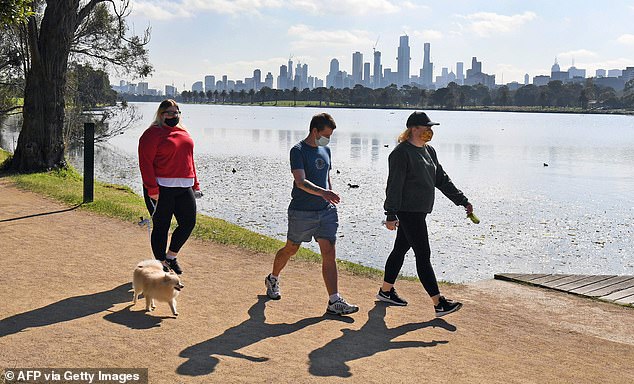 People living in Melbourne and the Mitchell Shire are only allowed to leave their home for four reasons – including exercise – and have a curfew of 8pm (pictured, walkers on Monday)

‘Whether it’s parents needing Panadol late at night, providing a service for those less mobile, or making it easier for people to self-isolate without forgoing access to important health items, this new offering will make life easier for hundreds of thousands of Australians,’ he said.

On Sunday officials announced that Australia Post posties and warehouse workers would be included in the exempted workers category, after fears their delivery services would be severely hampered.

Initially a third of the workforce was expected to be stood down but that has now been reduced to just ten per cent of staff.

‘We have worked with the Victorian Government to ensure our post offices remain open and that our deliveries – our posties and drivers across Victoria – remain on the road,’ an Australia Post spokesperson told Daily Mail Australia. 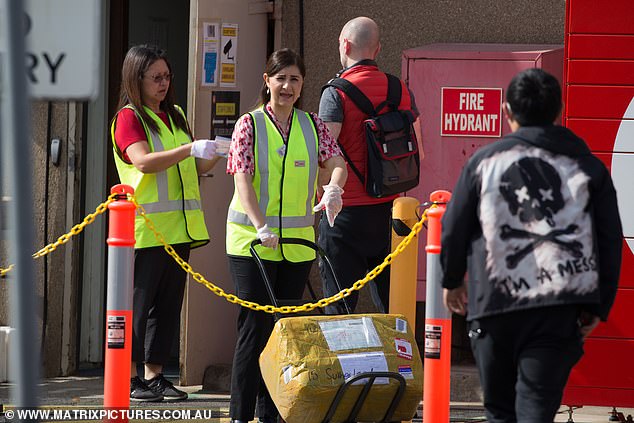 ‘For our delivery and parcel facilities in metropolitan Melbourne only, we will have a ten per cent daily workforce reduction, coupled with split shifts in a COVID-safe environment, ensuring cleaning between shifts and a COVID Safe Plan.’

Under the lockdown, business are divided into three categories – essential ones that operate as normal, ones that must slash shifts and output, and those that must close – sparking panic-buying and concerns of a national food shortage.

Long lines and full trolleys were seen outside supermarkets as early as 7am on August 4 following the announcement – even though they would stay open under Stage 4. 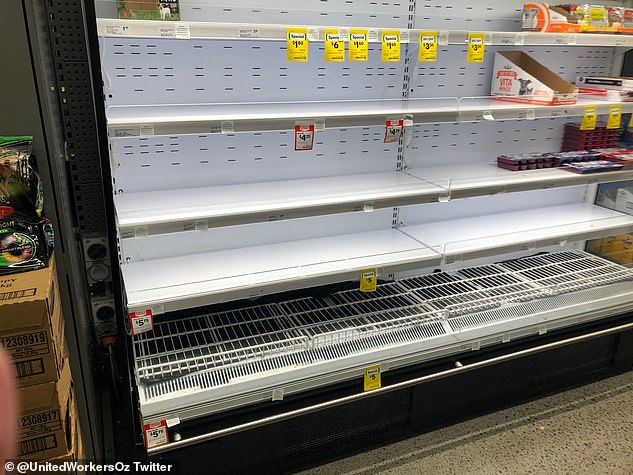 The move has forced supermarkets such as Woolworths to put two-item restrictions on more than 50 products as shoppers as shoppers started to clean out shelves across Victoria yet again.

Victorian distribution centres have been forced to reduce their workforce to two-thirds of normal production during the six-week lockdown.

Meanwhile abattoirs have had their staff cut by a third to increase social distancing.

The Supermarkets Taskforce, an alliance of major supermarkets focused on preventing supply shortages during the coronavirus crisis, has also argued the unprecedented restrictions will disrupt the grocery supply chain across Australia.

The body expressed concern that people would make multiple trips in order to complete their grocery shop. 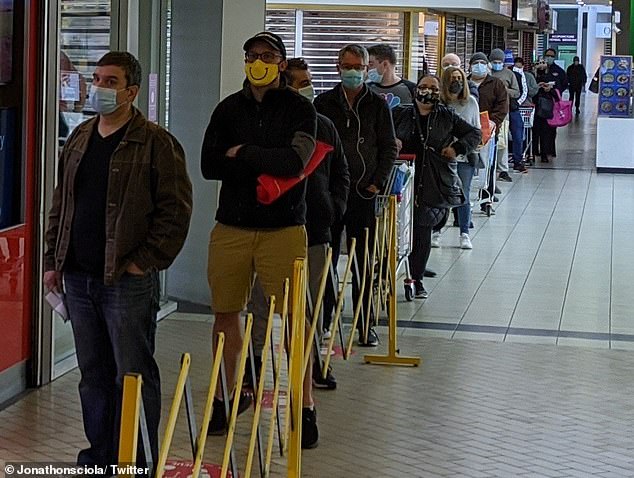 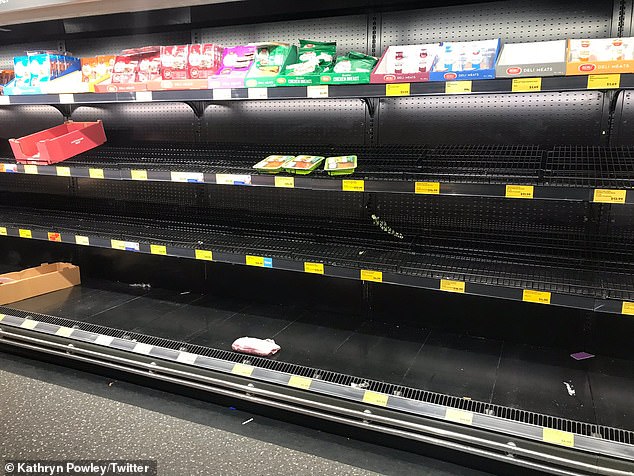 ‘We have to urgently fix supply chain issues at distribution centres,’ she told the Sydney Morning Herald.

‘These restrictions must be lifted today because they do not recognise that supply chains operate nationwide.’

‘We have to urgently fix supply chain issues at distribution centres. These restrictions must be lifted today because they do not recognise that supply chains operate nationwide.’

Victoria coronavirus lockdown who stopped to eat McDonald’s after work is fined $1,652

Premier League clubs fear coronavirus outbreaks after being told they can...

The Bachelor’s Abbie Chatfield is forced to pull an episode of...

Victoria coronavirus lockdown who stopped to eat McDonald’s after work is...

Brazil records its biggest ever jump in coronavirus cases and 1,282...