BBC presenter Clemency Burton-Hill has revealed she suffered a serious brain haemorrhage after collapsing at work.

The presenter of Radio 3’s Classical Fix had emergency brain surgery earlier this year after she passed out during a meeting in New York, where she is creative director of classical station WQXR.

She suffered a haemorrhage caused by a previously undiagnosed arteriovenous malformation (AVM), an uncommon and abnormal cluster of blood vessels in her brain.

The 39-year-old, who was unconscious for 17 days, told how music was played to her 24 hours a day through a small speaker next to her bed and said that, just before she regained consciousness, she seemed to make a choice of whether to give up or live.

Ms Burton-Hill, who writes movingly about her terrifying brush with death in today’s You magazine, told BBC Arts Online: ‘It was literally: “I can do this, I’m going to get through this.” Music is the opposite of despair.’

BBC presenter Clemency Burton-Hill, pictured, has opened up about her experience of suffering a brain hemmorage and spending 17 days unconscious. She is now relearning how to walk

She also revealed how she has begun to relearn how to speak and walk, and is undergoing physical therapy to strengthen the right side of her body, which was affected by the bleed.

As part of her recovery, she has even managed to play the violin with the help of her friend, the violinist Nicola Benedetti, using her left hand on the instrument’s strings while Ms Benedetti bows.

She said: ‘It’s a cliched idea that music is beyond language, but from what I’ve experienced in my own brain, I truly know that now. 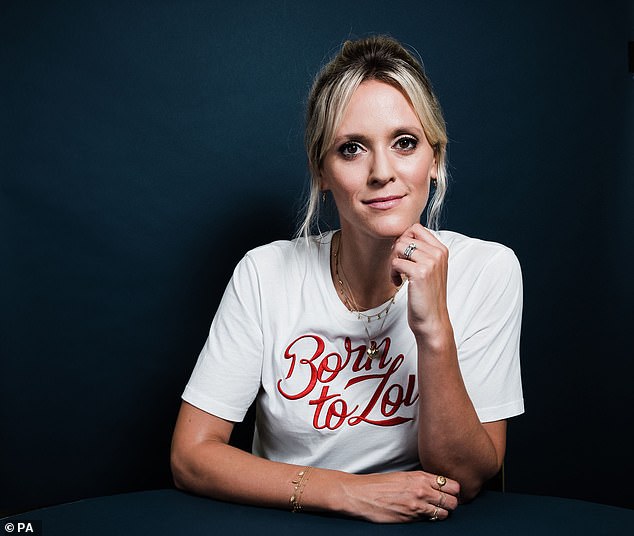 Clemency Burton-Hill revealed how she has begun to relearn how to speak and walk, and is undergoing physical therapy to strengthen the right side of her body

‘I really believe music is a part of my recovery because it uses both sides of the brain. It’s as though it trains your brain to be ambidextrous. Sometimes it is the thing that gives me solace. And sometimes it’s the thing that helps me to get up and fight.’

As well as her programme on Radio 3, Ms Burton-Hill, who attended Cambridge University and the Royal College of Music, is also a presenter of The Culture Show, BBC Young Musician, The Review Show and the BBC Proms.

She has also appeared as an actress in several TV shows including Midsomer Murders.

She has two sons with her diplomat husband, James Roscoe.

I tried to speak, then the world went dark – in You magazine

‘I tried to speak, then the world went dark’

Only six months ago, a terrifying bleed on the brain left Clemency Burton-Hill unable to see, talk or walk – yet she has defied medical expectation to relearn all three. She tells how her brush with death made her determined to live 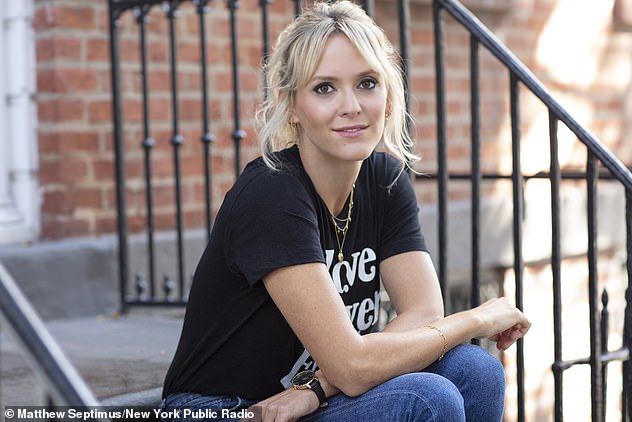 A little over six months ago, on 20 January, my life changed in an instant. In the US, where I live, it was a public holiday: Martin Luther King Day. I didn’t go to my office at New York Public Radio, where I am creative director at classical music station WQXR, but instead I headed to a work meeting in Brooklyn. I was due to discuss a programme of musical collaborations in a new venue and I was brimming with ideas.

My husband James took our two sons, aged five and one, to the Liberty science museum. We planned to meet that afternoon. I kissed the boys and remember waiting for the lift, saying goodbye. We parted ways.

It was a beautiful, freezing winter’s morning. Once there, I was shown around. Excited about our proposed concert and interview series, I took photos and texted them to my producer. My meeting was just wrapping up when I tried to say something. My speech started slurring. I was instantly aware something was terribly wrong. My mouth was not cooperating. I tried to speak again – the words were clear in my brain but came out as gobbledygook. I was terrified. Then suddenly the world went dark.

I came round in a hospital bed 17 days later, half of my skull missing, and I had no idea where I was or what had happened. At first I thought I was dreaming but, when I tried to speak, I still couldn’t produce the words. It felt like a living nightmare. I later learned what happened.

I was taken to the Brooklyn Hospital Centre, where an emergency scan revealed a bleed in my left frontal lobe, and transferred to Mount Sinai West hospital. I was having a massive brain haemorrhage caused by an arteriovenous malformation (AVM) – a tangle of abnormal blood vessels connecting arteries and veins. An AVM, which is rare, is something you’re born with. Most people are oblivious to the condition – I certainly was. And a bleed is even rarer: fewer than two to four per cent haemorrhage. In most cases, an AVM is only discovered through a severe rupture that can often be fatal.

At Mount Sinai West the swift action of a heroic medical team, led by expert neurosurgeon Dr Christopher Kellner, saved my life. But my family and friends were told to prepare for the possibility that I would be unable to understand, speak, see and walk again.

After a few weeks, I was transferred to NYU Langone’s Rusk rehabilitation hospital, where another outstanding team, led by Dr Heidi Fusco, looked after me. I began the daunting task of physical, speech and occupational therapy. Although I had partially regained my sight and comprehension, I was still wheelchair-bound and couldn’t move the right side of my body. Nor could I speak. I had spent almost two decades as a broadcaster, author and journalist. Words have always been my livelihood. But more than this, they have been my friends, my refuge, my salvation. Now, although I understood everything, the problem was how to get the words out. Inside, I was screaming. 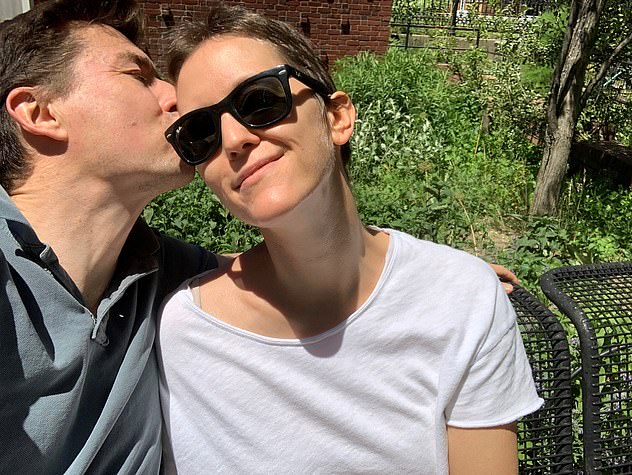 With husband James Roscoe in their local park in June

Early in March, back in Mount Sinai West, I had a cranioplasty operation to replace the half of my skull that had been removed to accommodate the brain swelling. My ever supportive husband was there. My devoted mum came from London, a third visit in six weeks. Friends crisscrossed the Atlantic – there’s nothing like major brain surgery to show how magnificent your friends are. I returned, via ambulance, to Rusk. The Covid-19 crisis was escalating. The hospital went into lockdown on 18 March, the day after my 39th birthday.

No more visitors. I also contracted coronavirus. I was lucky to have a relatively mild case, but the after-effects lasted at least 12 weeks. All patients were confined to their rooms. Therapy ceased except for basic sessions, which were delivered in hazmat suits. A first principle of speech therapy is that the patient has to copy the shapes the therapist makes with their lips and tongue. Tricky, if you’re both wearing masks.

That said, on 10 April, thanks to remarkable staff, I walked out of hospital unaided. It was Good Friday. Outside, on East 17th Street, I remember hearing a taxi honk – the most miraculous thing I’d ever heard. It was an incredible moment, like starting again.

I am now trying hard to learn the true meaning of patience. I fail every day but I keep trying. I can walk (slowly) in the park or along the Hudson river. I can play (simple) Lego with my kids. I can tell them I love them (constantly). I can read (again, slowly). I can see (apart from a tiny spot in my right peripheral vision). I can partly move my right side again. My old violin teacher Rodney has been showing me how to hold my bow again: I have almost no sensation, yet I can feel it, like a phantom muscle memory. Meanwhile, my friend Nicky is helping me play by bowing for me while I do the left hand: the first time we tried, I wept like a baby. (I have always believed in the life-altering power of music; now I know.) I am as curious and thirsty for knowledge as ever. My brain is buzzing. I am altogether and entirely me, albeit with a shaved head which I hate, even if my friends insist it’s ‘chic’. (It’s not.) Most miraculous of all, I’m learning to talk again. Hair grows back. Sentences are formed. Progress is real. 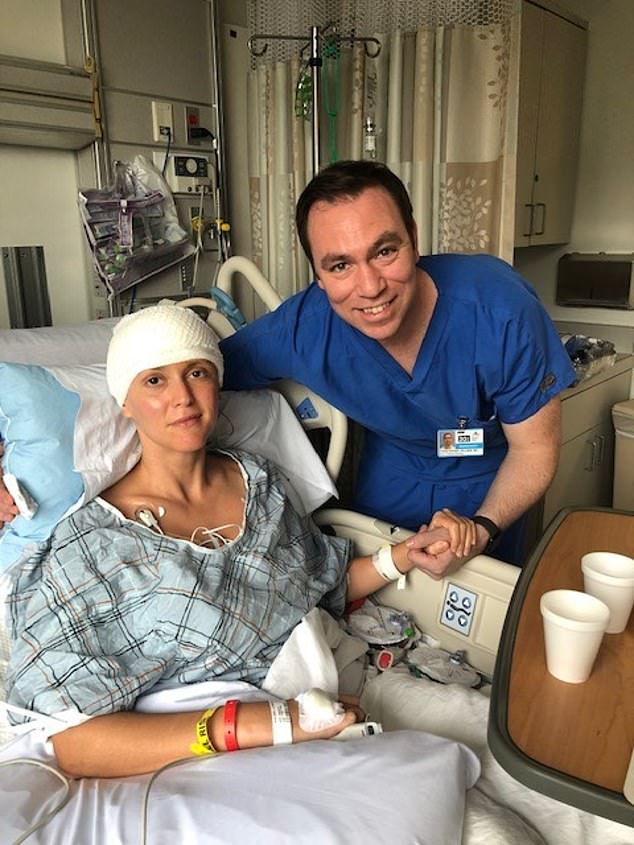 With neurosurgeon Dr Kellner in march after surgery

I’m aware that I’ve been so, so lucky. The AVM is still there – Dr Kellner and his team are treating it with radiotherapy – and there is a long road ahead. But it is a salutary reminder to live every day to its fullest. Life is a miracle. I am so grateful that, because of the exceptional medical care I was privileged to have access to, I survived.

At my darkest points the despair felt acute, unbearable. Being unable to speak felt like a kind of solitary confinement. Even though I was surrounded by friends and family, I felt entirely alone. Lacking the forbearance to tell myself ‘this too shall pass’, I simply repeated ‘I choose life’, over and over. It became a mantra. (What can I say? I belong to the Trainspotting generation.)

And I do choose life. Every day. I choose life in all its complexity; aware of its beauty, its pain, its hope, its fragility, its love. Life, I believe, is a gift of unimaginable proportions. I don’t know what the future holds – for me or the world – but I have faith in the extraordinary power of humanity.

Kath and Kim star Peter Rowsthorn spills the behind the scenes secrets of the...

Number of people testing positive for Covid-19 in England increases by 43% in one...

Demi Rose lounges around in an oversized hoodie as she makes...