By James Gant For Mailonline

A police force has warned over drugs-laced ‘sweets’ that are infused with cannabis and ecstasy and being sold online.

North Yorkshire Police said parents and carers should be ‘aware’ of a rise in youths found with ‘edibles’ disguised as Nerds candy.

Youths are buying ones with up to 6000mg of cannabis off dealers online for as little as £42, according to one investigation.

They can be bought in different colours and drug potencies and are easy to mistake for normal Nerd Rope.

North Yorkshire PC Lauren Green told the Sun: ‘We want to make parents and carers aware that we have seen a rise in young people being in possession of drug-infused sweets known as ‘edibles’.

‘They can look very similar to well-known sweets such as Haribo, Smarties and chocolate bars. Edibles can be laced with illegal drugs such as cannabis and MDMA.

‘Unregulated sweets like these are dangerous as we don’t know what levels of drugs they contain.’

The shocking discovery comes after the police force urged parents to be vigilant after a huge drugs and weapons bust on Friday.

The move was part of Operation Needle, which is looking to smash dealers in the upmarket town half an hour north of Leeds. 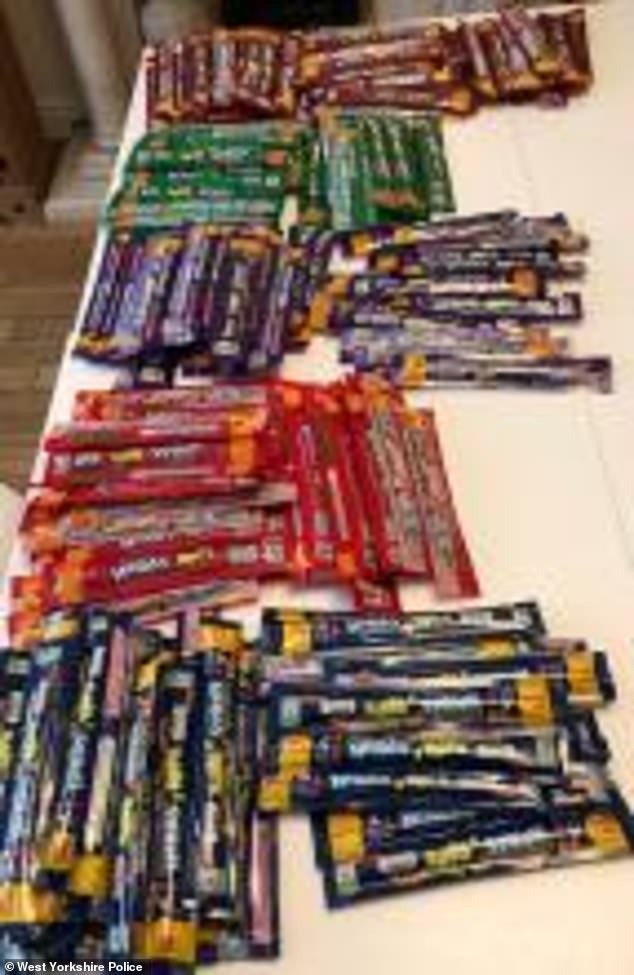 The 24-year-old is alleged to have supplied class A drugs and cannabis as well as laundered money.

A North Yorkshire Police spokesman said: ‘Police seized what they suspect as cannabis infused Nerd sweets and are warning parents to be alert to the possibility that young people in the area may have bought them.’

Last month officers in Bradford confiscated a huge supply of Nerds sweets, which were also stuffed with cannabis.

And in July a teenager girl had to be taken to hospital in Castleford, near Wakefield, after she ate Nerds Rope infused with amphetamine.

Personal trainer dad, 34, is arrested for ‘decapitating his daughter, 13,...

Only THREE of 40 police forces in England fined people for...