A ‘party lad’ thought to be behind Bolton’s coronavirus case spike ‘always had parties and people round’ after returning from his six-week Ibiza holiday, neighbours say.

Construction worker Layton Migas, 23, spent six weeks sunning himself on the Ibiza island Es Vedra before returning to his home in Bolton on August 20.

His neighbours have today shed light on Mr Migas’ partying ways, adding ‘he was hardly discreet’ about defying quarantine.

Travellers returning from Spain, which is not on the UK’s approved travel corridor list, are required to self-quarantine for 14 days in an attempt to prevent the spread of the virus.

Layton Migas, 23, spent six weeks sunning himself on the Balearic island of Ibiza before returning to his home in Bolton on 20 August

A neighbour said: ‘When he came home from Ibiza, he was hardly discreet. He was always going out in his van.

‘If I’d have spent weeks in Ibiza, then posted all over social media, I would have stayed in and kept my head down.

‘He was always having parties and people were coming in and out his house all the time when he was supposed to be in quarantine.

‘He is a young lad but should have known better.’

Ibiza was excluded from England’s travel corridor list on July 26 and when Mr Migas flew back to the UK he should have quarantined at home for 14 days.

Instead, neighbours say Mr Migas invited friends round and constantly left home in his van. 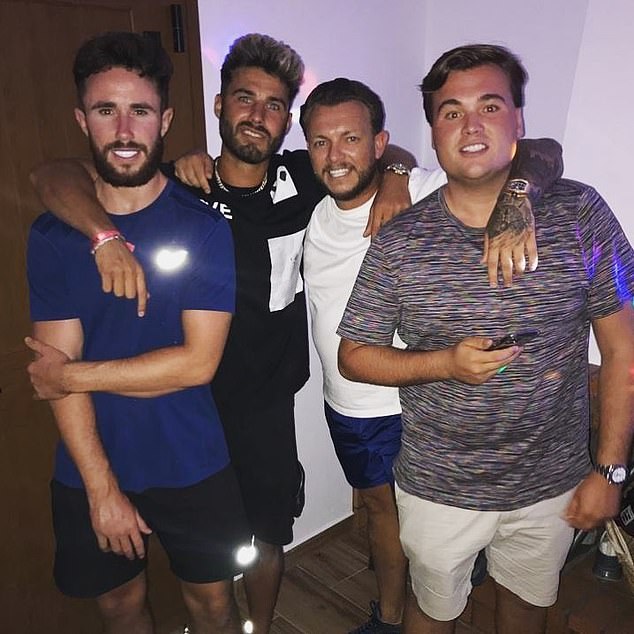 Migas is pictured with his friends while on holiday in Ibiza in August this year. Bolton MP Chris Green confirmed that one infected holidaymaker is thought to be behind the rise in infections in Bolton

One said: ‘He is a real party lad and is always on holiday and going to places like New York. As soon the travel ban was lifted he was away.

‘He wasn’t expecting to be out for so long but was having such a good time, he decided to say.

‘He decided to stay out in Ibiza instead of coming home when the travel corridor was closing so it’s his own fault.

Greater Manchester Police have fined the 23-year-old £1,000 for the repeated breaches. 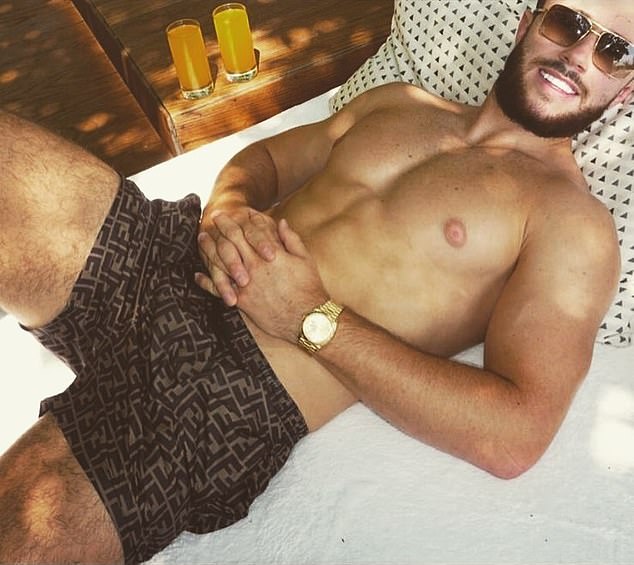 Migas is pictured while on holiday in Ibiza in August this year. Migas said he feels he has been ‘scrutinised’ for being a young person

Bolton West MP Chris Green confirmed that he had been told by health authorities that one infected holidaymaker is thought to be behind the rise in infections in the Lancashire town.

Mr Green told the Sun: ‘The only suggestion I’ve heard so far to what’s happened in Bolton is that someone who had been on holiday in Spain, came back, didn’t go into quarantine.

‘He had coronavirus, went on a pub crawl. That’s so far the only explanation of a contributory factor in Bolton.’

Mr Green said he doesn’t think the breaches are the only factor behind the staggering rise in cases in Bolton. He expressed concern over the unknown reason behind the increasing rate of transmission.

Migas himself confirmed that he had been fined by Greater Manchester Police and said he feels he has been ‘scrutinised’ for being young.

‘I’d say I have definitely been scrutinised for being a young person,’ he told the Sun. 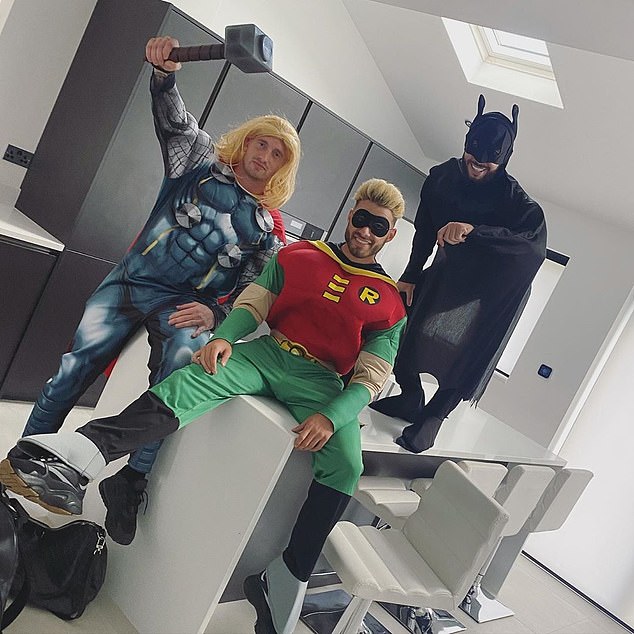 Migas is pictured with his friends while on holiday in Ibiza in August this year. The 23-year-old went to the Spanish island for his summer holidays, returning on August 20 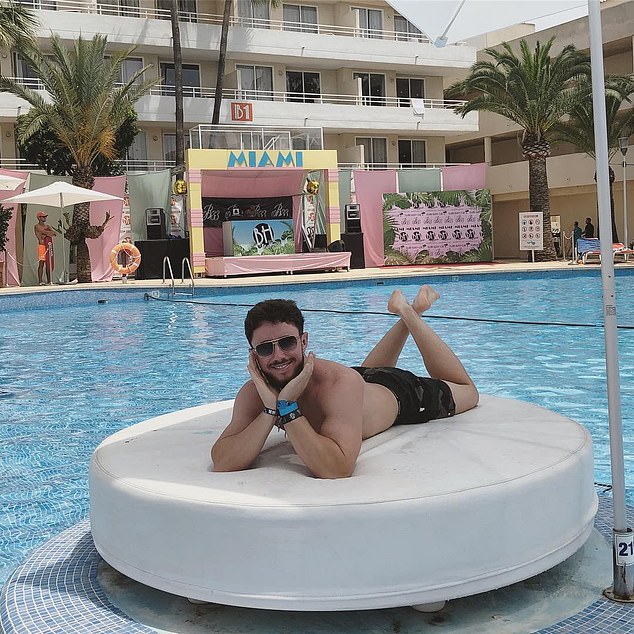 Migas, pictured on holiday, said police hit him with a £1,000 fine after tracking him down

‘They wouldn’t have known. It’s only the neighbours that have told them.

‘There’s loads of people I know who didn’t quarantine.

‘What I actually got done for was that I was partying but I was actually in my house with the people I had been on holiday with.’

Migas claims that he was in his house with two other people, who he’d been on holiday with, when police knocked on the door, accusing him of not quarantining himself.

Officers attended the property at 9am and 1pm, he said, adding that he was asleep at the time so didn’t answer.

Despite not having a test, the 23-year-old asserted that he never had the virus because he was not experiencing any symptoms.

Thirty per cent of people infected with the disease are asymptomatic.

‘I’ve not had any symptoms,’ he said. ‘I did actually want to go for a test but there wasn’t any in Bolton and the next nearest was Blackburn. It’s a long way to drive if you know you’re not ill.’

The jet setter has travelled to Dubai, New York, Mallorca and Thailand in recent years.

Chief Inspector Nicola Williams, of GMP, told the Sun: ‘The actions of this man were completely irresponsible, not only was he leaving the house while he should have been self-isolating, he also held a house party, which breached further regulations and subsequently put others at risk.’

She said the £1,000 fine ‘should serve as a stark warning’ to other people who feel they can ignore Covid-19 regulations and get away with it. 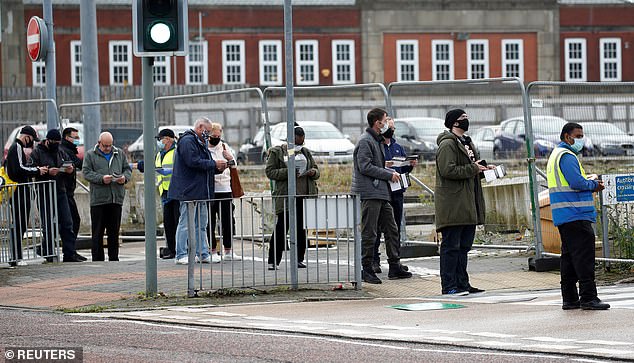 A couple in nearby Chorley, Lancs, were also hit with a £1,000 fine after returning from the Canary Islands and failing to isolate.

Last week, Bolton was placed under tighter Covid-19 restrictions as the infection rate in the area became the highest in England with hundreds of thousands of people banned from mixing.

Bolton Council asked people in the town to avoid mixing with other households and to only use public transport for essential purposes.

It comes as the town’s infection rate recently increased to 99 cases per 100,000 people per week, the highest in England, the council said.

Pianist, 80, gets emotional as he plays piano with new bionic gloves after years of disibility

Can you crack the corona conundrums? These picture puzzles reveal 21 familiar lockdown activities

Pianist, 80, gets emotional as he plays piano with new bionic...

Karl Stefanovic asks Jacinda Ardern if she went ‘too hard’ with...

Mark VE Day 75 by putting a Tommy in the Window...