A Chinese virologist who alleges the coronavirus was cooked up in a military lab has published a report which she claims backs up her theory.

Li-Meng Yan, who alleges to be a former researcher at the Hong Kong School of Public Health, says the virus was built by merging the genetic material of two bat coronaviruses.

She claims its spike protein – a structure on the surface of the virus which it uses to bind with cells – was edited to make it easier for the virus to latch on to human cells.

But scientists have slammed her report — which she promised she would release in an interview last week — as ‘unsubstantiated’ and said it ‘cannot be given any credibility’.

Research papers have already determined the origin of the virus as bats, leading to top experts dismissing suggestions the virus was created by humans as having ‘zero evidence’.

SARS-CoV-2 — the scientific name of the pathogen — is the seventh coronavirus known to infect humans and jumped to people after an earlier version of it mutated. The previous virus is thought to be one that infected bats and then reached humans via another animal.

But it has gained widespread public attention, being viewed more than 150,000 times since it was posted yesterday on the website Zenodo, which is operated by the European Organisation for Nuclear Research.

Ms Yan posted the report online alleging that the coronavirus was designed. But scientists have previously dismissed her claims and said there is ‘exactly zero evidence’ 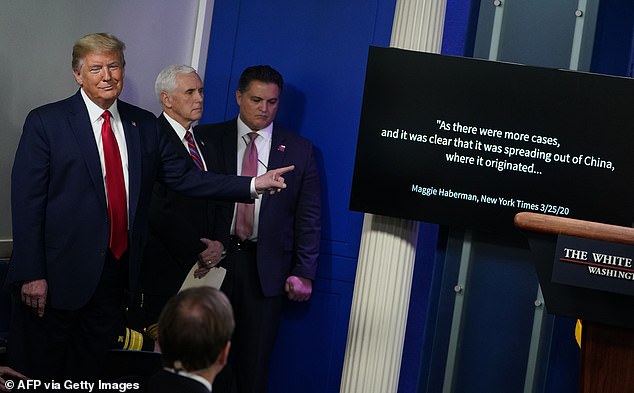 Ms Yan writes that her research discounts the theory that coronavirus evolved in the wild and was then transferred to humans, claiming it ‘lacks substantial support’.

‘SARS-CoV-2 shows biological characteristics that are inconsistent with a naturally occurring virus,’ she wrote.

‘The evidence shows that [the virus] should be a laboratory product created by using bat coronaviruses ZC45 and/or ZXC21 as a template and/or backbone.’

She alleges the virus ‘should’ have been built using stores of these bat viruses, of which she claims samples are kept in Hong Kong and China.

President Donald Trump said he has seen evidence that coronavirus started in the Wuhan virology laboratory, as he warned he could impose tariffs of $1 trillion on China in retribution for the pandemic.

The president made the explosive charge that the coronavirus that has caused millions of infections and wreaked havoc on the global economy may have been created in the Chinese lab during his coronavirus press briefing Thursday.

He also suggested the federal government is exploring ways to punish China for triggering the outbreak by imposing tariffs but he stopped short of saying he would refuse to pay back US debts.

‘Yes I have. Yes I have,’ Trump said when asked if he had seen proof the virus originated in the Wuhan Institute of Technology.

The lab is located near a wet market that has been identified as the likely epicenter of the outbreak that took place late last year.

However, the president would not divulge what the evidence was that confirmed his suspicions, when asked by a reporter.

Ms Yan also alleges that her work shows the virus could be built in just six months in the report’s abstract, but she does not return to the subject later in the paper.

Dr Andrew Preston, an expert in microbial pathogenesis at the University of Bath, blasted her report as being ‘reminiscent of a conspiracy theory’.

‘The author’s affiliation is the Rule of Law Society and Rule of Law Foundation, New York,’ he said.

‘On their website the vision of this organisation is “to permit the people of China to live under a national system based on the rule of law, independent of the political system of the People’s Republic of China” and its mission is “to expose corruption, obstruction, illegality, brutality, false imprisonment, excessive sentencing, harassment, and inhumanity pervasive in the political, legal, business and financial systems of China”.

‘Given the unsubstantiated claims in the publication, which has not been peer reviewed, the report cannot be viewed with any credibility as it stands.’

Dr Michael Head, a global health expert at the University of Southampton, said the conspiracy theory peddled by the report has been ‘doing the rounds throughout the pandemic’.

‘Ultimately, it could be damaging to public health if reported non-critically without looking at the wider evidence,’ he said.

‘If people are exposed to and then believe conspiracy theories, this will likely have a negative impact on efforts to keep Covid-19 cases low and thus there will be more deaths and illness than there needs to be.

‘The genomics of the virus have been disentangled previously, for example a Nature peer-reviewed paper where they state “Our analyses clearly show that SARS-CoV-2 is not a laboratory constructed or a purposefully manipulated virus”.

‘Other evidence also shows that this type of coronavirus has existed in bats for decades.

‘This new manuscript is not peer reviewed and does not obviously offer any data that overrides previous research.’

Her allegations have not been backed up by any scientific papers or scientists, with reports suggesting the virus was created previously condemned as conspiracy theories.

Writing in the respected journal Nature Medicine in March, scientists from the Scripps Research Institute, University of Edinburgh, and other universities, said that SARS-CoV-2 is the seventh coronavirus known to infect humans.

‘It is improbable that SARS-CoV-2 emerged through laboratory manipulation of a related SARS-CoV-like coronavirus,’ they said.

‘The genetic data irrefutably shows that SARS-CoV-2 is not derived from any previously used virus backbone.’

Why did China build a virus lab in Wuhan? 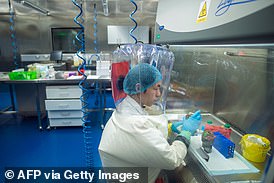 Chinese officials decided to build the Wuhan Institute of Virology after the country was ravaged by an outbreak of SARS in 2002 and 2003.

SARS, another kind of coronavirus, killed 775 people and infected more than 8,000 globally in an epidemic that lasted about eight months.

It took the Chinese 15 years to fully complete the project, which cost a total of 300million yuan (£34million). The French helped design the building.

Its crown jewel is a four-storey lab with the highest biosafety level of P4.

It’s the most advanced laboratory of its type in China.

Construction of the lab was finished in 2015 and it officially opened on January 5, 2018, after passing various safety inspections.

Describing the significance of the P4 lab, China Youth Online billed it as the ‘aircraft carrier of China’s virology’. The state-run newspaper said it ‘is capable of researching the deadliest pathogens’.

One researcher, Zhou Peng, told state news agency Xinhua in 2018: ‘We are proud to say that we are already at the forefront in the field of studying the immunity mechanism of bats, which carry viruses for a long time.

‘Bats carry viruses but are not infected [by them]. [They] provide hope for mankind to study how to fight viruses.’

Dr Kristian Andersen, from the Scripps Research Institute in La Jolla, California, said the genetic material clearly pointed to a natural origin of the virus.

‘There are lots of data and lots of evidence, as well as previous examples of this coming from nature,’ he said. ‘We have exactly zero evidence or data of this having any connection to a lab.’

Dr Angela Rasmussen, an infection and immunity expert at Columbia University, New York, said the site at which the virus binds to human cells has a ‘sub-optimal’ fit, suggesting it was not designed.

‘Furthermore, there are no genetic similarities with other virus backbones used in any of the known (virus engineering systems),’ she said. ‘This suggest that this virus was not engineered.’

Also rubbishing claims the virus was built, Trevor Bedford, of the Fred Hutchinson Cancer Research Center in Seattle, told the American Association for the Advancement of Science in February: ‘There is no evidence whatsoever of genetic engineering that we can find.

‘The evidence we have is that the mutations (in the virus) are completely consistent with natural evolution.’

At the time more than 100 genetic sequences of the virus had already been published.

A more widely acceptable theory suggests that the virus came from bats before jumping to humans via a second intermediate source.

Ms Yan wrote in her paper that theories the virus is from nature and the meat market in Wuhan are a ‘smoke screen’, alleging she was told this by CDC scientists working in China.

She has previously accused Beijing of lying about when it learned of the killer infection and engaging in an extensive cover-up.

Ms Yan claims she fled to Hong Kong and escaped to America in April to ‘raise awareness’ of the pandemic.

She claims she was working at the Hong Kong School of Public Health, a reference laboratory for the World Health Organisation, but she was cut off after trying to alert people to human-to-human transmission of the virus in December.

She also claims that before leaving China her information was wiped from the Government database.

The lab has denied that Ms Yan ever ‘conducted any research on human-to-human transmission’ and said her assertions have ‘no scientific basis’. 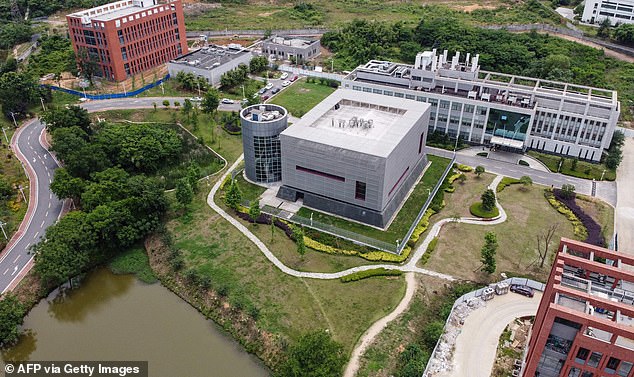 It has been alleged that the Wuhan lab in China, pictured above, is where the coronavirus was developed. However, there is no evidence to back this claim

In April incumbent US president Donald Trump claimed he had seen evidence that the coronavirus was built in a laboratory in Wuhan as he suggested the Government may impose sanctions on China in response.

‘Yes I have. Yes I have,’ Trump said when asked if he had seen proof the virus originated in the Wuhan Institute of Technology.

However, the president would not divulge what the evidence was that confirmed his suspicions, when asked by a reporter.

The lab in question is located near the wet market in Wuhan, which is thought to have been the centre of the outbreak.

University Challenge viewers slam the BBC over lack of diversity

Van full of booze is stopped at Manchester Metropolitan University

Victims of Nigel Leat, 60, left in fear as paedophile could be released from jail within weeks

Two kangaroos are found clinging to life after being shot with arrows – days...

Saira Khan reveals her family are ‘frightened for her’ for speaking...

University Challenge viewers slam the BBC over lack of diversity

Customers who cancel food delivery orders could be JAILED for six...

Jeremy Corbyn’s brother Piers gets first £10,000 fine in London for...