A new documentary will answer the biggest questions that owners have about their pet cats.

Cat Tales: In From the Wild, which airs on BBC Four this evening, has delved into the behaviour and origins of domesticated cats, revealing that the first feline/human relationship dates back 9,500 years ago.

Experts on the programme claim that humans are hardwired to love cats because their meows replicate the cries of a baby, that cats are able to recognise our human emotions – and that the mice they bring into the kitchen may not be a gift.

Viewers will learn why cats have less expressive faces than dogs, the subtle signs that suggest they’re in pain, and that the animals can actually be trained, but only in exchange for food.

Cat Tales: In From the Wild, which airs on BBC Four this evening will answer the biggest questions that owners have about their pet cats. Pictured, Dr. Lauren Finka at Nottingham Trent University Cat lab

Professor Morten Kringelbach, of the University of Oxford, is a professor of neuroscience and researches how human pleasure works, including why we find babies and animals so cute.

He told that for years, cats have been unwittingly exploiting humans into taking care of them, by replicating the sound of a baby’s cry when they meow.

The documentary sees the professor use a Magnetoencephalograph (MEG) to map and measure the electric activity of a woman’s brain in real time, and she is played the sound of an adult crying, a baby crying and a cat meowing.

‘She seems to be striking similarity between the way that we process a cat meowing and that of a baby crying,’ he said. 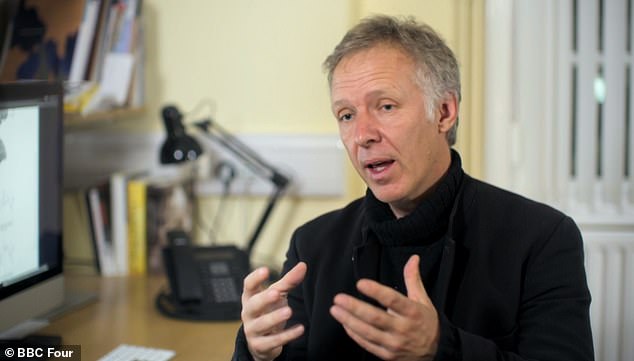 Professor Morten Kringelbach, of the University of Oxford (pictured) researches how human pleasure works, including why we find babies and animals so cute 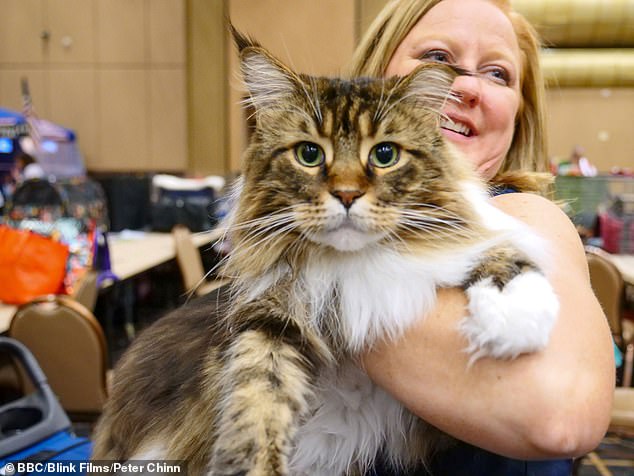 He told that human’s are hardwired to love cats because their meow replicates the cry of a baby. Pictured, a cat with it’s owner at the Jazzy Cat’s Show in Las Vegas

Explaining the results, he went on: ‘We get activity in the audio cortexes as we do with anything else. But before we become conscious of it, we hear activity in the orbitofrontal cortex, suggesting that this is something we need to take care of.’

He told that cats don’t meow when human’s aren’t around, and that while they may not be entirely aware of their manipulation, they ‘know it works well’.

‘Meowing in adult cats is interesting, because it turns out they only really do it to humans’, he told. ‘It’s not necessarily something that is conscious, they just know it works just like we knew smiling at our parents worked when we were kids.’

He told that cats don’t meow when human’s aren’t around, and that while they may be unaware of their manipulation, they ‘know it works well’

He said: ‘People have been speculating about it for hundreds of years. Now with the advent of molecular genetic techniques, we can really drill down and say definitively where domestic cats come from.’

Archaeology has pinpointed one of the earliest ever pet cats – the moment when human met cat 9,500 years ago in 7500 BC. It was found in an ancient Cypriot burial by archaeologist Jean-Denis Vigne.

Meanwhile, experts explore the difference between cats and dogs, and why canines seem to have more expressive faces, and felines seem colder and more emotionless.

‘Historically cats aren’t seen as very expressive,’ told Dr. Lauren Finka of Nottingham of Trent University. ‘So there is that idea they are particularly cold when it comes to interacting with us.

‘They’re not really able to frown or able to have that sad puppy dog expression. They don’t have the right muscular shape for that.’ 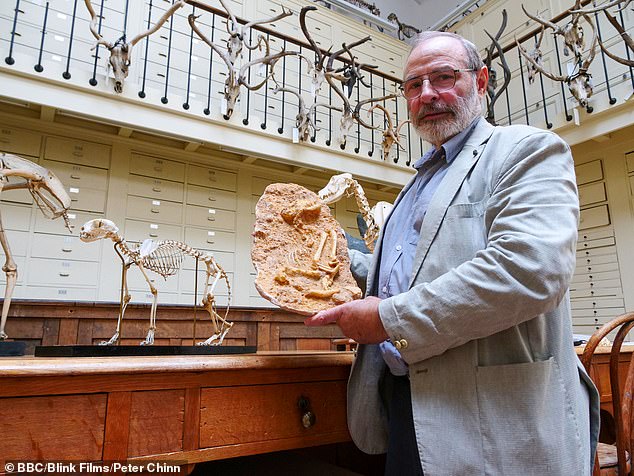 Archaeology has pinpointed one of the earliest ever pet cats – the moment when human met cat 9,500 years ago in 7500 BC,  found in an ancient Cypriot burial by archaeologist Jean-Denis Vigne (pictured)

Cats don’t have the frontalis muscle, which is responsible for raising the inner eyebrow and are physically not capable of having faces as expressive as dogs.

However, there are subtle ways of telling when a cat is in pain or uncomfortable. If their ears are turning very slightly outwards and down or there is a tiny reduction in distance between cheek, mouth and nose region.

But Dr Finka added: ‘It’s very subtle, in terms of the average cat owner looking at a face it may be problematic.’

The expert has also undergone research to tell if cats are able to read human emotions, admitting we know less about their cognitive abilities than other animals because they are harder to test.

An example of the experiment included a woman in a room with a cat, making different facial expressions and assessing the animal’s reaction, and while the cat’s behaviour changes – their reactions are much stronger towards their owners. 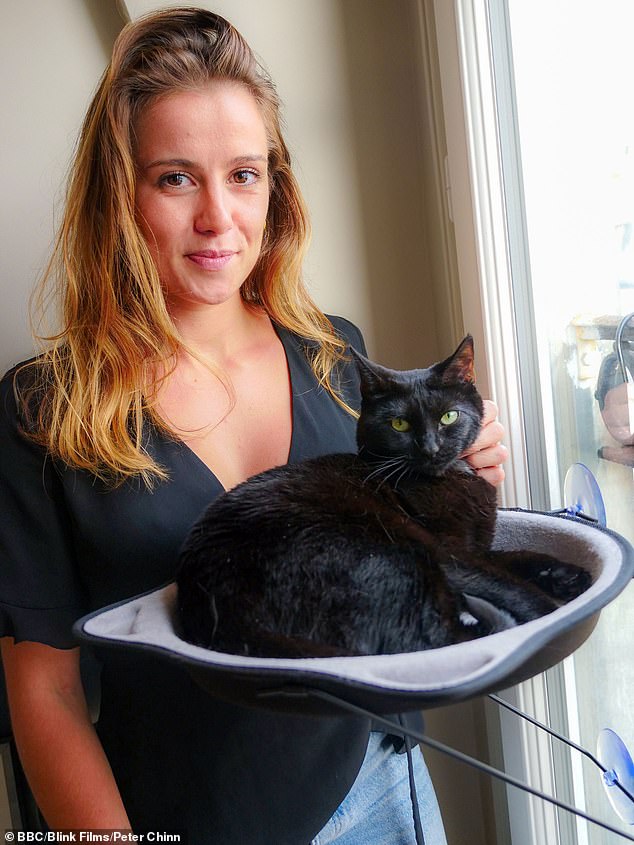 Other research shows that cats don’t bring mice into their home as gifts. Pictured,cat owner Eloise Seriau with her black cat, Paris

‘What the research suggests is that they are able to differentiate between our different expressions’, she told, ‘And use this to change the way they are behaving,.

‘The behaviour of owner is much more important to the cat, because we are the ones who feed them and look after them’.

Another common misconception about pet cats is that they are bringing prey such as mice or small birds, into their owner’s home as a ‘gift’, when really they’re bringing their prey into their ‘core territory’, where they feel safe and know they have an advantage.

‘Lots of people think that their pet cats bring them gifts, tells another of the show’s experts, ‘In the form of small rodents or birds, but actually the cat does not believe it’s a gift.

‘The cat will often bring home the prey caught because home is a core territory to a cat, the place where it feels safe.’ 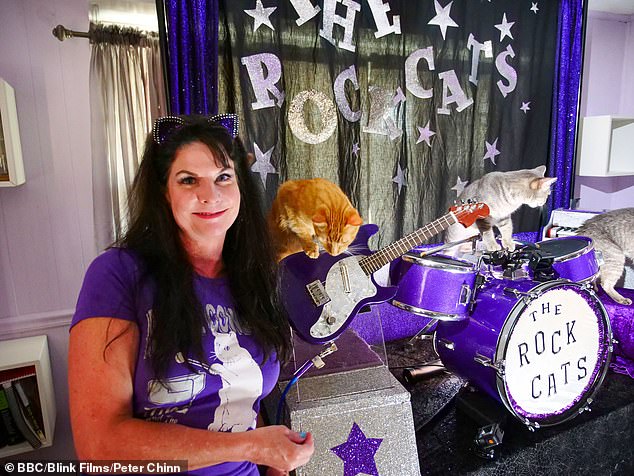 Samantha Martin (pictured) of feline performers at Acro-Cats has trained her troupe of cats using operant conditioning, which means she rewards them with food every time they correctly perform a trick 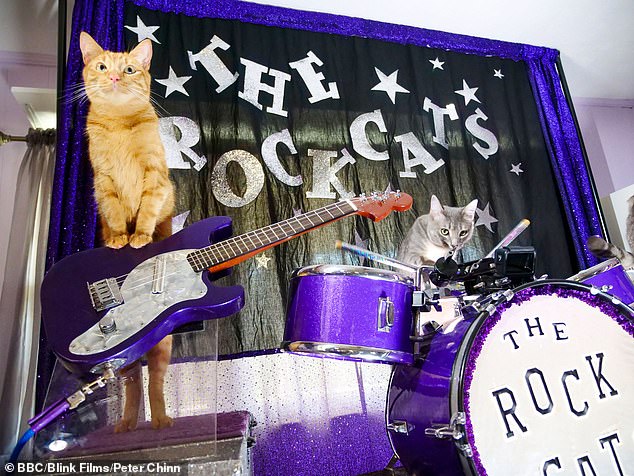 Acro-Cats is a circus troupe of domestic cats and a few other small animals, founded by animal trainer Samantha in Chicago

Finally, the documentary will dispel the myth that cats are unable to be trained, with Samantha Martin of feline performers at Acro-Cats an example of cats who have been trained to perform shows for thousands of quests every week.

Acro-Cats is a circus troupe of domestic cats and a few other small animals, founded by animal trainer Samantha in Chicago, and usually spends most of the year touring the US with their show.

The trainer uses operant conditioning to train her cats, which means she rewards them with food every time they correctly perform a trick.

‘Cats are brilliant, she said, ‘People really underestimate the brilliance of cats. By training them, they get to use their brain’.

‘Training them, they get to use their brains they get to figure out what it is that I want from them’.

But veterinary behaviorist with San Francisco SPCA, Dr. Wailani Sung, says that the cats behaviour is all down to their desire for food.

‘The right motivation for a lot of cats is not to please us, she told.

‘If you want to train a cat, the motivator is going to be food, food is a primary reinforcer, it is something they cannot live without. So most cats can be trained to work for that food.’

Cat Tales: In From the Wild airs on BBC Four this evening at 9pm

Ecology: Beekeeping has become TOO trendy and almost unsustainable in some urban areas, study warns

Ecology: Beekeeping has become TOO trendy and almost unsustainable in some...

How a sleepy town on Gunnedah is rocked by school holiday...