Hopes of a Brexit deal by next month were put at 50/50 yesterday as No 10 said the EU had a ‘more constructive’ attitude but still had not bridged significant gaps.

A deal or no deal are both still possible outcomes ahead of a European Council summit in mid-October, British officials said.

They warned there was still no agreement over the key issues of fisheries and ‘level playing field’ rules on areas such as competition and state aid.

The comments appeared to scotch reports from Brussels that the ‘tide is turning’ and that Downing Street was ‘cautiously optimistic’ a deal would be done.

Both sides have agreed that the European Council summit on October 15 is the last opportunity to agree a trade deal.

A Government official said yesterday: ‘We are in the final period of negotiations.

Michel Barnier, the EU’s chief negotiator, returned to Brussels from London yesterday after another round of informal talks ended without a breakthrough

‘There remains a lot of work to do and either outcome is still possible. In particular, the differences on fisheries and the level playing field remain significant.

‘If the gaps in these areas are to be bridged, the EU’s more constructive attitude will need to be translated into more realistic policy positions.’

Talks between the two sides have been deadlocked for months because of disagreements on key issues.

Michel Barnier, the EU’s chief negotiator, returned to Brussels from London yesterday after another round of informal talks ended without a breakthrough.

EU diplomats also suggested significant progress was yet to be made.

It came after reports overnight that there was a ‘cautious but growing optimism in Whitehall’.

The Times reported that there was now a ‘more positive attitude’ surrounding negotiations and that a ‘deal is coming into view’.

Earlier yesterday, Downing Street said there had been ‘useful exchanges’ with Brussels in recent weeks.

The Prime Minister’s deputy official spokesman said: ‘Progress has been made in certain areas… but we’ve always been clear that a number of challenging areas remain, which is why we continue to be committed to working hard to reach an agreement and we look forward to the next negotiating round in Brussels.’

The comments from No 10 came after an EU official told the Politico website ‘it seems like the tide is turning’. 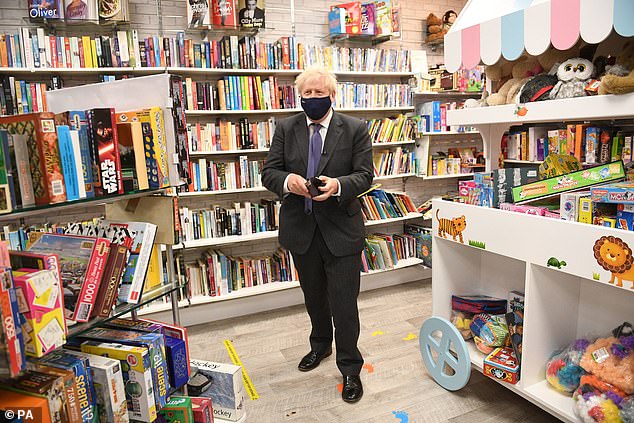 A deal or no deal are both still possible outcomes ahead of a European Council summit in mid-October, British officials said

Relations between Britain and the bloc plummeted in recent weeks after Mr Johnson published plans to override parts of the Brexit divorce deal, but tensions appear to be easing.

However, European Council president Charles Michel suggested the EU would not give in yesterday in his speech to the UN General Assembly.

‘From now on, we will better enforce the level playing field in a market open to those who respect its standards, whether they leave our union or want to move closer to it,’ he said.

In a clear swipe at Mr Johnson, he added: ‘Respect for treaties, basic principle of international law, comes to be considered optional even by those who, until recently, were its historical guarantors.’

One suggested there would be an increased risk of no deal if there was no major progress on key issues in next week’s negotiating round.

A spokesman for Mr Barnier said he ‘is neither optimistic nor pessimistic but he is determined to reach a deal’.

Shoppers are warned of £3.1BILLION EU food bill as experts claim our weekly shop will get more expensive unless the UK strikes free trade deal

The weekly food shop will get more expensive unless a free trade deal is reached with the EU, experts warn.

The BRC said retailers would have ‘nowhere to go other than to raise the price of food’ to mitigate the trade tariffs if there is no deal before Christmas.

It added that many non-food retailers would also face large tariff bills for EU-sourced products.

Andrew Opie, from the BRC, said: ‘Unless we negotiate a zero-tariff deal with the EU, the public will face higher prices for their weekly shop.

‘This would prevent harm to shoppers, retailers and the wider economy.’

The EU is the UK’s largest trading partner and represents four-fifths of food imports, the BRC said.

In May, the UK published its new tariff schedule, which will be implemented by January 1 next year if a deal is not agreed.

A spokesman for the Prime Minister said: ‘We continue to work hard to reach a deal with the EU and our aim has been to have a zero-tariff, zero-quota Free Trade Agreement and we look forward to continuing those discussions next week.’

Can YOU answer these basic questions on biology correctly?

More than THREE QUARTERS of pubs could reopen if social distancing rule is relaxed...

Can YOU answer these basic questions on biology correctly?

Gavin Williamson insists brutal curbs ARE ‘having an impact’ after study...

Mystery ‘triangle shape’ is spotted in Area 51 hangar after pilot...