Surfboard that was lost in Hawaii resurfaces six months later more than 5,200 miles away in the Philippines

By Marlene Lenthang For Dailymail.com

A man who lost his surfboard while riding the waves of Hawaii has revealed that his beloved board has resurfaced more than 5,000 miles away in the Philippines.

Doug Falter, a photographer and surfer, lost his board in Waimea Bay, Oahu, Hawaii in February 2018 during a day out in the water.

‘After catching so many waves I finally wiped out on one and my @lylecarlsonsurfboards board floated away after the leash came off my ankle at around 6:00 pm,’ he said recalling losing his board on February 3.

‘Having never heard from anyone I figured it was lost at sea,’ Falter added.

But a couple weeks ago he was dumbstruck to discover the surfboard manufacturer shared a post about a man finding the very same board more than 5,200 miles away in the Philippines.

Surfer and photographer Doug Falter lost his beloved surfboard (left in October 2015) while riding the swells in Hawaii in February 2018. It resurfaced six months later in August 2018 in the Philippines where Giovanne Branzuela purchased it from a local fisherman. Branzuela pictured right at Sarangani Island in the Philippines in 2020. The board turned from a pale blue to a yellow color in the long journey across the Pacific Ocean 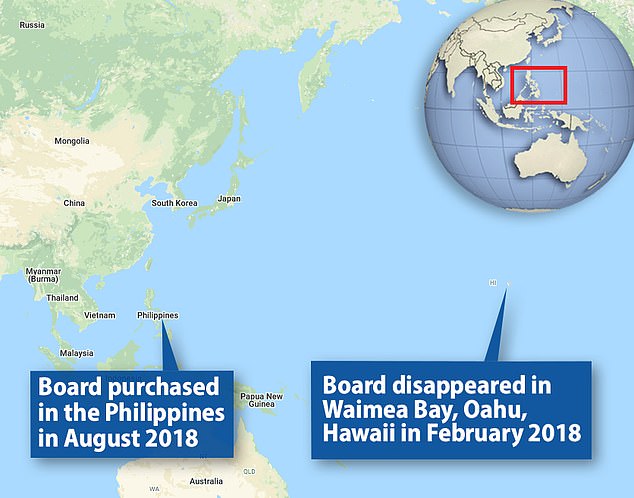 The board traveled more than 5,200 miles from Hawaii to the Philippines

The new owner was Giovanne Branzuela, a 38-year-old primary school teacher in the southern Philippines, who bought the board for $40 from a local fisherman, who found it in August 2018 – six months after it vanished from Falter’s sight.

Branzuela purchased the board to learn how to surf and contacted Hawaii-based board-shaper Lyle Carson as his name was etched on the board. Carson then told Falter about the incredible discovery.

The board had turned from a pale blue to a yellowish hue in its long voyage across the Pacific Ocean. 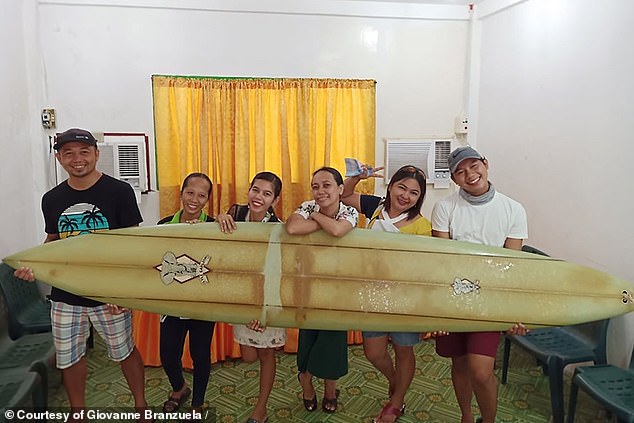 ‘It was my first big wave surfboard custom shaped for myself. I surfed it on the biggest days I’ve ever surfed in my life,’ Falter said to AFP on his board.

‘This is 5,200 miles away! Apparently he bought it from a fisherman to learn how to surf. As bummed as I was when I lost it, now I am happy to know my board fell into the hands of someone wanting to learn the sport,’ Falter shared on Facebook.

‘It turned out it’s a surfboard from Hawaii. I couldn’t believe it myself. It’s been my dream to learn to surf and ride the big waves here,’ Branzuela said to AFP.

‘For now I can use his surfboard. I told him I will take good care of it,’ he added.

Falter said if it weren’t for travel restrictions he would have visited Branzuela. 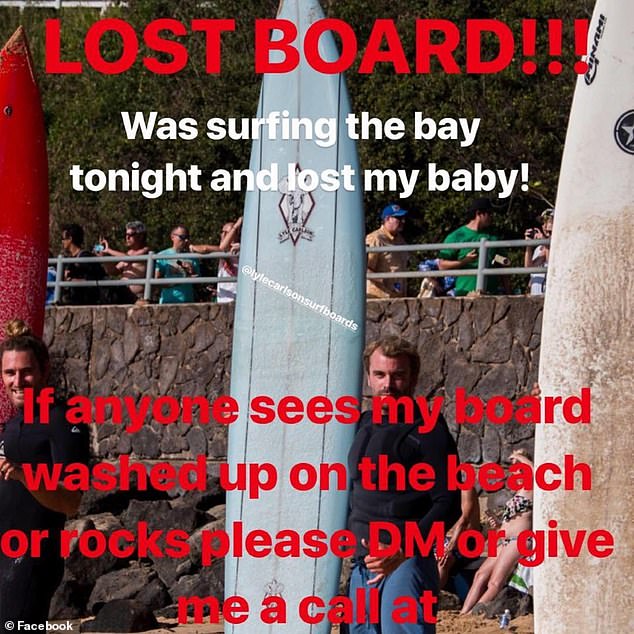 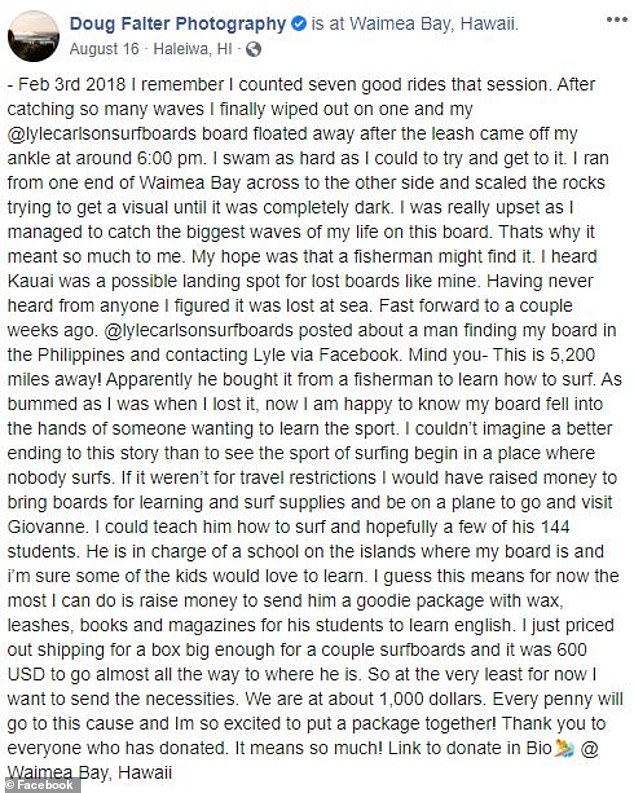 ‘I could teach him how to surf and hopefully a few of his 144 students,’ he said.

Now he’s raising money to send out some surfboards, surf gear and books and magazines for Branzuela’s students to learn English.

‘It’s an excuse for me to go to the Philippines and visit and basically complete the story. I think it would be a great ending to … teach him how to surf,’ Falter added.

The ten best walking safaris around the world, from India to Ethiopia

British firm fires a 6.5ft-long rocket 20,000ft into the air from Shetland

How rural areas can get faster broadband

It’s official, these are Spain’s most beautiful villages so says Los...