A Chicago mother who has been charged with first-degree murder in the death of her five-year-old daughter was denied bond this morning after prosecutors described how the suspect allegedly slashed her child’s throat with a serrated knife in front of the girl’s older sister.

Officers were called to a home in the 3200 block of West Fulton Boulevard at around 9.30am on Saturday and found paramedics already working on the girl, identified as Serenity Arrington. She had been stabbed multiple times.

The Cook County medical examiner’s office said Serenity was taken to Stroger Hospital where she was pronounced dead. 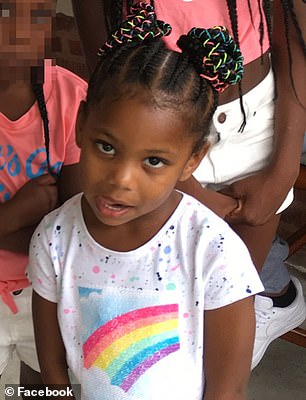 Simone Austin, 27 (left), has been charged with first-degree murder in the stabbing death of her five-year-old daughter, Serenity Arrington (right) 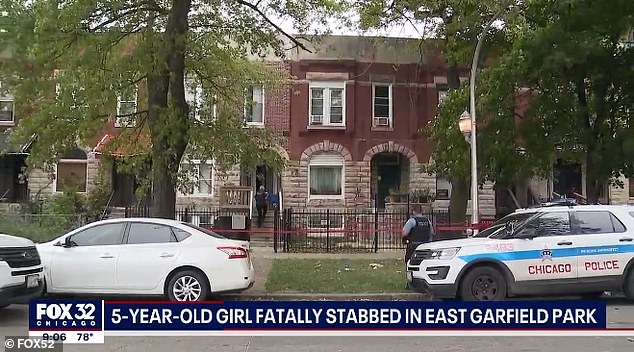 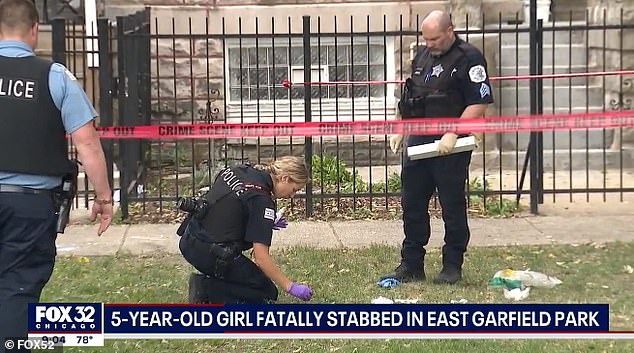 The five-year-old had been stabbed multiple times in the neck, resulting in her death

An autopsy conducted on Sunday showed the child died of ‘multiple incised wounds’ to the neck and declared her death a homicide.

Serenity’s mother, 27-year-old Simone Austin, was arrested and charged with first-degree murder after walking up to the police at the scene of the crime.

According to investigators, the stabbing took place inside the house of Serenity’s grandfather. Police revealed they were familiar with the residence from previous calls for service.

‘There were prior calls to the address. We just don’t know at this time why … what happened today. But there were multiple calls,’ Chicago police officer Jose Jara told WGN.

At Austin’s bond hearing this morning, prosecutors told the court that Serenity’s mother had asked her eight-year-old daughter to leave the room on Saturday morning.

The young girl watched through a hole in the doorknob how her mother pulled a serrated knife from under a pillow and slashed Serenity’s neck, according to prosecutors.

When the older sister saw her mother repeatedly stabbing Serenity, she tried to save the child by barging inside the bedroom and pulling on Austin’s hair.

The girls’ grandfather was away at a coffee shop at the time. When he returned, he found the front door locked. He then went to the kitchen door in the back of the house and encountered his older granddaughter who told him that her mother had stabbed Serenity, according to the prosecution.

The grandfather witnessed Austin taking off her clothes when he entered the apartment. Meanwhile, the eight-year-old ran outside yelling about her sister’s killing.

Neighbors said Austin had moved to the block about a month ago with Serenity, her sisters and their pet cat. They recalled seeing the woman sit outside while her daughters played.

No motive has been revealed but investigators are trying to determine whether Austin has had a history of mental illness.

The mother is due in court for a bond hearing later today. 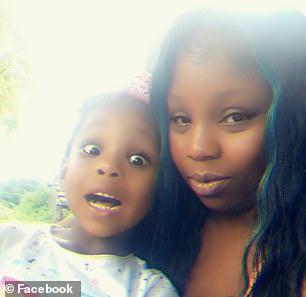 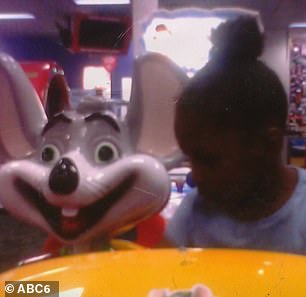 Austin was arrested after walking up to the police. The 27-year-old has other children 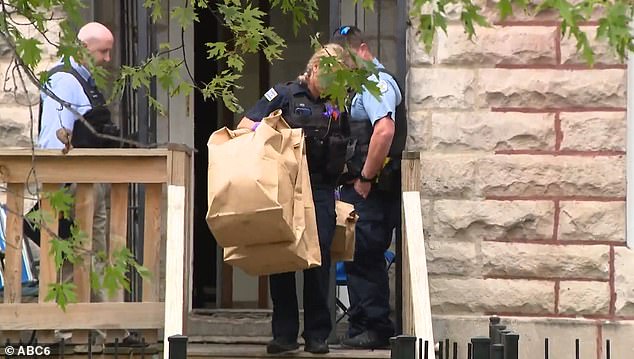 It was yet another weekend marred by violence bloodshed in Chicago. According to multiple reports, a woman in her 20s was found stabbed to death in the North Branch of the Chicago River, and at least 51 people were shot, nine of them fatally, reported CBS Chicago.

Just after 10pm on Friday, 19-year-old Cornelius Pulthus Jr was walking with two others in an alley in the Roseland neighborhood when gunshots rang out. The man was struck by bullets in the chest and back, and was pronounced dead at Chicago Medical Center.

At 3.30am on Saturday, a group of people were standing in 2400 block of West Lithuanian Plaza Court when someone in a passing car opened fire, shooting and injuring two men and two women. Three of the victims were hospitalized in good condition, and one was in serious condition after taking a bullet to the abdomen. 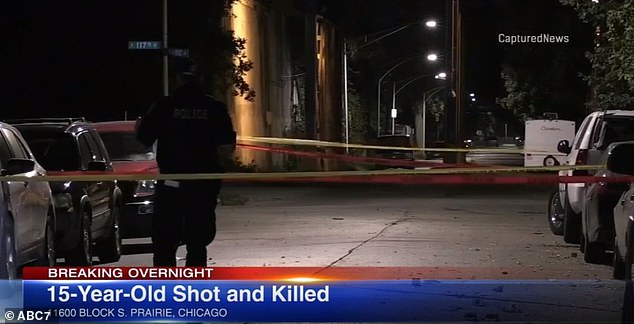 Omar Alvarado, 15, was shot in the head in the 11600 block of South Prairie Avenue on Saturday

Shortly after 4am on Saturday, 42-year-old Rayalecio Perman was at a backyard gathering at a home in the 7000 block of South Harper Avenue when a gunman opened fire, fatally shooting him in the back.

Less than an hour later, police responded to reports of shots fired in the 200 block of North Latrobe Avenue and found 20-year-old Richard Soward riddled with bullets. He was pronounced dead at the scene.

At 11.10am on Saturday, 17-year-old Avion Aldridge was pronounced dead from gunshot wounds to the torso after being ambushed by two assailants in an alley behind the 200 block of North Leamington Avenue.

At 9.20pm that night, 15-yer-old Omar Alvarado was shot in the head in the 11600 block of South Prairie Avenue. He was later pronounced dead at Advocate Christ Medical Center.

Shortly after midnight on Sunday, two passersby came upon the lifeless body of a woman in the river behind the 3400 block of North Rockwell Street.

The victim had been stabbed multiple times in her face and neck. Police are investigating her death as a homicide.

Shortly before 4pm on Sunday, two 14-year-old boys were walking on East 123rd Street when someone opened fire from a passing vehicle, hitting one of the teens in the right thigh and the other in the left arm. Both were listed as stable at Comer Children’s Hospital.

At around 5pm on Sunday, a 20-year-old man was dropped off at St. Bernard Hospital with a gunshot wound to the head. The unnamed victim was pronounced dead from his injury. 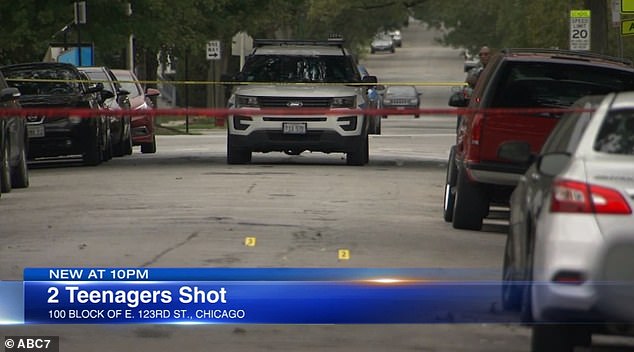 Two 14-year-old boys were walking on East 123rd Street on Sunday when someone opened fire from a passing vehicle, injuring both boys

Less than two hours later, two men, ages 54 and 66, were sitting in a car parked in the 6100 block of South Bishop Street when someone opened fire, shooting the older man in the head and killing him, and wounding his companion.

Just before 11pm on Sunday, a drive-by shooting claimed the life of a 21-year-old man as he was walking in the 600 block of North Sawyer Avenue.

Last weekend, Chicago saw 45 shootings, 10 of them resulting in fatalities.

According to Chicago Police Department crime statistics cited by Chicago Sun-Times, shootings and murders in the city are up 50 per cent compared to last year.

The death of driving… by 1,000 cuts: How parking spaces are being quietly replaced by ‘Parklets’

STEPHEN GLOVER: Why do we tell migrants not to come to Britain, then make it easy for them to stay?

Today host Karl Stefanovic is ‘trying to hold onto his $2.5million-a-year salary’

Boy charged over armed robbery that left shopkeeper with a knife embedded in her...

Frequent flyer points should be saved until after travel returns

Anne Hathaway offers behind the scenes glimpse of putting on her...