A truck full of free beer for self-isolating students was turned away by security at Manchester Metropolitan University today, two days after the institution apologised for demanding that students take down posters in the windows.

Some students at the accommodation have been forced into isolation and are only able to receive food and drink through delivery services.

While other grocery deliveries were allowed into the Needham Court halls of residence, free beer from Magic Rock Brewing was turned away.

It comes as three more universities in the UK have imposed curbs on freedoms and thousands of students across the country remain in self-isolation after spikes in Covid-19 cases were reported.

University of Exeter yesterday ordered students to stay indoors and only mix with people within their household following reports that more than half of the cases confirmed in Exeter over the last week can be traced back to the university. 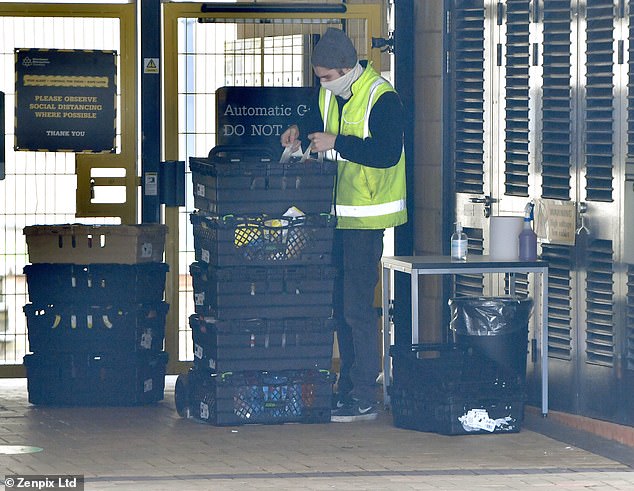 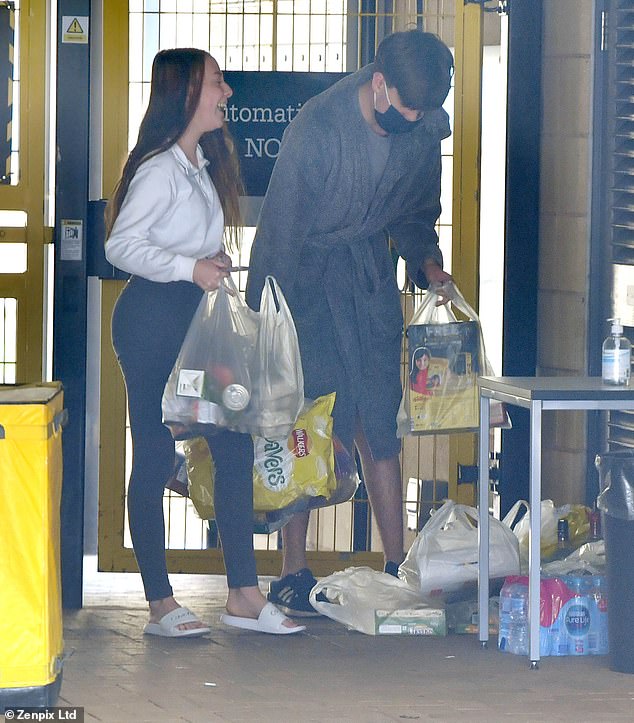 While other grocery deliveries were allowed into the Needham Court halls of residence, free beer from Magic Rock Brewing was turned away

The University of Aberystwyth put a stop to all in-person teaching after multiple students tested positive amid ‘uncertainty’ about how far the recent spike has spread.

A ‘small number’ of positive tests were reported in Queen’s University Belfast, forcing all students living in university accommodation into self isolation.

The Manchester brewery tweeted last night to say they would be arriving at Needham Court halls to deliver free beer to ‘make lockdown a little less rubbish for students stuck in’.

Magic Rock Brewing wrote: ‘STUDENTS OF MCR. We’ll be rocking up with the Magic UTE to MMU Needham Court Halls with FREE BEER tomorrow at 10am.

‘In a different hall? Let us know.’

But when the brewery’s truck turned up this morning, a witness overheard MMU security blocking its delivery because ‘it wasn’t in the best interest during the current lockdown’. 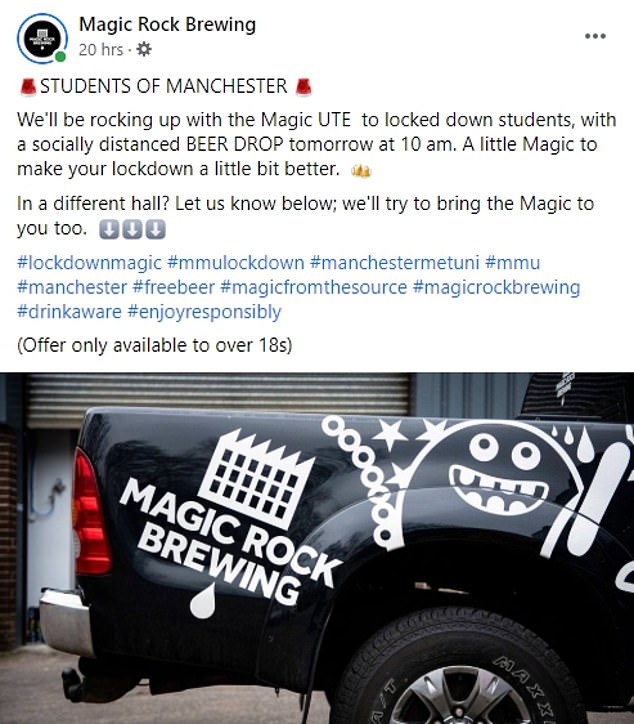 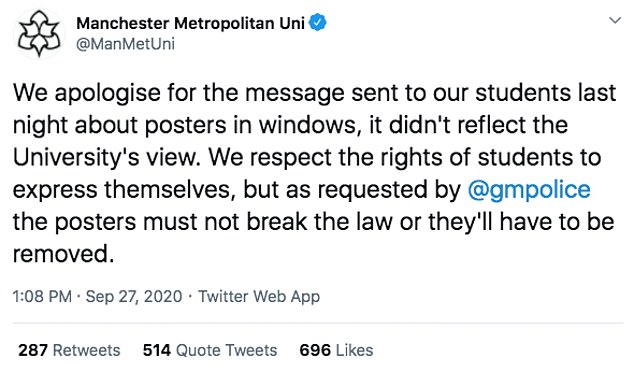 Manchester Metropolitan University was forced to apologise just two days ago after demanding that students take down posters they put up in windows in their accommodation.

The university initially sent an email to students demanding that posters ‘needed to be removed asap’.

But when students defied them, they were forced to issue an apology for disrespecting students’ rights to express themselves.

They wrote: ‘We apologise for the message sent to our students last night about posters in windows, it didn’t reflect the University’s view.

‘We respect the rights of students to express themselves, but as requested by police, the posters must not break the law or they’ll have to be removed.’ 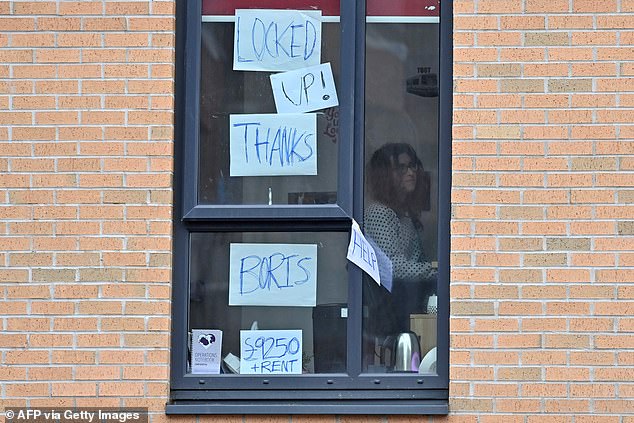 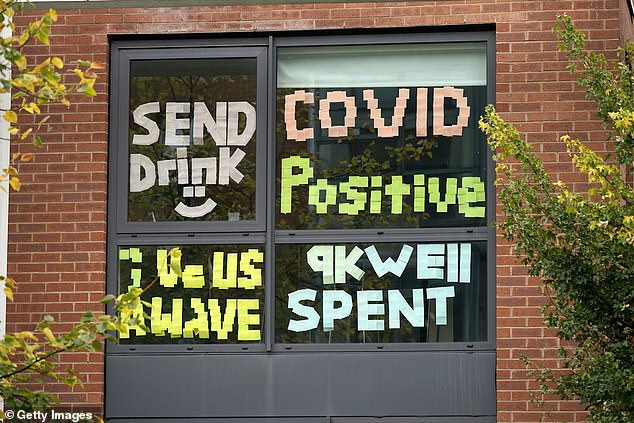 But when students defied them, they were forced to issue an apology for disrespecting students’ rights to express themselves 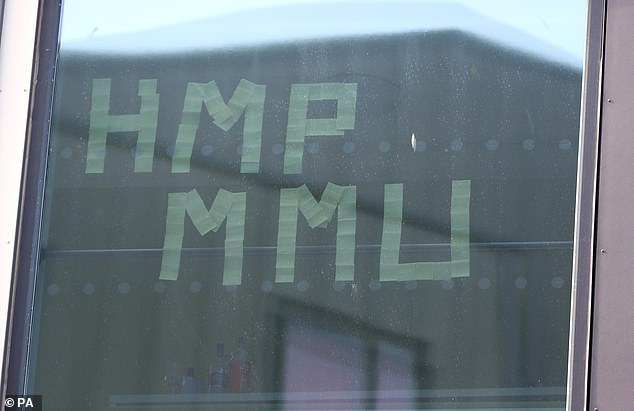 They wrote: ‘We apologise for the message sent to our students last night about posters in windows, it didn’t reflect the University’s view

So far there has been no report of a poster which breaks the law.

Thousands of students across Britain are now self-isolating for a fortnight after more than 500 cases of Covid-19 were confirmed across at least 32 universities.

Muslim students have slammed the University of Edinburgh after they were given ham sandwiches in their ‘primary school packed lunch’ food while in self-isolation.

Students who are in catered accommodation but are self-isolating have been told to stay in their rooms at the halls, which cost around £7,000-a-year, with food being delivered to them on behalf of the university.

But some said they have been forced to ‘go hungry’ or miss meals because the food delivered doesn’t meet their religious or dietary requirements.

And worried parents have slammed uni bosses over the ‘appalling’ treatment – saying students are being treated like pariahs.

Leila Peacock, 19, is a Muslim student staying at Pollock Halls – catered accommodation which costs around £7,500. 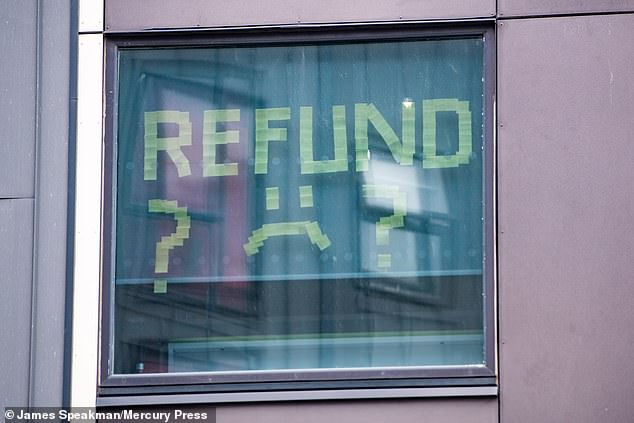 They added: ‘We respect the rights of students to express themselves, but as requested by police, the posters must not break the law or they’ll have to be removed’ 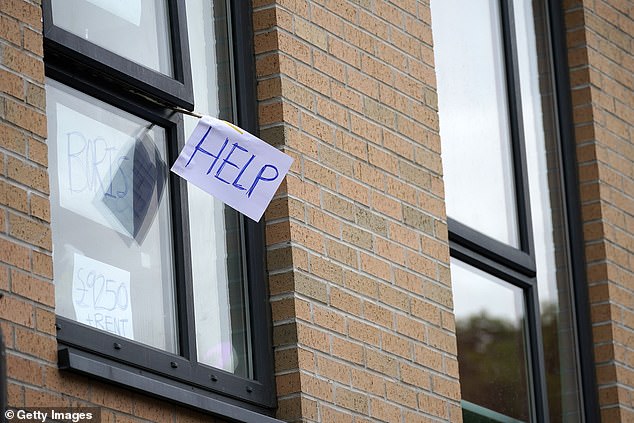 She said she was forced to go hungry when the university delivered a ham sandwich and bacon flavoured crisps to her room.

Leila slammed the ‘school child’s packed lunches’ and said she thinks she has lost weight because the food is not filling.

Leila said: ‘I’m in my fourth day of isolation, and on two out of the four days I’ve had either a ham sandwich or bacon crisps delivered to my room.

‘The first day it happened I told my floor supervisor, because he’s Muslim as well, and he had told them to make sure I get Halal food.

‘But they made the same mistake the next day.

‘Today [Monday] I’ve been given vegetarian food, but it’s mostly salad, it’s not very substantial, there’s not any carbohydrate and it’s not very nutritious. 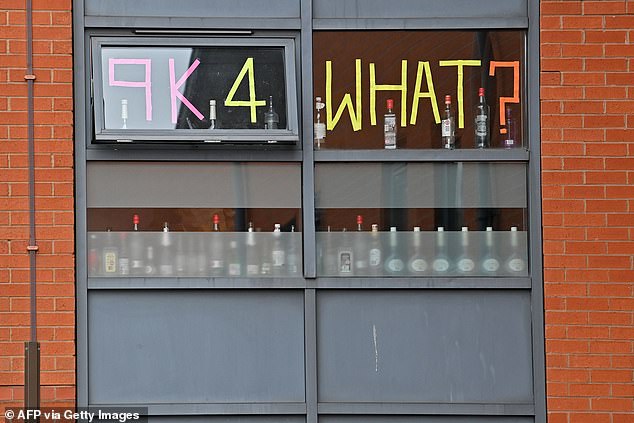 One poster in a student’s window reads: ‘9k 4 what?’ In reference to the £9,000 fees students are paying to be stuck indoors

‘I don’t think it should be that difficult to provide food, but it’s been so disappointing so far.

‘The food in the canteen is really nice, and they’ve got lots of different options, but the food I’ve been given now is like for a primary school child’s packed lunch, it’s not really enough to keep someone going.

‘I think I’ve lost weight since I’ve been here, the food is not filling enough.

‘We’re paying so much money for the accommodation and that includes the catering, and it just doesn’t seem like the money is being spent in the right places.’

The University and College Union has urged the Prime Minister to force all university teaching online and to allow students to go back home without the threat of fines, the Financial Times reports. 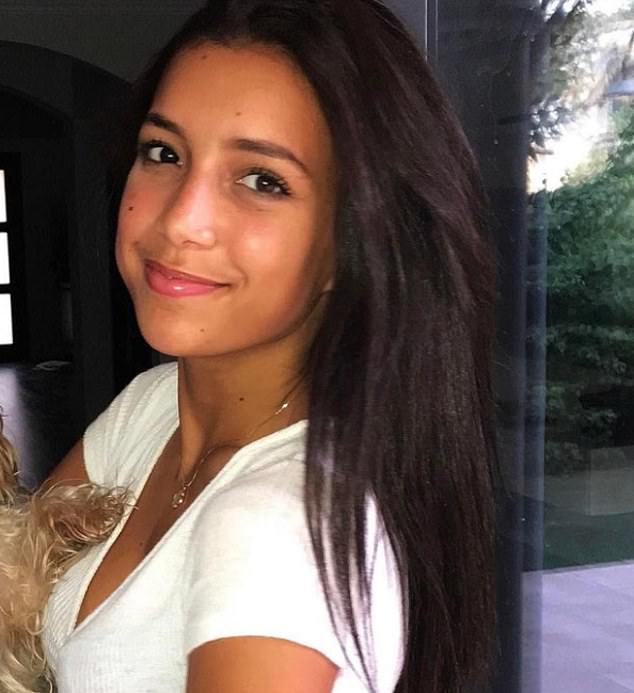 Leila Peacock, 19, is a Muslim student staying at Pollock Halls at Edinburgh university – catered accommodation which costs around £7,500

The union’s general secretary Jo Grady wrote: ‘We cannot have students forced to quarantine in halls of residence with no familiar support network, or staff forced to carry out work on site that could be conducted more safely from home.

The Russell Group – an association of 24 UK public research universities – is working on a ‘pragmatic’ approach with the government which aims to allow students to experience ‘a blended programme of in-person and online teaching’.

Some 1,700 students are already under lockdown at the Manchester Metropolitan University (MMU) campuses of Birley and Cambridge Halls.

Glasgow and Abertay universities have put 600 and 500 students into isolation.

Darcy Culverhouse, 18, who is staying in Pollock Halls at Edinburgh University, said she was worried about the lack of food being delivered to students – despite paying for catered accommodation. 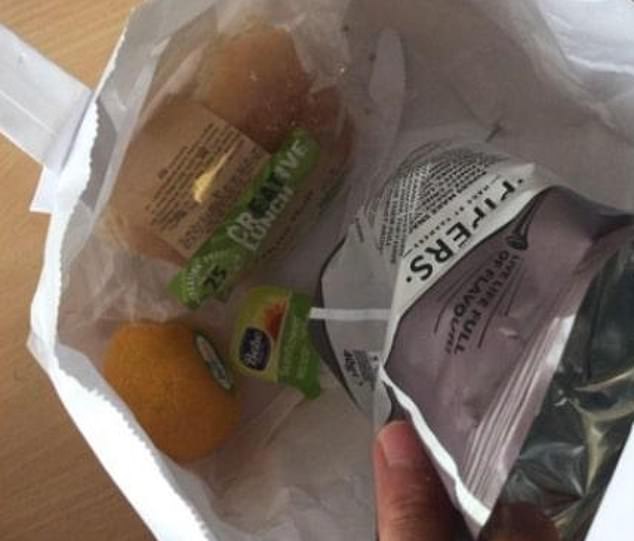 Darcy said: ‘Meals have been very inconsistent from the university.

‘People in our house have been missing dinners and breakfasts, they haven’t been delivered the meals that they are supposed to be getting in isolation.

‘And they’re going hungry because they haven’t been fed.

‘It’s a bit difficult at the moment, and as a result of this a lot of people have been leaving, firstly because they don’t feel comfortable in this environment, or secondly because they’re scared of another local lockdown.

‘Not even being brought food is a pretty basic worry, especially when we’re paying so much – we’re paying about £7,500 for this accommodation, which is catered.

‘It’s the principle as well, we’re paying them a lot of money.

Students in self-isolation in non-catered accommodation are also being delivered food, but have complained of similar issues.

Isobelle Robinson-Gordon, 19, who is living in Salisbury Court said: ‘Food often isn’t being delivered until 1pm, 2pm, or 3pm, it is poor quality, cold and there is certainly a pattern of students with dietary requirements not being met.’

One mother said her 18-year-old daughter is not being delivered food regularly and said students are being treated ‘appallingly’.

The worried mum, who spoke on the condition of anonymity said: ‘I spoke to her at one o’clock [on Sunday] and they hadn’t delivered breakfast.

‘They’re not being fed properly.

‘They are not looking after the students, either physically or mentally.

‘They put them into isolation on Friday, and then nobody was available because they only operate during office hours.

‘My daughter wasn’t given food on Friday night.

‘So even though we paid £7,000 for catered accommodation, no food was delivered on Friday.’

‘My husband spoke to the university before we went up there to ask for assurances about what would happen if there was an outbreak, because you don’t have to be a scientist to guess it’s going to happen.

‘And we were assured that if somebody had tested positive they would be removed to self catered accommodation so that they could look after themselves.

‘We knew it would be different but what surprised me is the way the university is treating them.

‘It’s all very negative, there’s no care at all.

‘As parents that’s how we feel.

‘We’re quite worried, she’s only eighteen.’

A spokesman for the University of Edinburgh said: ‘University staff are working hard to provide care and support for all students who are required to self-isolate by the Scottish Government and who are resident in University-provided accommodation.

‘Initial teething problems are now being addressed and catering staff will provide three meals a day for all students living in University-provided accommodation.

‘These meals are all available in vegan and gluten-free options to ensure that all dietary requirements are met.’

Up to 135,000 Britons may catch the coronavirus every day in winter