For five decades morals crusader Reverend Fred Nile has used his political pulpit to rail against every pursuit he sees as making Sydney the most sinful city in Australia.

Nile has called for bans on casinos, brothels and pornography, tried to reduce drinking and smoking, and urged police to crack down on organised criminals.

He has condemned homosexuality, opposed sex outside marriage and every year prayed to God that torrential rain would fall upon the Gay and Lesbian Mardis Gras.

As onetime head of the Festival of Light, founder of Call to Australia then leader of the Christian Democratic Party, Nile has waged a war for a more puritan nation. 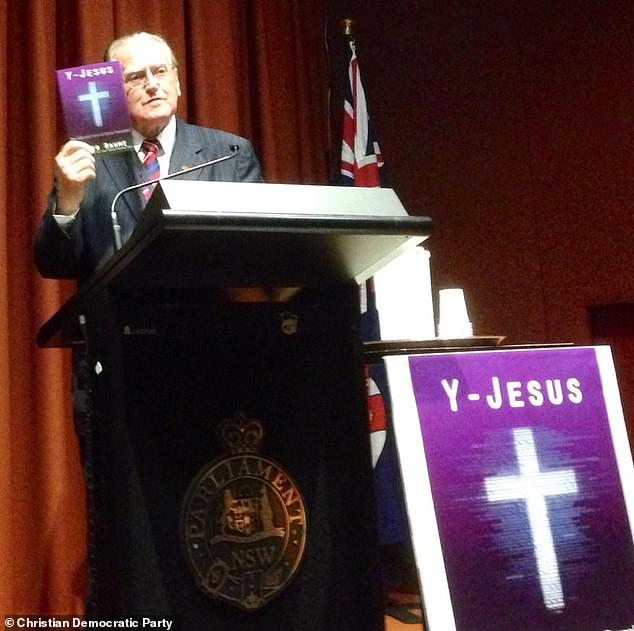 As onetime head of the Festival of Light, founder of Call to Australia then leader of the Christian Democratic Party, Fred Nile (picured) has waged a war for a more puritan nation 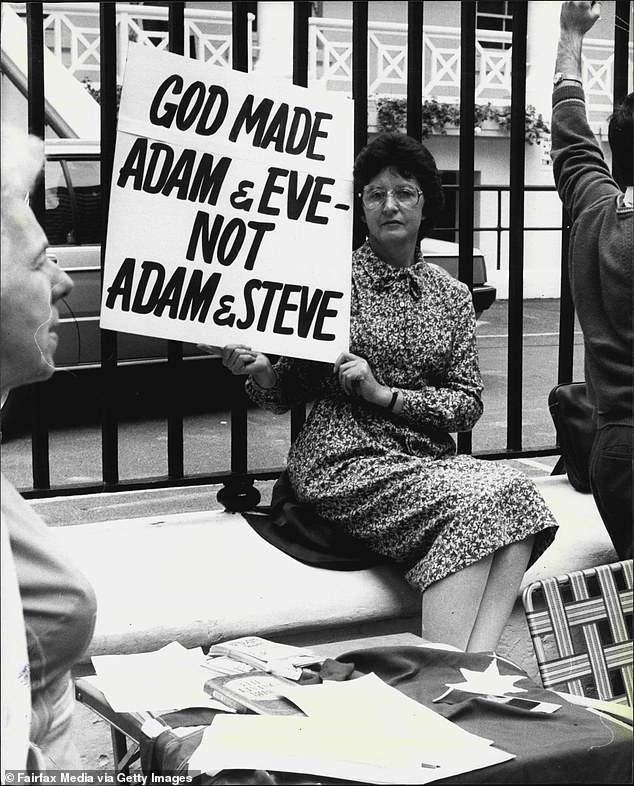 Nile has condemned homosexuality, opposed sex outside marriage and every year prayed to God that torrential rain would fall upon the Gay and Lesbian Mardis Gras. Members of his Festival of Light are pictured in 1981 outside NSW Parliament denouncing homosexuality

But in recent years his conservative voice has struggled to be heard above the more socially progressive din and his influence has considerably waned.

Nile has sat in the Upper House of the New South Wales Parliament almost continuously since his election in 1981 and is its longest-serving member.

Now 86 and his days of holding the balance of power in the Upper House gone, his Christian Democratic Party is reportedly facing de-registration.

The NSW Electoral Commission wrote to the CDP on September 17 stating its records showed party membership had fallen below 500, according to Nine Entertainment.

A party needs 750 members to stand candidates for NSW Parliament.

Nile says the de-registration threat is due to an administrative bungle but the CDP is nonetheless not the force it once was and many of his campaigns must be seen as failures.

Abortion, much to Nile’s angst, is freely available.

Homosexuals are not only still having sex, they are now able to legally marry.

Prostitution has been legalised and huge brothels flourish in the city and suburbs.

The Mardis Gras is one of Australia’s most popular annual events, attracting families to Darlinghurst’s seedy Oxford Street, and Sydney is about to get its second casino. 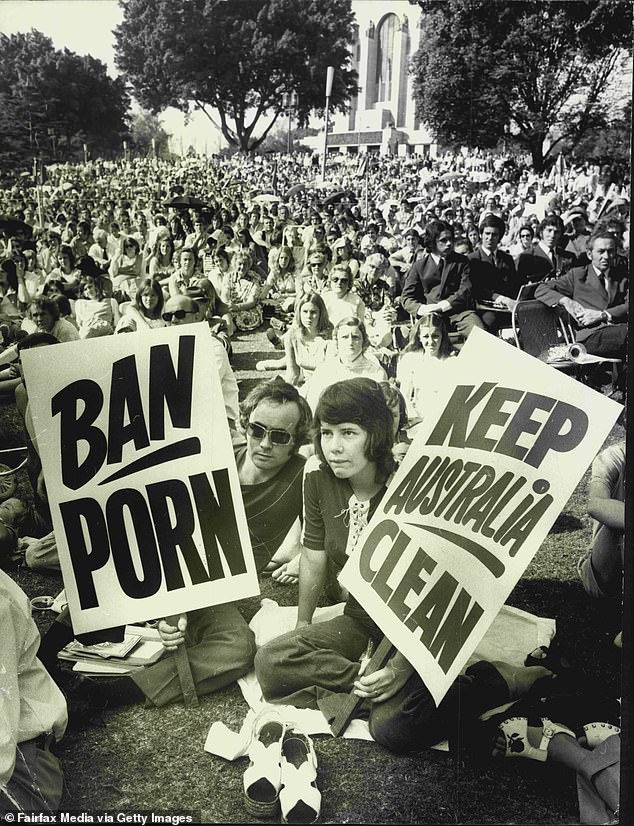 Throughout Nile’s campaign to ban the sale of pornography it was easy to obtain the most aberrant printed or filmed material and still is, if anyone with the internet could be bothered. Festival of Light protesters are pictured in Hyde Park in 1974

Nile has pushed for the legal drinking age to be raised from 18 to 21 but teenagers are still lawfully downing alcohol in night clubs and pubs all over the state.

Kings Cross is not the seething fleshpot it was but that is due to draconian lock-out laws brought in after a couple of fatal random acts of violence rather than Nile.

Throughout Nile’s campaign to ban the sale of pornography from sex shops it was easy to obtain the most aberrant printed or filmed material and still is, if anyone with the internet could be bothered.

As recently as 2016 Nile was still praying that his CDP would become a major national political party and perhaps one day be able to form government.

That year Nile celebrated 35 years as a parliamentarian when then premier and fellow Christian Mike Baird quoted Matthew’s gospel when he said: ‘Well done, good and faithful servant.’ 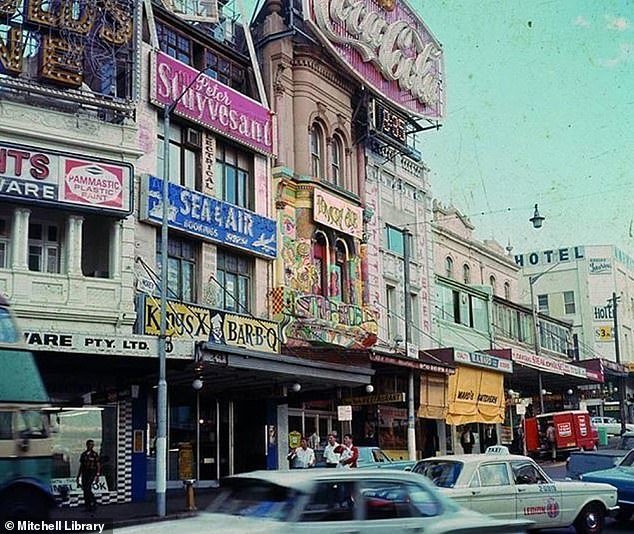 But for a man who once had the ear of premiers, the attention of the media and the support of a legion of followers, Fred Nile is running out of winnable fights.

Since Nile’s election in 1981 the CDP and its forerunner the Call To Australia Party have generally had two sitting members in the NSW Legislative Council at any time.

The party has never had success outside NSW and in that state its parliamentary representation is now down to just Nile.

In December last year Nile sacked four CDP board members and suspended several others amid party tension about who will get his seat when he retires.

Nile’s continued stance against same-sex relationships is probably the strongest example of him being out of step with modern society.

He has described homosexuality as ‘immoral, unnatural and abnormal’ and said being gay is both a ‘lifestyle choice’ and mental disorder. 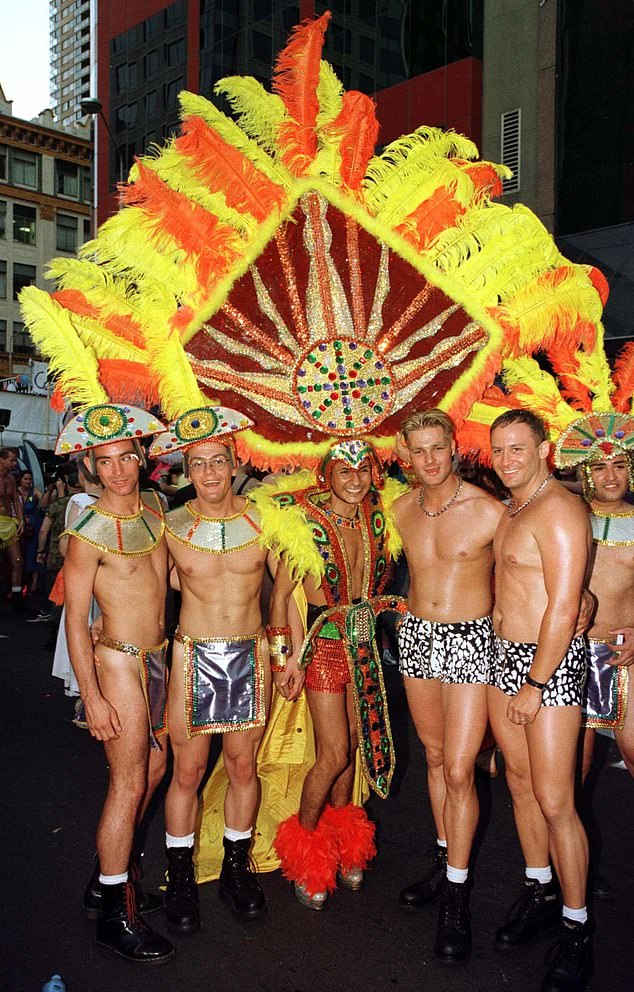 Sydney’s Mardis Gras (pictured) is one of Australia’s most popular annual events, attracting families to Darlinghurst’s seedy Oxford Street, and the city is about to get its second casino

Nile’s stance has, however, never gone as far as wanting to physically punish gays and lesbians. He is also ‘totally opposed to the bashing of homosexuals’.

He has always been against the Mardi Gras which he has called a ‘public parade of immorality and blasphemy.’

He particularly objects to the ‘indecency and obscenity in various parts of the Mardi Gras’ and has stated the parade reinforced ‘the worst stereotypes’.

His opposition to homosexual relations extends from the bedroom to the nursery and airports.

When federal Labor MP Penny Wong announced in 2011 her female partner was pregnant Nile said ‘I’m totally against a baby being brought up by two mothers.’

‘She needn’t have made it public,’ Nile said. ‘It just promotes their lesbian lifestyle and trying to make it natural where it’s unnatural.’

In 1983, as HIV/AIDS was taking hold in the gay community, Nile suggested 800 Australians returning from a homosexual conference in San Francisco be forced to go into quarantine. 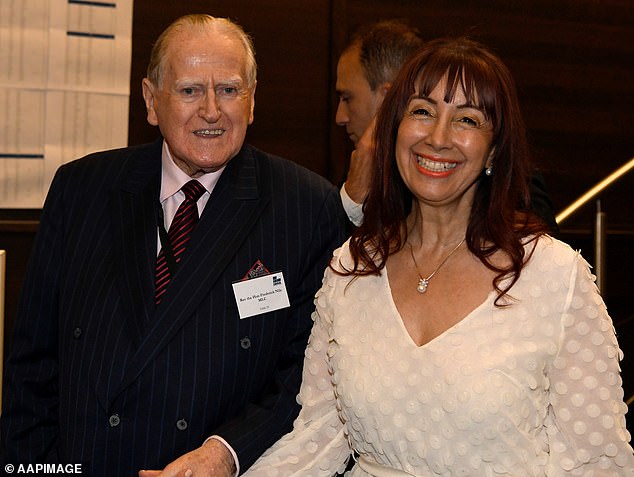 In 2013 Nile married mother-of-three Silvana Nero, who is 23 years younger. Nile has said Silvana would never replace first wife Elaine who died in 2011 and she does not call herself Mrs Nile. Nile and Silvana are pictured

The following year he unsuccessful campaigned against the decriminalisation of homosexuality in NSW.

In August 2017 as the country prepared to vote on same-sex marriage Nile used his Family Family World News newspaper to again invoke the scourge of HIV-AIDS.

‘Homosexual acts between two men are described by Almighty God as an abomination,’ he wrote.

‘An “abomination” is something that God hates – if God hates same-sex relations, and same-sex “marriage” how can Christians embrace it? Support it?

‘Remember the main cause of HIV-AIDS!’

When American priest Gene Robinson of the Episcopal Diocese of New Hampshire became the first openly gay bishop in a major Christian church Nile confronted him on television and said he should be ashamed of himself.

Nile has tried six times in parliament to have Muslim face coverings such as the burka and niqab banned from being worn at public gatherings. 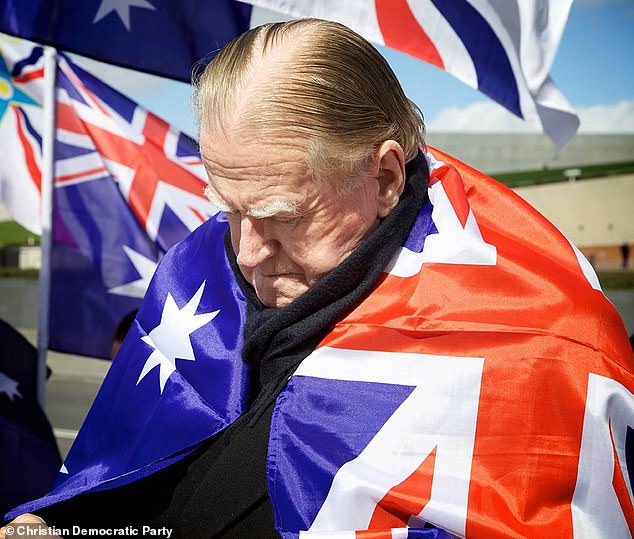 He has also pledged his Christian Democrats would ‘do what it can to stop pagan weddings and witchcraft or Wicca activities.’

But his old-fashioned values were on show again in January 2015 when he argued male hostages who had fled the Lindt Cafe siege the previous December should not be given bravery awards.

Nile was unimpressed that men held at gunpoint by Muslim extremist Man Haron Monis would leave their female fellow hostages behind.

‘Usually men try to protect the women and it seems that the men were saving their own skin and leaving the women there,’ Nile said at the time. 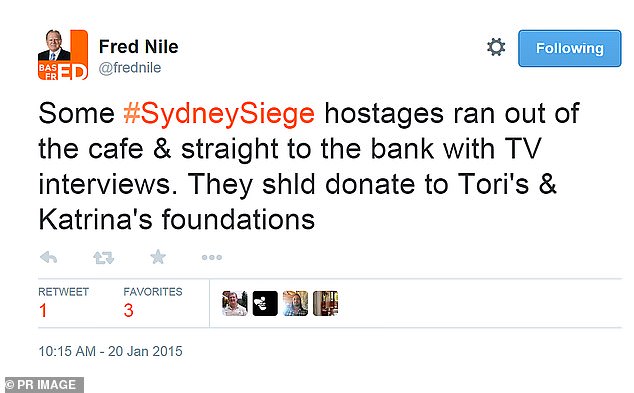 At his core Nile, a father-of-four, has always been most concerned with maintaining ‘family values’.

In 2013 Nile married mother-of-three Silvana Nero, who is 23 years younger. Nile has said Silvana would never replace Elaine and she does not call herself Mrs Nile.

Nile’s own mother was a waitress and his father a drinker and gambler who worked as a Kings Cross taxi driver.

As a youth Nile worked briefly as an SP bookie’s runner in the Cross and enjoyed typical teenage pleasures of dancing and dating.

Nile was ordained as a Congregational minister in 1964 and in 1967–68 was assistant director of the Billy Graham Crusade in Sydney. 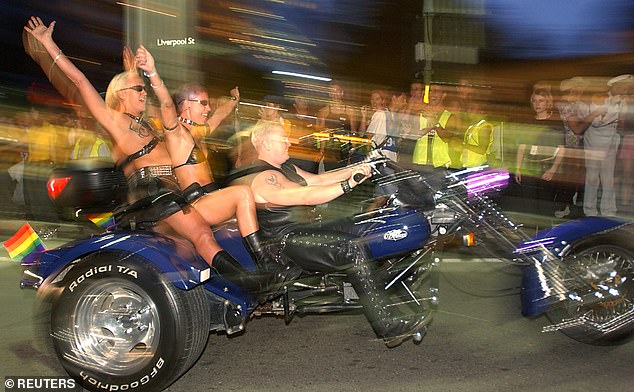 Members of the Dikes on Bikes lead the Sydney Gay and Lesbian Mardis Gras in 2002. Fred Nile has said the Mardis Gras parade reinforced ‘the worst stereotypes’

He was elected national co-ordinator and NSW director of the Australian Federation of Festival of Light in 1974 and founded the Call To Australia (Fred Nile) Group in 1977.

‘There had been a change,’ Nile said. ‘There was what they called “The Sexual Revolution”.

‘That brought the breakdown in family values. And what was being shown on television was a lot of nudity and swearing and blasphemy.

‘I’d been born in Kings Cross so I had a personal interest in it. I had to restore the standards. I never expected to get elected.’

Nile’s current parliamentary term expires in 2023 when he will be 88.

The Gospel according to Fred Nile 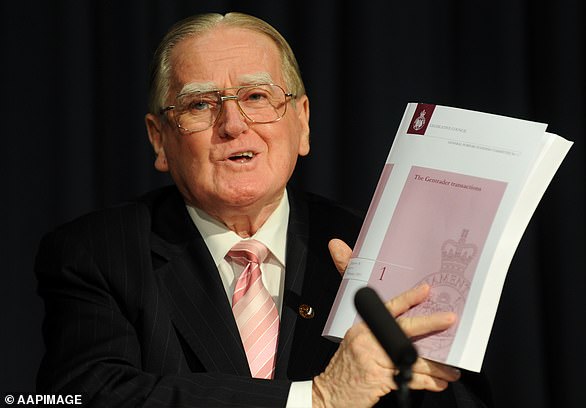 Reverend Fred Nile outlined his political aims in his maiden speech when elected to the NSW Legislative Council in 1981. This is an extract:

‘I believe the people of NSW have elected me because they have been profoundly disturbed by some of the permissive developments in recent years – I would say over the past ten years at least – which are changing the moral and social climate of our State.

‘In response to the wishes of more than 200,000 NSW citizens who voted for me, in this House I pledge myself to carry out the immediate objectives, so far as I can, of our independent citizens’ group, with the help of God and the assistance of members of both Houses.

‘This means I shall promote the concept of family impact studies, family educational and medical benefits, low interest rates for home and housing loans, first family home finance plans, family and community planning in new areas and so on, to create genuine environmental centres that provide warmth, security and entertainment.

‘Second, I shall do all I can to improve the protection of children, including the unborn, from all forms of exploitation and abuse such as drugs, pornography, vice and so on, and so help build their lives on a solid foundation of faith, hope and love, and wherever possible, in a secure and loving family environment.

‘Finally, I would seek to build a caring and responsible society based on the Judeo-Christian ethic of the Bible, the Ten Commandments and the Beatitudes which are upheld by other religions in this country and other countries of the world and by people of good will.

‘I will do all lean to discourage the growth of greed and materialism, which is being promoted through various activities such as gambling and the permissive playboy philosophy.

Father, 30, drowned while boating with his son after taking ‘large amount’ of cocaine, inquest hears

Leviathans of the British establishment are labelled China’s ‘useful idiots’

Is it just me? Or do you hate your smug friends, too? asks CLAUDIA...

Father, 30, drowned while boating with his son after taking ‘large...