Kim Kardashian has settled a $6.1million lawsuit with her former bodyguard accused of failing to protect her during her Paris robbery.

The reality star, 39, sued Pascal Duvier and his companies Protect Security and Balali Investments Inc for negligence after she was held at gunpoint while robbers stole her jewelry in 2016.

Kim sued for the amount the insurance company paid her for the stolen items.

Kim Kardashian has settled a $6.1million lawsuit with her former bodyguard accused of failing to protect her during her Paris robbery 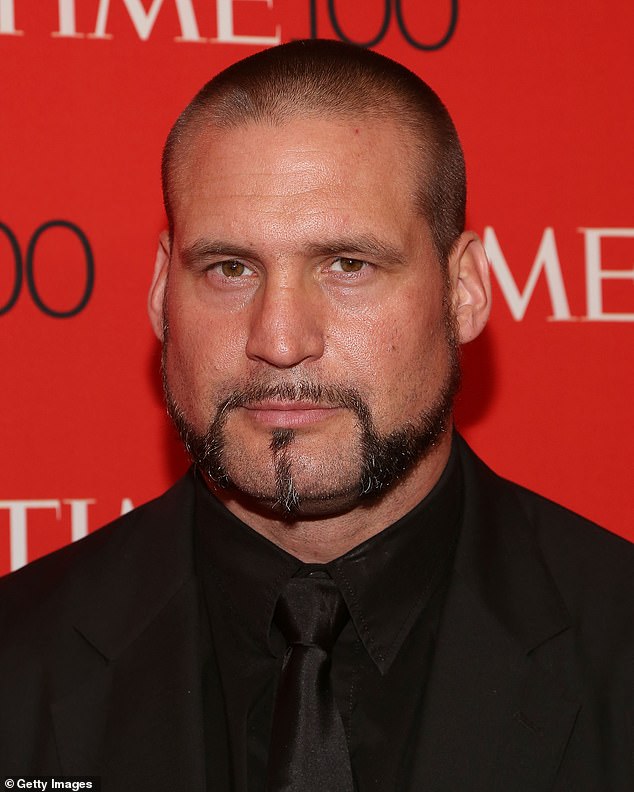 The case dragged on for two years but all parties have now reached a settlement before going to trial, according to The Sun.

Duvier, a German-born judo expert, was also fired by the socialite.

Court documents read: ‘Plaintiff’s Counsel informs the court that the parties have come to a settlement agreement and are waiting on the defendant’s signature to proceed further.’

Duvier, who was represented by Jennifer Thomas, then signed a dismissal notice which was seen by an LA judge.

His company Protect Security had filed for bankruptcy only two weeks before the robbery and he has disappeared off social media this year. 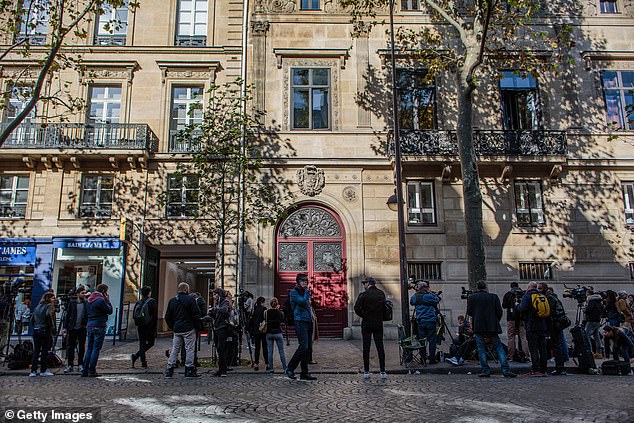 Kardashian had been left alone in the Hotel de Pourtales suite (pictured) while her bodyguard went to a nightclub on the Champs-Elysées with her sisters, Kourtney and Kendall Jenner

The gang of robbers posed as police officers before threatening the concierge of a short-term luxury apartment rental building close to the British Embassy in Paris known as the Hotel de Pourtalès.

Kardashian had been left alone in the suite while her bodyguard went to a nightclub on the Champs-Elysées with her sisters, Kourtney and Kendall Jenner.

Kardashian was tied up and had a gun pointed to her head while she was put in the hotel bathroom as the robbers selected pieces of her diamond jewelry, taking items worth $10million. 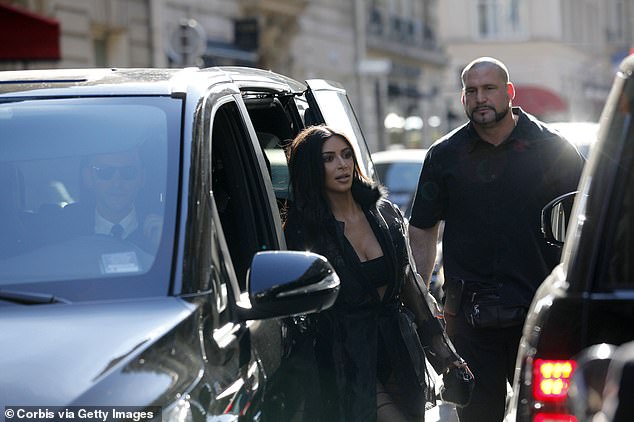 Just a month after the robbery, Kim and her husband Kanye West decided to fire their longtime bodyguard and other members of their security detail (pictured in Paris together in 2016)

While Kardashian was not seriously hurt, she was said to be ‘badly shaken’ and later said she had developed a ‘phobia’ of going out after the robbery.

Aomar Ait Khedache, the alleged mastermind, said Kardashian was an ‘easy target’ because she kept divulging details about her possessions and their whereabouts.

The career criminal, who has served time for previous robberies, is still awaiting trial for the raid, along with 11 other presumed gang members.

Nicknamed ‘Omar the Elder’, Ait Khedache has confessed to his involvement in the Kardashian job but denies prosecution claims that he was the ring-leader.

Just a month after the robbery, Kim and her husband Kanye West decided to fire their longtime bodyguard and other members of their security detail.

Her insurance company AIG also claimed in the 2018 lawsuit that Duvier had failed to report multiple security breaches at the hotel. 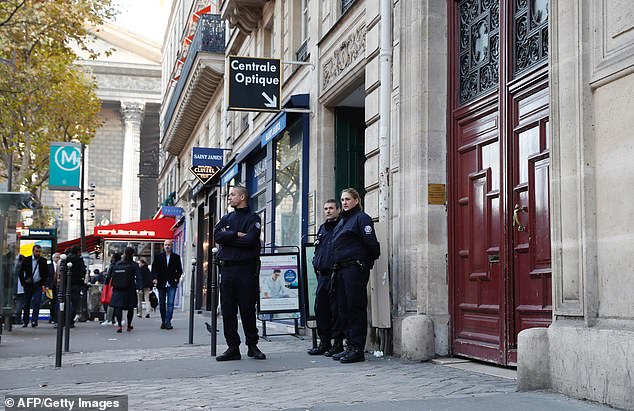 This included a courtyard gate that was missing a lock and a broken door intercom.

The suit claimed that the failure to detect these security breaches and leaving Kim along in her hotel room led to the robbery.

Neither the hotel nor the concierge, who was also held at gunpoint and forced to unlock Kim’s room, were named in the lawsuit.

Colour close-ups of the gang caught on CCTV later emerged – including one of Ait Khedache wheeling a getaway hire bike away.

His DNA was found on plastic cuffs used to tie the victims including Kardashian up, and it was cross-referenced with samples linked to his earlier crimes. 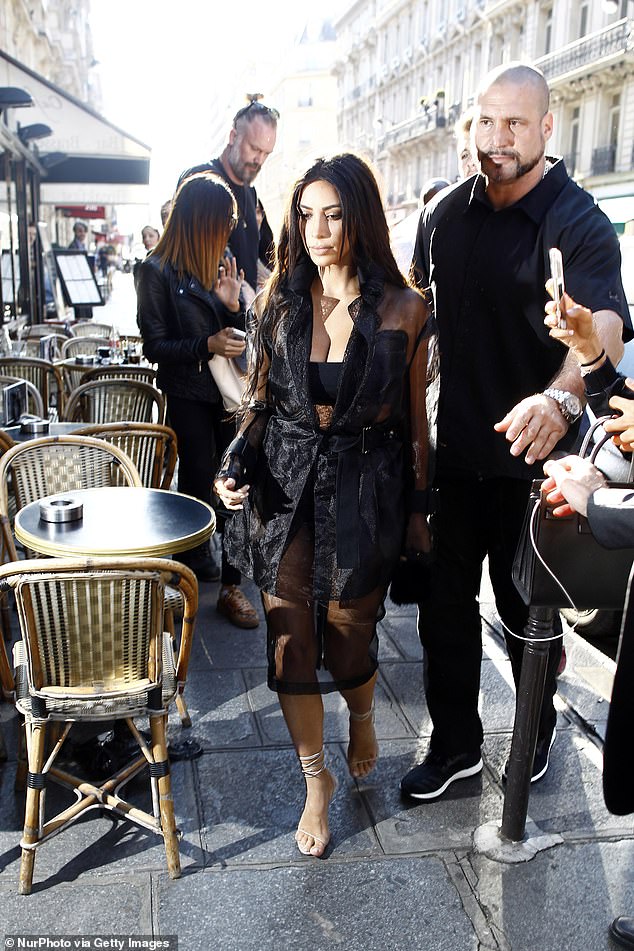 After being identified, police studied CCTV footage in which Khedache was seen getting out of a car near St Lazare station on the night of the Kardashian job.

It was just around the corner from the crime scene, and the driver was his then 29-year-old son, Harminy Ait Khedache.

Khedache junior, now 33, has now been charged with being the getaway driver of the gang.

Ait Khedache has told police the gang melted down and sold off most of the stolen jewellery, but managed to sell Kardashian’s engagement ring, which has never been recovered.

Kardashian briefly fell silent on social media after the heist.

She recently spoke out about the incident during an appearance on My Next Guest Needs No Introduction With David Letterman.

She claimed that a gun was pointed directly at her as thoughts regarding the fate of her sister’s safety flooded her brain.

She explained that, at the time of the robbery, she was only wearing a robe and one of the intruders aggressively ‘grabbed her.’

‘I was like, ‘OK, this is the time I’m gonna get raped. Like deal, this is gonna happen, just prepare yourself,” recalled Kim to Letterman. 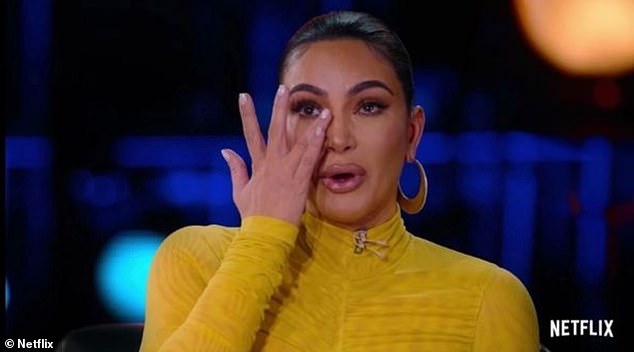 Fear: Kim Kardashian recently opened up about the traumatic robbery and how she feared her older sister Kourtney, 41, would return and ‘find [her] dead’ in their room

‘So, I did and then — I don’t know why I’m crying, I’ve talked about this before — and then he tied me up with handcuffs and zip-ties and then duct tape and duct-taped my mouth and my eyes.’

Thankfully, no one was physically harmed during the course of the robbery, but Kim said the entire experience made her ‘really paranoid’ for a year’s time.

She would have ‘half a dozen’ security guards posted up about her Calabasas home at all times.

Wyoming ranch free from virus fears is rented out for $175,000 a WEEK

Nikki Bella reveals ex John Cena reached out after she gave birth: ‘John and I will be tied forever’

Some aquarium fish are showing signs of depression after two months...