Royal Mint condition! Perfectly preserved £5 banknote dating back to 1863 is set to fetch £12,000 at auction

By Ian Fletcher For Mailonline

For despite being 157 years old, the banknote is in such pristine condition that it is almost as if it had been printed yesterday, according to the auctioneers.

The spectacular Bank of England £5 note dating from 28 December, 1863 is among the highlights of an online/ live auction of British, Irish and World Banknotes at Dix Noonan Webb, the international coins, medals, banknotes and jewellery specialists of London‘s Mayfair, on Wednesday, October 28, on their website www.DNW.co.uk.

This spectacular Bank of England £5 note dating from 28 December, 1863 is among the highlights of an online live auction of British, Irish and World Banknotes at Dix Noonan Webb on Wednesday 28 October

Probably the finest quality early black and white note the cataloguer has ever seen, it is signed by Matthew Marshall and is estimated at £10,000-12,000.

Andrew Pattison Head of Department, Banknotes at Dix Noonan Webb, said: ‘ When it was printed in 1863, this Marshall £5 represented the absolute height of Victorian technology.

‘All of the recent advances in paper making, printing and watermarking, are all clearly visible in this beautiful banknote. In fact, this exact design was used until 1956 – a further 93 years and the fact that it has survived in this condition – almost as if it had been printed yesterday – is miraculous.’ 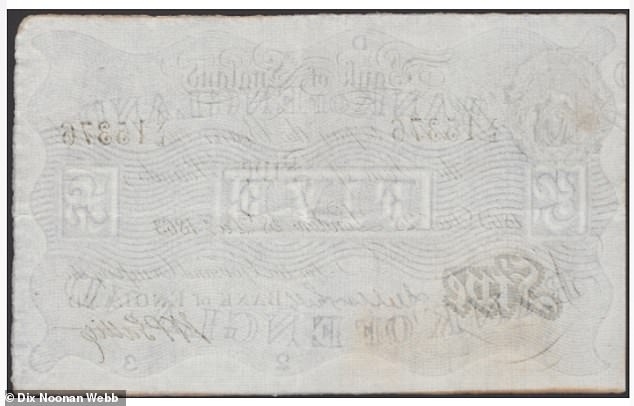 Auctioneers say despite being 157 years old, this banknote is in such pristine condition that it’s almost as if it had been printed yesterday

Another important Bank of England note in the sale is a £1 ‘Gold Note’ dating from 1914, signed by John G. Nairne.

The sale of 1060 banknotes includes examples from all over the world. One of the finest known examples of a Qatar & Dubai 100 Riyal – almost uncirculated and a classic rarity in this kind of condition is estimated at £9,000-12,000, while from the Government of Iraq, an impressive 100 Dinars note from 1936, with a magnificent portrait of King Ghazi is expected to fetch £10,000-15,000.

Jaime King is beautiful in blue patterned top, jeans, and heels as she steps out on LA errand trip