Former Vice President Joe Biden said at Thursday night’s debate he will add a public option as the capstone to Obamacare – which he called ‘Bidencare’ at Thursday’s presidential debate.

Biden made the boast, resurrecting an issue that liberals tried and failed to enact over stiff Republican opposition during the Obama-Biden administration, during a tense fight on stage in Nashville.

‘What I’m going to do is pass Obamacare with a public option, become Bidencare,’ Biden said.

It was one of several times Biden tried to distinguish the plans he says he will push through from how Trump sought to portray his rival: painting the Democrat as being for a ‘socialist’ health plan that would end private insurance.

‘What I’m going to do is pass Obamacare with a public option, become Bidencare,’ former Vice President Joe Biden said at Thursday’s debate

Biden observed that the attack does not comport with what happened in the Democratic primaries, where he that he captured his party’s nomination after beating back opponents who called for a single-payer government-run plan.

Trump went on the offensive on health care after moderator Kristen Welker turned to the issue following angry clashes where Trump accused Biden of ‘corruption.’ 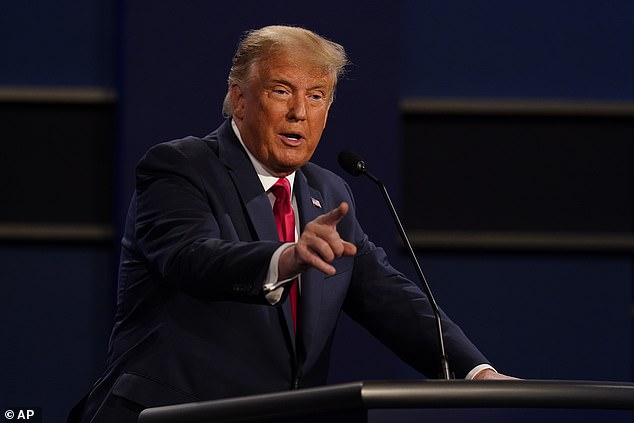 Donald Trump said he would ‘terminate’ the Affordable Care Act, and tried to tar his rival with being for ‘socialized medicine.’ Biden said he would preserve private plans 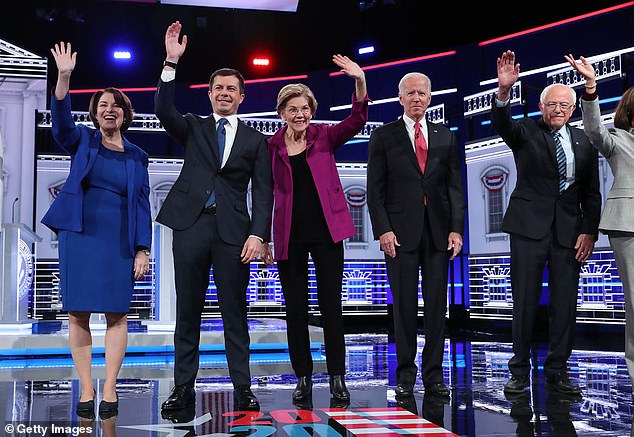 Trump has been under pressure for saying for more than a year that he would produce a health plan but failing to do so. He has said it will come out after the Supreme Court takes up a case on Obamacare.

‘We have done an incredible job on health care, and we will do even better,’ he said, having succeeded in knocking out the individual mandate that people get insurance, but failing to take down the Affordable Care Act.

Trump said of his own plan: ‘But it no longer is Obamacare because without the individual mandate it’s much different.’

‘I’d like to terminate Obamcare, come up with a brand new, beautiful health care,’ Trump said.

He said Democrats would face ‘tremendous pressure’ to pass it, and said he thought Republicans might even gain control of the House – even as experts are saying Democrats could gain as many as 10 setas.

‘What we’d like to do is terminate it. We’d have the individual mandate done. I don’t know that it’s going to work,’ he said.

Trump tried to identify Biden with ‘socialized medicine,’ forcing Biden to point out that he championed continued private insurance during the Democratic primaries.

‘Joe Biden is going to terminate all of those policies,’ Trump said – playing to polls that show most Americans with private insurance want to keep their plans.

‘Not one single person with private insurance would lose their insurance under my plan nor would they under Obamacare,’ countered Biden. He said he would add a ‘public option’ that Congress couldn’t clear under Obama.

He said Trump ‘wants to take away’ people’s policies and pointed to 10 million who have lost private insurance under the Trump administration.

‘All the people from COVID are going to have preexisting conditions. What are they going to do?’ Biden said, with more than 8 million infections in the country – the most recorded in any country in the world.

‘The fact that there’s a public option and people can chose, that makes it socialist?’ Biden asked. ‘This is something that’s going to save people’s lives.’

Trump claimed Biden ‘didn’t do anything’ in his 47 years ­in government – although he was there for enactment of Obamacare and was a key advisor in securing legislative votes on key measures.

During crosstalk, Trump unexpectedly took time to compliment Welker. ‘I respect very much so far the way you’re handling this,’ he told her.

But the attacks resumed. ‘He keeps talking about it – he hasn’t done a thing for anybody,’ said Biden of his rival.

Then Biden pointed out that he beat back challenges from people like Vermont Sen. Bernie Sanders.

Georgia mom-of-two, 27, who went missing in July found dead in her car, family...

Police will not punish arrivals for flouting quarantine