The battle for our children’s futures: More than 100,000 people sign teaching union petition to CLOSE schools – but Michael Gove says they will stay open the government is willing to EXTEND lockdown for the cause

By Josh White and Liz Hull for the Daily Mail

A fight to keep classrooms open during lockdown was brewing last night after the biggest teaching union launched a campaign to shut them.

Michael Gove said it was so important to keep schools open that Whitehall was willing to extend the national lockdown for the cause.

But the National Education Union, which represents more than 450,000 teachers, is gaining increasing support.

Michael Gove said it was so important to keep schools open that Whitehall was willing to extend the national lockdown for the cause. Pictured: Students of Manchester Metropolitan University 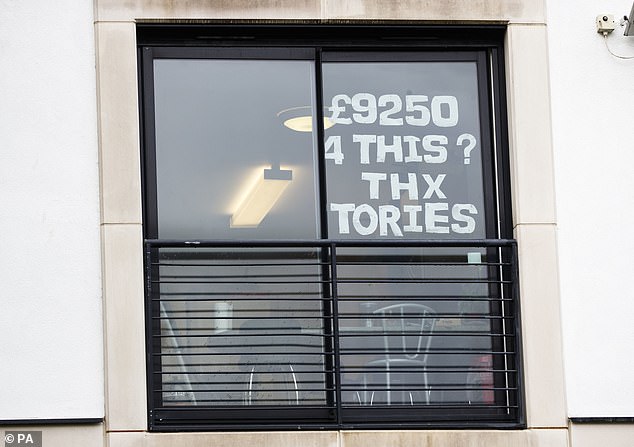 But the National Education Union, which represents more than 450,000 teachers, is gaining increasing support. Pictured: Student accommodation at the University of Sheffield

Universities are bracing for uproar after the Government advised them to ‘consider’ stopping all face-to-face teaching – but banned students from returning home early.

Vice-chancellors have warned that looking after locked-down students during outbreaks is like ‘supervising jails’. But Boris Johnson said on Saturday that universities will all remain open.

Cabinet Office guidance published in the wake of his announcement said they should ‘consider moving to increased levels of online learning where possible’.

It also stipulated: ‘If you live at university, you must not move back and forward between your permanent home and student home during term time. You should only return home at the end of term for Christmas.’

The Department for Education has so far failed to publish plans on how students are supposed to go home for the holidays without potentially spreading the virus.

The new lockdown has thrown fresh doubt on their rumoured preference for the end of term, in which in-person teaching would end on December 8, followed by students going into isolation for two weeks.

Dr Jo Grady, leader of lecturers’ union the UCU, said the lockdown was a ‘complete half-measure’ and the health of students and staff was ‘being put at risk’.

She said there had to be a ‘safe and managed, flexible route home for students who want to leave when it is safe to do so’ amid fears they may rush back ahead of Thursday’s travel ban.

The vast majority of universities have had confirmed coronavirus cases and significant outbreaks have been occurring across campuses for months.

Students have protested at being ‘imprisoned’ in halls. Around 1,500 Manchester Metropolitan students were locked down in September after 500 tested positive.

One vice-chancellor said: ‘We have all been watching with something approaching horror the way in which Manchester Metropolitan found themselves essentially supervising a jail for those students.’

The Department for Education has been contacted for comment.

The union’s campaign has already won the backing of senior Labour figures, while their petition to ‘put schools in lockdown’ gathered more than 100,000 signatures within hours of the Prime Minister’s speech on Saturday night.

Cabinet Office minister Mr Gove told the BBC’s Andrew Marr Show: ‘I do believe that we want to keep schools open and I believe that the measures that we are putting in place will enable us to do so.’

Molly Kingsley, co-founder of parents’ group Us For Them, said: ‘It is crucial that schools are kept open as normally as possible.

‘If this was really about health issues, then why weren’t the unions calling for closures weeks ago?… It’s really hard to believe that any teacher would want to deny education to children at this crucial moment.’

Next summer’s GCSEs and A-levels have been also thrown into fresh doubt, with heads saying a planned three-week delay was now a ‘wholly inadequate solution’.

The Government insists schools and universities will be exempt from the shutdown so learners can ‘keep progressing towards exams and the next stage of education or employment’.

But the Department for Education has still not published its contingency plans around exams after this year’s grading chaos, or issued any new guidance to schools on the latest lockdown.

Nor is there detail on extra testing provision for staff or pupils, beyond Boris Johnson’s promise on Saturday for ‘rapid turnaround tests’ that will be rolled out in ‘a matter of days’.

NEU leader Kevin Courtney said that by not including schools, the lockdown was ‘another half-measure’, and was ‘unlikely to have the effect that the Prime Minister wants’.

His union also wants rotas to be introduced after lockdown, with older pupils taking it in turn to learn from home.

Labour leader Sir Keir Starmer yesterday told Andrew Marr that the lockdown should have coincided with half term.

He agreed schools must stay open, but was publicly contradicted by Greater Manchester Mayor Andy Burnham, among others.

Mr Burnham said he supported a school shutdown to ‘create the conditions for the biggest drop in cases that we could achieve’.

Scientists have warned that the lockdown may have to be lengthened if schools stay open.

Former chief scientific adviser Sir Mark Walport told Sky’s Sophy Ridge on Sunday the virus was ‘unlikely this time to come down quite as fast as it did during the first lockdown because we have got schools open’.

And while not backing out-and-out closure, other major education unions also raised grave concerns about the Government’s plans.

A Department for Education spokesman said: ‘We are prioritising children’s and young people’s education and wellbeing… evidence has highlighted the risks of not being in education on their development and mental health.’

European governments are ‘well behind’ in the fight against coronavirus, senior WHO figure says

Plastic surgery is a betrayal of the sisterhood, says Barbara Dickson

Amelia Hamlin masks up as she and beau Mercer Wiederhorn step...