It was another grim day for Rolls-Royce investors – and staff – as shares tumbled and its mass job-cutting programme gathered pace.

The engineering giant said it would cut almost 1,400 jobs in its civil aerospace division, its hardest-hit arm which makes and maintains plane engines.

Around 950 will be in the UK, while 420 will be overseas but it has not said which sites will bear the brunt of the latest cuts.

Shares crash: Rolls-Royce said it would cut almost 1,400 jobs in its civil aerospace division, its hardest-hit arm which makes and maintains plane engines

All are part of an existing programme to slash 9,000 roles from its 52,000-strong workforce.

But it was a tough reminder that as well as shoring up its finances through the likes of bond sales and share issues, many staff will also suffer.

Rolls, long the jewel in the UK’s engineering crown, has gone so far as to offer every UK civil aerospace employee – an estimated 15,700 people – voluntary redundancy in a bid to reach 950.

There was also cause for concern among investors, including Irish private equity group Causeway Capital, which stock market filings show has upped its stake from 7.1pc to 8.4 per cent. Rolls shares fell 11.2 per cent, or 9.38p, to 74.52p. 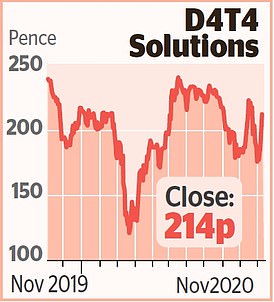 Shares in the technology group D4T4 Solutions surged yesterday after it picked up four contracts.

The company, which helps firms collect and analyse data on consumer behaviour, estimates the deals will bring in an extra £5.5m in revenues this year.

The new contracts include extensions with an unnamed American ‘financial services organisation’ and with a car manufacturer.

The blue-chip index was boosted by a 46 per cent rally at insurer RSA, which advanced 210.3p to 670p after it received a takeover offer.

On Wall Street, the Dow Jones, Nasdaq and S&P 500 all rose between 2 per cent and 2.5 per cent as Joe Biden appeared to be edging to victory in the US election.

Back on this side of the pond, much of the day’s corporate news was dominated by one of the periodic results super-Thursdays, when a slew of companies release quarterly or half-year figures.

Car sales platform Auto Trader made gains despite reporting that half-year revenue fell by 37 per cent to £118million.

It has decided to hold off on any dividend payments and will suspend advertising fees to customers during the latest lockdown, as it did in the spring. It rose by 1.1 per cent, or 6.4p, to 600.8p.

Fellow blue-chip group Aveva, on the other hand, was not quite so lucky. It specialises in making software for engineering and industrial clients – but they have been hit by the pandemic.

Among retailers, investors were wary of sofa seller DFS Furniture (down 2.5 per cent, or 5p, to 198p), which said the latest restrictions closing its 169 showrooms in England were not expected to ‘materially impact’ half-year profits.

Website sales, it added, are still ticking along nicely. The market was far keener on budget stationery retailer The Works, despite it warning that sales will take a knock from the closures.

The chain is crossing its fingers that sales will pick up again when stores reopen in December.

Investors were buoyed by better-than-hoped-for sales figures, which fell 7 per cent in the 26 weeks to October 25 when including seven straight weeks of lockdown closures.

Shares in the group, whose jigsaws, board games and arts and craft materials have been highly sought after, rose 31 per cent, or 5.2p, to 22p.

Hungarian low-cost airline Wizz Air swung to a £186million loss in the six months to September.

Passenger numbers dived 70 per cent compared with the year before but, with a hefty cash pile, it is planning to open even more new routes.

He is the former finance chief of British Airways owner IAG.

Black Friday WEEK is here! Retailers unveil even more deals ahead of the main event

Tree surgeons show off their bare trunks as they pose for...

Coronavirus housing market freeze to cost Treasury more than half its...