An investigation by the equality watchdog has found no unlawful acts of pay discrimination by the BBC.

But the Equality and Human Rights Commission recommended improvements to rebuild trust with female employees and improve transparency.

Its report said the BBC accepts its historical practices were not fit for purpose and has made significant changes since 2015.

It found inadequate record-keeping on how decisions about pay were made, leading to confusion and poor communication with women making complaints.

Equality and Human Rights Commission interim chair Caroline Waters said: ‘It is easy to see why trust between some women at the BBC and the organisation has broken down.

‘Many women felt their voices were not being heard and have been left feeling confused as to how decisions about their pay have been made.

‘This took a heavy emotional toll on those involved in the process and the strength of feeling of women at the BBC should not be understated.

‘While we have not found any unlawful acts in our investigation, repairing the damage caused by these issues requires continued leadership and we hope the BBC board takes forward our recommendations.’

The commission launched an investigation into equal pay at the BBC in March last year.

The watchdog said it suspected that some female BBC employees ‘have not received equal pay for equal work’.

It examined whether men and women are paid the same salary for the same job, saying it has ‘been a legal requirement for almost 50 years’.

The investigation looked at the period from January 1 2016, covering formal and informal pay complaints.

The BBC says it has since gone ‘through a period of significant reform’ in recent years.

Its new director general Tim Davie recently told MPs that there were 20 gender discrimination cases outstanding at the BBC.

In response to the report, Mr Davie, said: ‘We have to work even harder to be best in class.

‘Trust is vitally important and as an organisation that serves the public, the BBC must continue to lead the way on pay transparency and fairness.

‘We are committed to building a truly inclusive culture.

‘We agree with the Commission that we should continue to deliver on our reform programme which began in 2015. We accept every one of their recommendations and will implement them.’ 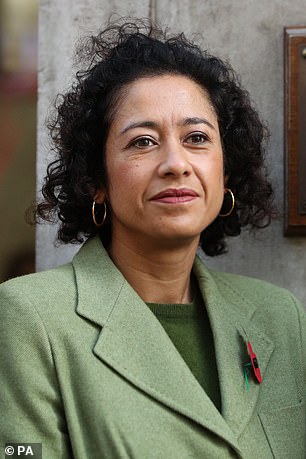 In January, Newswatch presenter Samira Ahmed won a sex discrimination equal pay claim against the BBC after arguing that Jeremy Vine was being paid six times her salary for very similar work on Points of View.

In 2019, radio presenter Sarah Montague won a £400,000 settlement and an apology from the broadcaster over unequal treatment in relation to her pay for work on the World at One programme.

Carrie Gracie resigned from her position as China editor in 2018 in protest at pay inequalities at the broadcaster.

She was eventually given a full apology by the corporation and received back pay, which she donated to a women’s equality charity.

The furore was sparked when the organisation published, in 2017, the salaries of its highest earners.

The list revealed that only two of the top 14 employees were women while men made up two thirds of the overall list.

Fiona Bruce, Vanessa Feltz and Lauren Laverne are also in the top 10.

SUSANNA REID: Washed up by 50? Nonsense! TV’s never been better for women like me

Is it the end of free banking in Britain? This is Money podcast

Luke Wilson, 48, proves he’s still a Hollywood heartthrob as he towels himself down

Woman loses both her parents to Covid who died from virus...