Alison Hammond has seemingly had her say on the ongoing This Morning team drama.

The ITV presenter, 45, shared a telling message on Instagram on Thursday, telling her followers ‘strong people don’t tear down others’.

The post comes just days after her This Morning co-star Ruth Langsford, 60, denied making a dig at Alison, after it was revealed the former Big Brother star will replace her on the flagship daytime show.

Alison and Dermot O’Leary will replace long-term This Morning stars Ruth and her husband Eamonn Holmes, 60, on Friday mornings, with the shock shake-up receiving a mixed reaction.

Speaking out: Alison Hammond has seemingly had her say on the ongoing This Morning team drama, sharing a telling message on Instagram on Thursday

Amid the ongoing drama, Alison posted a cartoon picture of a girl and a dolphin rising to the surface of the ocean together, with the words: ‘Strong people don’t put others down. They lift them up.’

The post received an outpouring of love from Alison’s followers and her celebrity pals, with Martine McCutcheon commenting: ‘Yes. 100 percent.’

This Morning’s resident medic, Dr Zoe Williams commented with a heart and 100% emojis.

Earlier this week, Ruth denied that her comments were ‘directed at anyone in particular’ after criticising reality stars and their rise to fame in a recently resurfaced interview. 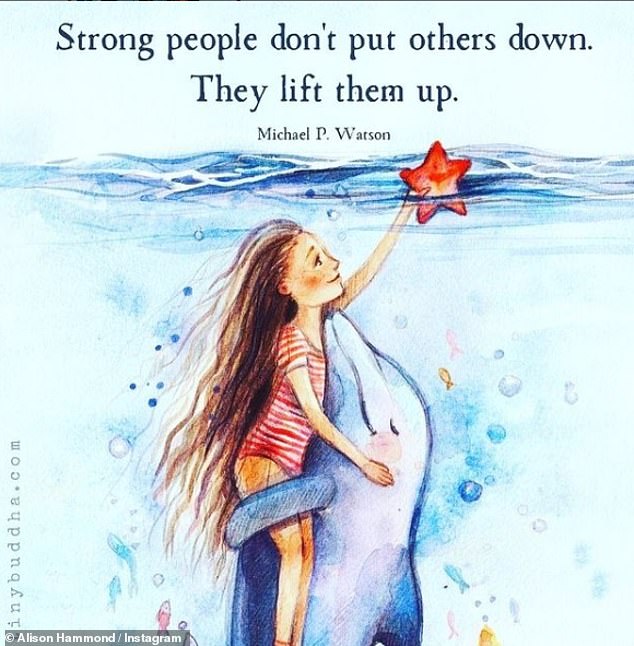 ITV shakeup: Amid the ongoing This Morning drama, Alison posted a picture of a girl and a dolphin, with the words: ‘Strong people don’t put others down’

The TV host’s comments came before it was revealed that she would be replaced on This Morning by Alison, an ex Big Brother contestant, in the huge shake-up by ITV bosses.

Ruth previously said that she and her husband, 60, had ‘put the work in’ to get into their positions and didn’t ‘do a reality show’ and ‘get an overnight job’.

Before the new hosting line-up was revealed earlier this month, she told The Sunday Mirror’s Notebook Magazine: ‘We’ve put the work in. 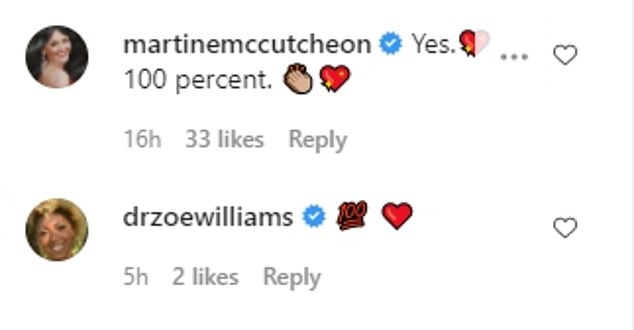 Support: The post received an outpouring of love from Alison’s followers and her celeb pals, with Martine McCutcheon commenting: ‘Yes. 100 percent’

‘We didn’t do a reality show and get an overnight job on the telly. We’ve come up through the ranks.’

But representatives for Ruth have denied that her comments were ‘directed at anyone’ insisting that they had been made as a ‘general observation’.

The spokesperson continued: ‘The comments from Ruth were made as a general observation in an interview conducted more than six weeks ago, about the industry and different routes into the business.

‘Ruth was simply illustrating a point that whereas some presenters launch their careers by being on other TV programmes first, her and Eamonn’s experience and career paths had taken a different and more traditional path. 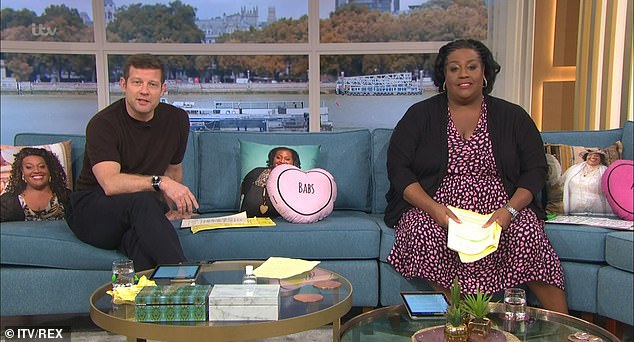 ‘This wasn’t directed at anyone in particular – indeed she has always been supportive of a number of her professional colleagues and friends who have taken this route.’

Earlier this month, it was reported that the married couple had been dropped from the ITV chat show after both presenting the hit Friday morning slot for 14 years.

But the duo will continue to host the ITV show from Monday to Thursday during the schools’ six-week summer holiday.

Fan-favourite Alison, and Dermot, 47, impressed both viewers and ITV bosses when they covered for main hosts Holly Willoughby and Phillip Schofield in the summer.

News of the This Morning line-up comes just five months after This Morning editor Martin Frizell told staff that he was planning to hire a black presenter. 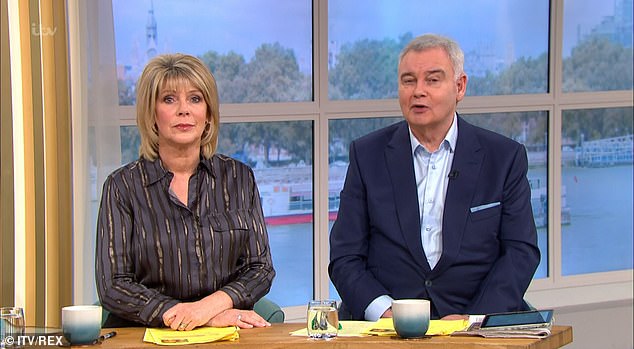 Denial: Earlier this week Ruth denied that her comments were ‘directed at anyone in particular’ after criticising reality stars and their rise to fame

During a video conference with staff in June, he said: ‘There is not a black presenter on any of the programmes today. We plan to change that, we [This Morning] are looking into that.’

But Eamonn and Ruth were said to be ‘disappointed and devastated’ by the big news, as they have ‘loved’ their stint presenting on This Morning.

Earlier this month, a This Morning source said: ‘Ruth and Eamonn have been part of the show for 14 years and being told they are no longer wanted has been very sad and disappointing for them.

‘They love it and the viewers love them, but times are changing on the show and they have been the victims.’

Eammon and Ruth have been assured that they remain ‘part of the This Morning family’ and will likely be asked to cover when other presenters are on holiday.

Why are doctors STILL failing to tell patients they may never be able to give up antidepressants?

What a find! Letter by palaeontologist Mary Anning fetches £100,000 at auction

Caprice, 48, poses topless with bedding draped around herself before slipping on a lace...

The Cambridges get a new spaniel puppy from her brother James...

Why are doctors STILL failing to tell patients they may never...

WHAT BOOK would former Bishop of Edinburgh and author Richard Holloway...