And Tom Parker’s wife Kelsey shared a series of adorable new snaps of their baby boy with his sister Aurelia on her Instagram page on Thursday.

The actress and vlogger, 30, posted a sweet video of Aurelia waving at the camera as she cuddled her little brother while both sitting in a cot.

How sweet! Tom Parker’s wife Kelsey shared a series of adorable new snaps of their baby boy with his sister Aurelia on her Instagram page on Thursday

The adorable tot flashed a beaming smile in the video which was captioned by Kelsey: ‘I just can’t cope with how funny she is. Forever loving my little Rae of sunshine who makes my day every day ❤️ @aureliaroseparker @bodhithomasparker.’

After stealing the show in the heartwarming clip, Aurelia then looked down adoringly at her new little brother Bodhi as he lay in her arms.

On an Instagram page made for Bodhi following his birth, Kelsey also shared a photograph of her son lying on her chest.

She captioned the image: ‘Does any thing in this world beat cuddles with your parents? Having a snuggle with my mummy.’ 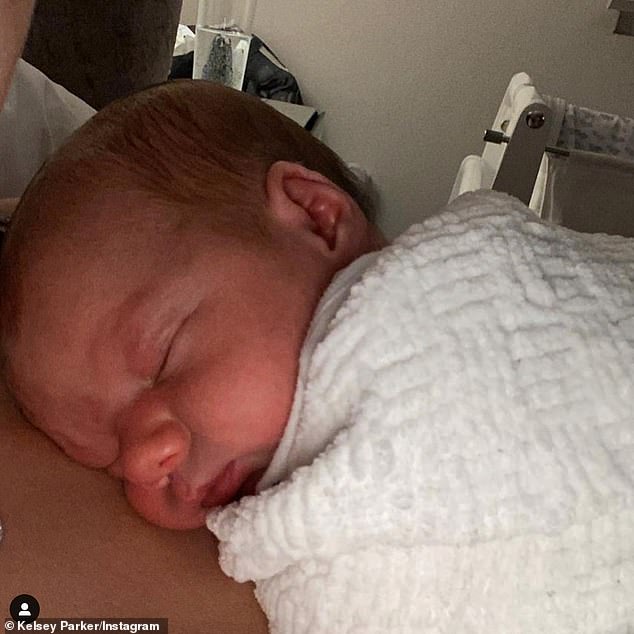 Mummy cuddles: On an Instagram page made for Bodhi following his birth, Kelsey also shared a photograph of her son lying on her chest 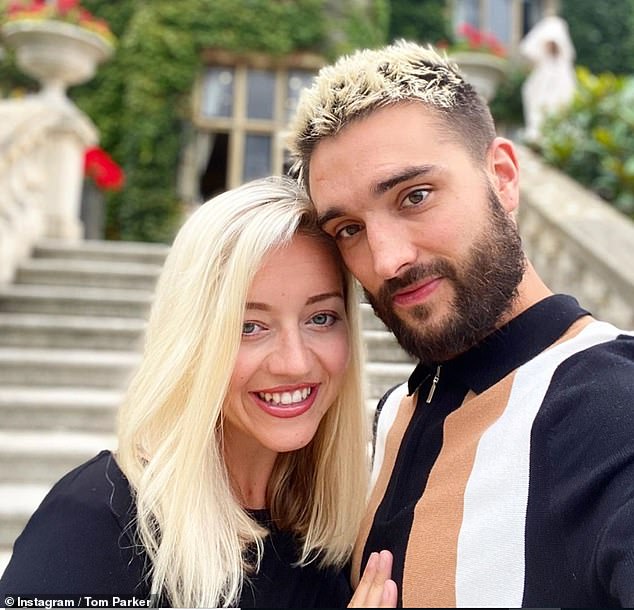 Other snippets included a video of Bodhi in a white babygrow while lying in his crib staring up at an animal mobile.

While he was later shared wearing a batman outfit with the words ‘my little superhero’ written across the front of the garment.

Kelsey recently admitted she ‘forgot she was pregnant’ when she learned the singer had been diagnosed with a terminal and inoperable brain tumour. 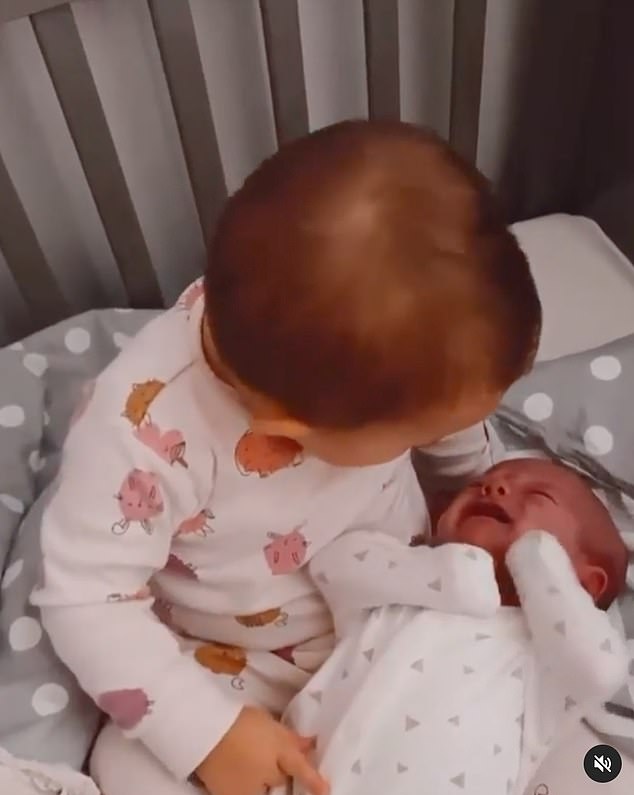 Sibling love: After stealing the show in the heartwarming clip, Aurelia then looked down adoringly at her new little brother Bodhi as he lay in her arms

The mother-of-two told the Loose Women panel that she learned about Tom’s diagnosis when she was 35 weeks pregnant with her son Bodhi, and her sole focus at the time was figuring out how to move forward with the devastating prognosis.

Last month Tom revealed he’d been diagnosed with a terminal brain tumour, and despite the sad news he and Kelsey have vowed to fight and raise awareness for the disease. 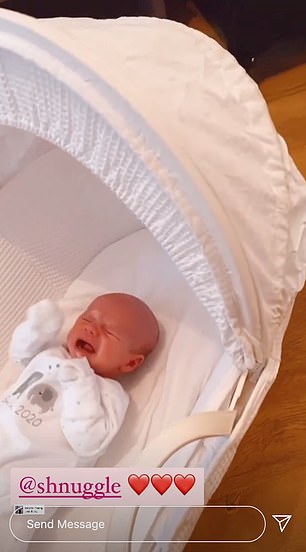 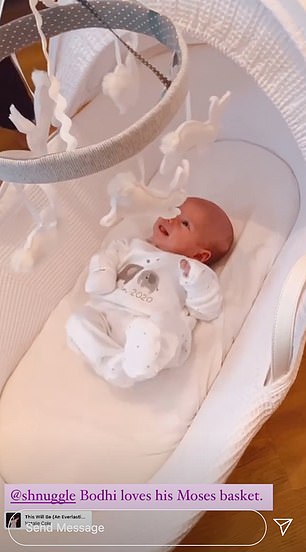 Cute! Other snippets included a video of Bodhi in a white babygrow while lying in his crib staring up at an animal mobile

Since Tom announced his brain tumour diagnosis, he and Kelsey, who are also parents to daughter Aurelia, 16 months, have welcomed their baby son.

She explained that they chose the name as a symbol of hope that Tom can fight his diagnosis.

Fighting back tears as she watched an Instagram clip of her two children, Kelsey said: ‘Bodhi means enlightenment and I just think with this situation he’s going to be the light at the end of our tunnel.’

Kelsey also reflected on the moment she saw Tom suffer a seizure in July, weeks before his tumour was finally diagnosed.

She said: ‘We believe Tom had a seizure in July, but I wasn’t actually around, he rang me and said ”I really don’t feel well Kels” and for six weeks we didn’t know he’d had a seizure. 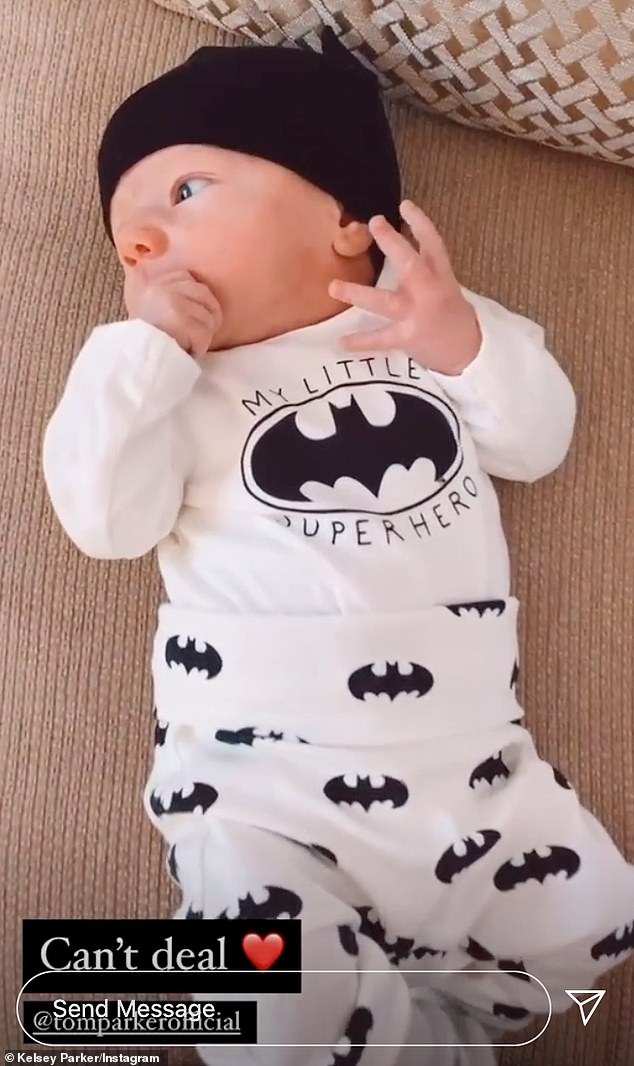 Super baby: While he was later shared wearing a batman outfit with the words ‘my little superhero’ written across the front of the garment

‘We went on holiday, me and my daughter were talking, Tom was in bed he said ‘I feel really hot my hands were shaking” and then he had a seizure. It was traumatic for everyone.’

She also admitted that she pushed for Tom to publicly reveal his health battle to raise awareness, and has been overwhelmed with the support they’ve received.

‘As a family it was a process to go public with it. From day dot I wanted to go public wit hit, for me a problem shared is a problem halved, and since going public, the amount of support we’ve received as said it all,’ she said.

‘Our lives are in the public eye for us as a family it was the best thing but don’t get wrong it was a really hard decision to make.’ 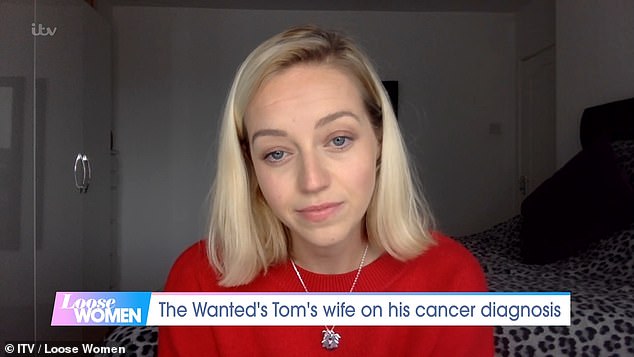 Difficult: Kelsey recently admitted she ‘forgot she was pregnant’ when she learned the singer had been diagnosed with a terminal and inoperable brain tumour

She added that Tom’s difficult ordeal has also helped him reconnect with his bandmates from The Wanted, as they’ve been in constant touch offering their support.

Kelsey told the panel: ‘The four boys have been absolutely amazing. He speaks to them every week.

‘Steve lives in America but he’s always calling. It’s been really good for him to reconnect as well through this.’ 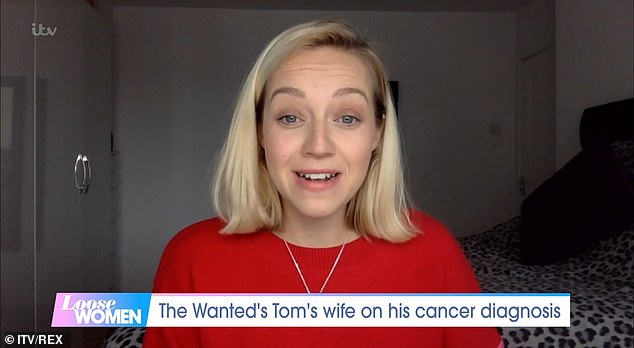 Scary: Speaking on Loose Women, Kelsey said she and Tom first noticed something was wrong when he suffered a seizure in July

The Loose Women panel were quick to praise Kelsey for her maintaining a positive outlook amid Tom’s tumour battle, after she revealed they decided against learning his life expectancy.

She explained: ‘For my kids. for Tom, for my family I think in this situation it’s a really and horrendous situation, but I think staying positive is the only way to get through this.

‘I am a super positive person and that’s what so hard is in the situation, cos people are looking at me going ”how on earth does she get out of bed in the morning?” but it’s the only way to get through this. 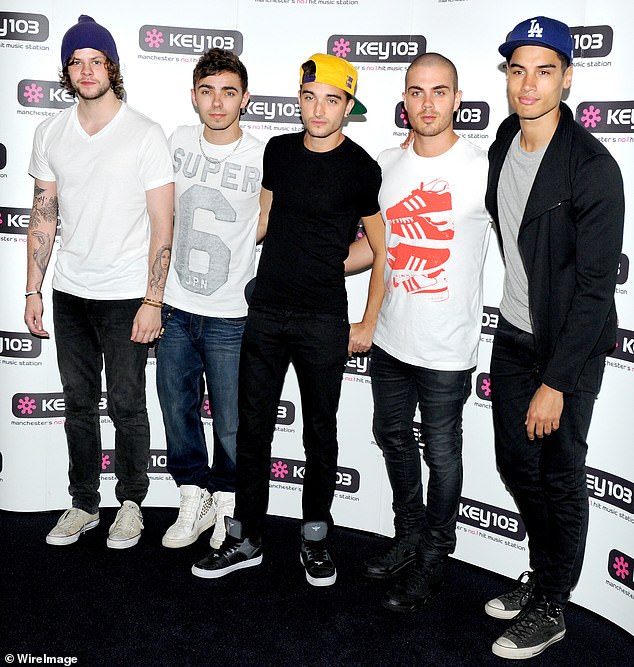 They go way back: She added that Tom’s difficult ordeal has also helped him reconnect with his bandmates from The Wanted (pictured in 2013)

‘I always talk about positive energy and with this situation it’s the only thing that can get me through each day.’

‘I’ve got an amazing family who live round the corner, I have had days where I’ve had to call my mum and say ”can you come and pick my daughter up?” I’m just sat on the sofa crying.

‘But I have to get out of bed, make sure Tom gets to chemo takes his medication.’

Kelsey added that Tom’s currently on a break between his first and second rounds of chemotherapy treatment, and while he’s still going to physiotherapy daily she’s put him on a strict diet to help boost his chances. 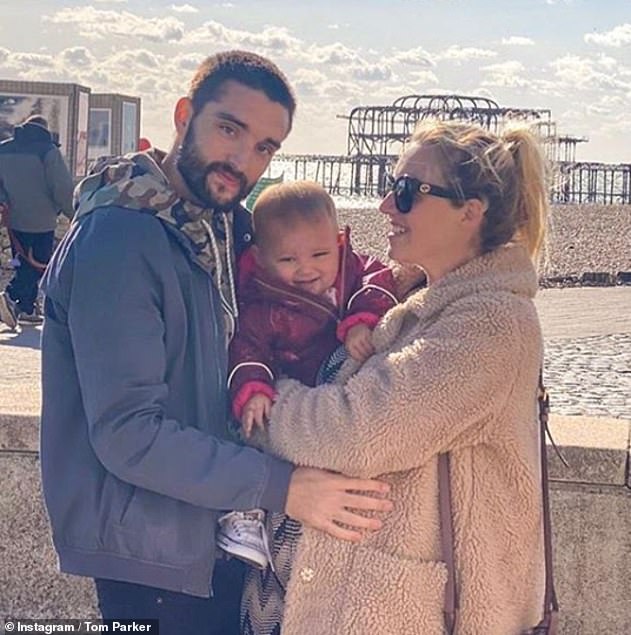 ‘We are going to beat this’: In an emotional statement last month, Tom revealed he has grade four glioblastoma

Tom recently said he and Kelsey had planned to share the birth of their second child with OK! Magazine, but missed the opportunity due to bandmate Max George’s blunder, when he let slip the news during an interview on Lorraine.

The All Time Low hitmaker and the actress said: ‘We were going, ”You k**bhead!” I texted him saying, ”You’ve got a big mouth!”’

The parents-of-two expressed their delight at growing their family as they added to the publication: ‘He is the perfect baby – especially compared to having Aurelia first. I barely even know I’ve got him.

‘He’s so chilled. He’s so different to Aurelia – she was always very active. Bodhi means enlightenment. So it just goes perfectly with our situation right now. He’s the light at the end of our tunnel.’

On October 12, Tom announced he has grade four glioblastoma, with the Bolton native undergoing radiotherapy and chemotherapy treatment in a bid to prolong his life.

Life expectancy for this illness ranges from three months to 18 months after diagnosis, but the couple have not asked to hear Tom’s prognosis amid fears he would ‘sit and count down the days and not live his life’.

The Grease star and the vlogger announced they were expecting their second child in June this year. 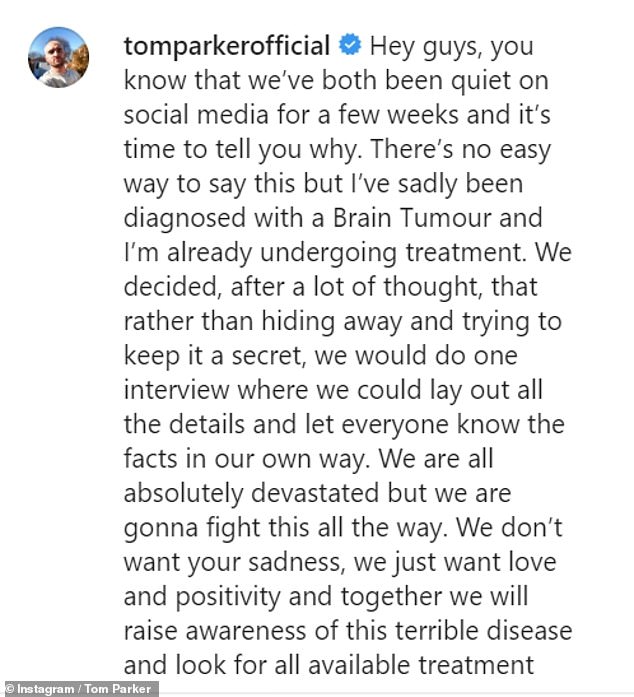 Determined: At the time he said he was undergoing treatment, and would do everything he could to fight the disease

It’s the Hyacinth Bucket effect! A third of people change their voice when they speak on the phone

Spain sees another rise in coronavirus cases with 5,183 new infections

I’m A Celebrity host Julia Morris hits back at theory that...

Police Taser teenage boy after girl, 15, is stabbed in the...