Union flag optical illusion which illustrates how colour blindness works leaves social media users in awe – so, can YOU see red, white and blue once the green and yellow cross vanishes?

By Hayley Richardson For Mailonline

The BBC Horizon clip, originally broadcast in 1985 and shared to the BBC Archive Twitter and Facebook page this week, features a green, yellow and black version of the Union flag.

In the centre of the flag pattern is a black dot, and the narrator urges viewers to stare at the dot for 20 seconds before the image disappears.

Despite the screen that subsequently appears being blank, most people will see the Union flag in its traditional red, blue and white colours.

The BBC Horizon clip, shared to the BBC Archive Twitter and Facebook page, features a green, yellow and black version of the Union flag. In the centre of the flag pattern is a black dot; the narrator urges viewers to stare at the dot for 20 seconds before the image disappears 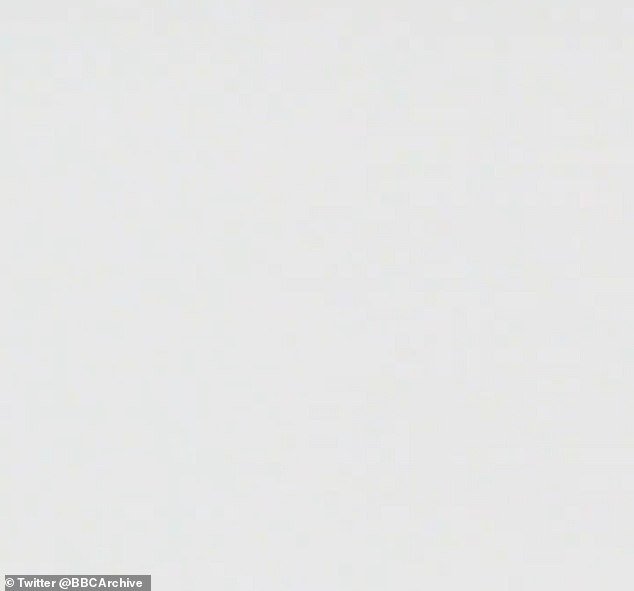 After starring at the dot for 20 seconds, the screen turns to white – so, do you see the red, white and blue Union flag?

The narrator reveals that the illusion can be explained by the simple ‘three receptor theory’.

How does the optical illusion work?

When you stare at the green area of the Union flag image, your green and blue cones get tired out and respond less than normally to the white screen.

However, the red cones work normally, giving a red ‘after image’.

Meanwhile the yellow areas of the flag pattern tire out the red and green cones, leaving blue.

When you stare at the green area of the Union flag image, your green and blue cones get tired and respond less than normally to the white screen when it flashes up.

However the red cones, which were not in use, work normally.

This imbalance creates the appearance of the red ‘after’ image.

Meanwhile the yellow areas of the flag pattern activate and tire out the red and green cones.

When the image flashes ‘white’ it is only the blue cones working normally, leading this to be the dominate colour we perceive.

This mimics the experience of some ‘colour blind’ people who might lack cones sensitive to one of these three colours. This leads to a different version of the colour being seen.

The video goes on to explain that the term colour blindness is ‘misleading’, using the example of a man who has some colour vision but confuses certain colours with others.

The narrator states that we ‘can never know the actual colours they experience, but can get an idea of the range of sensations because we know which colours look identical to them’.

Using an example of a London Underground map, the narrator explains that those with no cones sensitive to green light see a smaller range of colours on the map.

For example, the green District Line becomes a grey shade not dissimilar to the Jubilee Line.

Someone who lacks the cones most sensitive to red may see the red Central Line as black, like the Northern Line, while the Metropolitan and Victoria lines are also confusingly similar. 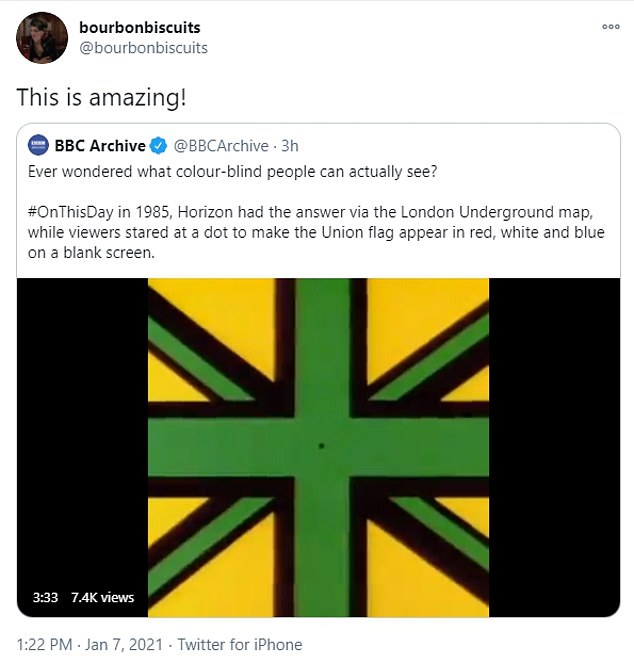 The nostalgic clip caused a stir on Twitter, with one user commenting: ‘That Union Jack trick still freaks me out to this day!’

And a person who lacks cones most sensitive to the blue part of spectrum, which is more rare, will see the mauve and brown of the Metropolitan and Bakerloo Lines appear as very similar colours.

The nostalgic clip caused a stir on Twitter, with one user commenting: ‘That Union Jack trick still freaks me out to this day!’

Another tweeted: ‘I don’t understand this but I’ve just watched three times in a row and I like it!’

WHAT IS COLOUR BLINDNESS?

Approximately one in 20 people suffer from colour blindness, a condition that makes the world a duller place to look at.

There are four kinds of colour blindness known as protanopia, dueteranopia, tritanopia and achromatopsia.

Protanopia involves defective or absent long-wavelength cones in the retina; these photoreceptor cones are responsible for the perception of red light. Protans find it difficult to distinguish between red and green colours, and also between blue and green.

Deuteranopia is a condition where the green photoreceptor cone is missing from the retina. As a result, it is much harder for deutans to distinguish green from red, as well as some grays, purples and a greenish blue. Along with protanopia this is one of the most common forms of colour blindness.

Tritanopia is a complete lack of the short-wavelength cones in the retina that receive blue light. People with this very rare form of colour blindness confuse light blues with greys, dark purples with black, mid-greens with blues and oranges with reds.

People with total acromatopsia cannot perceive any colours at all and can only observe the world in black and white and shades of gray.

The retina of the eye has two types of light-sensitive cells; rods and cones.

Both are found the layer at the back of your eye which processes images.

Rods work in low light conditions, but cones work in daylight and are responsible for colour. People who have colour blindness have a problem with the cones in their retina.

Jenna Coleman shares behind the scenes snaps from The Serpent fittings

I spent £2.5k on furniture I never received. Can I get a refund?

Kyle Sandilands is treated to not one but FOUR birthday cakes

Jenna Coleman shares behind the scenes snaps from The Serpent fittings

Jackie O cops backlash after saying it should be legal to...

Alexa ‘ghostbot’ could let relatives speak to their dead loved ones