Husband who ‘stabbed, strangled and beat his disability campaigner wife to death was frustrated that she wouldn’t give him divorce’

By Nicole Conner For Mailonline

A man accused of stabbing, strangling and beating his disability campaigner wife to death was frustrated that she wouldn’t give him a divorce.

Raymond Hoadley, 62, is accused of murdering his wife Jackie, 58, two weeks after drawing up a contract which handed him their £1.3m savings if she died.

A jury at Lewes Crown Court in Hove were told the couple built up savings and investments worth £1m over a 25 year marriage and had a £300,000 house in Eastbourne, East Sussex.

Raymond Hoadley, 62, (pictured) is accused of murdering his wife Jackie after drawing up a contract which handed him their £1.3m savings if she died

Hoadley drew up a hand written contract giving him full control of the family fortune if his wife died before her body was found at the family home on July 5 last year.

The couple adopted two severely disabled children and Jackie was a respected campaigner for families dealing with complex issues.

They were also both directors of another £300,000 fund set up with a criminal injury payout for their adopted daughter.

Mrs Hoadley was found in the bedroom with seven stab wounds to the face and neck. Her carotid artery and jugular vein had been severed.

Defensive wounds to her arms showed she tried to fight off her attacker. 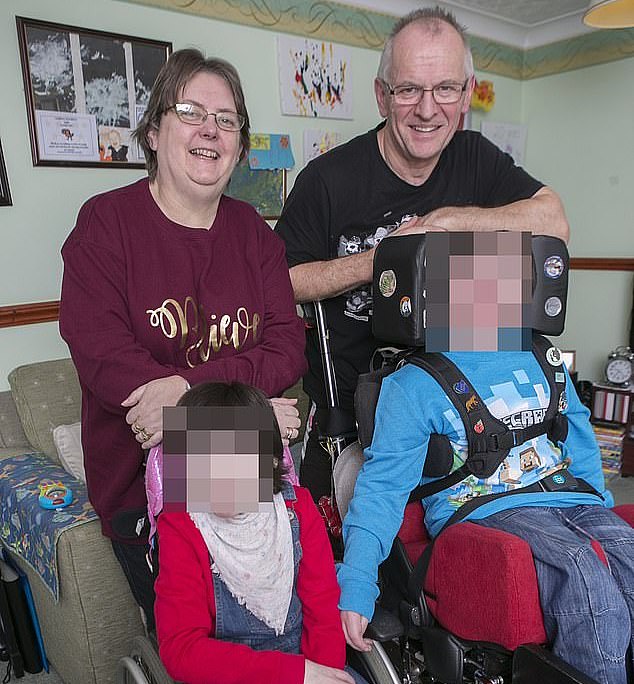 Hoadley drew up a contract giving him full control of the family fortune if his wife died, before her body was found at home on July 5 last year (pictured together with their children)

Matthew was in residential care with Chailey Heritage School near Lewes when his mother was murdered.

Eleanor, who cannot walk and is blind, was in the next room.

Hoadley had told a family friend he wanted a divorce and a settlement, the jury were told.

Carol Bentley was a friend of Mr and Mrs Hoadley and she told the court how the husband was overly cautious about spending money.

She said he even refused to pay for his own mental health counselling.

Mrs Bentley spoke with Hoadley three weeks before his wife was murdered.

She said: ‘He said he wanted to sort out a divorce and the money. He said she wasn’t entering into that sort of conversation.

‘She didn’t want to discuss it. He had some degree of frustration. I said give her time. He didn’t respond.

Mrs Bentley said he was frustrated as the majority of their money was in his wife’s name or joint accounts.

He had moved out of the family home and was living in a bedsit. 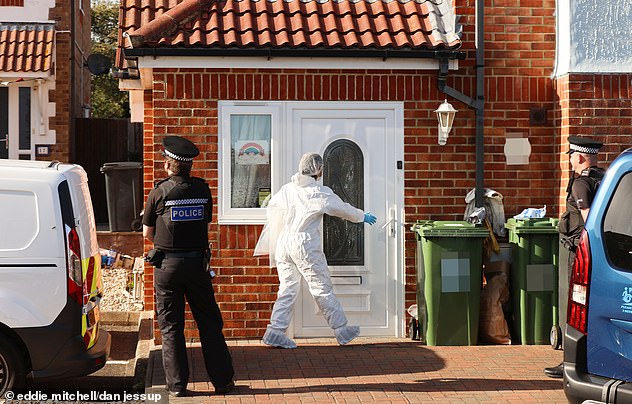 Ms Hoadley was found dead at the family home (above) in Eastbourne, East Sussex, in July

She added: ‘He said Jackie could have the house and the children’s allowances and he would have the remainder.’

Maureen Robson was friends with Mrs Hoadley her whole life and during a phone call around Easter last year, she had been told the couple were splitting up.

She said: ‘She was very very upset. I was worried about her. Ray had told her he was going to step away from things.

‘With the covid problem, Jackie knew she wouldn’t be able to cope on her own.’

Mrs Robson added: ‘I gathered it was because he wanted to not look after the children any more.

‘From what she said, he wanted to step away and continue with his life.’

Up to 30% Londoners may have already caught coronavirus, data shows

Developer who bought Portland Red House says he is open to listening to proposals...

Up to 30% Londoners may have already caught coronavirus, data shows

Kevin Bacon plays father staying in house haunting him with the...