That’s net on! Rural areas could be stuck with slow broadband speeds for YEARS due to a string of failures, MPs warn

By Paul Revoir Media Editor For The Daily Mail

Rural areas may be stuck with slow broadband for years to come due to official failures, say MPs.

The Public Accounts Committee blasted the Department for Digital, Culture, Media and Sport for reneging on a 2019 Tory election pledge to achieve gigabit-speed broadband everywhere by 2025.

This target was revised downwards in November with a new aim of gigabit speed covering at least 85 per cent of the country.

Rural areas may be stuck with slow broadband for years to come due to official failures, say MPs (stock image)

Committee head Meg Hillier MP said the promises were ‘slipping’ due to a ‘litany of planning and implementation failures’.

But a DCMS spokesman said the report was inaccurate. One in three households now had gigabit speed and Britain was rolling it out faster than comparable nations.

The report said: ‘We are increasingly concerned that those in rural areas may have to pay more and may reach gigabit broadband speeds late.’

It added: ‘Given the impact of Covid-19, the department must do more to protect those with limited access to the internet.

‘We remain unconvinced that if and when rural users finally do get gigabit broadband, they will enjoy the same choice of service provider and the same protections as their urban counterparts.’

The MPs also pointed to the Government’s decision not to allocate three-quarters of a £5 billion programme, to subsidise gigabit rollout to the hardest to reach, until after 2024-25. 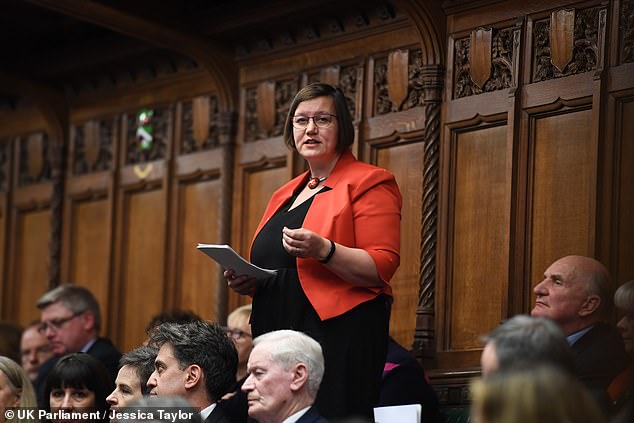 The committee also said there was a ‘risk that the very hardest to reach premises will be struggling with slow broadband for many years to come’.

The committee said it was concerned that a reduced target of 85% for gigabit coverge will still be challenging to meet.

It warned many consumers, particularly in rural and remote areas, may have to wait ‘well beyond 2025 for gigabit broadband speeds and may not even get superfast speeds before then’.

MPs pointed out that 1.6 million UK premises, mostly in rural areas, ‘cannot yet access superfast speeds’ as the Government focuses on ‘upgrading’ the connectivity again.

It said the department had failed to demonstrate it had learned lessons from the superfast programme for the new gigabit roll-out.

The report expressed concerns that in the event of delays to its programme, the department might ‘look to deliver to as many premises as possible in a bid to meet its ambitious timetable’ with those who currently lack superfast broadband, once more going ‘to the back of the queue’.

One in six hospital patients caught Covid-19 while being treated for other illnesses, figures show

Fossils: Neanderthal who fell down a well and starved to death 130,000 years ago had buck teeth

Bank Holiday booze-up! Revellers brave the cold for a night on the tiles

One in six hospital patients caught Covid-19 while being treated for...