The number of journeys being made on foot, by car and on public transport during England’s third lockdown is still significantly higher than in the first – but much lower than during the second, figures revealed today.

The latest mobility data has shown pedestrians, motorists and people using trains or buses are moving around more again across seven major UK cities after levels fell over the Christmas and New Year period.

It comes as many self-employed workers continue to visit homes to provide services allowed under law, such as nannies, cleaners, tradespeople and social care workers providing support to children and families.

The figures from Apple, based on requests for directions using its Maps app, show the UK average level based on a pre-pandemic baseline of January 2020 is 30 per cent down for walking – roughly where it was in mid-December.

The data also reveals walking levels are significantly lower in London than any other major UK city at 52 per cent down – far below Sheffield at 13 per cent, Leeds at 17 per cent and Manchester and Birmingham, both 22 per cent.

However the gap when considering public transport is much smaller, with this down 67 per cent in London compared to 64 per cent in Manchester, 69 per cent in Sheffield and 58 per cent in Birmingham and Liverpool.

Meanwhile rush-hour congestion in London this morning was at its highest level since England’s third national lockdown began as concerns grow that Britons are not complying with lockdown rules closely enough.

This graphic based on Apple mobility data shows how of journeys being made on foot, by car and on public transport during England’s third lockdown is still significantly higher than in the first lockdown – but much lower than in the second lockdown 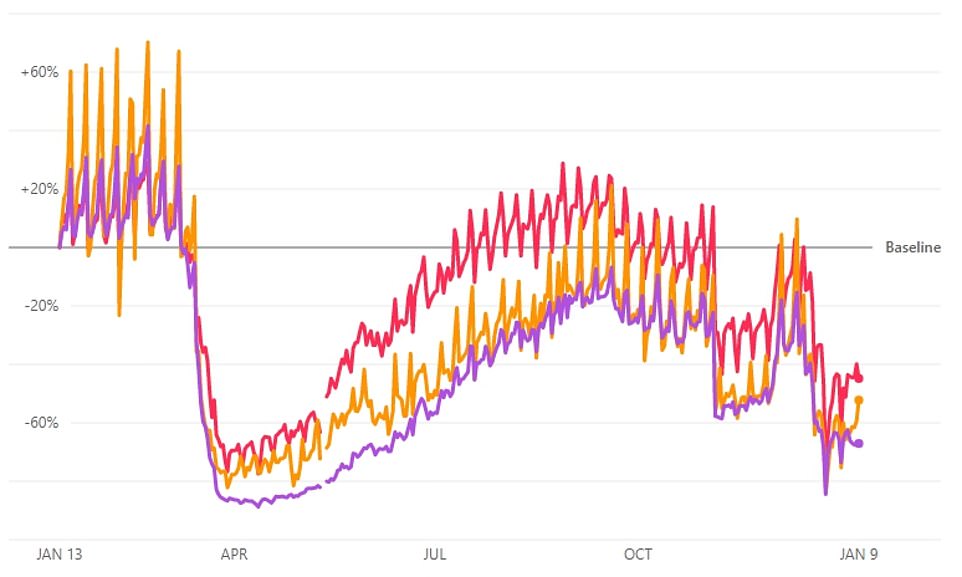 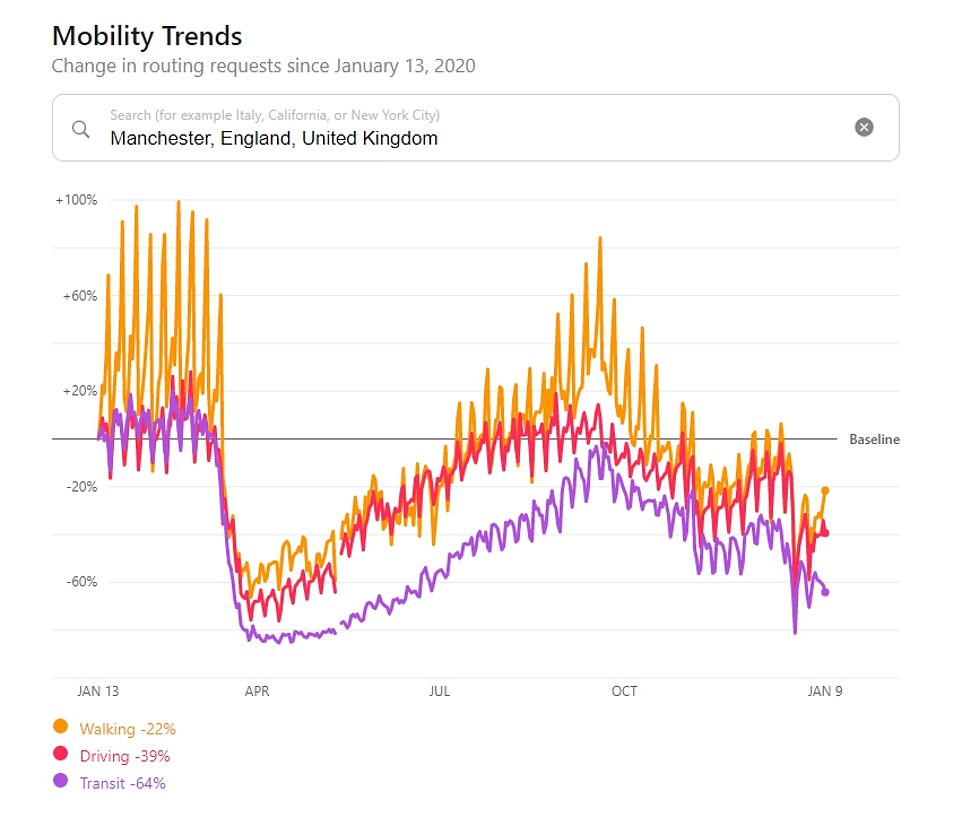 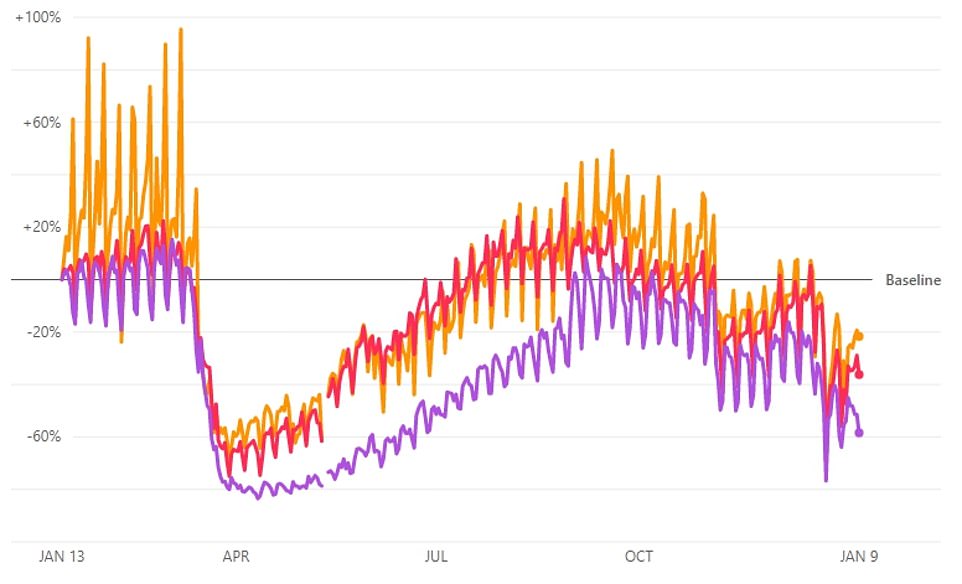 Congestion on London’s roads today was at 25 per cent at 7am and 27 per cent at 8am – with both levels much higher than on any morning last week, following the introduction of the new lockdown on Monday night.

People are allowed to continue working in other people’s homes during the third national lockdown in England if they fit into a category set out under law.

Those who are allowed to do so include nannies, cleaners, tradespeople and social care workers providing support to children and families.

But guidance also states that work should not take place in a private home or garden when it does not need to.

In addition, guidance says that tradesmen who are allowed to continue working includes – but is not limited to – people working in repair services, fitters, meter readers, plumbers and surveyors.

During the first lockdown, there had been confusion of whether construction workers and tradespeople should count their jobs as essential.

But Michael Gove said at the time that construction workers should still be going to work while tradespeople could attend emergencies in people’s homes.

And as the weeks went on, people became happier to invite workmen into their home – especially with many furloughed and therefore looking to spend their time at home carrying out home improvements.

However, the levels for both times were still less than half the average figures in 2019 for the period, which were 52 per cent for 7am and 63 per cent for 8am.

Data on London Underground and bus use for today is not yet available, but Transport for London last week revealed that travel in the capital was running at more than double the level in the first lockdown last year.

London Mayor Sadiq Khan formally declared a ‘major incident’ in the capital last Friday – and called for restrictions to be toughened, saying that coronavirus was ‘out of control’ and threatened to ‘overwhelm’ the city’s hospitals.

As for other major UK cities at 8am this morning, congestion in Birmingham was at 23 per cent – which was roughly in line with figures of 19 to 24 per cent during the same time period last week.

It came as the Government said all key workers unable to work from home in England will be eligible for a test twice a week to try to ‘break the chain’ of coronavirus transmission by asymptomatic carriers.

The announcement by Matt Hancock will make lateral flow tests – which take 30 minutes to get a result – a key way to avoid tightening the lockdown. The first million tests will be delivered by the end of this week.

Around one third of the UK workforce are key workers – totalling 10.61million people – and include food manufacturers, warehouse employees and healthcare staff.

Covid-19 has spread most rapidly in London and the South East according to the Office for National Statistics.

Key workers have been calculated to have around 29 daily contacts with other people, seven times as many as someone working from home. Just one in six key workers is able to work from home. 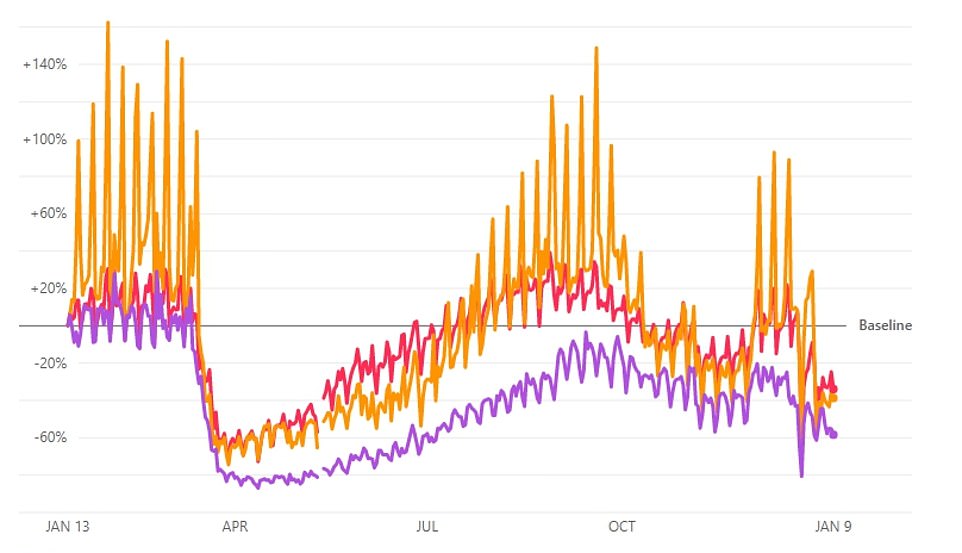 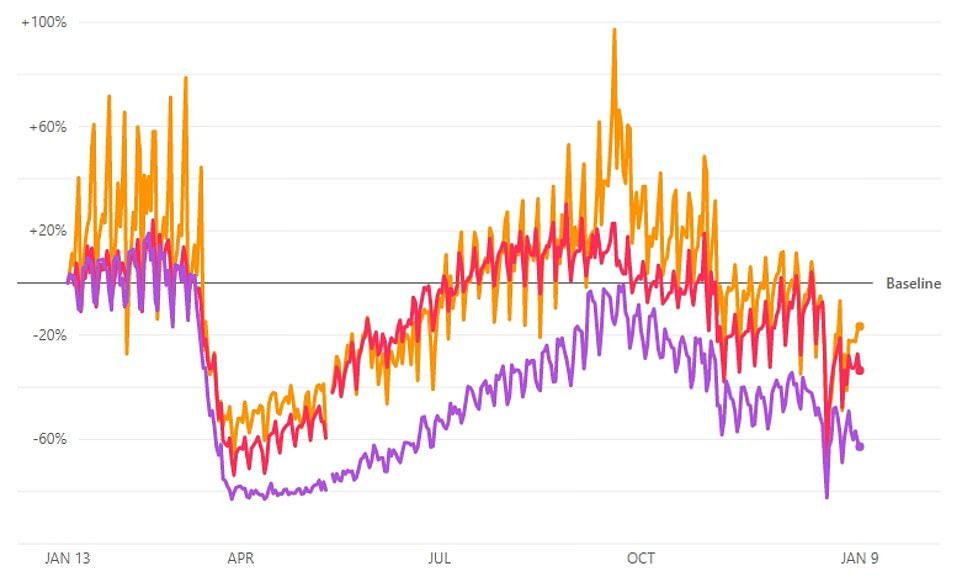 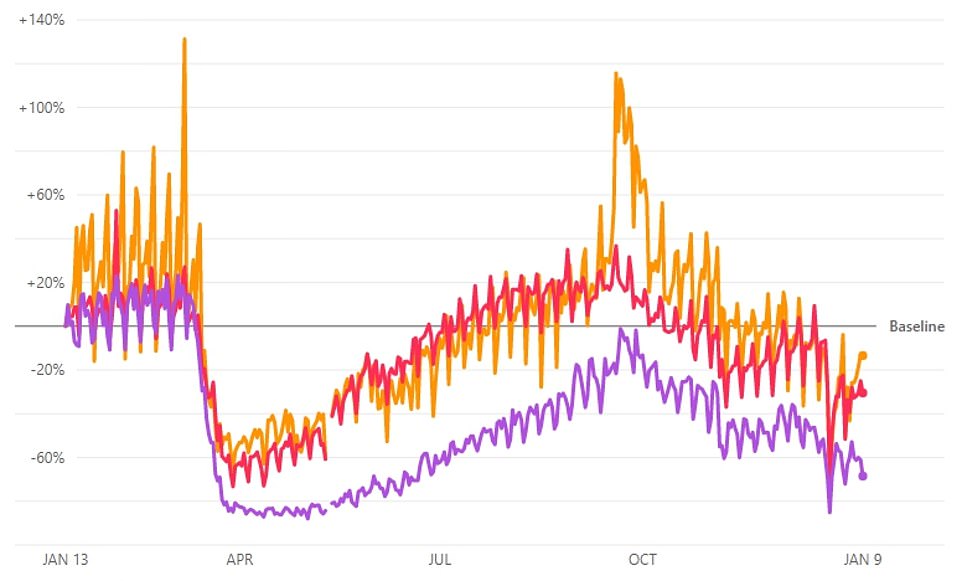 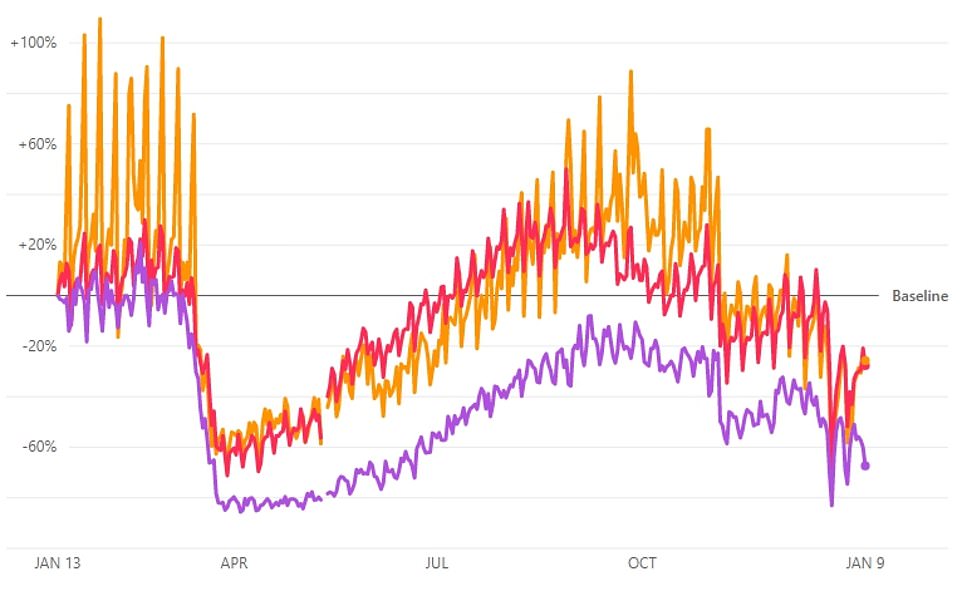 Today, vaccines minister Nadhim Zahawi raised concerns that people are not complying with lockdown rules closely enough in supermarkets and when exercising amid suggestions the restrictions may need to be toughened.

Britain has not yet hit the Covid-19 infection peak, says CMO Chris Whitty

The UK has not yet hit the peak of the current wave of Covid-19 infection, with the next few weeks being ‘the worst’ of the pandemic for the NHS, England’s chief medical officer has warned.

Professor Chris Whitty said the vaccine rollout offered hope that lockdown restrictions could be lifted in the coming months, but described the current UK death rate as ‘appalling’.

During a BBC phone-in on the current high case rates, he said: ‘I don’t think we’re yet at the peak, I’m afraid.

‘I think we will be at the peak if everybody can double down and absolutely minimise their contacts.

‘The point of the lockdown is to bring that forward, but it only works if everyone really thinks about every individual interaction they have and try and minimise them.’

Prof Whitty said the the new variant of coronavirus was causing a ‘significant problem’, telling BBC Breakfast: ‘We will get through together, but at this point in time we’re at the worst point in the epidemic for the UK.’

Asked if coronavirus is being spread outdoors, Prof Whitty said the risks were much lower than for indoors, but said problems could occur if people gathered in groups, such as huddled round a market stall.

It comes as Prime Minister Boris Johnson has reportedly discussed the prospect of introducing tougher controls to ensure the public abide by the restrictions, such as stopping people exercising with one other person.

As the Government launched a drive to ensure the public abide by the coronavirus rules, Mr Zahawi said he is worried that social interactions are taking place in parks under the cover of exercise and masks are not being worn inside shops, which may be becoming too crowded.

England’s chief medical officer Professor Chris Whitty urged the public to ‘stay at home unless you absolutely have to’ as the next few weeks will be ‘worst weeks of the pandemic’.

Prime Minister Boris Johnson is said to have discussed the prospect of introducing tougher controls to ensure the public abide by the restrictions, with the new highly-contagious variant raising the stakes.

As mass vaccination sites opened today, Mr Zahawi was unable to assure that the current restrictions are sufficient and raised concerns of people not complying with the rules.

‘We don’t want to use tougher measures, the lockdown is tough, schools are shut, but it is important to remember this virus loves social interactions,’ he told BBC Radio 4’s Today programme.

‘We’re reviewing all the restrictions, but these are pretty tough at the moment. I am worried about supermarkets and people actually wearing masks and following the one-way system and making sure when it’s at capacity they wait outside the supermarket.

‘I’m worried about some of the pictures I’ve seen of social interactions in parks, if you have to exercise you can go out for exercise only.’

Health Secretary Matt Hancock has warned that ‘every flex can be fatal’ as he backed more stringent enforcement of the lockdown by police yesterday.

A Government source has been quoted as suggesting restrictions on exercise could be tightened while expressing concerns that people are using the allowance to socialise.

Mr Whitty said that the ‘new variant undoubtedly makes every situation slightly more dangerous than it was’, but that the risk outdoors ‘remains low’ providing the rules are followed.

‘It still remains the case that it’s much lower transmission outdoors provided people keep their distance,’ he told Today.

‘If people for example are crowded together in a queue outdoors, if they’re really huddled together round a market stall or something that is a risk with this virus and in that situation there might be some logic to people thinking about wearing masks.’ 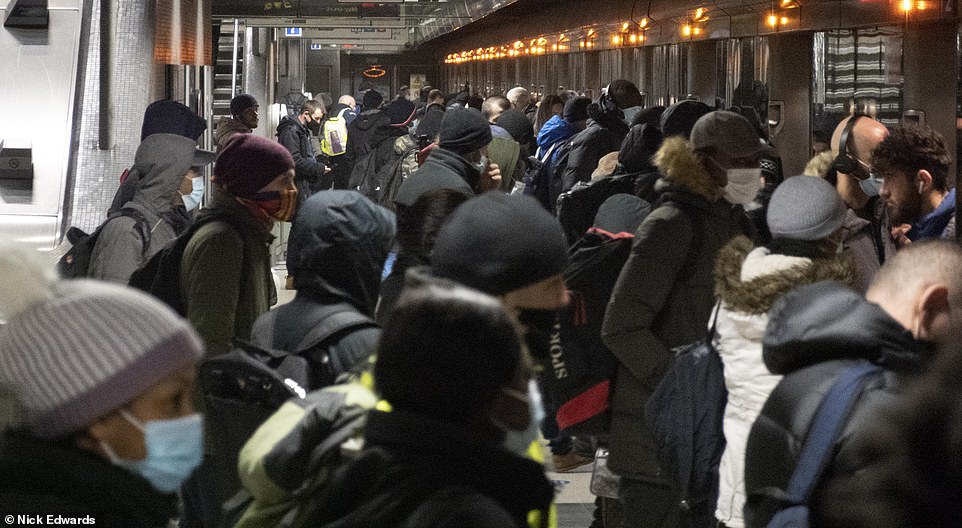 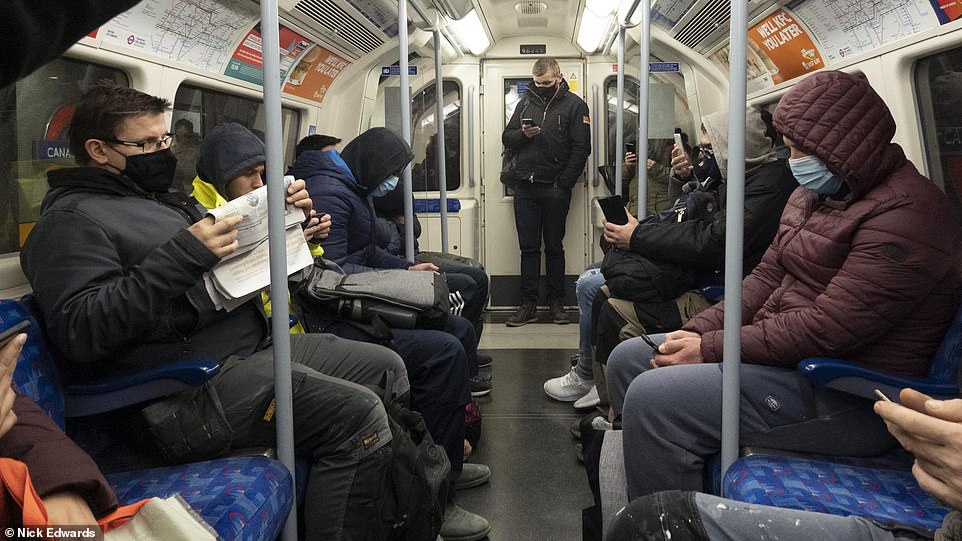 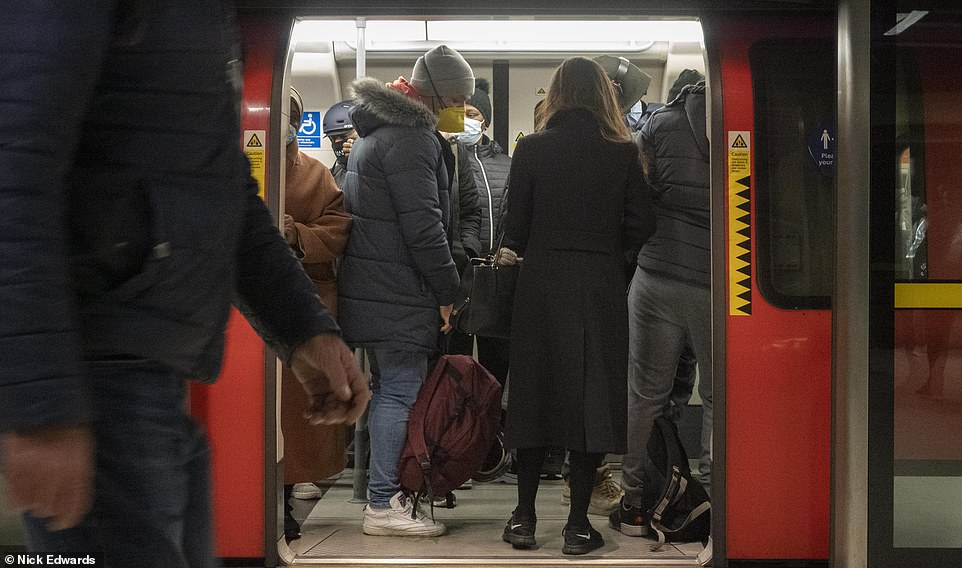 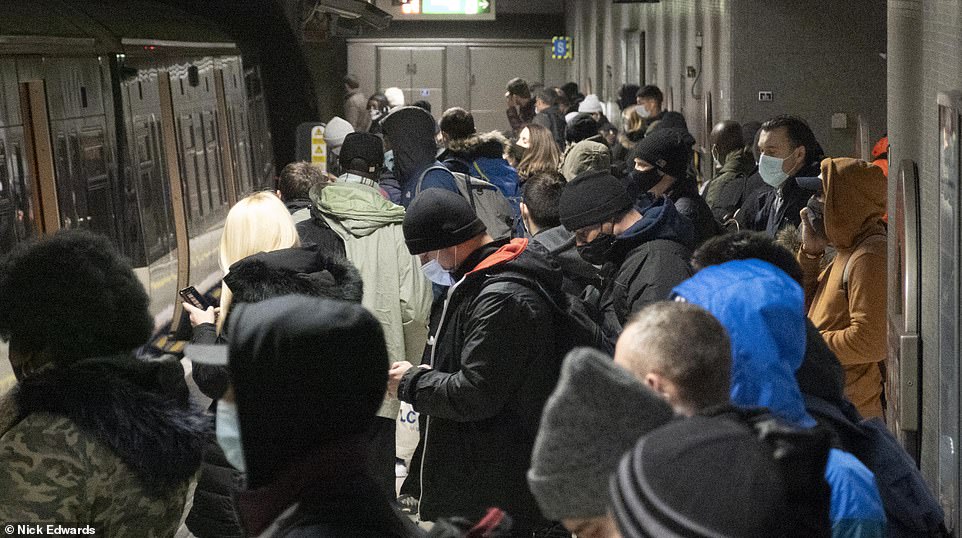 The majority of outbreaks examined by Public Health England last week came from care homes, where 749 incidents were recorded.

A total of 166 came from workplaces, 79 from hospitals, 33 were from educational settings such as schools and 11 were from food outlets. Some 257 incidents were recorded as being from other settings.

Devon and Cornwall Police deputy chief constable Paul Netherton warned that people are getting ‘fed up’ of lockdown restrictions and compliance has dropped. 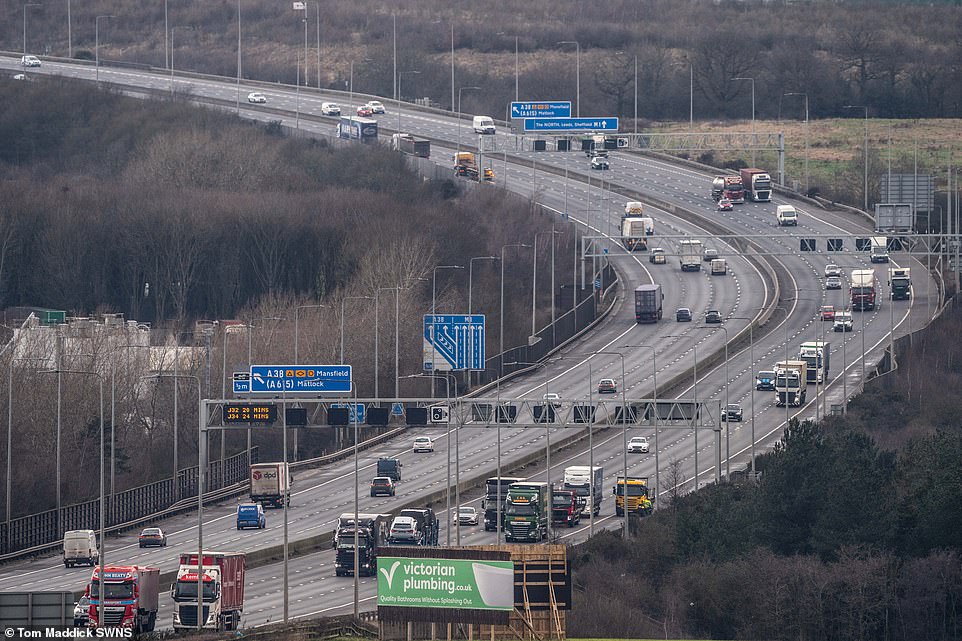 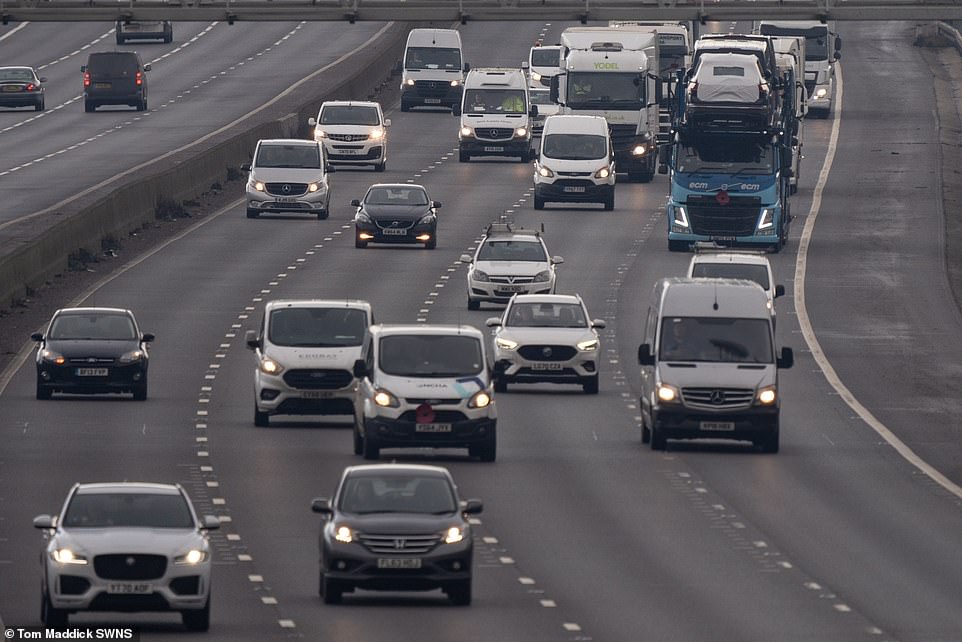 Lorries, vans and cars are driven along the M1 in Nottinghamshire this morning as the third lockdown for England continues 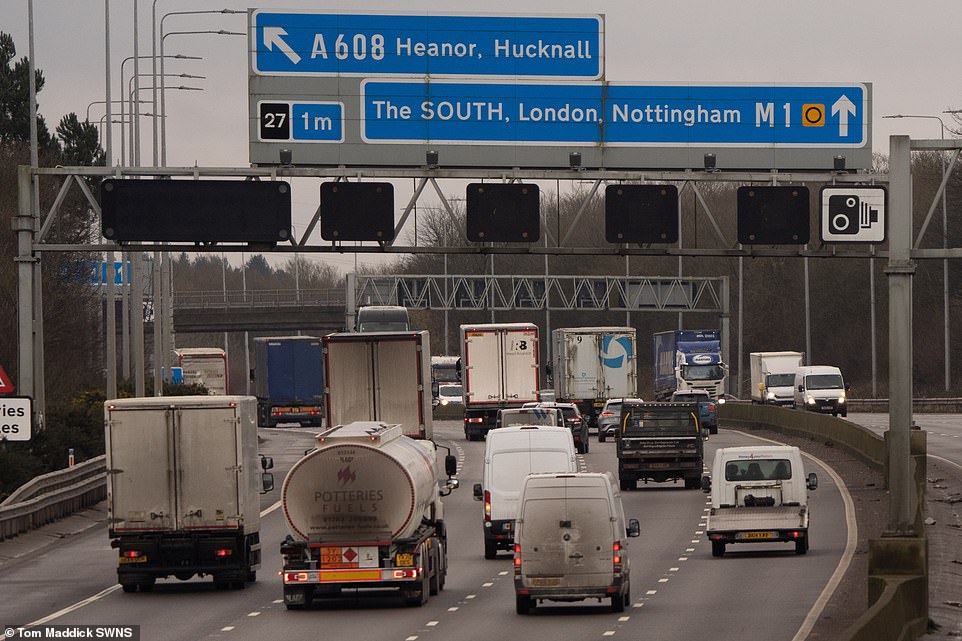 When asked whether it was harder to get people to comply with rules in the current lockdown compared to the previous two, he said: ‘Yes, I think people are beginning to get fed up with it.

‘I can understand that but we have to be firm, we have to save lives, we have to make sure people are keeping apart, isolating and staying at home.’

Some experts have said the current lockdown measures are not strict enough, in the face of the more transmissible variant which has spread rapidly in many parts of the country.

Professor Peter Horby, who chairs the Government’s new and emerging respiratory virus threats advisory group (Nervtag), said the Kent variant has made the situation ‘more risky’ and ‘we’re going to have to be even stricter’ if the infection rate does not decrease.

ID tags of children, aged 6 to 12, who were murdered are discovered Sobibor Nazi death camp

Socialite Maureen Boyce’s former lover is convicted of her murder a...